In 1997, the Arizona State Board of Education adopted rules for teacher certification called the Arizona Educator Proficiency Assessments (AEPA). Arizona teaching candidates must pass a test of professional knowledge to ensure that they have the necessary knowledge and skills to give Arizona students a quality education. The AEPA Political Science/American Government Examination is criterion referenced and objective based. Prospective teachers who want to teach Political Science and American Government will be tested in three areas. 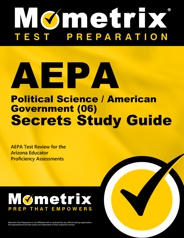 About 21% of the examination will cover Political Science and American Government Concepts and Skills. This portion of the test covers science terms, concepts, and theories. It also covers understanding methods for locating, gathering, and organizing social science information. This section will also cover applying methods for evaluating and interpreting social science information. In addition, this section covers how to frame questions, analyzing and synthesizing information, making generalizations, and reaching and communicating valid conclusions.

The next section covers Political Thought, Comparative Government, and International Relations which takes up about 21% of the questions. For this part of the test you will need to study the history of political thought through the modern era, various governmental systems, and the nature of diplomacy and the role of international organizations.

You can also expect to see about 58% of the questions on the United States and Arizona Government. This part of the examination covers the historical development of government in the United States, the U.S. Constitution, and the structure, organization, and operation of the federal government. You will also need to study the relationship of government of the U.S. economic system, the development of political parties in the U.S., and the election process in the U.S. 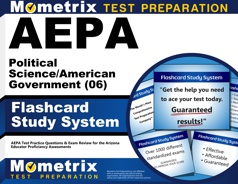 Additionally, it covers the role of political culture, public opinion, other media in U.S. politics, and the state and local government in the U.S., U.S. citizenship, basics of democratic government, state government, and government of American Indian nations in Arizona. Mometrix carefully prepared the AEPA Political Science/American Government Study Guide for use along with other resources to help you study. It will also help you to use the AEPA Political Science/ American Government Practice Test, which has similar questions to those you will see on your computer-based test of 100 selected response questions.

Mometrix Academy is a completely free resource provided by Mometrix Test Preparation. If you find benefit from our efforts here, check out our premium quality AEPA Political Science/American Government study guide to take your studying to the next level. Just click the AEPA Political Science/American Government study guide link below. Your purchase also helps us make even more great, free content for test-takers.