Hi, and welcome to this video covering the least common multiple and the greatest common factor!

As you know, there are times when we have to algebraically “adjust” how a number or an equation appears in order to proceed with our math work. We can use the greatest common factor and the least common multiple to do this. The greatest common factor (GCF) is the largest number that is a factor of two or more numbers, and the least common multiple (LCM) is the smallest number that is a multiple of two or more numbers.

To see how these concepts are useful, let’s look at adding fractions. Before we can add fractions, we have to make sure the denominators are the same by creating an equivalent fraction:

In this example, the least common multiple of 3 and 6 must be determined. In other words, “What is the smallest number that both 3 and 6 can divide into evenly?” With a little thought, we realize that 6 is the least common multiple, because 6 divided by 3 is 2 and 6 divided by 6 is 1. The fraction \(\frac{2}{3}\) is then adjusted to the equivalent fraction \(\frac{4}{6}\) by multiplying both the numerator and denominator by 2. Now the two fractions with common denominators can be added for a final value of \(\frac{5}{6}\).

In general, you need to determine a number larger than or equal to two or more numbers to find their least common multiple.

It is important to note that there is more than one way to determine the least common multiple. One way is to simply list all the multiples of the values in question and select the smallest shared value, as seen here:

This illustrates that the least common multiple of 8, 4, and 6 is 24 because it is the smallest number that 8, 4, and 6 can all divide into evenly.

Another common method involves the prime factorization of each value. Remember, a prime number is only divisible by 1 and itself.

Once the prime factors are determined, list the shared factors once, and then multiply them by the other remaining prime factors. The result is the least common multiple:

Divide the numbers by the factors of any of the three numbers. 6 has a factor of 2, so let’s use 2. Nine and 3 cannot be divided by 2, so we’ll just rewrite 9 and 3 here. Repeat this process until all of the numbers are reduced to 1. Then, multiply all of the factors together to get the least common multiple.

Now that methods for finding least common multiples have been introduced, we’ll need to change our mindset to finding the greatest common factor of two or more numbers. We will be identifying a value smaller than or equal to the numbers being considered. In other words, ask yourself, “What is the largest value that divides both of these numbers?” Understanding this concept is essential for dividing and factoring polynomials.

What is the greatest common factor? 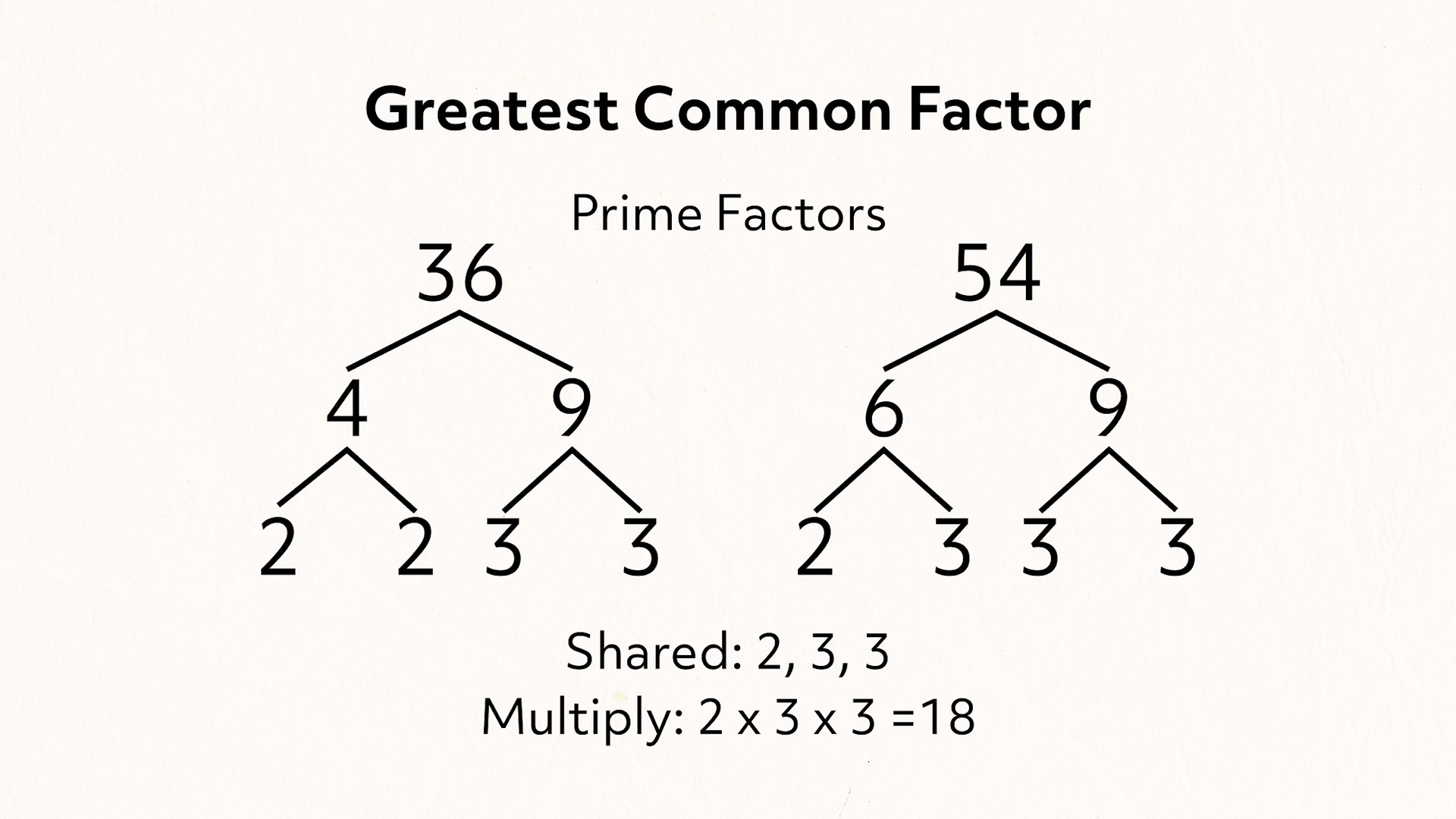 Let’s wrap up with a couple of true or false review questions:

The answer is false.

2. The least common multiple is a number greater than or equal to the numbers being considered.

The answer is true.

How do you find the LCM and GCF?

There are a variety of techniques for finding the LCM and GCF. The two most common strategies involve making a list, or using the prime factorization.

For larger numbers, it will not be realistic to make a list of factors or multiples to identify the GCF or LCM. For large numbers, it is most efficient to use the prime factorization technique.

The prime factorization approach can seem like a fairly lengthy process, but when working with large numbers it is guaranteed to be a time-saver.

How do you find the GCF?

There are two main strategies for finding the GCF: Listing the factors, or using the prime factorization.

Listing the factors of each number and then identifying the largest factor in common works well for small numbers. However, when finding the GCF of very large numbers it is more efficient to use the prime factorization approach.

What does GCF mean?

How do you find the lowest common multiple?

Listing the multiples is a great strategy when the numbers are fairly small. When numbers are large, such as \(38\) and \(42\), we should use the prime factorization approach. Start by listing the prime factorization of each number (this can be done using a factor tree).
\(38\): \(2\times19\)
\(42\): \(2\times3\times7\)
Now circle the shared factors (only count these once).

How do you take out the LCM? 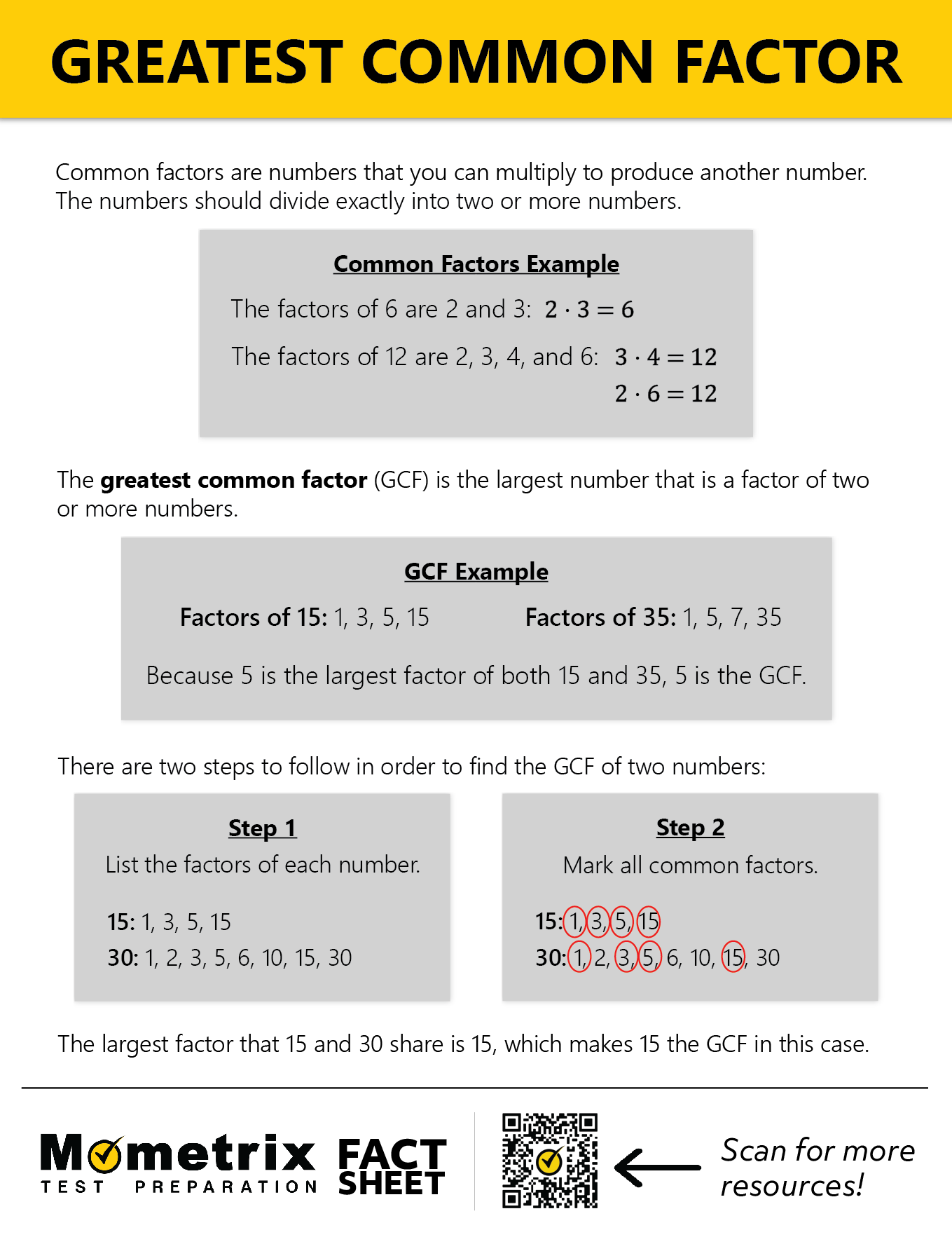 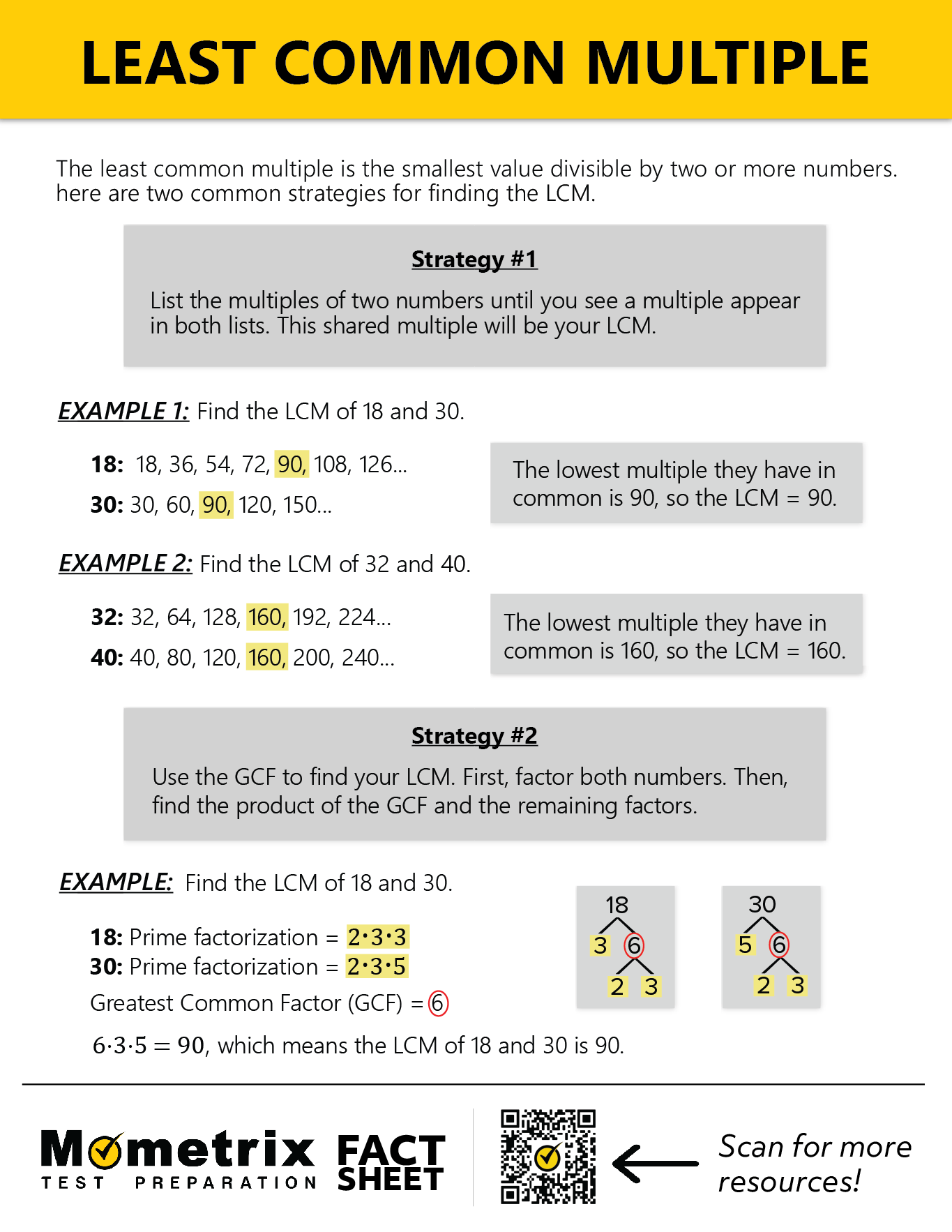 GCF is 1, and we cannot reduce any further.

Remember, when calculating the LCM of two or more numbers, we list each prime factor once that is shared by all of the numbers. Since each of our numbers has 2 as a prime factor, our LCM will also have 2 as one of its prime factors.
LCM \(=2\times\) _______

Notice that even though 2, 6, and 8 are all factors of 48, the solution is not D, because 48 is not the smallest common multiple.

List the first several multiples of 3, 5, and 6 to find the least common multiple.

As we see above, 30 is the first (least) number that 3, 5, and 6 have in common among their multiples, so the least common multiple is 30.

Courtney has 54 pieces of candy, and Trish has 36. They want to prepare goodie bags of candy for their friend Kim’s birthday party, but each bag needs to have an equal amount of candy. In order to have the most candy in each bag, with Courtney and Trish working separately, how many bags can they make, and how much candy will be in each bag?

The correct answer is D: 5 bags, with 18 pieces of candy in each.

The correct answer is C: 12 apples and 12 bananas.

Sara will buy three bags of apples and two bunches of bananas in order to have 12 of each fruit.