Hey guys, welcome to this video over spring and neap tides.

First, let’s give a formal definition of a tide, and then we will look, more specifically, at spring and neap tides.

The word “tide” refers to when the moon and sun’s gravitational attraction cause sea levels to rise and fall. So, the moon’s gravitational force literally works to pull on the Earth’s surface and all its oceans with various levels of strength.

The moon rotates around the Earth, and it takes the moon approximately 27.32 days for the moon to make a full rotation. Well, the Earth makes a full rotation on its axis in about 24 hours (23hrs and 56mins to be exact). So, as you can tell, the Earth is rotating on its axis much faster than the moon is rotating around the Earth. This information is very important and helps us to understand tides better, more specifically when we get into the topic of super tides (or spring and neap tides).

From the Earth, it looks like the moon is not moving at all, but this is not the case; it is just moving much slower than the Earth. It is in fact moving though, and like we’ve already mentioned it takes about a month for the moon to make a complete orbit around the Earth. Well, the moon orbiting makes some stuff happen on Earth. So, let’s take a look at what is going on, but to do that we have to bring in our big friend, the sun.

So, the moon starts out directly in front of the sun. From Earth it looks like the moon is invisible, because the light is shining on the opposite side of the moon, the part that we can’t see. When the Earth, moon, and sun are directly aligned like this something happens. Spring Tides. I already mentioned that distance lessens gravitational pull. Well, the sun is so far away from the Earth that the Earth only experiences half the gravitational pull from the sun as it does from the moon. However, when the sun and moon line up with one another their gravitational attractions combine, causing high tides to be even higher; and again, these are called spring tides.

Well, about three days into the moon’s orbit we are able to see a little sliver of moon. This is because of the way the light from the sun hits the moon while in this position. This phase is called crescent moon. At this point the water is receding and about to be pulled back for a low tide.

When the moon reaches first quarter, in about 7 days, you can see that the Sun, Earth, and moon form a 90-degree angle. When this right angle is formed, the bulges from the ocean cancel each other out. So, the regular high tides and low tides become significantly lower. This is known as a neap tide; they are very weak tides.

The moon continues to orbit the Earth. About 7 more days, after first quarter, it reaches full moon. At this point, the sun, Earth, and moon are lined up again creating another spring tide.

The moon continues on until it reaches last quarter. This occurs about 7 more days after full moon. At this point we can see, again, that the Earth, moon, and sun form a right angle causing the bulges in the oceans to cancel each other out. So, we see another neap tide.

The moon then rotates back to the new moon position. Starting this cycle all over again.

This is pretty cool stuff. Now, you can walk outside at night, and based on the shape of the moon you can tell what is going on in the ocean.

Remember, spring tides occur when the sun, moon, and Earth are lined up, and this causes regular high tides and low tides to be much higher.

Neap tides occur when the sun, moon, and Earth form a right angle, and this causes the regular high tides and low tides to become much lower than usual. A neap tide will always come about seven days after a spring tide. 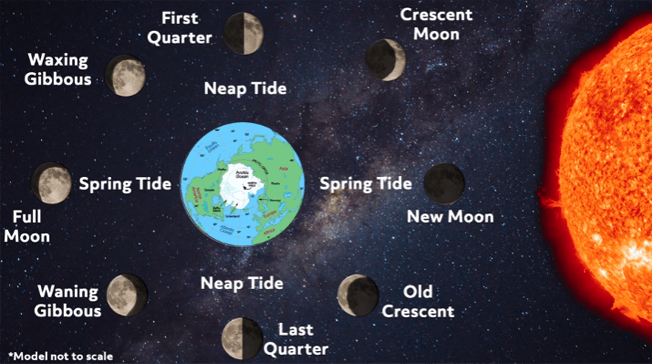 I hope that this video has been helpful.

If you enjoyed it then be sure to give us a thumbs up, and subscribe to our channel for further videos.