Hi, and welcome to this review of photosynthesis! Today we’ll be looking at exactly how this process works and talk about why photosynthesis is so important to plants and animals alike.

So what exactly is photosynthesis? It’s the process of converting carbon dioxide from the atmosphere, water, and sunlight into glucose and oxygen.


If this looks familiar, that’s because it’s the reverse reaction of cellular respiration in animals. This is no coincidence either. Plants will undergo photosynthesis to generate glucose as a food source for themselves. Through this process, plants remove large amounts of carbon dioxide from the atmosphere and produce oxygen as a byproduct, which many organisms require. Since animals cannot produce their own energy, they undergo the process of cellular respiration using glucose and oxygen to eventually produce a different form of energy, known as ATP.

Let’s take a closer look and see what’s happening on the cellular level. The primary site of photosynthesis occurs in the mesophyll, which are the cells within a middle layer of leaf tissue. Each mesophyll cell contains chloroplasts, which have unique structures within it such as stacks of pancake-like structures called thylakoids. Each of those stacks of thylakoid membranes are called a granum and are really small, about 0.3 micrometers in height. The grana are surrounded by a cytoplasm-filled space called the stroma. The stroma contains everything the chloroplast will need to undergo photosynthesis.

We can divide photosynthesis into two parts: a light-dependent phase that occurs first, and a light-independent phase that occurs last. Light-dependent reactions require large sums of light energy to produce two compounds, ATP and NADPH, which are needed for the next step of photosynthesis. More specifically, light is absorbed by photosystems, or large complexes of proteins and pigments that help collect light energy and are located in the thylakoid membrane. Light is first absorbed in photosystem II (PSII) and energy is transferred to the reaction center, P680, where it then boosts an electron to a high energy level. PSII gets electrons from the process of photolysis, where water is split into oxygen and proton (H+) ions. As the high energy electron travels down the electron transport chain towards the next photosystem, photosystem I (PSI), it is losing energy. Once the electron arrives at PSI and more light energy is absorbed, the electron is boosted to a high energy level, with the help of the reaction center, P700. The electron then travels along the electron transport chain converting NADP+ to NADPH, which acts as the energy electron carrier. As electrons move down the chain, they generate a proton motive force, or a high concentration of protons in the thylakoid lumen. These protons will eventually be used by the enzyme ATP synthase to generate ATP molecules for starch synthesis. Remember, the purpose of the light-dependent phase is to produce both ATP and NADPH. 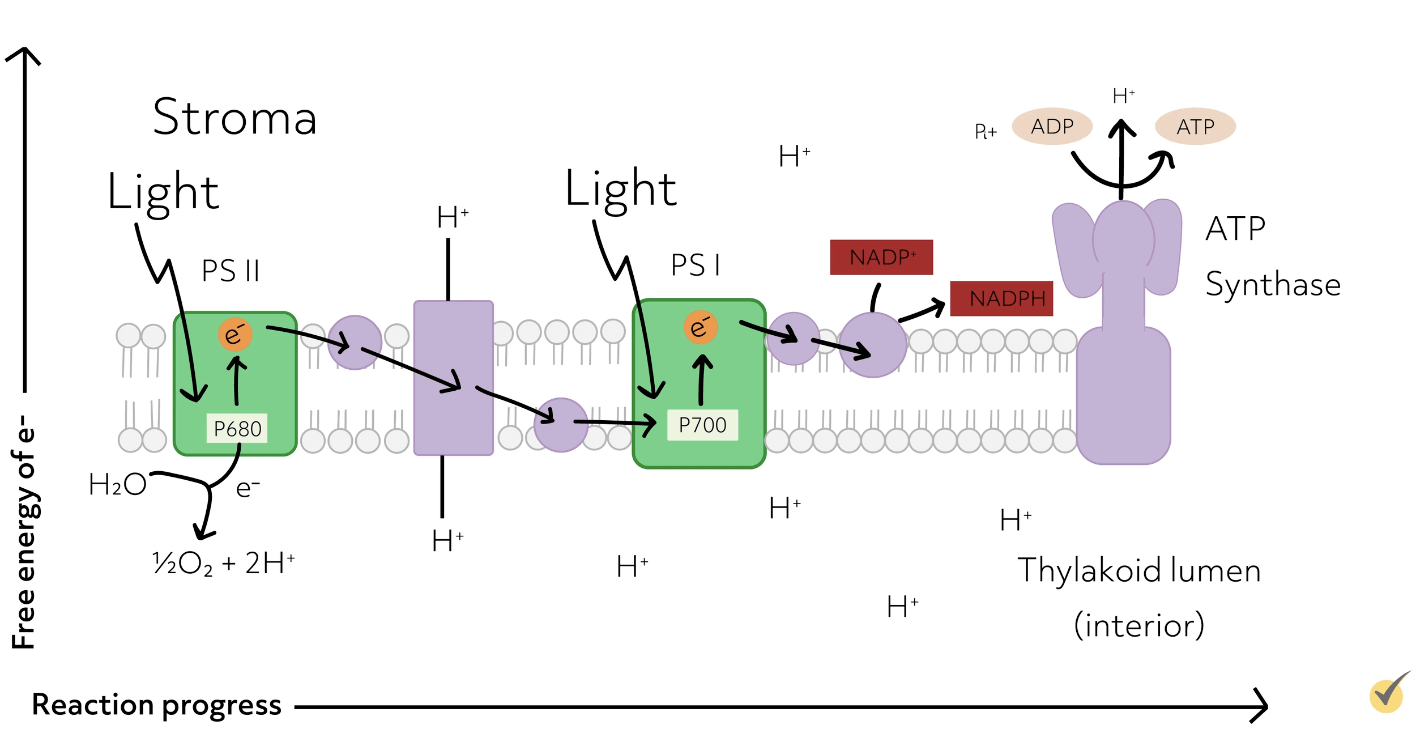 Let’s talk about the second phase that is especially unique to photosynthesis.

Phase two of photosynthesis takes place in the stroma and is called the light-independent reaction, because, unlike phase one, it doesn’t directly require sunlight to occur. During this phase, also known as the Calvin cycle, the NADPH and ATP generated during the light-dependent reaction are used to make a three-carbon sugar, glyceraldehyde 3-phosphate (G3P) that can later be used to make glucose. During carbon fixation, a carbon dioxide molecule combines with ribulose 1,5-biphosphate (RuBP) that is catalyzed with the enzyme rubisco. RuBP splits into 2 molecules of 3-phosphoglyceric acid (3-PGA). 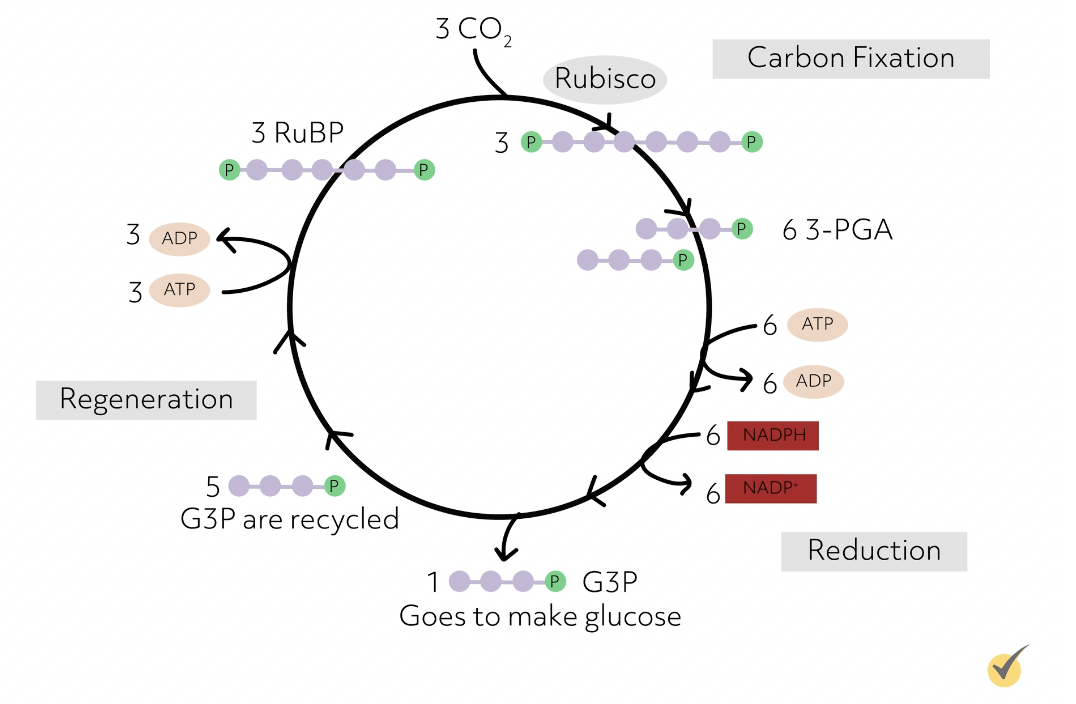 From here, ATP and NADPH convert the 3-PGA molecules into G3P. Some G3P is converted into glucose while other G3P molecules are recycled to regenerate the RuBP molecules we encountered at the beginning of the cycle. The glucose can act as that food source, or it can be stored as a polysaccharide like starch or cellulose for later use by the plant.

There we go! That’s the whole process of how plants use photosynthesis. Before we go, let’s look at a review question:

What specific kind of reaction occurs during the light-dependent stage of photosynthesis between water and NADP+?

That’s all for this review of photosynthesis! Thanks for watching, and happy studying!