Difference Between Plant and Animal Cells

Hi, and welcome to this video on the similarities and differences between plant and animal cells!

To start off, let’s look at the cells’ size and structure.

Let’s talk about some organelles that both plant and animal cells share by starting from the center and working our way out.

We already mentioned that both cell types have a nucleus that stores the cell’s genetic information. The nucleus is surrounded by a porous bilayer membrane called the nuclear envelope that selectively allows proteins and DNA in and out of the nucleus.

The nucleus is surrounded by the rough and smooth endoplasmic reticulum in both types of cells.

The rough ER is “rough” only because it harbors another type of organelle called ribosomes that act as sites for protein synthesis. The cell can use these proteins for carrying out genetic processes, sending signals, and for providing structural support for the cell.

Smooth ER contains enzymes that processes lipids, or fats, for cell use.

Both cell types also contain the Golgi apparatus, which is responsible for modifying and sorting all kinds of proteins from the rough ER. We can think of this like a shipping and receiving center for mailing packages. From here, modified proteins will be packaged into secretory vesicles which bud from the Golgi and are then shipped within the cell or exported/transported outside of the cell. We call these buds “secretory vesicles,” and both cell types have them.

Both cell types also have peroxisomes in the cytoplasm that break down fatty acid chains, and lysosomes that help break down other molecules so that they can be recycled and reused throughout the cell.

The last common organelle between plants and animals is mitochondria. Mitochondria are responsible for energy metabolism by generating ATP. We’ll talk more about that a little bit later.

Alright, we’ve made it to the outskirts of the cell! Although the cell membrane isn’t really an organelle, it is the last similar physical feature of plant and animal cells. Just like the nucleus, both cell types are surrounded by a membrane that’s known as a phospholipid bilayer. 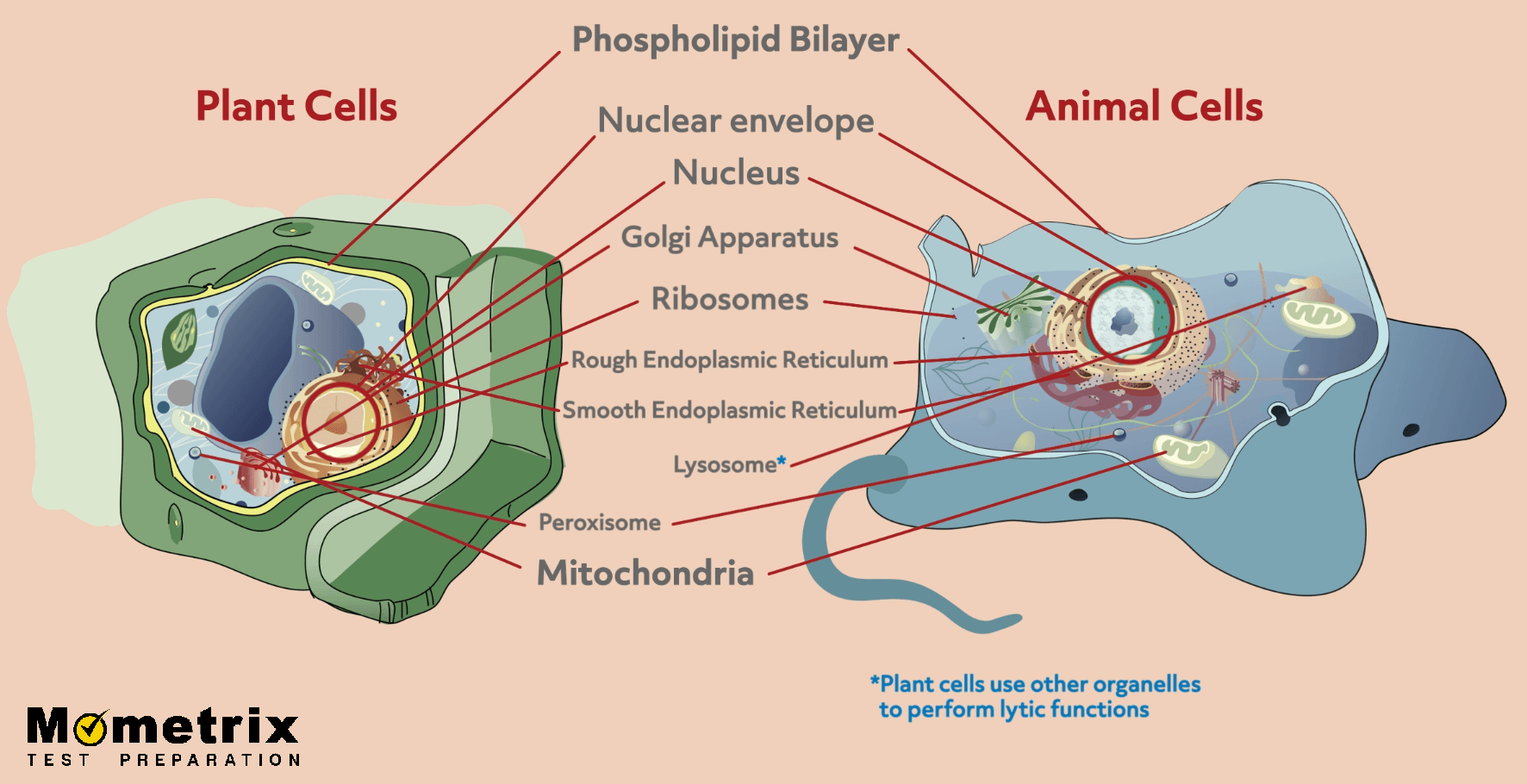 Now that we’ve gone over some physical similarities, let’s talk about some differences.

Difference between Plant and Animal Cells

Most notably, the cell membrane of a plant cell is surrounded by a cell wall that makes it rigid and helps the plant keep its form. The cell wall is also important because it has cell junction sites called plasmodesmata that connect one plant cell to another. Animal cells have a similar feature called desmosomes.

In terms of organelles, plant cells have a few unique components. Chloroplasts are probably the first thing we think of when we think about what makes plant cells unique. Chloroplasts are the site of photosynthesis where the sunlight, carbon dioxide, and water are turned into energy for the cell to use. Another distinct organelle to plant cells is the vacuole. Vacuoles usually take up a large part of the available space in the cell because they store water and other nutrients for the cell to use. If water is scarce, the vacuole will contract and the overall cell size will shrink as well. Animal cell size varies a lot depending on the tissue type, but overall, animal cells are smaller than plant cells.

Now that we’ve gone over the similarities and differences of both cell types in terms of their structure, components, and size, let’s talk about how each cell type metabolizes energy.

Both cell types directly or indirectly need light for producing energy. Plant cells and animal cells both need energy to carry out cellular processes, but they metabolize energy in different ways.

Like I mentioned before, plant cells use a process called photosynthesis, which occurs in chloroplasts, to convert carbon dioxide, water, and sunlight directly from the atmosphere into usable energy in the form of glucose. Let’s look at the equation for photosynthesis:

This is a balanced equation for photosynthesis. When we take six carbon dioxide molecules and hydrolyze them with six water molecules and photons from the sun, we get a usable form of energy in the form of the sugar glucose along with six molecules of oxygen that get released into the atmosphere. So when an animal eats a plant, the animal is getting that glucose from the photosynthesis reaction that it can use in its own energy metabolism. This way, animals are indirect consumers of light energy. Animal cells essentially undergo the reverse process.

Animal cells require glucose in order to gain energy in the form of ATP. There are a few processes that animals can use to generate ATP, but the main process is through an oxygen-dependent reaction called cellular respiration.

Cellular respiration is made up of four main processes:

Now that we understand the processes involved to produce energy, let’s look at processes that require energy, such as reproduction. Both plant and animal cells go through similar reproductive processes. Gregor Mendel, the father of modern genetics, used pea plants to understand basic genetic principles about plants, and we’ve since found that these principles apply to animal cells as well.

Also remember that in animals, we have somatic cells that undergo mitosis and sex cells, or gametes, that undergo meiosis. So when we’re talking about mitosis, we are talking about somatic cells only. In short, mitosis is where a diploid cell, or two copies of each chromosome, divides to form two identical diploid daughter cells. Meiosis is a process by which diploid cells undergo meiosis in two stages, meiosis I and meiosis II, resulting in four haploid gametes. Remember, diploid means that the cell has two copies of each chromosome and haploid refers to each cell having only one copy of each chromosome.

Animal cells have gametes that exist as male, meaning they have an X and a Y chromosome, and gametes that exist as female, meaning they have two X chromosomes. We refer to these as sperm for males and eggs for females. Both of these cell types will undergo meiosis I and II to form four haploid cells that will become diploid cells, or zygotes, once fertilized.

For plants, meiosis also occurs in gametes, but it’s not as straightforward. Plant cells alternate generations and therefore have a different cell cycle from animal cells. For plants, there are two generations: sporophytes and gametophytes. This differs based on the type of plant, but in general, most trees and grasses you would see when you look outside your window are in the sporophyte generation, so let’s start there. Sporophytes are diploid cells that will undergo meiosis to produce haploid spores. These spores will then undergo mitosis to form the haploid gametophyte generation. This may seem weird to have haploid cells going through mitosis since we just learned that animal cells have diploid cells that undergo mitosis to form more diploid cells, but remember that the point of mitosis is to produce genetically identical daughter cells, and in both cases, that’s exactly what mitosis does. So we have our haploid gametophytes. The gametophyte will produce gametes for the plant cell which are called sperm and egg that are also haploid like animal cell gametes. Pollen is a good example of the male gametophyte. So when the sperm gametophyte fertilizes the egg gametophyte, it results in a diploid zygote. From here, the zygote can undergo mitosis as usual to form more sporophytes.

Both plant and animal cells generally undergo mitosis and meiosis in similar ways. The main differences between the reproductive processes of plant and animals cells are due to structural differences. Plant cells don’t have centrioles like animal cells do. While centrioles act as an anchoring site to organize microtubules that aid in pulling chromosomes apart during cell division, they are not necessary for cell division to occur. The other main structural difference has to do with the fact that plant cells have a cell wall. During cytokinesis, instead of forming a cleavage furrow like animal cells, plants form a cell plate in the middle of a cell. This plate consists of components from the plasma membrane and cell wall that are delivered in vesicles. However, the big-picture difference between plant and animal cell reproduction has to do with the fact that plant cells have a different life cycle than animal cells.

Alright, now that we’ve fully compared and contrasted plant and animal cells, let’s go over a review question together.

Of the following organelles, which ones are primarily found in animal cells?

The answer is D.