Hi, and welcome to this Mometrix video about lipids! Today, we’re going to define what lipids are, learn about their physical properties, and then take a look at the structure of two important types of lipids.

The International Union of Pure and Applied Chemistry—the scientists that decide on official names and definitions—loosely defines lipids as “substances of biological origin that are soluble in nonpolar solvents.” That’s a pretty vague definition. And it has to be, because lipids are a diverse bunch of molecules that include fats, phospholipids, steroids, and certain vitamins. But we can pull a couple of important things out of this definition.

Notably, this definition doesn’t include any specific structural characteristics for lipids. So, even though steroids, water-insoluble vitamins, fats, and phospholipids are all considered lipids, they look very different from each other. However, they are each primarily made up of carbon and hydrogen (hydrocarbons).

Let’s take a minute to understand why hydrocarbons (and thus lipids) are not water-soluble. Hydrocarbons are generally water-insoluble because they are nonpolar molecules. In other words, there aren’t areas of partial positive or negative charge because carbon and hydrogen share the electrons equally in their covalent bonds. This means hydrocarbons don’t form strong interactions with water and therefore, don’t dissolve in water. For this reason, you’ll often hear hydrocarbons called “hydrophobic,” which means “water-fearing.”

Now that we have the general definition of lipids, let’s focus on two specific types: fats and phospholipids.

Fat is probably the lipid you’re most familiar with. In fact, the words fat and lipid are often used interchangeably in everyday language. But as we just learned, in biochemistry, fat is actually a subgroup of lipids. Fats are also one of the three macronutrients, along with carbohydrates and proteins. They serve primarily as an energy source in the body, but also provide insulation and protection as well as transportation for water-insoluble vitamins.

Most fats are glycerides. Glycerides are a combination of glycerol and fatty acids.

Glycerol is a small organic molecule with three alcohols (OH), and fatty acids are a long hydrocarbon chain (the “fatty” part) attached to a carboxylic acid (the acid part). The carboxylic acid allows the fatty acid to easily link with alcohols to form esters. Because there are three alcohol groups on glycerol, up to three fatty acids can attach to one glycerol molecule, which are called triglycerides. Most dietary fats we encounter, like butter, olive oil, and animal fat, are triglycerides.

Let’s take a look at one other type of lipid: the phospholipid. It’s a diglyceride, meaning it’s a glycerol linked to two fatty acids. In the third alcohol position on glycerol, instead of an additional fatty acid, there is a phosphate derivative. This group is highly polarized and interacts very strongly with water. Thus, the phospholipid has a hydrophilic head and a hydrophobic tail (a property called amphiphilic). 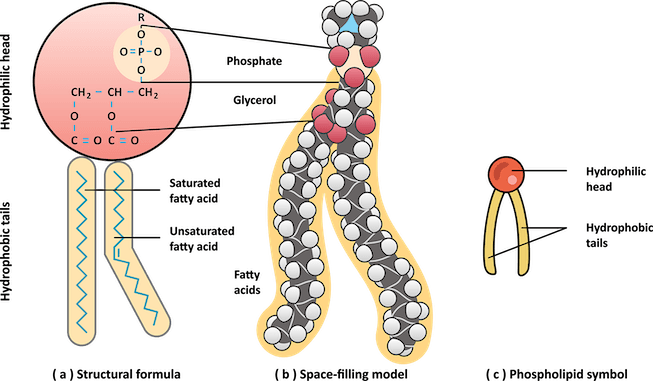 To maximize interactions between the phosphate group and water and minimize interactions between the fatty tails and water, phospholipids form bilayers- a double layer of phospholipids with the phosphate heads pointed outwards and the fatty tails pointed inwards. This structure makes up cell membranes, the wall between cells and the rest of the world, which is a pretty important job! The amphiphilic nature of phospholipids makes them perfectly suited for creating barriers—just another important reminder that function is always connected to the molecular structure.

Let’s quickly review what we’ve learned. Lipids are biological molecules that are water-insoluble and include fats, phospholipids, steroids, and some vitamins. While there is no specific structure that defines a lipid, they are all primarily hydrocarbon structures. Finally, we wrapped up by looking closely at the structures of fats and phospholipids.

Thanks for watching this review of lipids. We hope you feel prepped and empowered!

A lipid is a macromolecule that contains hydrocarbon chains.

What is the function of lipids?

Lipids have many functions such as storing energy, providing structural support for cell membranes, and act as signaling molecules.

What are lipids made of?

Lipids are made of carbon, hydrogen, and oxygen.

Lipids are hydrophobic and not water-soluble. However, there are some lipids that are amphipathic, such as phospholipids, which have a hydrophobic part and a hydrophililic part.

Fats are one type of lipid, and therefore fatty acids are lipids.

Although steroids structurally look different, they are another class of lipids.

Lipids are hydrophilic and therefore are considered nonpolar.