Hi, and welcome to this review of inequalities! Today, we’ll be looking at what inequalities are and how to solve inequality problems. Let’s get started!

Before we dive into inequalities, let’s remind ourselves what an equality is. We know that an “equality,” or an equation, presents values that are equal to each other. An equal sign is the notation that indicates an equation, and it symbolizes the “balancing” of the expressions on either side. In order to solve a linear equation, we use addition, subtraction, multiplication, and division in a specific order to “isolate” the variable on one side of the equation, and a constant on the other side. You have “solved” a linear equation when that variable value is known. It is the one value that, when substituted back into the original equation, will result in a “true” statement.

How to Solve Inequalities

For a quick review, let’s look at the following example:

First, we want to get our variables on one side and our constants on another. So I’m going to add 2 to both sides. That gives us:

Then, I’m going to subtract \(x\) from this side, and then this side as well (because we want to do the same thing on both sides). That gives us:

And then to get \(x\) by itself divide by 2 on both sides, which gives us:

Now let’s check it on the other side.

And these two values equal each other.

A review of these steps is meaningful, because they remain pretty much the same when solving inequalities. There is a case for some problems that require a small adjustment to the inequality, but we will focus on that later.

It is important to understand that while solving a linear equation results in one solution, solving an inequality results in a set of many solutions. The solving procedure determines the critical value or “boundary” that defines the solution set.

We can modify this notation slightly to include the critical value that results from the solving process. Note the line under the symbols: \(\leq\) and \(\geq\). Using the previous examples, \(x\leq 10\) is the set of all numbers less than or equal to 10, and \(x\geq 25\) are those numbers greater than or equal to 25.

When inequalities are graphed on a number line, an open circle is used at the critical value to indicate that is NOT included in the solution set, while a closed circle indicates that it is included, as shown here: 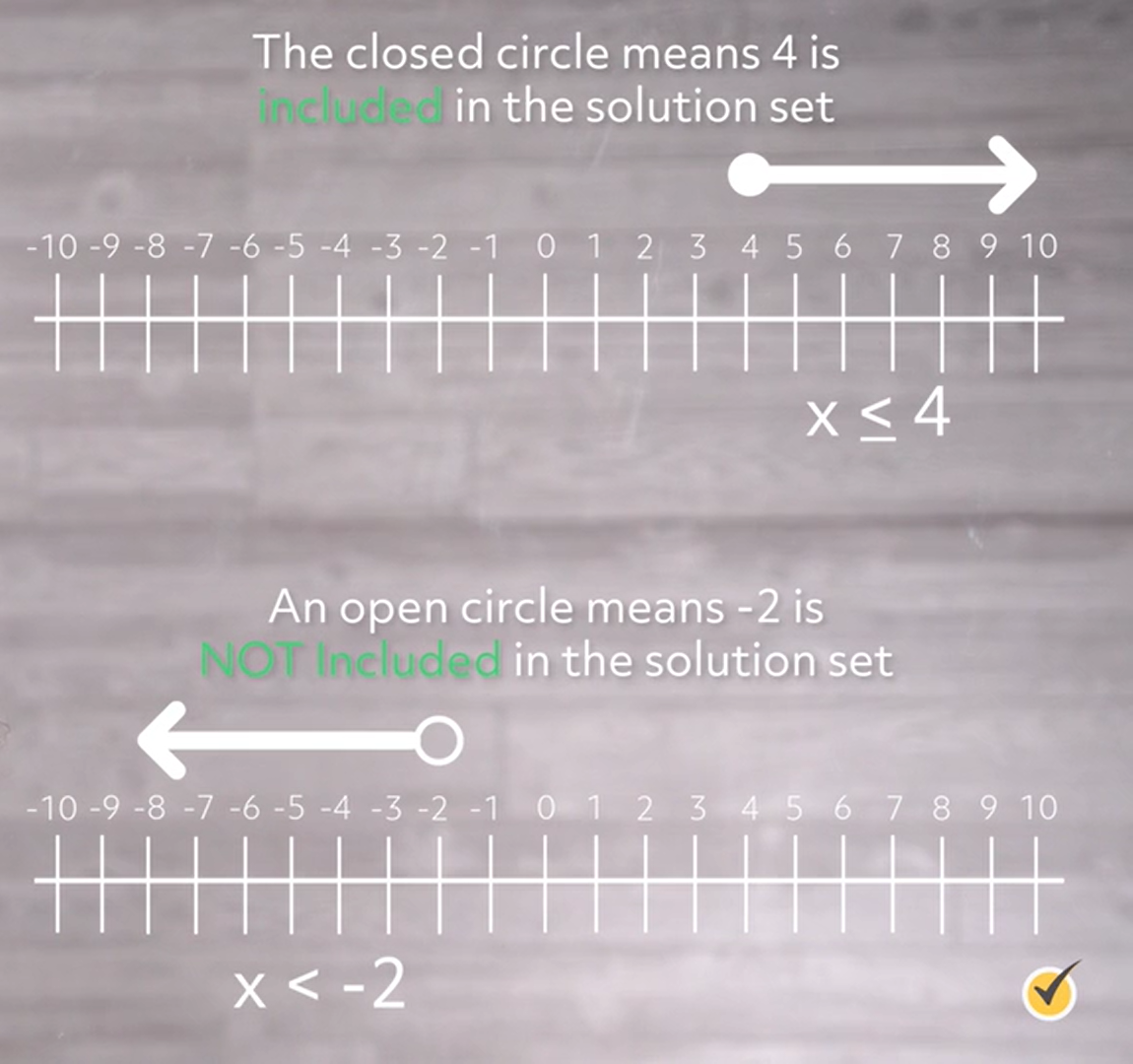 Let’s sort out this notation with a few examples of solving inequalities.

The approach here will be the same as solving an equation, but the inequality symbol will be interpreted differently.

The first step to isolate the variable term is to subtract 2 from both sides. This gives us:

The second step is to determine the critical value of \(x\) by dividing both sides by 3:

The result, \(x \leq 5\), states that all values of x that are less than or equal to 5 will satisfy the original inequality.

Let’s try another one:

Remember, the inequality symbol is different in this example, which means that the critical value you will find will not be included in the solution set.

This gives us our critical value of 4 because \(x> 4\). This final inequality, \(x> 4\), tells us that all values of x that are greater than but not equal to 4 are in this solution set.

As mentioned, there is a time when you must make an adjustment to the inequality before the solution set is determined. When dividing or multiplying by a negative value in the solving process, it is necessary to reverse the direction of the inequality symbol! This is necessary because sign changes occur with these operations.

The following example illustrates this concept:

There is only one step necessary in this inequality to determine the critical value. Specifically, we need to divide both sides by -5. Because dividing a signed integer results in a sign change, it is also necessary to reverse the direction of the inequality symbol from \(\geq\) to \(\leq \). So divided by -5 on both sides. Remember to flip your inequality sign and this results in:

The solution set is all values of x that are less than or equal to -4.

Let’s see if you can solve this last example on your own. Be sure to:

Pause the video and see what you can come up with.

Okay, let’s solve it together.

And then we’re going to divide by 2 on both sides, which gives us \(x\) < \(-5\). Since we divided by +2 and not -2, we didn’t have to flip our inequality sign. So our final solution set is the solution set of all values of \(x\) that are less than but NOT equal to -5. I hope this review of inequalities was helpful! Thanks for watching, and happy studying!

Which of the following inequalities matches the graph below?

The correct answer is B. Solving an inequality is very similar to solving an equation. The goal is to isolate the variable by using inverse operations. First, subtract 3 from both sides of the inequality, and then divide both sides by 2. This leaves us with x > 2. Note: Only reverse the inequality sign when multiplying or dividing by a negative.

The correct answer is B. Once again, the variable needs to be isolated by using inverse operations. First, subtract 5 from both sides. This gives us -3x ≤ -21. From here, divide both sides by -3. Remember, when multiplying or dividing by a negative, reverse the inequality sign. Dividing both sides by -3 leaves us with x ≥ 7.

Which statement about the graph of the inequality x <-2 is incorrect?

-2 is a solution to the inequality

The arrow of the graph will extend to the left

There will be an open circle on the value -2

-3 is a solution to the inequality

The correct answer is A. The inequality x < -2 is graphed below:

The arrow reaches to the left of -2 because all values that are less than -2 are solutions for this inequality. The circle is open because -2 itself is not a solution.