How to Graph Linear Equations

Hi, and welcome to this video on graphing linear equations! In this video, we’re going to quickly review the various ways that linear equations can be written, and discover the best methods of graphing equations by hand based on the form that you are given. Let’s get started!

When graphed, linear equations form a straight line on the xy-coordinate plane. The graph is a visual representation, and it is often useful to identify key features that are not immediately recognizable from the equation. For example, when we look at a graph, we can see exactly where a line crosses the x-axis. This is useful because that x-value is the solution to the equation. Similarly, if we are given a system of equations, meaning one or more equations, we can find the solution of the system by graphing each line and finding the point of intersection, if it exists.

Knowing how to graph a linear equation by hand is an important skill. The graphing method that you will use will depend on the structure that is provided. Let’s quickly review the three forms:

An equation in standard form is written as Ax plus By equals C, \(Ax + By = C\), where A, B and C are constants. A and B are known as coefficients of the variables x and y, respectively.

An equation in slope-intercept form is written as y equals mx plus b, \(y = mx + b\), where “m” represents the slope of the line, and “b” represents the y-intercept, which is the point on the y-axis where the line crosses.

While the equations may look different, they all represent a line. When you are asked to graph an equation, you will want to choose the method that is most suitable based on what is provided. Let’s now take a look at each form and determine the graphing method that is the best for each. Let’s start with an example that uses standard form:

A few algebraic steps are necessary in order to graph a line in this form. Keep in mind that you only need two points to graph a line, and using a straight edge to carefully draw the line through those points will provide more accurate results.

The two points that can be quickly calculated from this form are the x-intercept and the y-intercept. The graph here illustrates this process visually.

The y-intercept can be determined by substituting x equals 0 x=0 into the equation and solving for y.

Likewise, the x-intercept can be determined by substituting y equals 0 y=0 into the equation and solving for x, as follows:

Once the intercepts are plotted at the points (0, 4) and (6, 0), you are ready to graph the line. The line passes through these points, and arrows at the ends should be drawn to indicate that the line extends forever in both directions.

This equation is in Standard Form and the constant, 12, is a multiple of both 3 and 4. Therefore, using the intercept method to graph is a good method. As before, determine both the y and x-intercepts:

To find the y-intercept, let x equal 0 x=0 in the standard form equation and solve for y, as shown:

The x-intercept can be determined by substituting y equals 0 y=0 into the equation and solving for x:

Graph this line by plotting the intercepts and drawing a straight line extending through the points, like so: (see image at 6:00)

If you are given a standard form equation but the constant, C, is not a multiple of the coefficients A and B, then converting the equation into Slope-Intercept Form will provide the information needed for a more accurate graph.

To convert to Slope-Intercept Form, simply solve the standard form equation for y.

Consider the standard form equation, 3x plus 2y equals 4. 3x + 2y = 4. You notice immediately that while 4 is a multiple of 2, it is not a multiple of 3. A better way to graph this line is to first convert it to Slope-Intercept Form by solving for the variable y.

To do this, we take our equation, 3x plus 2y

And subtract 3x from both sides.

This gives us 2y

Now we wanna divide by 2

When we divide the whole equation by 2, it’s also the same as dividing each part by 2.

Now, this equation looks similar to what we want but it’s not quite right

We want our x to be in front

Since we’re adding, we can flip this without worrying about changing anything

Because the numerator of the slope is negative 3, move 3 units down from the y-intercept. From there, move 2 units to the right, as indicated by the denominator of the slope, 2.

This movement from the y-intercept brings you to another point that is on the line, (2, -1). With two points plotted, you can graph the straight line that extends through them.

Now let’s try this out with another example problem:

This equation is already in Slope-Intercept Form.

The slope is identified as m equals two-thirds m=23 and the y-intercept is at the ordered pair, (0, negative 1). (0,-1). That is where the graphing begins. Plot the first point at the y-intercept, then move from that point according to the slope. Both numerator and denominator are positive, so the “rise” is up 2 and the “run” is right 3.

This brings you to the second point that is needed to graph the line, (3, 1). Carefully draw a line that extends through these two points.

Okay, now to our third and final form, Point-Slope Form.

As noted, the Point-Slope Form of an equation names a point, \((x_{1} , y_{1})\), that the line travels through. It also provides the slope. So, graphing a line in this form is similar to the process we detailed before. The exception is that rather than starting at the y-intercept, the first point of the graph is at the point \((x_{1} , y_{1})\). Identifying that point sometimes causes some confusion.

Remember, when you subtract a negative value, it has the same effect as addition. As a result, rewriting the equation to reflect subtraction is allowable.

Here is another example of a point-slope equation that deserves some attention:

This equation is unique because there is no y-coordinate being subtracted from the y-variable. To identify the point, rewrite the equation as: [latex]y-0=12(x-4)\). Now the point can be seen as the x-intercept, (4, 0).

Now that the first point can be identified from point-slope form, use the slope to move from that point to another point on the line using slope.

This brings you to another point on the graph, (3, 7). The line can then be graphed extending through these two points.

Identify and plot the first point, (1, 2). Slope in this equation is a negative. At this stage, you can decide to move the rise or the run in the negative direction. For this example, let’s consider the rise, or the numerator, to be the negative value:
m equals rise over run, which equals negative 1 over 3
\(m=\frac{rise}{run}=\frac{-1}{3}\)

The line is graphed by drawing a line extending through these two points.

Now that you have had some practice identifying the features of linear equations in various forms, you can recognize why there are different graphing methods. A quick analysis of the equation should give you direction on how to proceed with the graphing process.

To convert to slope-intercept form, solve the standard form equation for y.
\(5x+4y=8\)

First, move 5x to the right side of the equation by using inverse operations. Since the opposite of addition is subtraction, subtract 5x from both sides of the equation.
\(5x+4y-5x=8-5x\)

What are the coordinates for the x-intercept and the y-intercept?

Next, isolate the variable x by using its inverse operation. Since the opposite of multiplication is division, divide both sides of the equation by 6.
\(6x\div6=24\div6\)

Next, isolate the variable y by using its inverse operation. Since the opposite of multiplication is division, divide both sides of the equation by -4.
\(-4y\div-4=24\div-4\)

Carly pays 5 dollars to rent a bicycle to go for a ride along the river trail. For each hour she rents the bike, Carly pays an extra 2 dollars. This scenario is illustrated in the graph below. Which equation represents the scenario and corresponding graph? 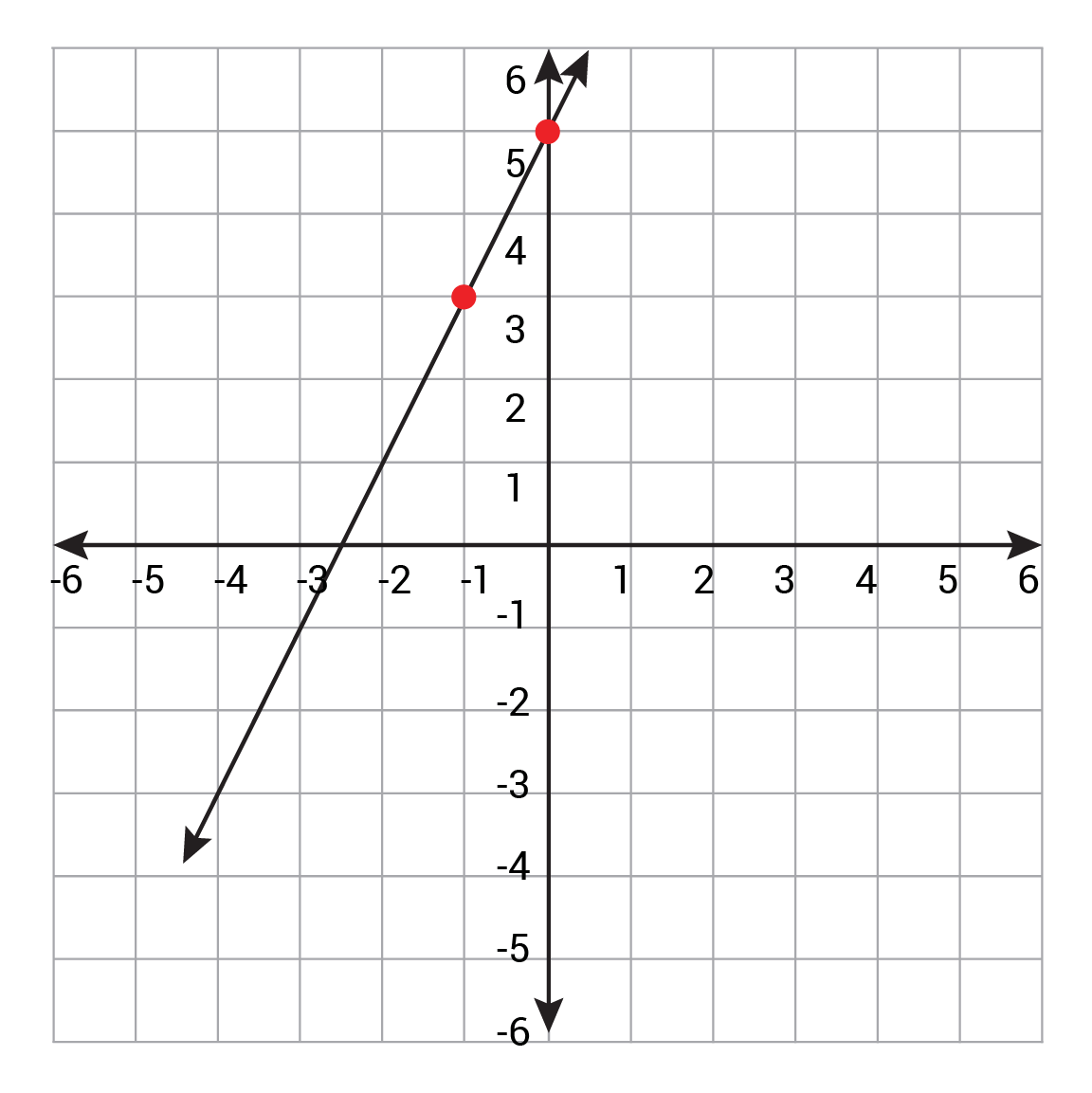 Given the following linear equation in point-slope form, what point does it pass through when graphed?
\(y-8=\frac{1}{4}(x+3)\)

Notice that in this equation, the x-coordinate is added to x instead of subtracted. Remember that subtracting a negative number has the same result as adding. We can rewrite the formula as follows:
\(y-8=14(x-(-3))\)

Karen pays 224 dollars in advance for her gym membership, which is kept in an account. Each time she visits the gym, 7 dollars is deducted from her account. Which equation represents the value of Karen’s account after x visits to the gym?