How to Solve Systems of Equations

Hey guys! Welcome to this video over systems of equations.

A system of equations is a group of two or more equations, and each of the equations within the group have at least one unknown variable.

When given a system of equations, the goal is to find the value for each of the unknown variables.

In this video, we will discuss two tools to help you solve for the unknown variables: substitution, and elimination.

Substitution is a way of solving the system by getting rid of all of the variables, except for one, then solving for that equation.

There are three steps that you need to follow in order to be able to solve the system using substitution.

So let’s get started!

In this example, we can see that our second equation has a variable with 1 as the coefficient. So, that lets us know to solve for \(x\). Now, you can actually solve for any of the variables. It will just always be easier to solve for one that has a coefficient of 1 or -1.

Now that we have it down to one variable, we are able to solve for the value of that variable, so in this case, \(y\).

Let’s rewrite this by multiply our 4 by everything inside our parentheses.

Now we can add our 76 to both sides. You can do this multiple ways. If you wanted to add your \(y\)s together first, then do that. I’m just doing what is easier in my mind.

Use the number that you get when you solve to solve for the other variable, or variables.

So that gives you:

And we’re done! We have found the value of both of our variables using substitution.

Now, let’s take a look at how to solve for a system using elimination.

The reason this tool is called elimination is because you add together the two equations in order to eliminate one of your variables.

We can take our \(x\)-value and plug it into either of our original equations. I’ll plug it into our first one here. So, we have:

So, and then I’ll rewrite this:

Now, we need to move our 9 to the other side by subtracting 9.

Then we divide both sides by our -4 here.

So now we’ve solved and found both of our variables. That was a good example to learn how elimination works, but it may not always be that our terms cancel so easily.

None of our terms cancel right off the bat, so we’ll need to do a little manipulation in order to get them to do what we want them to do.

I’ll plug it into the second one. So we have:

And I’ll simplify this and rewrite it.

So our final answer to this problem is this:

I hope that this video on how to solve a system of equations using substitution and elimination has been helpful.

How do you solve systems of equations?

What are the four methods for solving systems of equations?

When solving systems of equations, you have a few options as far as which method you choose. The method that you select will depend on the structure of the equations. Selecting the strategy that is most convenient and efficient is of course the goal. The more you work with systems, the more trained your eye will become in selecting the best method. The four methods to choose from include substitution, elimination, graphing, and matrices. Each approach is quite different, but every strategy will ultimately arrive at the same goal, which is to locate the \((x, y)\) ordered pair where the lines intersect.

Why do we use systems of equations?

Systems of equations have many useful real-world applications. For example, whenever you are given two unknown values, as well as information that connects the two unknown values, a system of equations can be set up in order to solve for the two unknowns. For example, let’s say the admission fee to an amusement park is \($20\) for children and \($30\) for adults. Let’s also say that \(215\) people entered the park today, and that the total admission fees collected today was \($3{,}500\). We can solve for the number of children and adult tickets sold by setting up a system of equations. We have two unknown values, and we have enough information connecting the two values to set up our equations. To solve this problem, we first need to select a strategy (substitution, elimination, graphing, or matrices). Solving systems of equations is a skill that has many valuable applications. This is why the process of solving systems is considered a major branch of algebra.

What is the difference between an equation and a system of equations?

A linear equation can be graphed by plugging in values for \(x\), and then calculating the corresponding \(y\)-values. These \(x\)– and \(y\)-coordinates can be graphed and will eventually form a line. When there is more than one equation, and they share the same variables, the equations are called a “system”.

What careers use systems of equations?

The exciting thing about learning how to solve systems of equations is that the skill can be applied to almost any career! Anytime you are faced with a scenario where you have two unknown values, and enough information to compare the two values, setting up and solving a system of equations will allow you to identify the amount of each value. This is often useful in the field of finance, business, and sales. Specifically careers that involve calculations with costs, revenue, and profit.

How are systems of equations used in real life?

How do you solve systems of equations by substitution?

What is the substitution method with an example?

The following system of equations can be solved in three steps.

Step 1: Solve one equation for one of the variables.

Step 2: Substitute this expression into the other equation, and solve for the missing variable.

Step 3: Substitute this answer into one of the original equations in order to solve for the other variable.

How do you do elimination in algebra?

The variable \(z\) has dropped out, and now we only have two equations which means we are on the right track. However, we need to incorporate the third equation into the mix. Let’s do this by multiplying the second equation by \(2\), and then adding this to the third equation.

At this point, we are simply solving a two equation system with two variables.

Remember, when you have a system with three equations and three variables, the big idea is to work your way down to two equations with two variables, and eventually one equation with one variable. The more you practice these elimination problems the easier they will become!

Can you subtract systems of equations?

When solving a system of equations using the elimination method, the equations can be added or subtracted in order to eliminate a variable. For example, if you notice that both equations have the same variable with the same sign, then elimination using subtraction is likely the most efficient method.

For example, see if you can identify why subtraction with elimination is the best option for solving the following system.

You’re correct if you noticed that both equations have the same variable with the same sign: \(-3y\) and \(-3y\). This means that if one of the equations is subtracted from the other, the term will drop out, leaving only one variable (that’s the goal).

Step 1. To use the substitution method, solve one equation for one of the variables and substitute it into the other equation to find the value of the other variable. Both equations are already solved for \(y\), so we will substitute \(y=3x+2\) into the second equation to get:

Step 3. Next, substitute the value for \(x\) into either of the two original equations to find the \(y\)-value. Substituting into the first equation results in:

Step 2. Combine the two equations to eliminate \(x\). Then solve the resulting equation for \(y\).

Step 3. Now we can substitute the \(y\)-value into either of the original equations to find the \(x\)-value. Substituting \(y=5\) into the second equation, we get:

Step 2. Combine the two equations to eliminate \(y\). Then solve the resulting equation for \(x\).

Step 3. Now we can substitute the \(x\)-value into either of the original equations to find the \(y\)-value. Substituting \(x=5\) into the first equation, we get:

The sum of two numbers is 75. Four times the smaller number equals the larger number. What are the two numbers?

Since the larger number is four times the smaller number, we also have:

We can solve the following system of linear equations to find each number:

Step 2. Since the second equation is solved for \(y\), we will use the substitution method by substituting its value into the first equation.

So, we have the following system of equations:

We will use the elimination method by manipulating the equations so that one variable will cancel out when the equations are added or subtracted. We can multiply the first equation by –2.75 so that the \(x\)-variables are eliminated when the two equations are combined.

Step 2. Now combine the two equations to eliminate \(x\). Then solve the resulting equation for \(y\).

Step 3. Now we can substitute the \(y\)-value into either of the original equations to find the \(x\)-value. Substituting \(y=150\) into the first equation, we get:

So, the restaurant sold 75 hot dogs and 150 hamburgers.

An equation is a statement that two mathematical expressions are equal. Expressions represent quantities and can be strictly numerical or contain some combination of numerical terms and terms containing variables. For instance, \(6 + 3\) is a numerical expression and \(2x – 7\) is an expression that contains a variable.

Typically, equations are approached from the standpoint of “balancing,” “performing inverse operations,” and “isolating the variable.”

Here’s an example of how the process of solving equations might be approached. 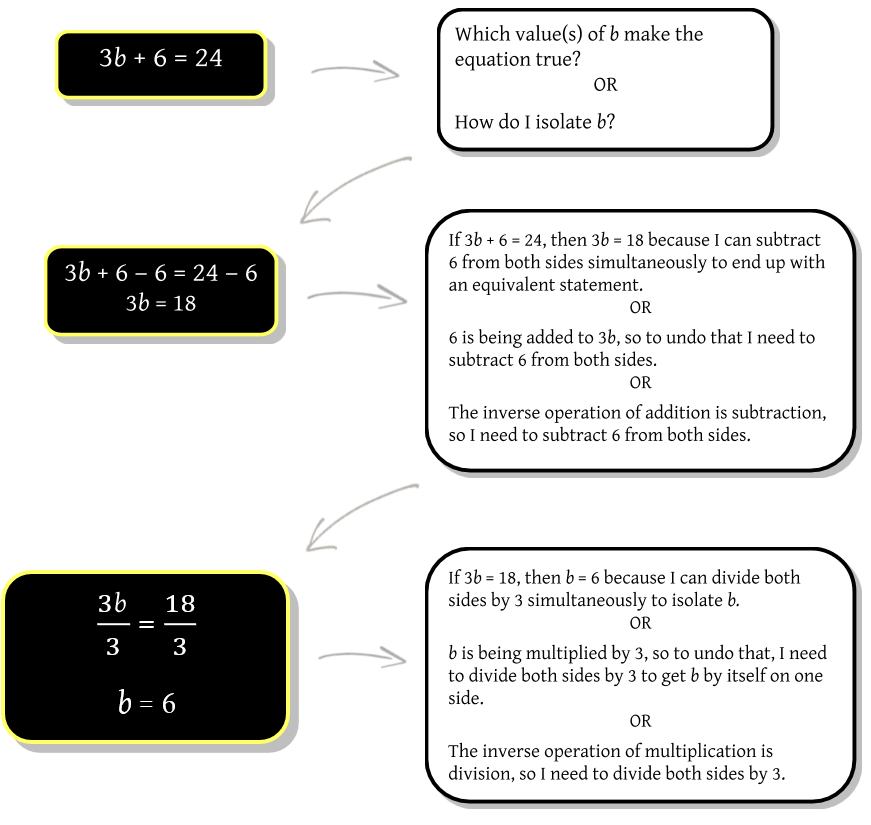 Example: Max is Ruby’s little brother. Ruby is half of three times Max’s age, and the sum of their ages is 25 years.  How old is each sibling? 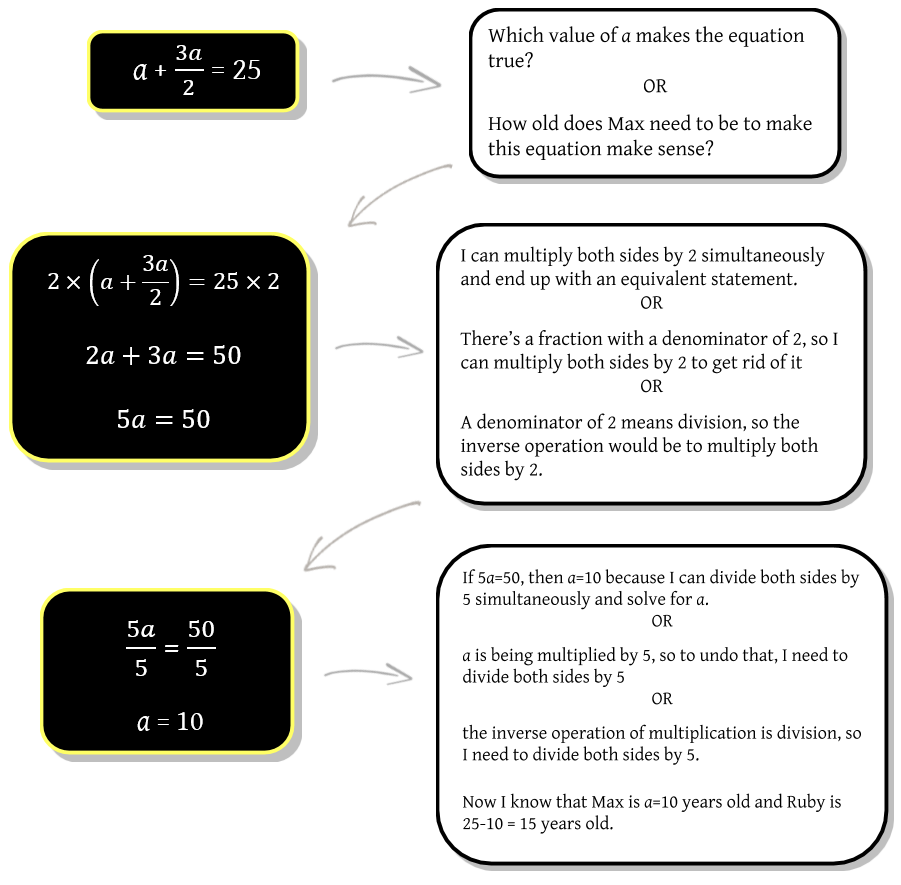 Sometimes, there are multiple ways to visualize an equation. Sometimes, the order we use depends on how we see the terms. For example, let’s look at a couple of different ways we can visualize and solve \(\frac{3x}{4} = 30 \):

Visualizing the problem this way will lead you down two different paths of solving it: 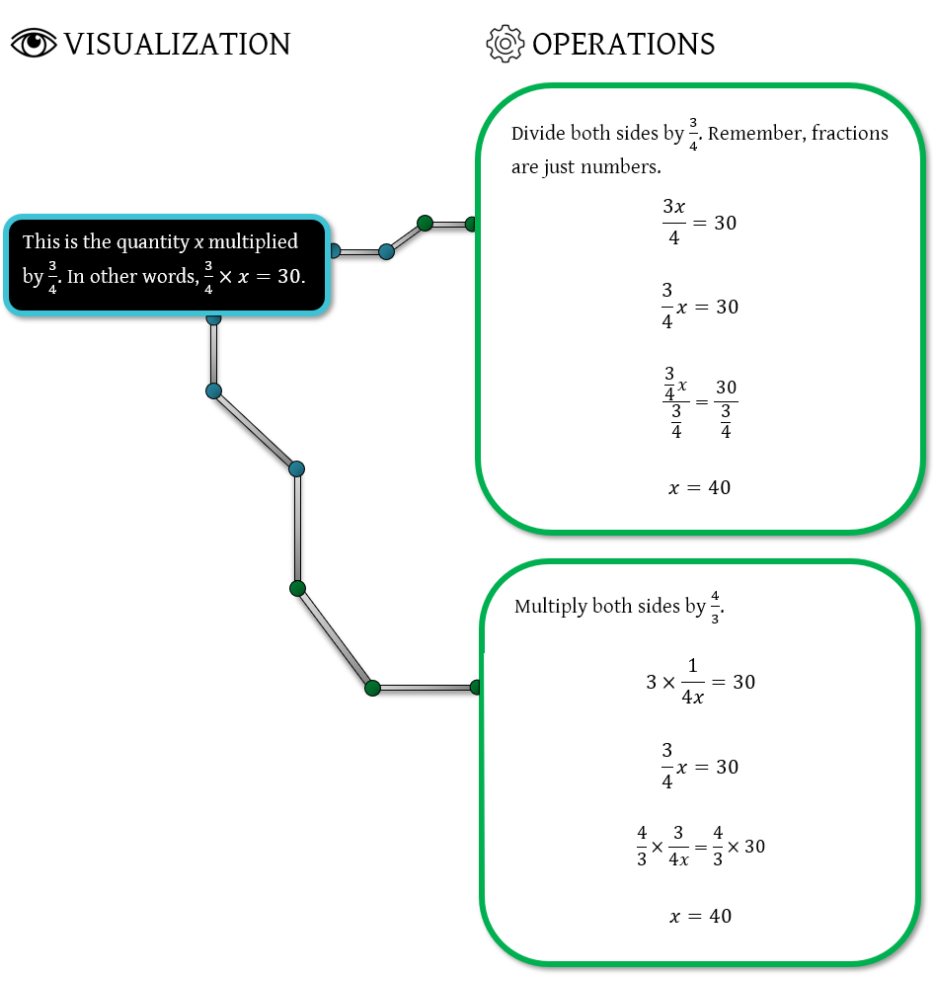 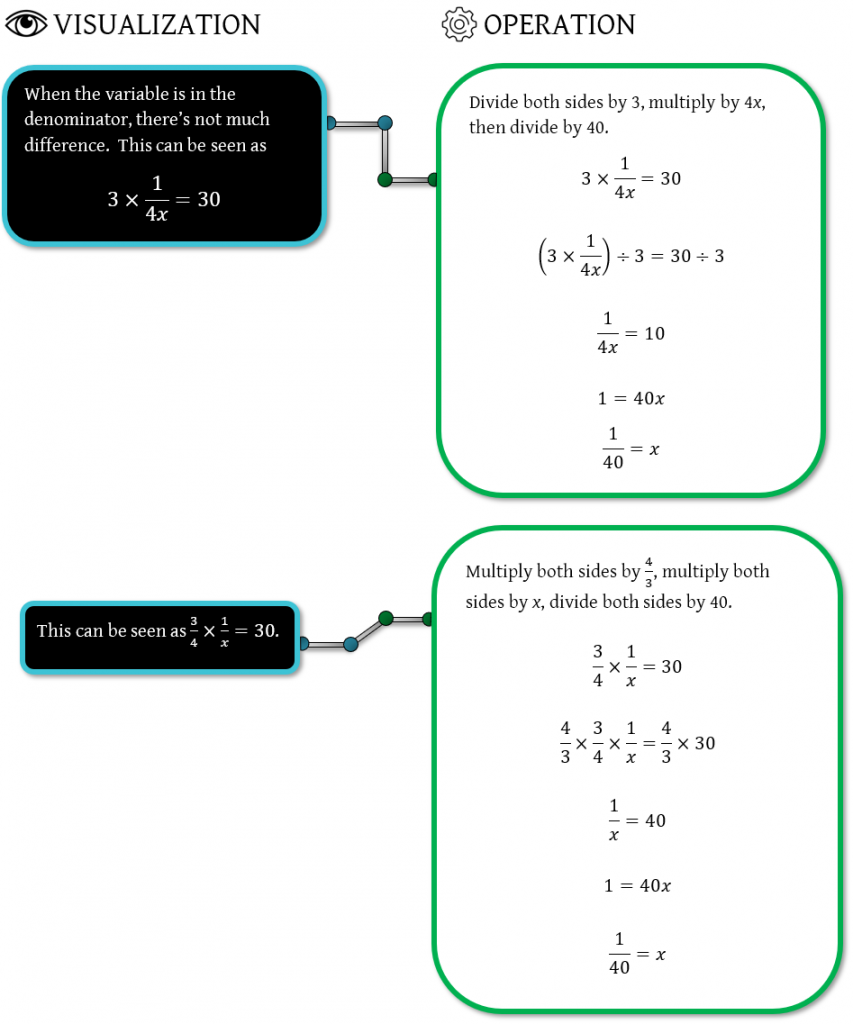