Hi, and welcome to this video about angles

Let’s start by defining a ray. A ray is a line with a single endpoint that extends infinitely in one direction.

If we take this ray and add another ray to it that has the same endpoint, we’ve created an angle. 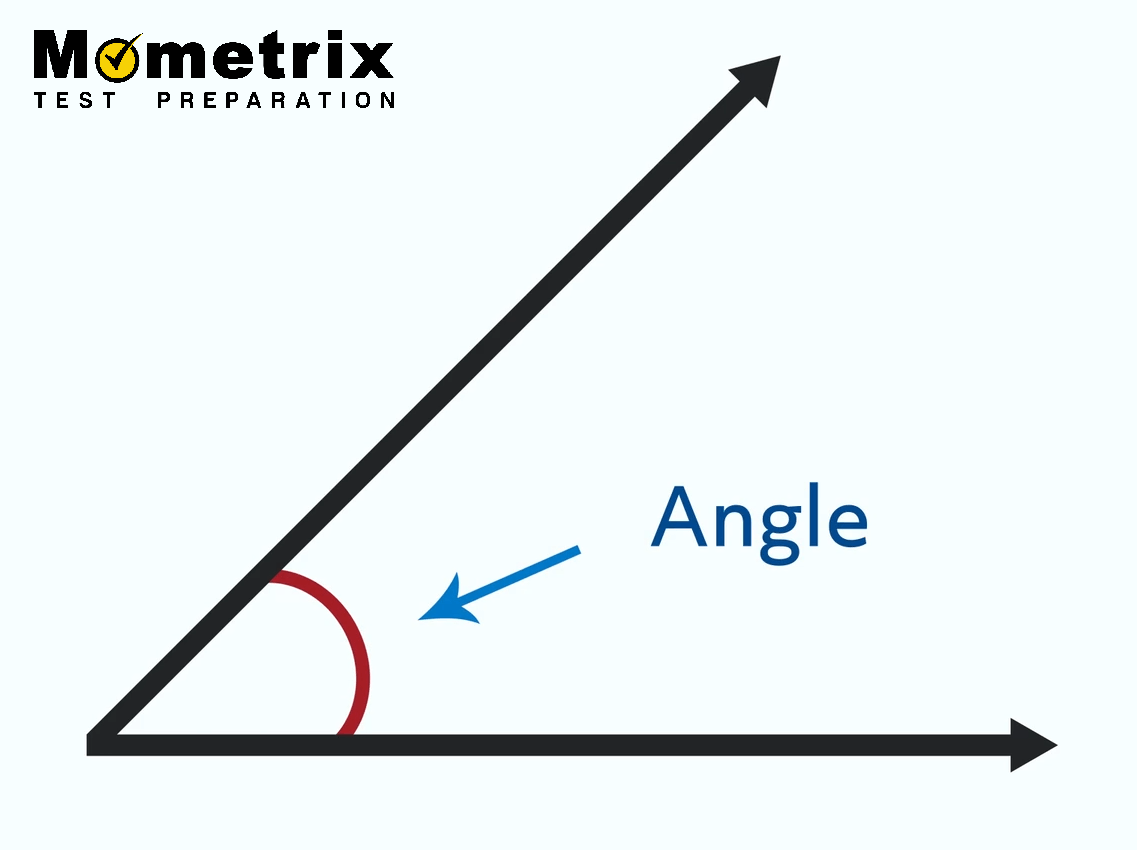 We’ve also created a vertex, which is the point where the two rays meet. 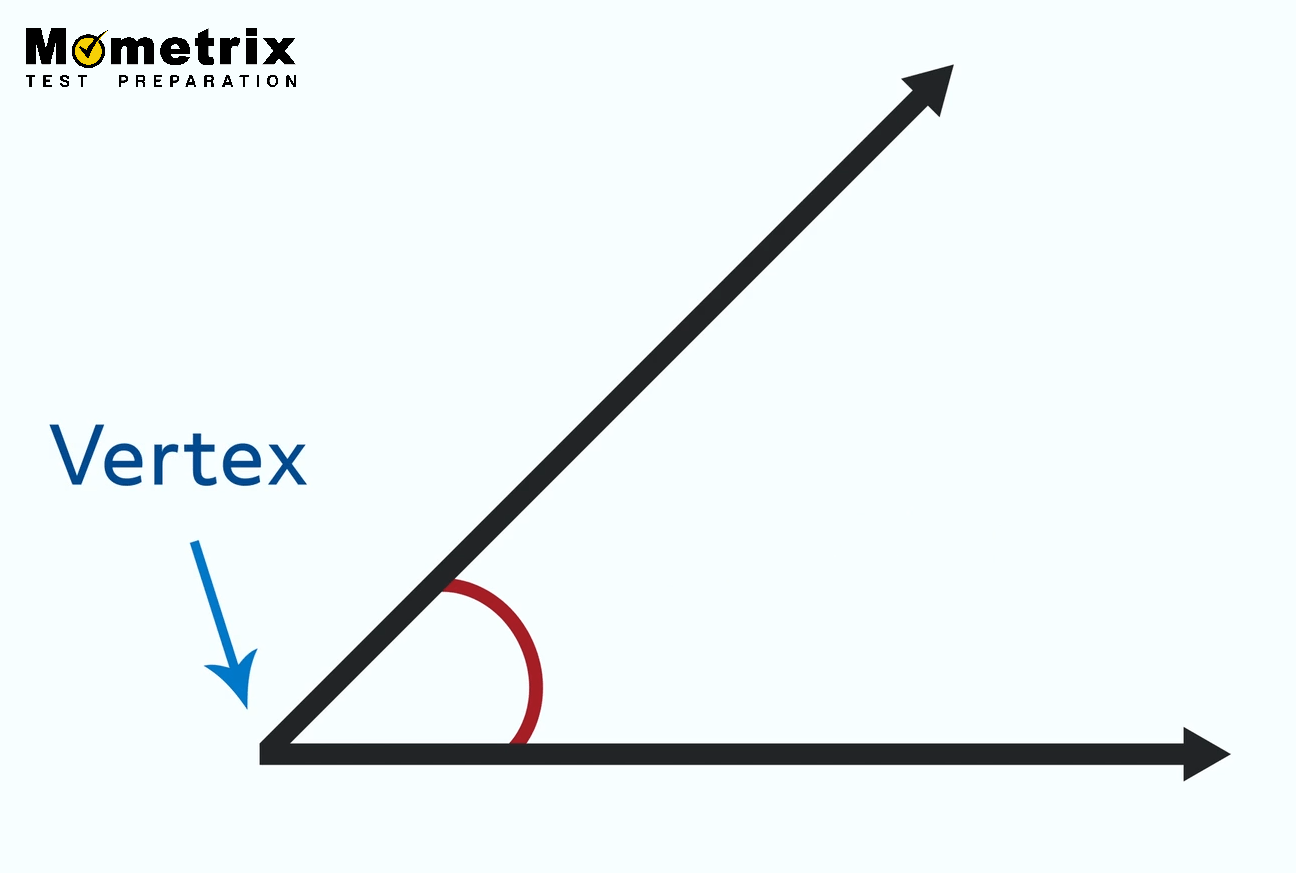 You can think of it as a corner. We usually see vertices whenever lines meet or in polygons like triangles and quadrilaterals.

Sometimes we have many angles, so in order to tell them apart, we have a system for naming them. Here’s our simple angle again but with a few points added on the rays: 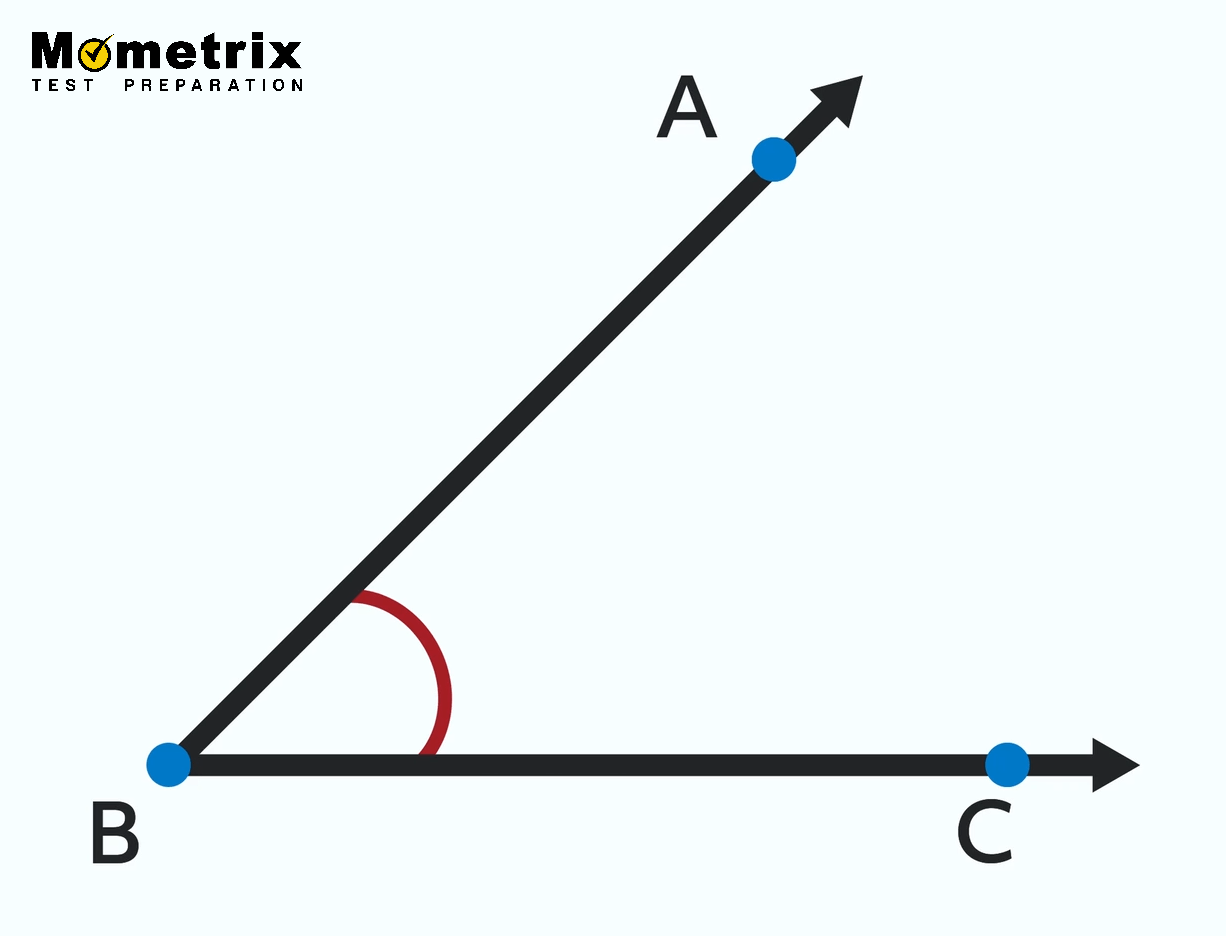 Now we can refer to our angle as angle ABC (∠ABC). When naming angles with three letters, the vertex point must be in the middle. Here, B is the vertex so the B goes between the A and the C. We can actually call this ∠CBA and it is just as correct.

If the point that is the vertex is only a part of one angle then we can use a shorter name. In this case, we could also call this angle B. Be careful though, because sometimes a single point can be the vertex of multiple angles, like this: 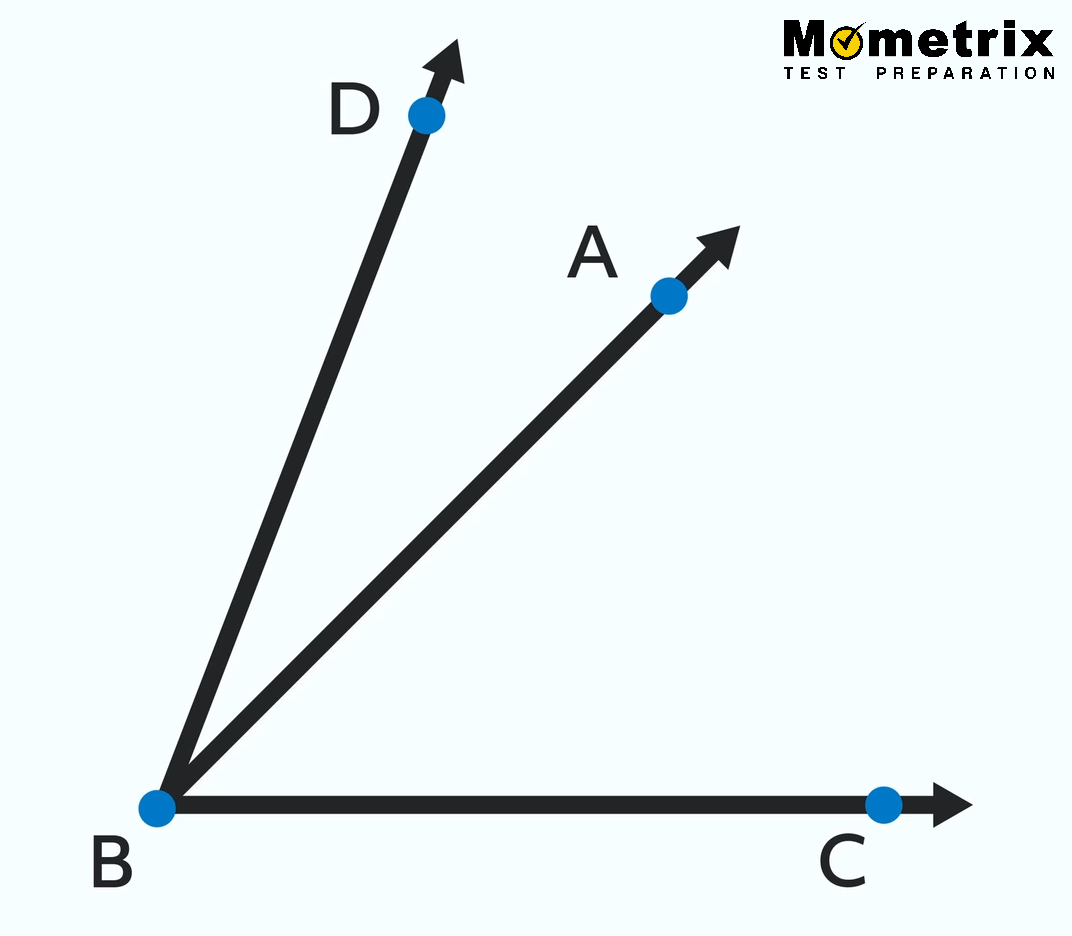 In this case, we’d have to call the angles by their long names, because point B is the vertex of ∠ABC, ∠DBC, and ∠DBA! If we asked someone to just look at ∠B they wouldn’t know which of these we meant. So it’s important to be precise when dealing with more than one angle.

Sometimes angles will be labeled with numbers inside the arc, like this: 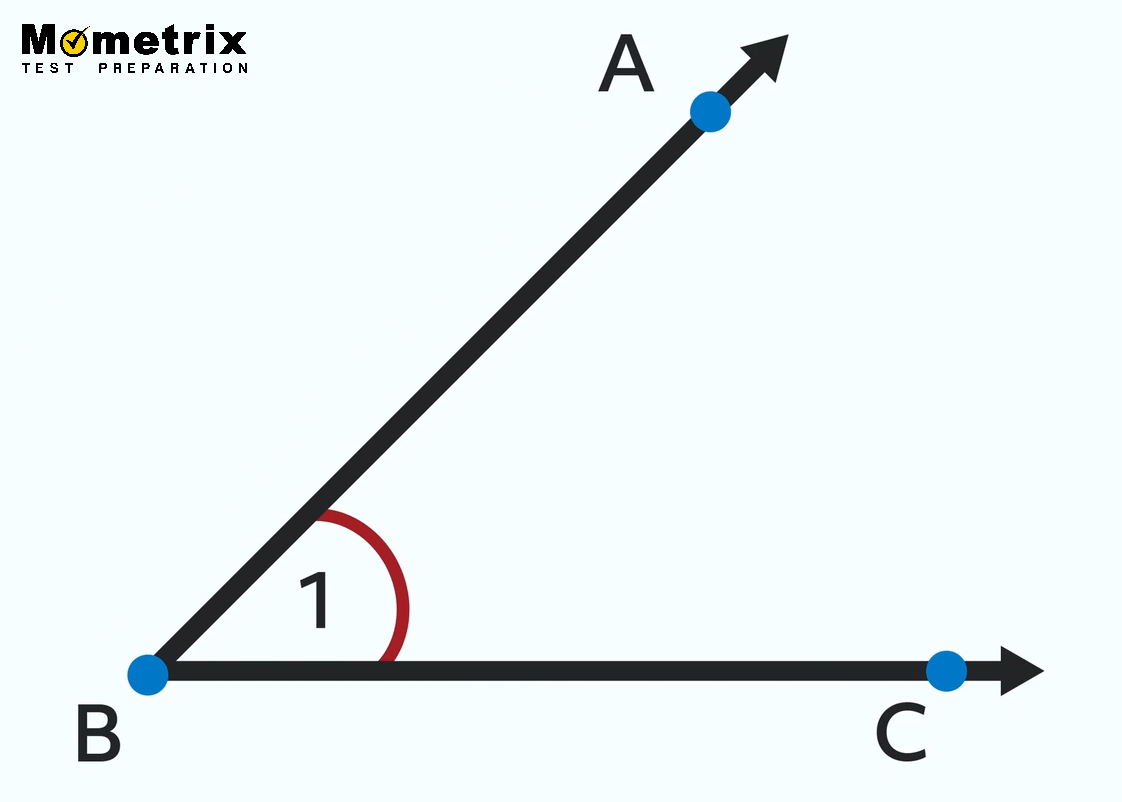 Now we have an additional name for this angle. We can now call it ∠1 or we can call it ∠ABC or we can call it ∠B. Since most of us have three names, it’s only fair that angles have a bunch too. But most of the time we like to use letters to name our angles, since the numbers could be confused with the measure of an angle. Sometimes you’ll see lowercase letters instead of numbers or Greek symbols like \(\theta\) or \(\alpha\).

Speaking of measuring, remember the protractor? We use it to measure angles. If we were to place one on our trusty angle we would find that it measures 45 degrees:

If we wrote this out, we would write it like this:

The measure of an angle is important in classifying angles, as we’re about to see.

Let’s look at a variation of our two-ray angle, but this time let’s make it so that they are perpendicular to each other, which means the angle between them is 90 degrees: 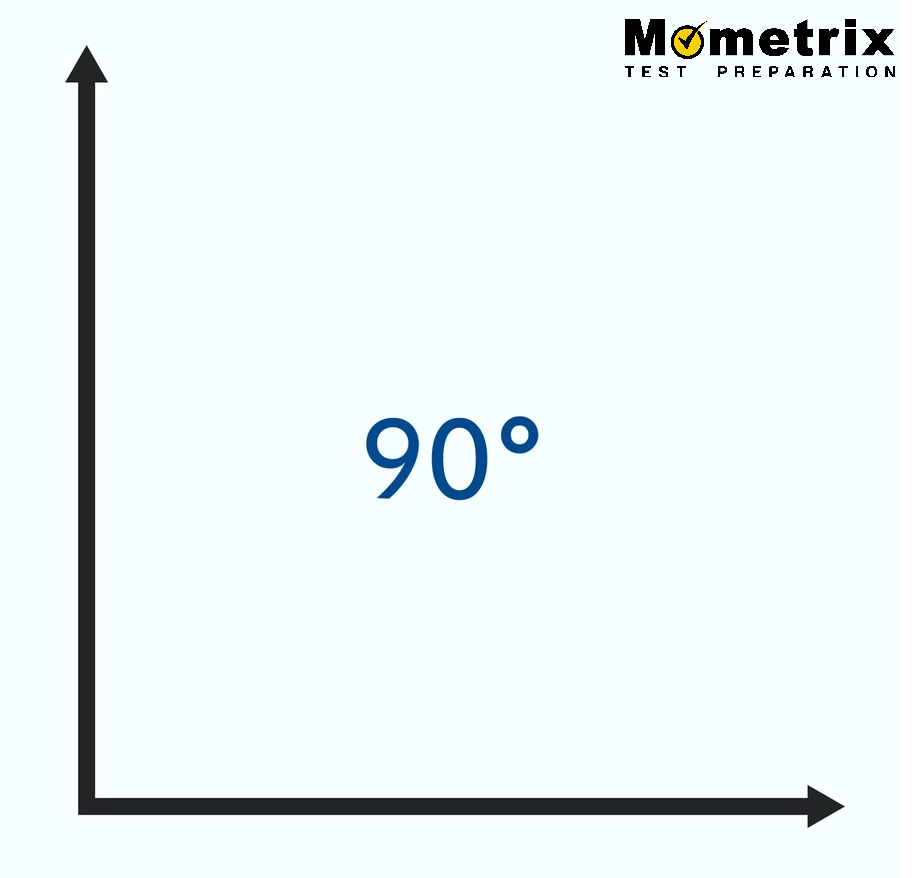 Here, we’ve created a right angle. Notice that it has a different angle symbol than our first angle. Instead of an arc, it has a square. Whenever we see an angle with that square we know it is exactly 90 degrees. We most often see right angles in squares, rectangles, and right triangles, but they can appear in other places too. 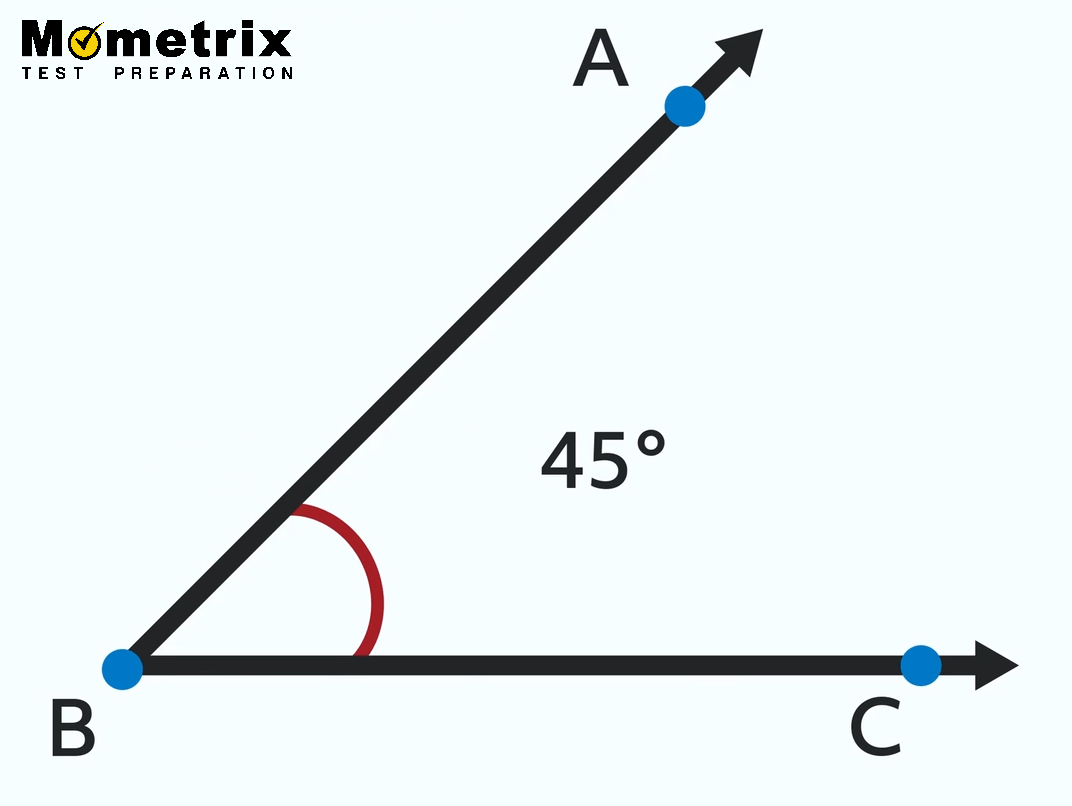 If we make an angle so that it has a measure that is greater than 90 degrees, we create an obtuse angle, which looks like this:

In this case, angle ABC has a measure of 140 degrees, which is greater than 90. Obtuse angles also have to be less than 180 degrees.

Those are the three main types of angles as determined by measure, but there are two more oddballs we need to know about.

The first is a straight angle. It looks like a straight line, and it has a measure of 180 degrees.

When it’s drawn like this, we can see that ∠ABC does exist and has a measure of 180 degrees. This is a useful thing to know because we’ll need it to understand linear pairs later on.

But before we get to that, let’s look at the other oddball. This one doesn’t look like an angle at all:

But in fact, it’s called a full angle. Imagine we rotated point A counterclockwise, with point B staying where it is, until it lined up with point C again. How many degrees is that? It’s all the way around the circle, which we know is 360°.

Remember our straight angle? What if we drew that but added another ray sticking out of it, like this:

If we know that angle DBC is 55 degrees, and we know that angle ABC is a straight angle and therefore 180 degrees, we can actually find angle ABD! How? By taking the whole straight angle (∠ABC) that measures 180 degrees and subtracting the smaller angle (∠DBC) that measures 55 degrees. \(180° – 55° = 125°\). This is called a linear pair. Two angles (∠ABD & ∠DBC) combine to form ∠ABC, which is a line. And because the two smaller angles add up to 180 degrees, we can also say that they are supplementary angles.

Something very similar happens with right angles. Here’s our right angle from before, but with another ray in the middle: 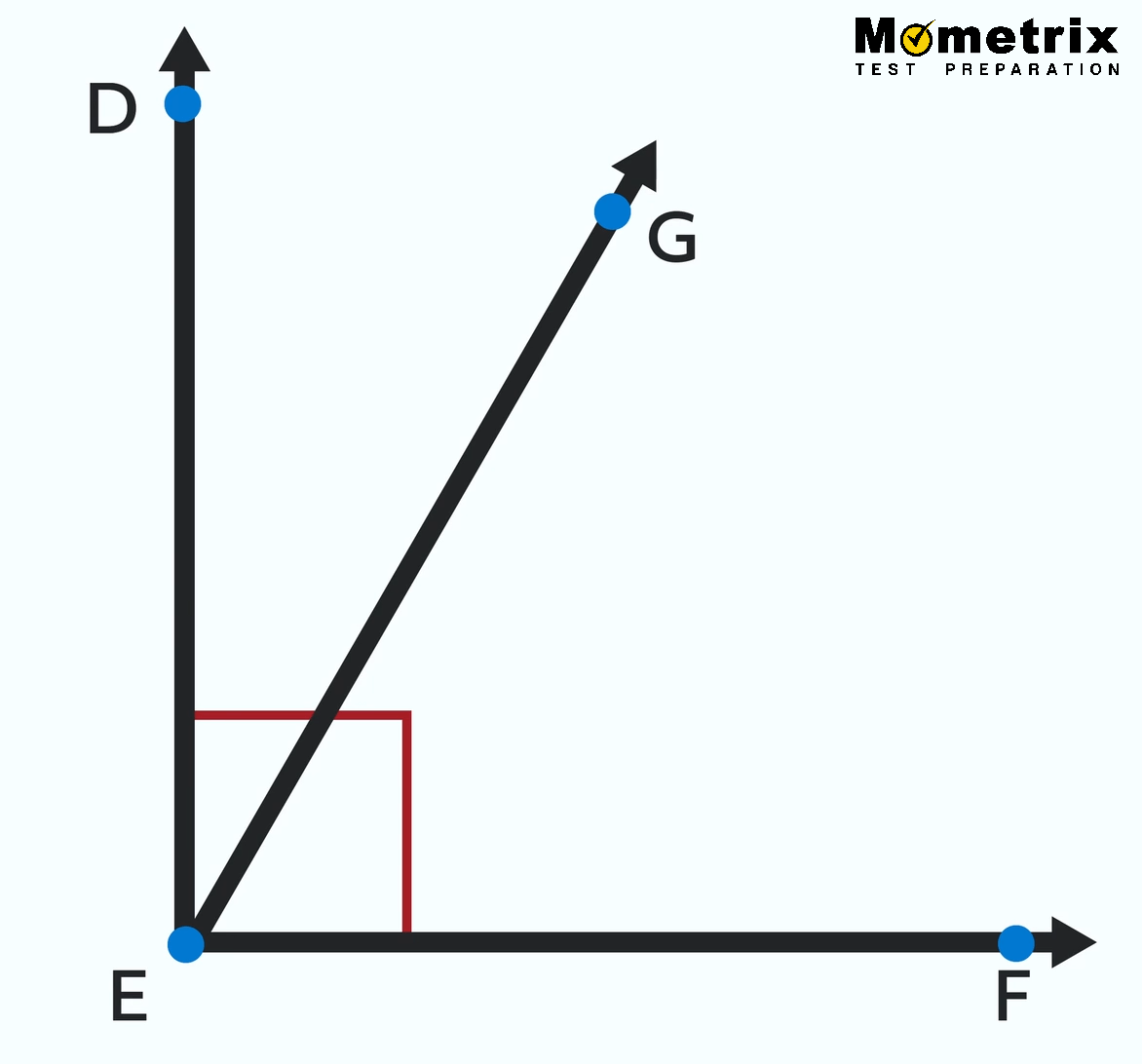 Angle DEF is a right angle. We can see that ∠DEG and ∠GEF together completely fill ∠DEF, which means they add up to 90 degrees. So if we know one of the two angles we can find the other one by subtracting its measure from 90 degrees. For instance, if ∠DEG is 30° then we know that ∠GEF is 60° because 90° – 30° = 60°. Angles that add up to 90° are called complementary angles.

Let’s go back to our obtuse angle one more time. There’s one more type of angle that’s been hiding in plain sight that we need to be aware of.

We can see that ∠ABC is an obtuse angle, which means it’s more than 90° and less than 180°. But what about the other side?

This is called a reflex angle. 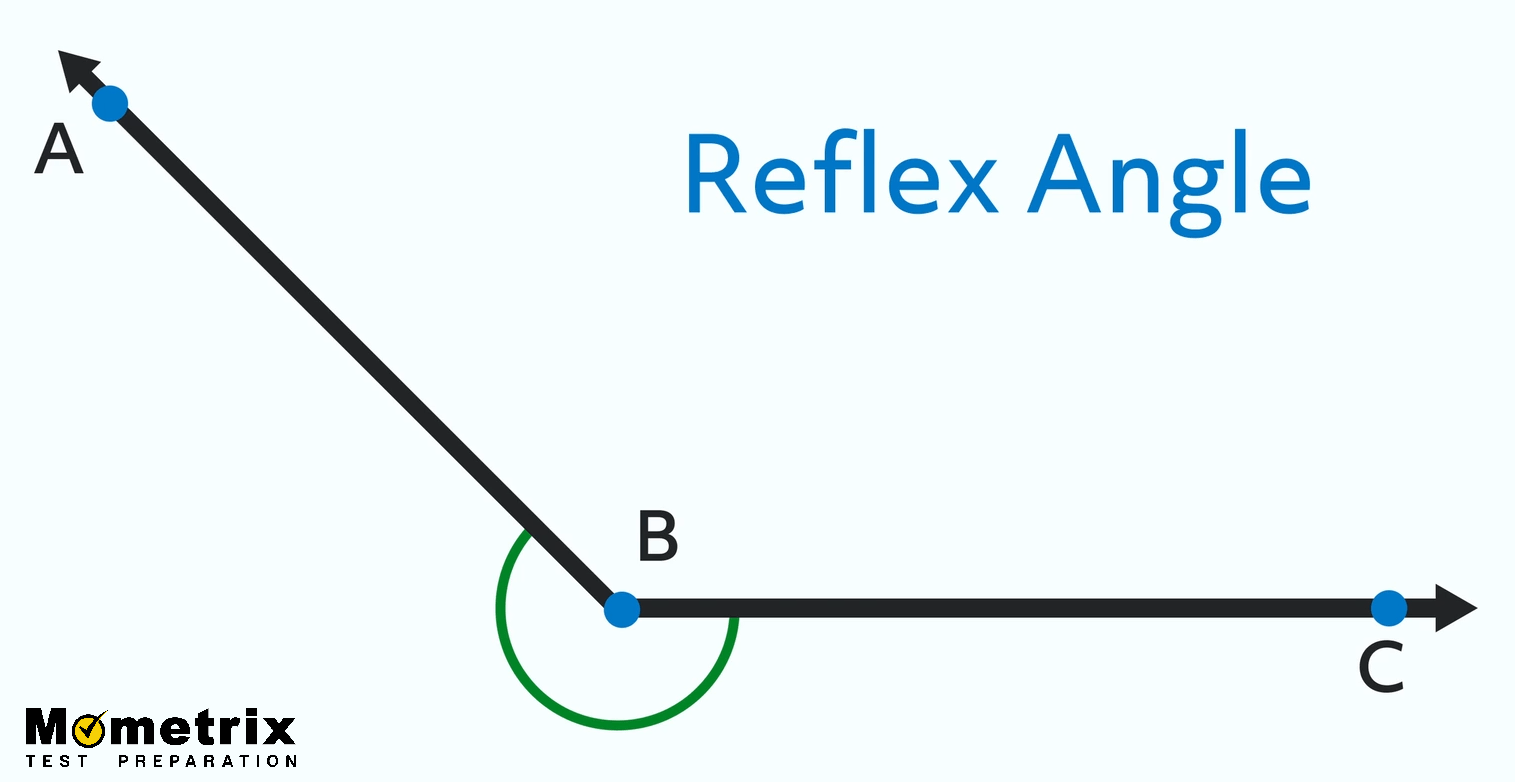 Next, let’s take a look at where we’ll see some of these angles in the wild, or at least in geometry problems.

Let’s start by looking at two lines that intersect. In this case, we’ve numbered the angles. 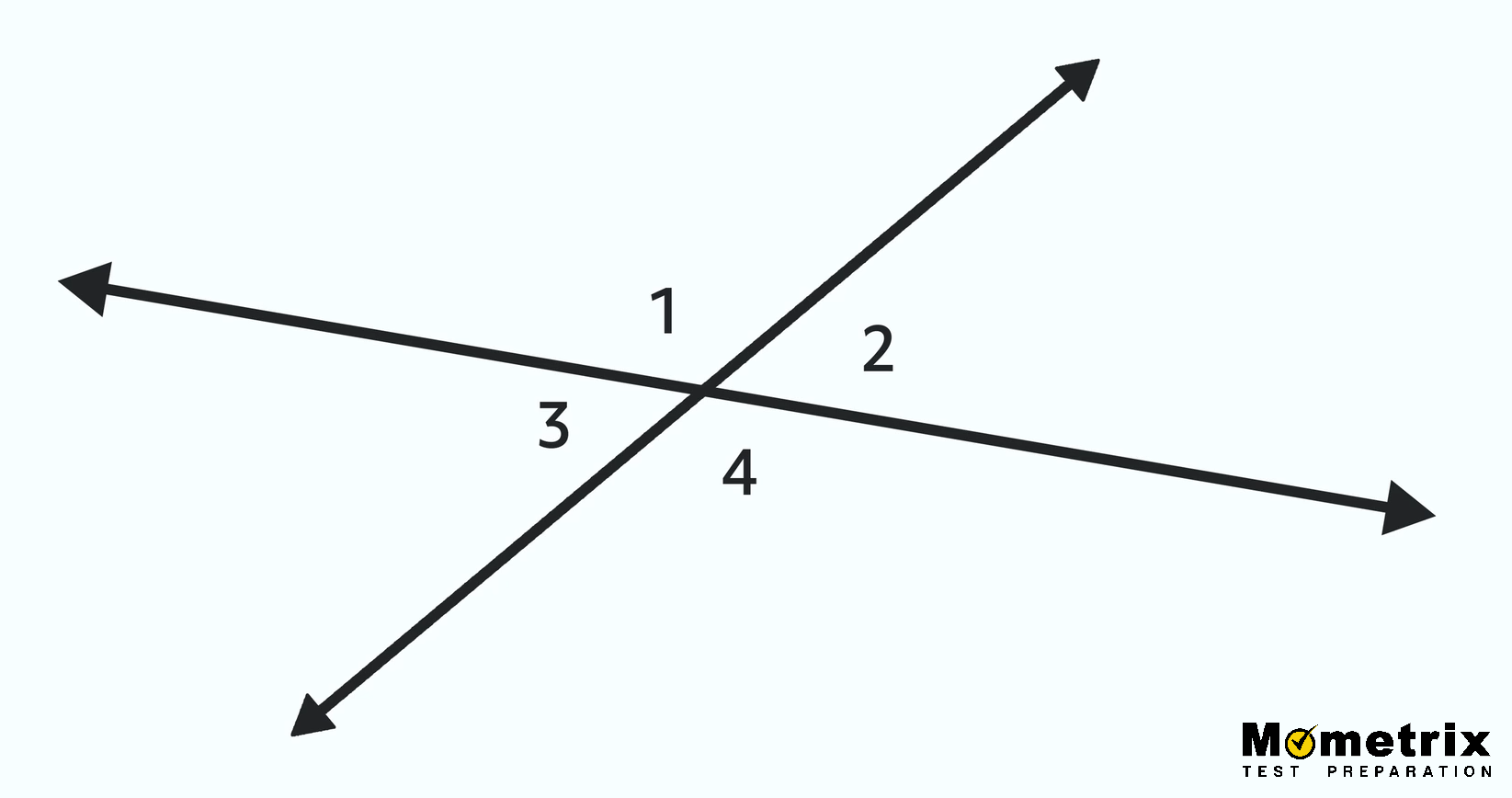 Whenever we see a figure like this, if we know any of the angles we can determine all of the others! So if ∠1 measures 130°, we can figure out ∠2 because those two angles together form a line and are a linear pair and supplementary. So ∠2 must be 50°. The same works for angles 1 and 3. And then we can use what we know about ∠2 to pair it up with ∠4 to find that angle. When it’s all said and done it looks like this: 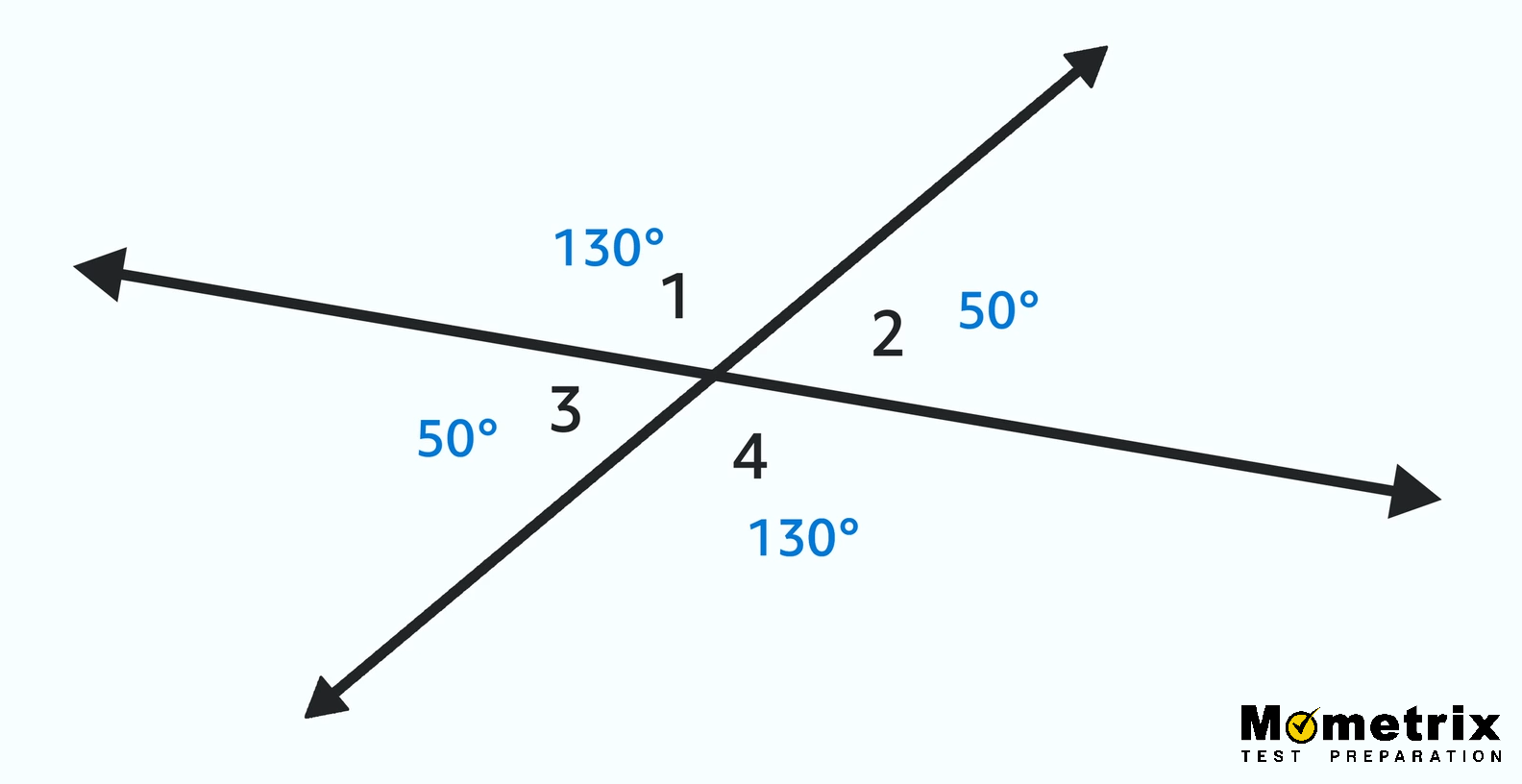 Notice that the angles opposite one another have the same measure. These angles are called vertical angles, and they’re always congruent, which is geometry-speak for having the same measure.

This is called a transversal. Once again we’ve numbered the angles, and there are red arrow marks on two of the lines, indicating that they are parallel. A transversal doesn’t have to have parallel lines but when it is, it allows us to know a lot about the eight angles created by the intersecting lines.

In the case of our diagram that does have parallel lines, if we know that ∠2 is 55° we then know that ∠6 is also 55°. And once we know that, we can use what we learned about vertical angles and linear pairs to find all the others:

That’s a lot to absorb in a small amount of time. Referencing the image above, try these questions to see if it has sunk in:

1. What is the alternate exterior angle to ∠8?

The alternate exterior angle to ∠8 is ∠1.

2. What is the same side exterior angle to ∠7?

The same side exterior angle to ∠7 is ∠1.

3. What is the corresponding angle to ∠5?

The corresponding angle to ∠5 is ∠1.

Thanks for watching, and happy angling!

What are complementary angles?

Complementary angles are two angles whose measures add up to 90 degrees.

What is a supplementary angle?

What are vertical angles? 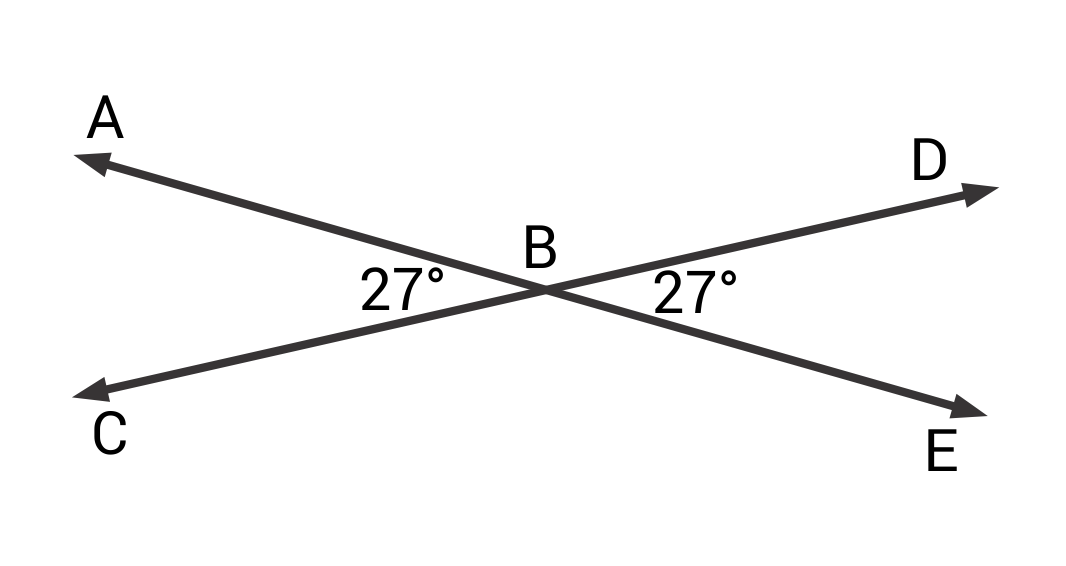 What are corresponding angles?

∠1 and ∠2 are corresponding angles.

What is an acute angle?

An acute angle is an angle whose measure is less than 90 degrees.

How do you find the angle of a triangle? 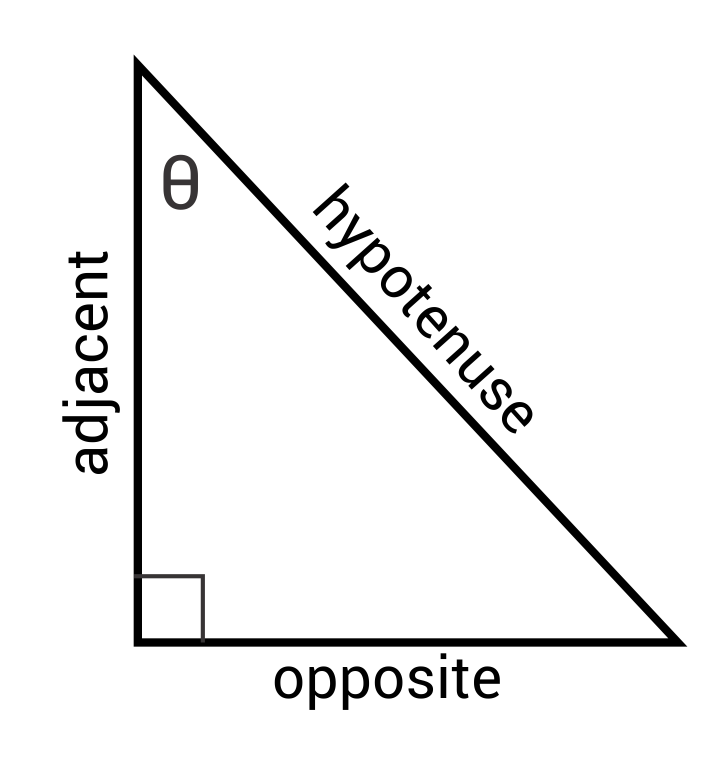 Ex. Find the value of ϴ. 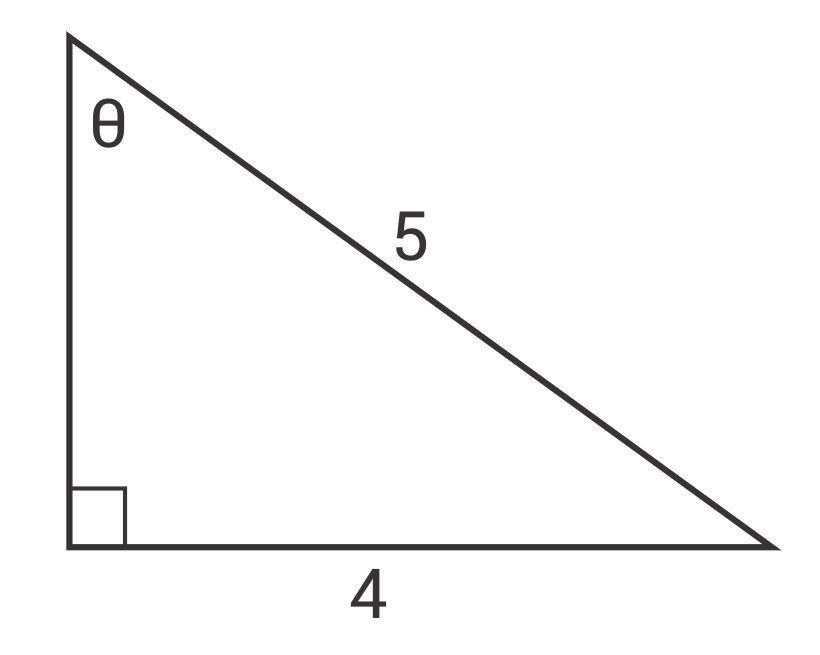 What is an obtuse angle?

An obtuse angle is any angle that measures greater than 90°.
Ex. 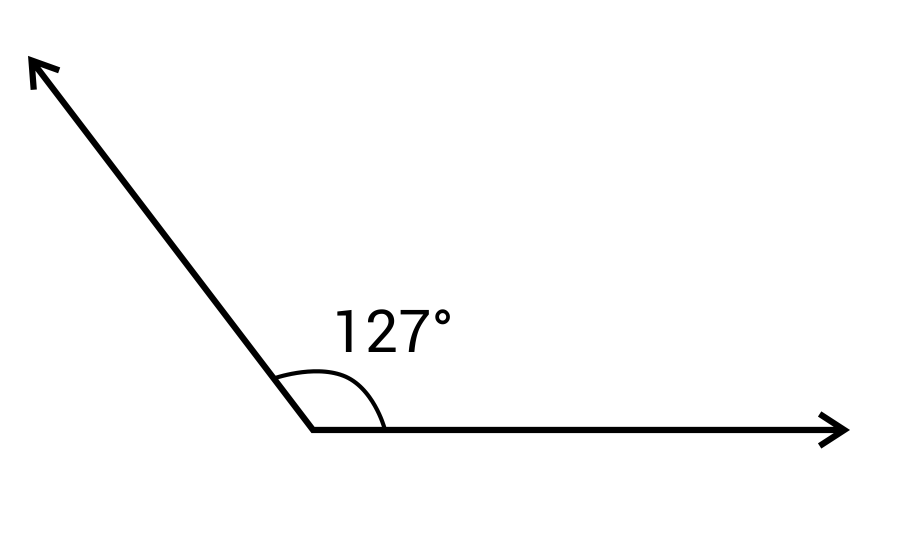 Which angle description matches the angle below? 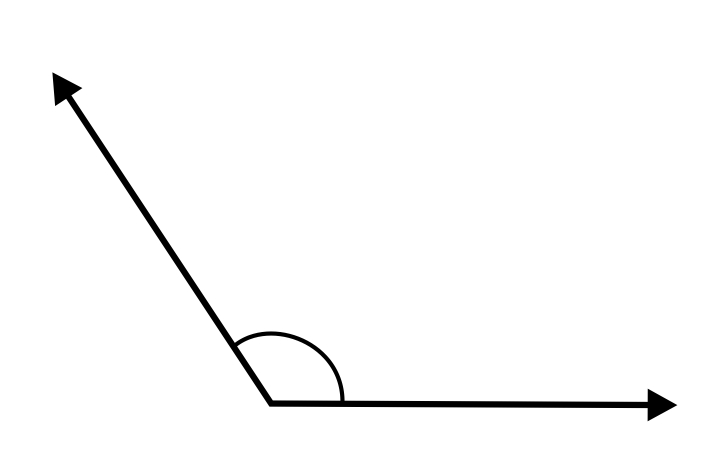 An obtuse angle has a measurement greater than 90 degrees but less than 180 degrees. 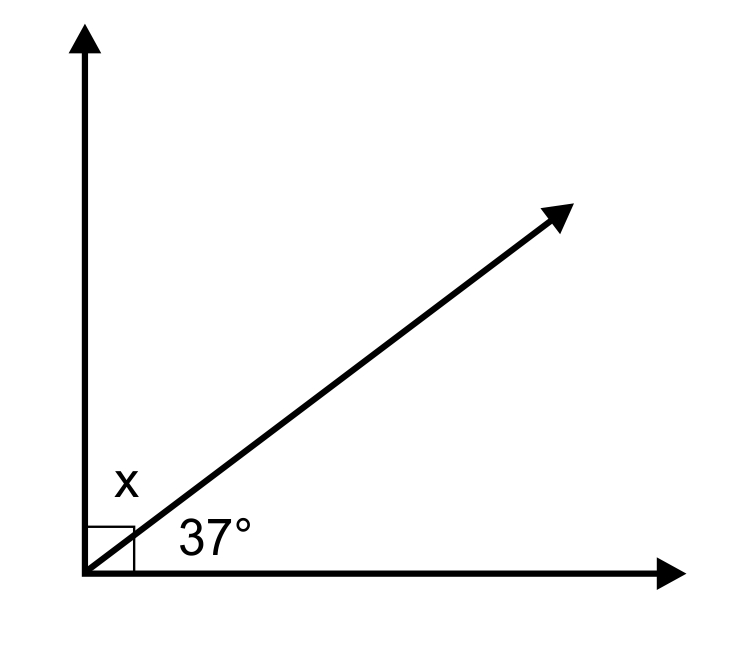 Which angle pair would be considered vertical angles? 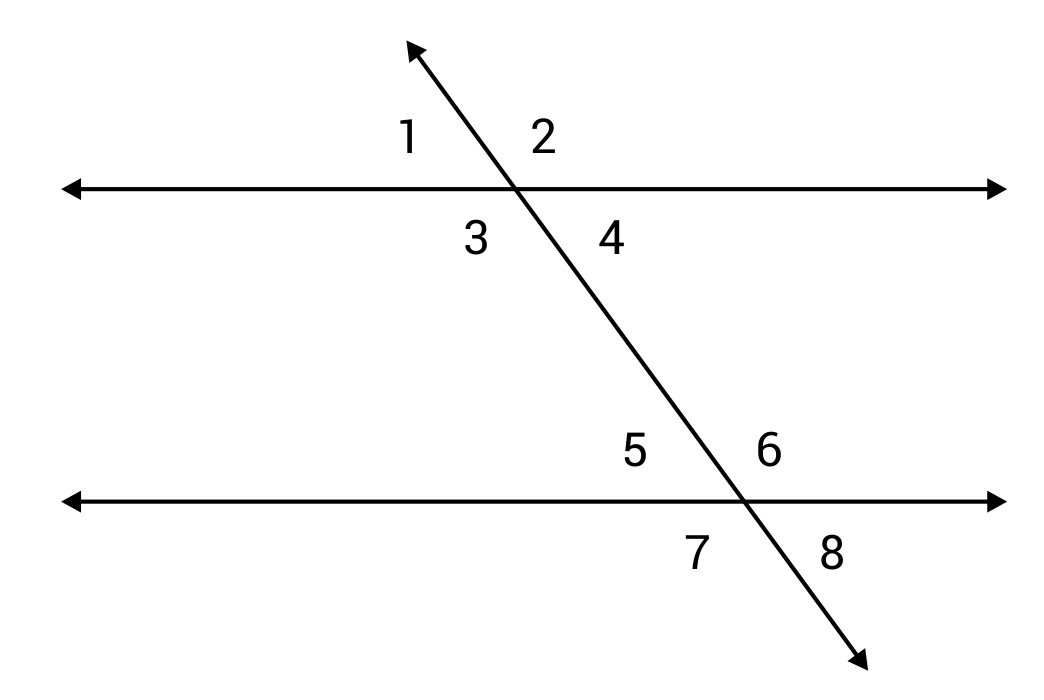 Each time the sprinkler is set up it waters one quarter of the entire lawn. This means that the sprinkler needs to be rotated four times in order to reach each section. \(90°×4\text{ sections}=360°\) (the total yard). 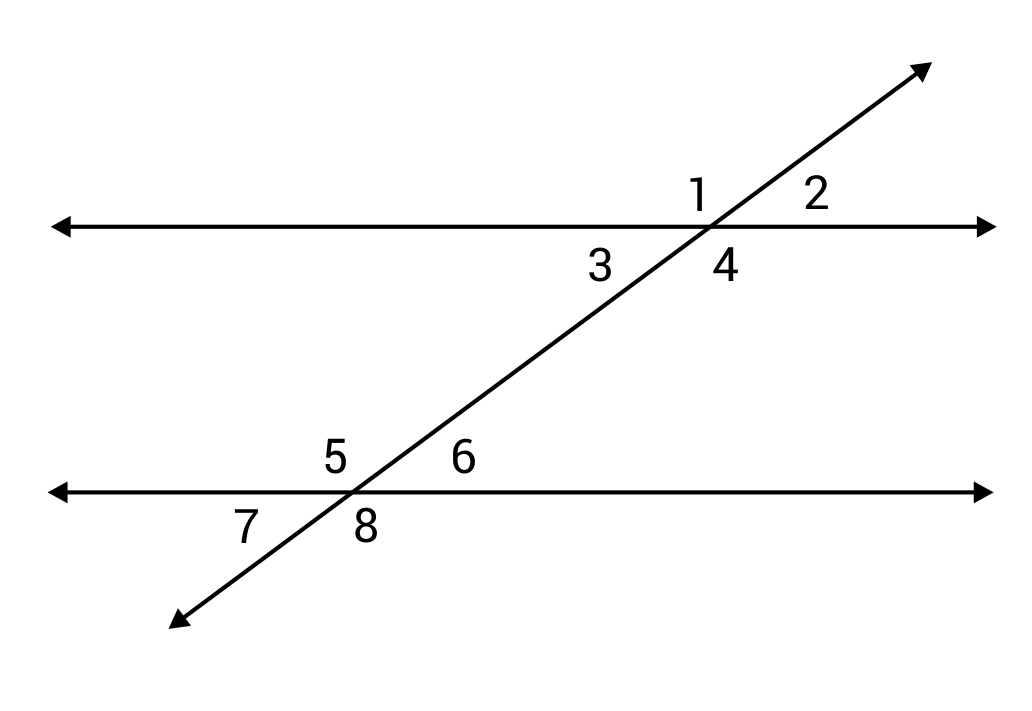