Where does Wind Come From?

Hi, and welcome to this video about wind! Today, we’ll be taking a look at where wind comes from, what different winds are called, and how wind systems called cells are formed. Let’s get started!

So to start, what is wind? Wind is simply moving air caused by differences in air pressure. Air pressure is something that varies greatly all across the planet.

Take a look at this map of the United States. You might recognize some things on this map, like cold fronts, warm fronts, or stationary fronts. 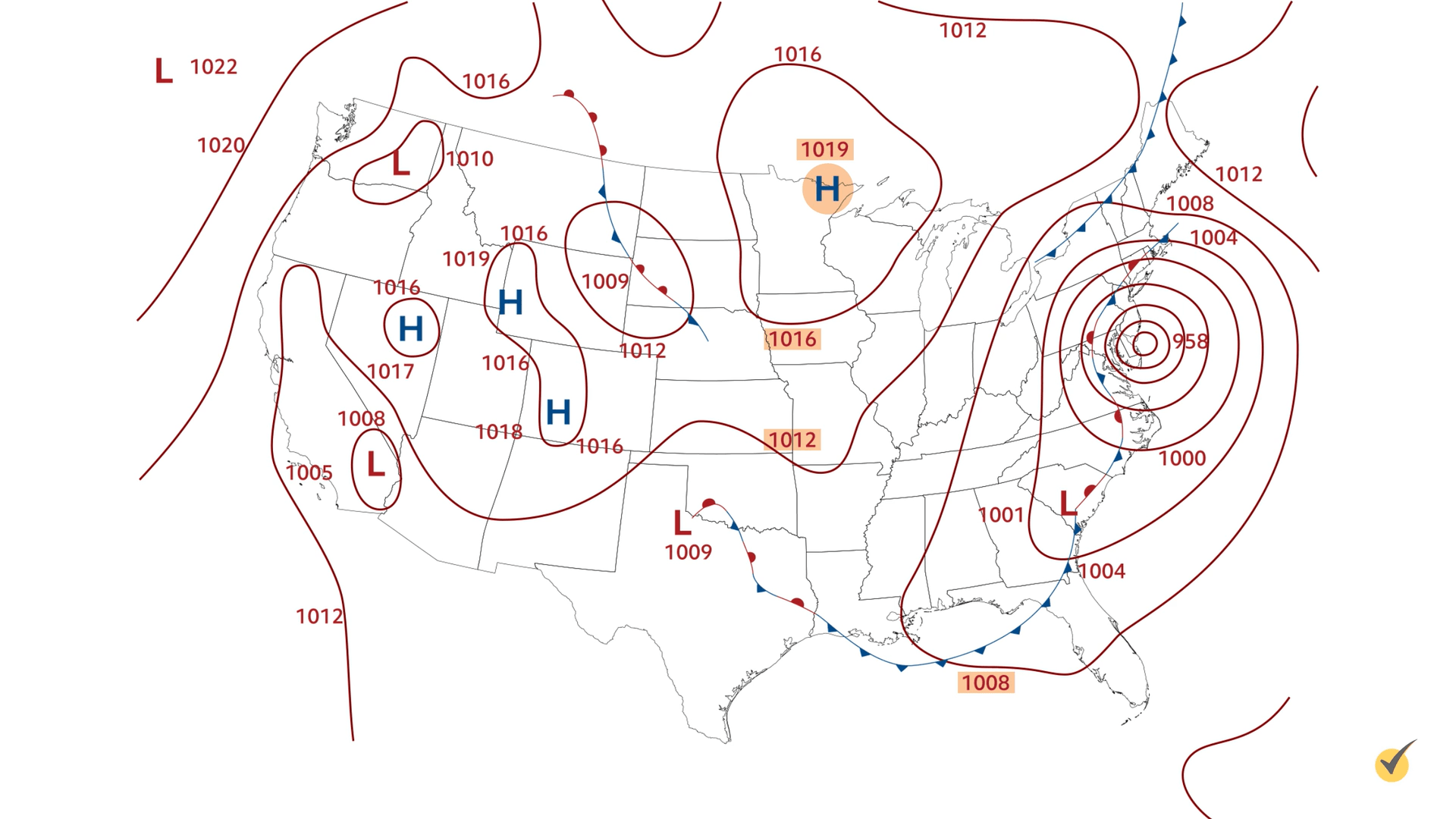 Let’s focus on the maroon-colored lines. These are called isobars! They represent areas of equal pressure, and they are labeled in millibars. Millibars are a measurement of pressure used by meteorologists to determine air pressure, which allows them to predict the weather. Now, focus your attention on the big blue H above Minnesota. This high-pressure system has a pressure of 1,019 mb. The next isobar below is labeled 1,016 mb, the next 1,012 mb, the next slightly east 1,008 mb, and so on. Air, like any other gradient, always flows from a higher concentration to a lower concentration. If we start at that H above Minnesota and follow our isobars from high to low values, we will see an air pattern that moves towards the southeast. Congratulations, you’ve just determined which way the wind is blowing!

Another important thing to note about pressure gradients and isobars is that the bigger the pressure difference, the faster the air will flow. When there is a large difference in air pressures, you have a steep gradient. This will be marked by tight isobars, as you see on the eastern coast of the United States here. When there is not a large pressure difference between two areas, we have a weak gradient, and wind speeds will be light. When you see an isobar map with very spaced out isobars, you’ll know it’s a weak gradient as you see throughout the mid-US on this map. 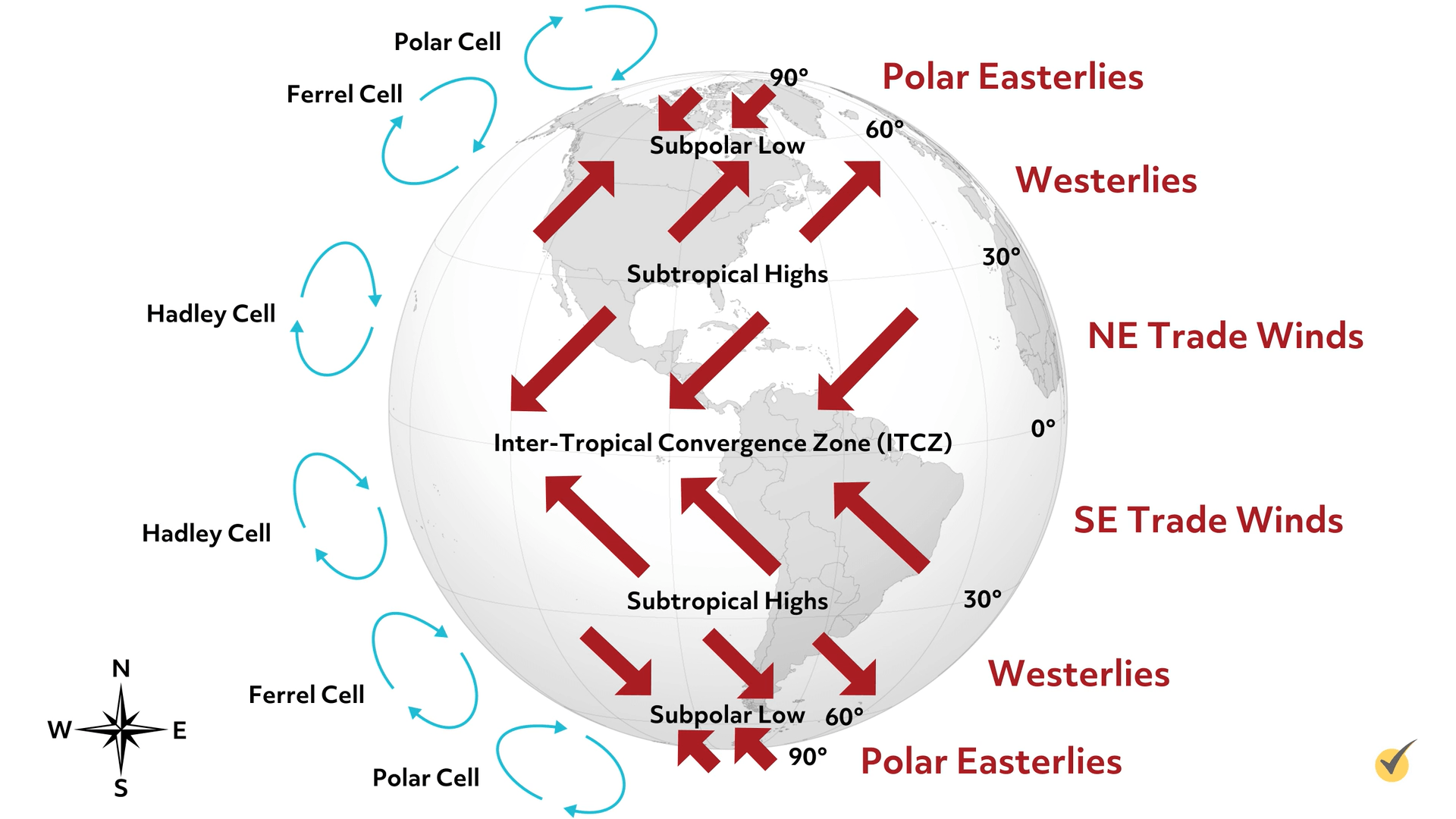 The prevailing winds that come from the west and are blowing toward the east are called “westerlies,” and they are found in the mid-latitudes, located at 30-60 degrees. In the Northern Hemispheric tropics (near the equator), we have prevailing northeasterly trade winds. In the Southern Hemispheric tropics, we have prevailing southeasterly trade winds. Trade winds, also known as Tropical Easterlies, are located at 0-30 degrees latitude and converge near the Equator, and we’ll discuss that a little later.. In the polar regions, we have prevailing polar easterlies, which blow from 60-90 degrees latitude.The general circulation of the wind is divided into three wind belts: Tropical Easterlies, Prevailing Westerlies, and Polar Easterlies. Between these two lines of latitude, we have convection cells. In a convection cell, air moves up, over, down, over, and back up, in a cycle. Depending on the wind belt, these convection cells move in different ways.

First, notice the red arrows indicating prevailing winds within wind belts. As I said before, we have polar easterlies, mid-latitude westerlies, Northern Hemisphere northeasterly trade winds, and Southern Hemisphere southeasterly trade winds. Where the polar easterlies and mid-latitude westerlies come together, we have a band of low-pressure called the subpolar low. We have this in both the Northern and Southern Hemispheres. As two air masses converge, the air has nowhere to go but up, producing clouds, storms, and low-pressure systems that affect the Pacific northwestern United States, and much of Europe. Ever wonder why England and Oregon are so dreary and rainy most of the time? This is why!

Next, note the arrows moving away from each other at the mid-latitudes. As air masses move away from each other, we have high-pressure systems and generally good weather. In both the Northern and Southern Hemispheres, these bands are known as the subtropical highs.

As mentioned before, at the Equator, where the trade winds meet, we have what’s known as the Inter-Tropical Convergence Zone, or the ITCZ. Again, because two air masses are converging, we have a low-pressure zone that produces clouds, storms, and heavy rainfall. Just to prove this point, look at this map of the world’s rainforests, and notice their location with regard to the equator and therefore the ITCZ. 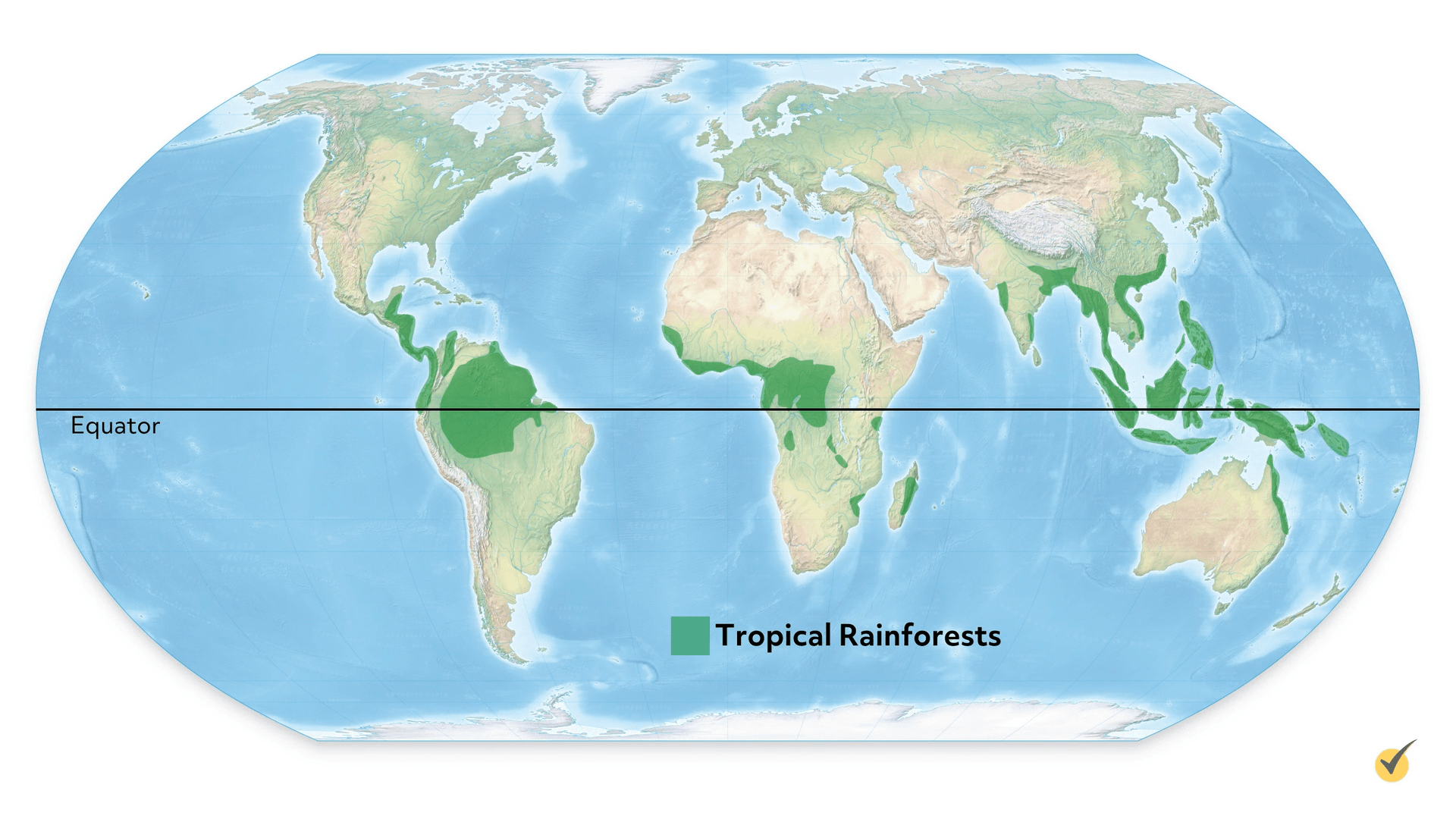 You’ll see they match up perfectly.

Now, let’s talk about those convection cells and how they move. 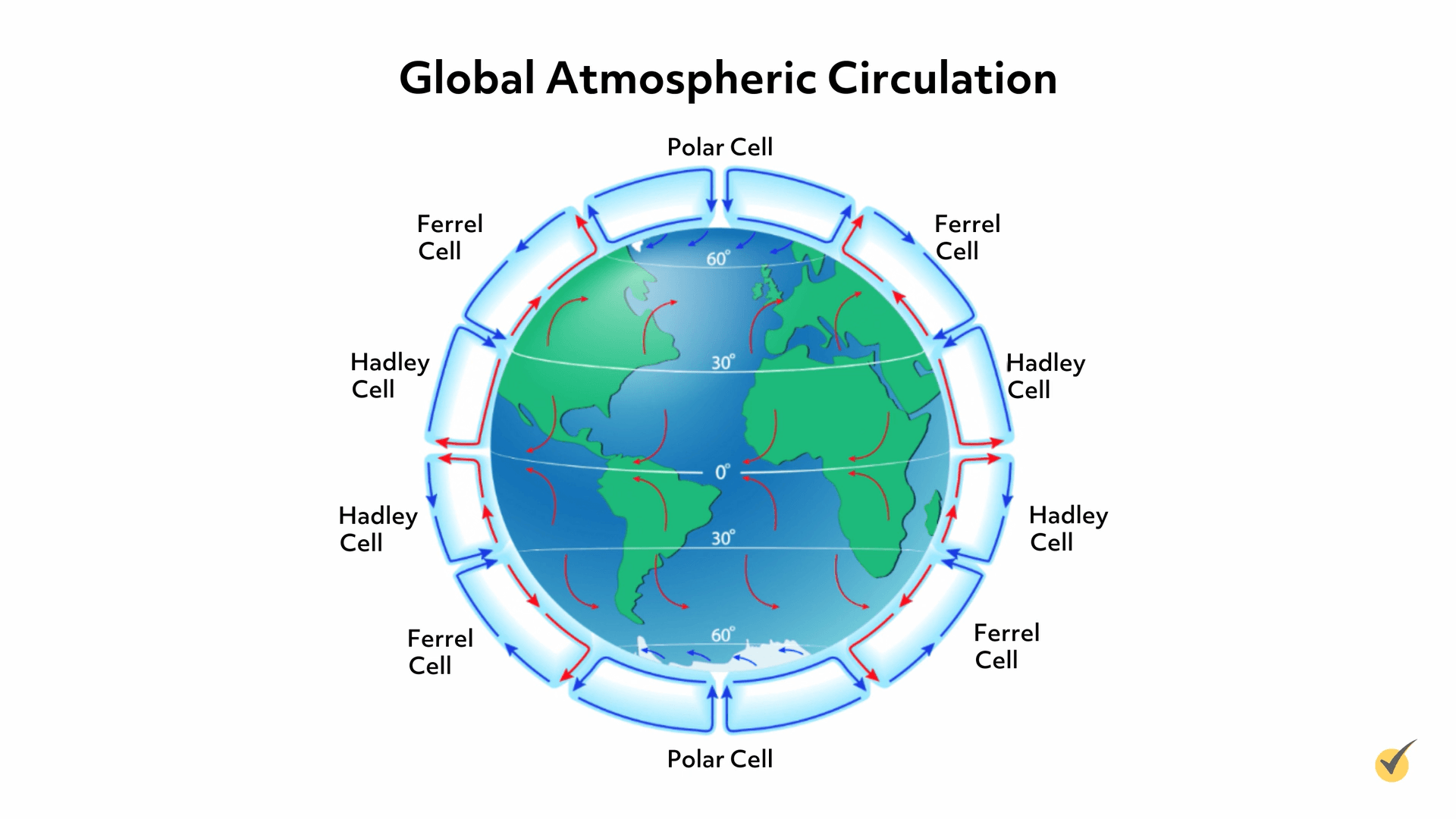 Note on the diagram the red arrows, indicating warm air, coming together, and then moving upward. As this air rises and cools, it moves poleward toward the mid-latitudes, and then sinks. Remember, cold air sinks because it is more dense. Because of the northeasterly trade winds, air will then flow back toward the Equator, and voilá! A cycle of the Hadley cell.

Next up is the Ferrel cell, found in mid-latitudes. Because of the divergence in air masses here, we have air that is heated by the ground in mid-latitudes moving poleward. When it meets the polar air mass, it is forced upward. Remember, this produces a low-pressure band called the subpolar low. As the air rises and cools, it will move south back toward the mid-latitudes, where eventually it sinks. Again, the sinking motion causes a band of high pressure. The warm air will then make its way poleward, having completed a cycle of the Ferrel cell.

Last but not least, we have the polar cell. The polar cell is much like the Hadley cell, but smaller and more shallow. Converging air masses at about 60° latitude force cold air upwards, once again producing that low-pressure band with clouds and storms. The air cools even more as it moves toward the poles and then sinks. Sinking air equals high pressure, so we have polar highs near both the north and south pole. 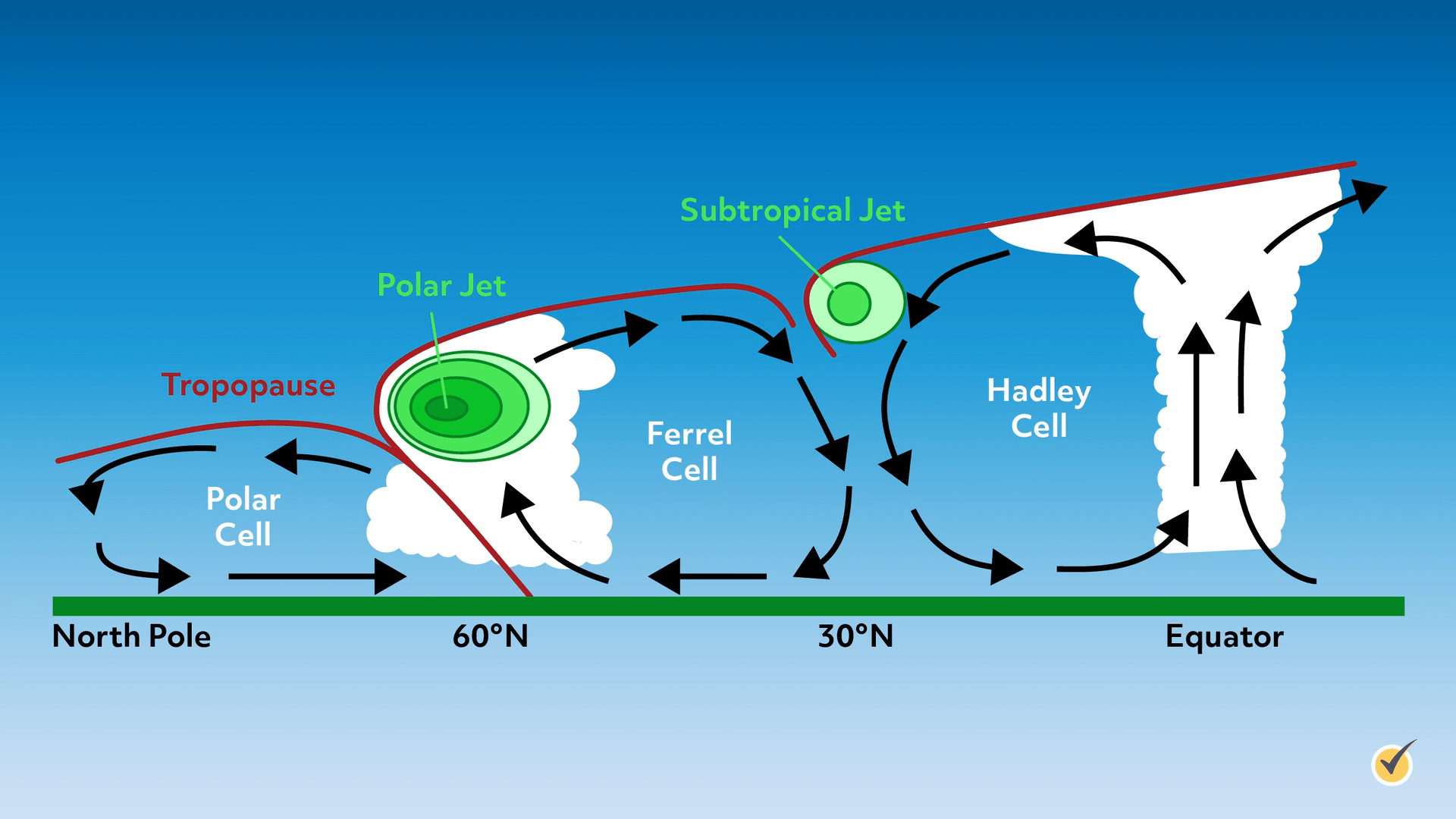 Here’s a cross-section of these cells, so that you can get a sense of their size, depth, and the height of clouds they produce. One thing you’ll notice in this image is the presence of jet streams, which we haven’t talked about yet. Let’s quickly go over jet streams and how they may influence wind flow in the upper atmosphere.

Jet streams are fairly narrow bands of fast-flowing air in our upper atmosphere, roughly 5 to 9 miles above Earth’s surface. There are four main jet streams that encircle our planet: two polar jet streams and two subtropical jet streams. They’re found in regions where cold air masses meet warm air masses. Jet streams feature wind that blows from west to east, due to Earth’s rotation. Sometimes, though, the bands may shift north and south, depending on the boundaries between air masses.

At the subpolar low, very cold air from the poles meets with warmer air from the mid-latitudes. As this air is forced upward, we have a jet stream that can help transport weather systems toward the west. Because of the stark difference in air mass temperatures, these jet streams are the strongest.

The subtropical jet streams are located where warm equatorial air meets the slightly cooler air from the mid-latitudes. When tropical air is forced upward at the Equator, it moves poleward. However, it doesn’t do so in a direct route. Our planet is spinning, and we have something called the Coriolis effect. The air does move poleward, but it sort of spirals around the globe to get there.

This band of “spiralization” is what we call the subtropical jet!

Okay, before we go, let’s wrap things up with a quick review of what we’ve discussed, then we’ll try out some review questions. Winds are the result of air moving by convection. Masses of warm air rise, and cold air sweeps into their place. As the warm air moves, it eventually cools and sinks. The term “prevailing wind” refers to a regional wind that usually blows in a single direction. Dominant winds are the winds with the highest speeds in a particular area at a particular time. At the higher and lower latitudes, the direction is easterly, and at mid-latitudes, the direction is westerly. Belts or bands that run latitudinally and blow in a specific direction are associated with convection cells. Hadley cells are formed directly north and south of the Equator, Ferrell cells occur at about 30° to 60°, and polar cells occur at about 60°. Jet streams are fairly narrow bands of fast-moving air in our upper atmosphere, found in regions where cold air masses meet warm air masses.

1. What is the name for an area of latitude that has the same prevailing wind?

The correct answer is C, wind belt. The wind belts include polar easterlies, mid-latitude westerlies, and the equatorial trade winds.

2. Which jet stream is stronger, and why?

The correct answer is B. The polar jet stream is stronger because the difference in temperature between polar air masses and mid-latitude air masses is greater than that between the mid-latitudes and tropical regions.