What Makes up a Tornado?

Hi, and welcome to this video on tornadoes! Today, we’ll be looking at several different types of tornadoes, how they are formed, and what we use to measure them. Let’s get started!

Let’s actually take a look at some of the loss that we’re talking about, here.

What you’re seeing here is damage caused by an EF5 tornado, which completely leveled the town of Greensburg, Kansas in May of 2007. This destruction was caused by 300 mph winds over the course of 3 days. Needless to say, tornados can be pretty intense.

Now that you’ve seen some of the damage that these storms can leave in their path, let’s talk about what they are and how they’re formed.

Under certain conditions, cumulonimbus clouds can quickly develop into severe storms known as supercells, which could potentially produce a tornado.

This is what a supercell looks like in real life. Let’s dissect this a bit and see what’s going on inside. 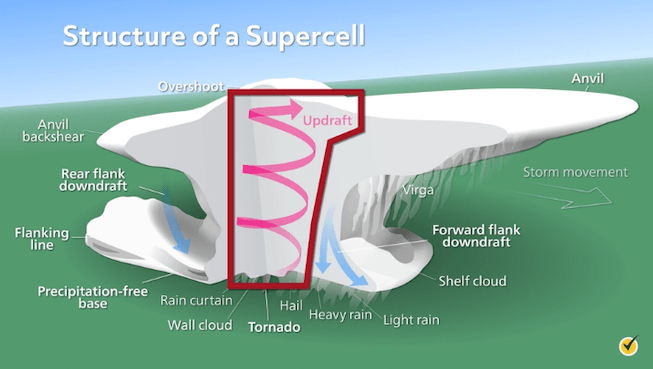 One of the main features of a supercell is this persistent updraft here in the center. An updraft is a column of upward moving air. You’ll notice that this air is rotating, which is another very important feature that makes this different from a normal thunderstorm.

One of the factors of tornado formation within a supercell is a strong downdraft. Downdrafts are usually on the tailing end of a supercell, and they are caused by rainfall.

You can see the downdrafts here, noted by the downward blue arrows. These cold, dense downdrafts will eventually focus the rotation of the supercell, and potentially force it to the ground, creating the tornado.

We’ve now gone through the first three stages of tornado development: storm development, storm organization, and tornado formation. The last stage is tornado dissipation, where the downdraft will basically wrap around the tornado and cut off the air supply to the updraft. With no warm air, upward convection ceases, and the funnel thins and retracts upwards. And just like that, the tornado is gone.

One thing you might notice when you look at these pictures is that the tornado itself is quite small compared to the overall supercell system. However, it is important to note that the size of a tornado gives very little indication of its strength. Contrary to popular belief, tornadoes are not measured by their size, nor are they measured by their duration or wind speed. They are measured on the Enhanced Fujita Scale by the damage they caused. The Enhanced Fujita Scale ranges from EF0 to EF5.

The EF ratings for tornadoes are assigned rough estimates for wind speed, but are not rated by their wind speed. 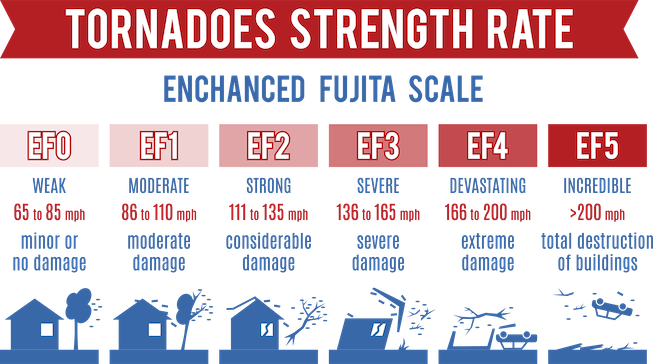 As you can see, EF0 tornadoes do light damage, while EF5 tornadoes can do incredible damage, like we saw in Greensburg, Kansas.

Kansas is a part of an area of the U.S. known as “Tornado Alley”, which we’ll get to in a moment. First, let’s highlight another significant area of tornado occurrences in the United States, called Dixie Alley. Dixie Alley consists of a handful of southern states that you’ll see highlighted on this map.

This map shows the Storm Prediction Center forecast on the eve of one of the deadliest tornado outbreaks in recent history – April 27th, 2011 through April 28th, 2011. You’ll see these color-coded areas which represent areas of increased risk for tornadoes. The green represents thunderstorm risk, yellow is slight risk, red is moderate risk, and pink represents high risk for tornadoes.

This map indicates where tornadoes actually occurred on these dates.

You will see immediately that, while the map was not perfect in predicting tornadoes, it was pretty darn good. All the red dots on this map indicate tornadoes. Notice that they are largely focused in the high and moderate risk areas as indicated on the previous map.
Okay, that was Dixie Alley. Now let’s talk about Tornado Alley. In the very beginning of this video, I mentioned the convergence of air being the reason that tall cumulonimbus clouds form. The location of Tornado Alley provides near perfect conditions for this phenomenon.
This area – consisting mainly of Texas, Oklahoma, Nebraska, Kansas and South Dakota – is situated directly between two converging air masses.

As you can see, warm moist air is brought northward from the Gulf of Mexico; while cool dry air flows southward from Canada. When these two air masses come together, there’s nowhere for them to go but up. The upward movement will result in the development of very tall clouds; and with the right wind conditions, supercells and tornadoes are more likely to spawn.
Now, as you can imagine, there are lots of different types of tornadoes.

There are wide tornadoes…

Let’s talk about these special types of tornadoes a little more in-depth
Multiple vortex tornadoes contain many smaller-looking tornadoes that all rotate around one big vortex. Think of the vortex as the central part of the tornado that is spinning and has upward suction. In some tornadoes, there are multiple smaller vortices, called sub-vortices, that all spin around the main one. Most of the time, multiple vortex tornadoes form at the start of their lifecycle, before one singular concentrated vortex has developed.

Satellite tornadoes are also a multi-vortex phenomenon, but wildly different from what we just talked about. Sometimes, a smaller tornado will develop and begin to rotate around a larger one. The smaller tornado develops from the same supercell, but is considered independent; unlike a multiple vortex tornado.

A waterspout is simply a tornado that forms over water, or moves from land to water. They behave as a normal tornado otherwise, they’re just filled with water instead of dirt.

Okay, now that we’ve covered everything, let’s go over a few review questions to see what you remember!

1. How is the severity of a tornado measured?

The correct answer is C, damaged caused. While wind speed “guidelines” are assigned to each EF Scale rating for tornadoes, they are not solely based on this metric. Tornado evaluators actually go out to survey the damage and assign a damage indicator, which is basically a number assigned to the toughest thing the tornado destroyed.
2. What is not a necessary part of tornado formation?

This was actually a trick question! They’re all needed for tornado formation. Without any one of these components, you’ll likely just have a nasty thunderstorm, but no tornado!