What Was the Holocaust?

The Holocaust was a systematic Nazi killing operation during World War II, which saw the mass murder of 6 million Jews and millions from other groups deemed unwanted or asocial. This is a subject that could be explained in enormous detail, but for today, we’ll be looking at a more general overview of the events that took place 80 years ago.

The origins of the Holocaust can be traced to Adolf Hitler and his book Mein Kampf, first published in 1925, in which Hitler expressed his hatred of communism and Jews. For Hitler and his Nazi Party, both of these hatreds went hand in hand, since many Jews had played prominent roles in the rise of communism in Russia, and communism subverted the national mythologies which were so important to German fascism.

Hitler’s ideology gained significant support for the Nazi Party not only from segments of the German population who were anti-Semitic or anti-communist or both, but also from powerful corporate bosses fearful of communism because of its goal of nationalizing industry under the control of labor. Shortly after Hitler became Chancellor of Germany on January 30th, 1933, the German government passed the Enabling Act, which gave Hitler broad powers of decree. Armed with tyrannical authority, Hitler’s government established its first concentration camps around this time to imprison German communists and associated leftists. But soon after, perhaps by 1937, Jews were also being deported to these camps, because many German leftists had Jewish backgrounds.

Meanwhile, Nazi bureaucrats were enlisted to create and then put their legal stamps of approval on decrees depriving Jews in German-held territories of their civil liberties, starting with the Nuremberg Laws of 1935. German corporate conglomerates, with executives closely tied to the Nazi leadership, fired their Jewish employees and stole their wealth. After the German invasion of Poland in September 1939, the government instituted ghettos across Reich territory and deported Jews to these isolated quarters. As World War II went into full swing and Germany conquered more territory, more Jews were deported to ghettos or directly to the concentration camps that were established for the purpose of holding large numbers of people.

After Germany invaded the Soviet Union in June 1941, death squad troops called Einsatzgruppen followed and routinely massacred potential political enemies, including many Jews. At some point in that same year, Hitler himself had decided on a program of mass extermination of Jews in Europe. The top-secret Wannsee Conference, held on January 20th, 1942, resulted in a series of directives that made large-scale killing of Jews – on the basis of their Jewish ethnicity, not their political views – an official policy of the German government, to be carried out rigorously by members of the German military and security services. Systematic killing operations at the Chelmno camp in Poland began the same month. This turning point launched the most brutal part of the Holocaust.

Jewish prisoners of the Nazis were starved and enslaved to work in awful conditions for German corporations. The personnel who ran the camps then killed them hundreds and even thousands at a time, using chemical gases and mass shootings. IG Farben, formed in the 1920s from a merger of six German chemical companies, conscripted at least 30,000 death-camp inmates at Auschwitz as slave laborers. And this corporate behemoth was the producer of the notorious Zyklon B gas, responsible for more than a million deaths during the Holocaust.

In addition to Chelmno, the main Nazi death camps were Treblinka, Bełżec, Sobibór, Auschwitz, and Majdanek (all of which are in modern-day Poland) and Maly-Trostenets (which is in modern-day Belarus). Prisoners were massacred with Zyklon B, fumes from internal-combustion engines, gunfire, or exhaustion and starvation. Smaller camps, like Dachau and Buchenwald in Germany, peppered the entire Third Reich and operated as standalone slave-labor centers and/or waystations for eventual transport of prisoners to the main death camps. 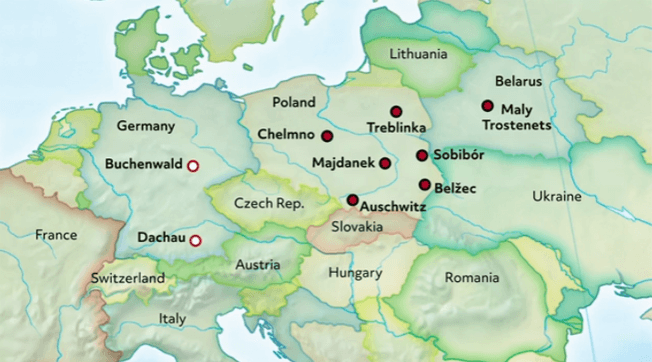 These extermination policies primarily but not exclusively targeted Jews. The lower-range estimate for the number of Jewish dead is 6 million, but at least 5 million non-Jewish prisoners were also systematically murdered at the vast Nazi network of camps, by the methods already mentioned.

In July 1944, the westward-advancing Soviet Red Army discovered the abandoned skeleton of the Majdanek camp, the first Nazi death camp to be liberated by an Allied power. As the Allies closed in on Berlin from the east and the west, liberation of the other camps followed, including Auschwitz by the Russians in January 1945, and, in April of that year, Bergen-Belsen by the British and Dachau by the Americans.

The Allied policies of denazification were among the most important consequences of the Holocaust. Soviet forces carried out arguably the most thorough and consistent policy of denazification in their zone of occupation in eastern Germany. Under the supervision of the Soviet secret police, thousands of Nazi officials and party members were moved to internment camps, while large German landowners, many of whom were Nazi supporters, had their assets seized by the Soviet administration.

By war’s end, roughly 230,000 Jewish refugees and survivors of the Holocaust were detained as Displaced Persons throughout Europe, and with the majority ardently pressing for resettlement in Palestine, the cause of Zionism gained urgency that it couldn’t have otherwise. The State of Israel came into being on May 14th, 1948 and quickly opened its borders to those Jewish Displaced Persons. This population influx, combined with German payouts of $745 million to Israel from 1953 to 1966 as reparations for the Holocaust, allowed the new country to survive and thrive. In the words of David Ben-Gurion, Israel’s first prime minister, the Holocaust “…proved anew the urgency of the reestablishment of the Jewish State.”

Hopefully this review was helpful to your understanding of the Holocaust. Thanks for watching, and happy studying!