Hi, and welcome to this video on using substitution and elimination to solve linear systems!

“Solving” a system of equations means to determine the exact \((x,y)\) coordinate that satisfies both of the equations in the system. The process of solving a system depends on the structure of the equations. Some systems can easily be solved by graphing both equations and determining the exact point of intersection, while other systems are more suitable to be solved

This video will focus on two of the algebraic approaches, namely substitution and elimination.

To solve a system of two equations with two variables, we are trying to find the exact point that satisfies both equations. What do I mean by “satisfy”?

That means that if you substitute that point into BOTH equations, you will have a “true” statement.

We also already mentioned that the “structure” of the system will determine which of the solving methods to use.

The substitution method is typically used when one of the equations in the system is already solved for one of the variables. When this is the case, you can substitute the expression that the variable is equal to into the other equation:

Note that after the substitution, the \(y\)-variable is no longer in the equation.

At this point, we solve for \(x\) by distributing the coefficient of 2 into the parentheses.

At this point, we are halfway to our solution. In order to determine the \(y\)-variable, simply substitute \(x= -3\) into either of the original equations. Substituting into the first equation gives the quickest solution:

Let’s practice the substitution method by looking at one more problem together:

To check your work, simply substitute this ordered pair into both equations to verify that you get a true statement.

Remember, these types of systems were well suited for the substitution method because one of the variables was already solved.

For systems of equations that have two equations in “standard form,” the elimination method may be preferred. Recall that standard-form equations have both variable terms on one side of the equation and constant terms on the other.

The overall concept of this method is to “eliminate” one of the variables from the system by adding like terms of each equation together. A straightforward example of the elimination method is shown:

Solve for \(x\) by dividing both sides by 3, which results in \(x=3\). Now, as before, use this value to determine the value of \(y\) by substituting \(x=3\) into either of the original equations. Let’s use the second equation of the system because it is fairly simple:

As mentioned, that example was fairly straightforward because the coefficients of the \(y\)-variables canceled out when added. When coefficients do not cancel, you can use the Multiplication Property of Equality to multiply the equation by whatever value you need to eliminate.

To wrap up, let’s see if you remember which method of solving would be most appropriate for the following systems:

The correct answer is substitution.

For this one, you would use substitution, since \(y\) is solved in the second equation.

The correct answer is elemination.

For the second one, we’d use elimination, since both equations are in the standard form and the \(y\)-term is eliminated by adding.

Elimination is a great choice for this problem because we can see that -9y and 9y will cancel out nicely. Let’s start by adding the two equations: 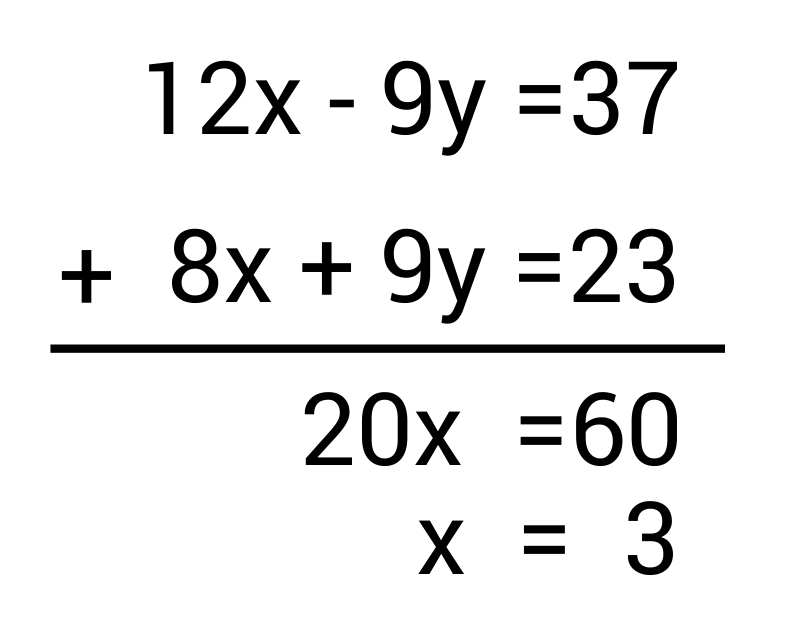 Farmer Frank has 35 pigs and 65 chickens on his farm.

Mr. Parker wanted to treat his family so he took them all out to a movie. There are 15 people in his family including himself. The adult tickets were $10 and the children tickets were $5. The total ticket cost was $110. How many children and how many adults are in the family?

The correct answer is D: 8 children and 7 adults.

There are 8 children and 7 adults in the family.