Hi, and welcome to this review of the Southern Colonies! In this video, we will primarily focus on the economies, education, and social structures of the colonies south of the Mason-Dixon line, as we look at how the colonies were formed and evolved over the course of the 17th and 18th centuries. Let’s get started!

The Southern Colonies represented five of the original thirteen and contained both the first and the last colony founded prior to the American Revolution. 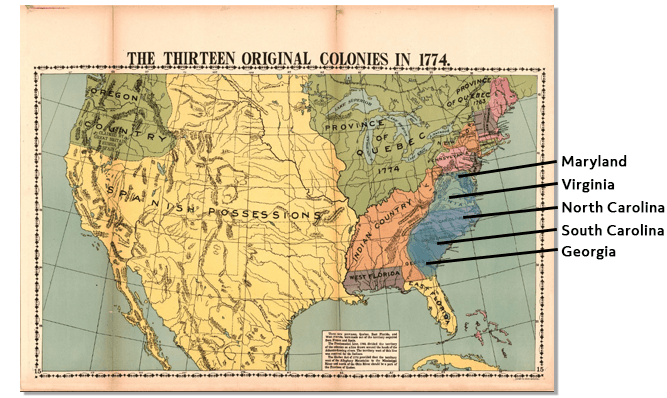 The first English attempts to colonize the Americas occurred toward the end of the 16th century but without success. After the mysterious disappearance of the colony at Roanoke in 1590, the first permanent colony gained a foothold in the New World in Virginia. King James, ruler of both Scotland and England, granted the Virginia Company a charter to establish a colony in North America in 1606. The first permanent settlement, Jamestown, was established a year later.

The Colony of Jamestown

This colony endured a difficult beginning and very nearly befell the same fate as the other failed ventures. Fortunately, a shipment of supplies arrived from England in 1610 to save the colony from abandonment. The early colonists eked out a harsh existence beset by disease, hunger, and the harsh rule imposed by the governor. Severe punishments awaited any accused of shirking their duties while many others succumbed to illness and starvation within the first year.

The original system of collective farming proved unproductive and was replaced with an incentive around the allocation of private plots; in exchange for a period of labor and payment of grain, colonists were granted their own lands. This led to the development of the headright system. To encourage the migration of laborers, a substantial parcel of land was granted to any who could arrange for the arrival of a worker or servant to the colony. The system would be used by the other colonies which followed. An antagonistic approach to the native population led to conflicts; the Powhatan Uprising of 1622 saw the deaths of 347 colonists and came close to wiping out the colony altogether.

Maryland was the second of the Southern Colonies, named for the wife of King Charles I, Henrietta Maria. The charter to form the colony was granted in 1632 to George Calvert, but he died soon afterward. It was Calvert’s son Cecil who established the new colony. Maryland differed from Virginia by adopting a more conciliatory approach to local tribes. The exchange of goods and information helped the colony avoid the bouts of starvation suffered by the Virginian colony. This colony was the northernmost of the Southern Colonies; the demarcation between northern and southern colonies arose from a border dispute with Maryland and Pennsylvania in 1750. Two surveyors, Charles Mason and Jeremiah Dixon, were hired to settle the matter, and the line, which bears their names unintentionally, became the boundary between the north and the south.

The area which is now North and South Carolina was initially one colony, the Carolina Province. The province took its name from the Latin version of King Charles’ name, Carolus, and the territorial claims extended westward far beyond the modern boundaries. The northern and southern portions of Carolina began to take on differing characteristics. Due to the immense size of the province and the difficulty of governing such a large area, it was formally split into North and South Carolina in 1712. South Carolina was the more prosperous of the two and one of the most profitable of all the original colonies.

The last of the five Southern Colonies also bears the name of a British monarch, in this case George II. Georgia was also the last of the original thirteen colonies, founded in 1732. Georgia was originally intended to be a colony for those sentenced to debtors’ prison, but this was soon shifted. The state would become a buffer state between Spanish Florida and the jewel of the Southern Colonies, South Carolina. A series of forts were constructed along the border with Florida, and the Georgian colonists were successful in skirmishes with the Spanish.

As I mentioned earlier, the headright system was used to encourage more migration to the colonies. The main beneficiaries of this system were the landowners who could arrange for the passage of servants and slaves to the New World. The best lands were quickly monopolized by a small emerging aristocracy of planters. One of the most profitable exports was tobacco which thrived, despite royal efforts to curb its spread. King James I deeply disapproved of smoking, and wrote one of the first-ever anti-smoking pamphlets, “Counterblaste to Tobacco.” Describing it as a “vile and stinking custom,” the king imposed a tax on the import of tobacco from the Americas. Some members of the English parliament shared the king’s disgust for tobacco and the Virginia company’s most profitable venture was nearly banned entirely.

The cultivation of tobacco and other cash crops required the clearance of tracts of land and were labor-intensive to produce. To meet the labor needs of the colonies, large numbers of indentured servants arrived. As most workers could not pay for their passage across the Atlantic, they agreed to enter a period of unpaid service, typically 5-7 years, to work off their debt. A typical voyage would cost the equivalent of about 7-8 pounds of tobacco, but an indentured servant could produce up to 50 pounds worth of tobacco annually.

Not all of the indentured servants arrived willingly, though; some were abducted in the dead of night, and others woke up from a night of drinking aboard a ship bound for the Americas. Parliament decried the practice but never enacted effective legislation to stop it. Life for the indentured servants was harsh, and many did not survive their period of service. With no incentive to look after the long-term health of their servants, planters tried to get the most out of their temporary property. As awful as indentured servitude was, servants at the very least had the hope of freedom on the horizon.

The first Africans arrived in Virginia as early as 1619 as indentured servants, but later arrivals entered into a lifetime of bondage. Slavery was legalized in Virginia in 1661, while a code of laws introduced in 1664 in Maryland declared Africans slaves for life. Slavery was particularly extensive in South Carolina but not practiced in Georgia until 1751. Slavery surpassed indentured servitude over the course of the 17th century, and by 1690, slaves outnumbered servants around 4 to 1.

Slavery and indentured servitude were practiced in the other colonies but represented an integral part of the economy and society of the Southern Colonies. Often associated with the production of cotton, it was a different commodity which allowed South Carolina’s economy to really take off. Oryza sativa, rice originally imported from Madagascar, was known as “Carolina gold” as it was so prolific. A plot small enough to be tended by a single slave could produce enough rice annually to purchase another. Indigo was another lucrative staple of the Southern Colonies grown in the Carolinas and Georgia.

Women in the Southern Colonies

The role of women in the Southern Colonies evolved over time. Unlike the Puritans of New England, the first colonists of Virginia were mostly bachelors. It wasn’t until 1619 and later that women arrived in significant numbers. In their absence, one governor lamented over the colonists’ fraternization with native women and other acts “fearful to name.” Gender roles weren’t as clearly defined in the early colonial period as the practicalities of survival meant everyone needed to contribute. Life expectancy in the colonies was low but lower still for women due to the dangers of childbirth. About a quarter of all children born in the colonies died before their first birthday.

Over time, women came to manage the households and oversee the education of the children. As the population of the Southern Colonies was so widely dispersed, as few as ten families in a thirty-mile radius, education tended to be informal and left to the households. The children of wealthy planters were sometimes sent to England for their education while children of the lower classes tended to serve apprenticeships in lieu of a formal education. There had been plans for the construction of a school and a college in Virginia as early as 1621, but these never came to fruition. William and Mary College, named after the co-monarchs of the time, was established in Virginia in 1693. It was the first college established in the Southern Colonies and the second in the Americas after Harvard.

All right, to wrap up this review, let’s go over a few practice questions:

1. Which of the following is NOT one of the Southern Colonies?

The Southern Colonies were Maryland, Virginia, North Carolina, South Carolina, and Georgia. Florida was controlled by the Spanish during this time and would become a territory of the United States in 1821.

2. Which of the following commodities helped drive South Carolina’s economy in the 18th century?

A plot small of the “Carolina gold” that was enough to be tended by a single slave could produce enough rice annually to purchase another.

3. What was the name of the system that offered tracts of land to settlers who would come to work the land?

The correct answer is A.