Hi, and welcome to this overview of seizures! In this video, we’ll look at what a seizure is and learn about the different types of seizures and how they’re treated.

So, what is a seizure? A seizure is abnormal electrical activity in the brain.

It happens suddenly and can be due to a variety of factors. Our nerve cells, like every other cell in our body, seek homeostasis or balance. While in balance, these cells have excitatory chemical reactions and inhibitory reactions going on at the same time. When this balance is interrupted, a seizure can occur.

The International Classification of Seizures differentiates between two main types: partial seizures which begin in one part of the brain, and generalized seizures which involve electrical discharges in the whole brain. However, it is understood that not all seizures fit neatly into these classifications and people may have more than one type of seizure.

Exact causes of seizures are varied and can be categorized as being acquired, derived from developmental defects, or idiopathic (meaning there is no known cause). 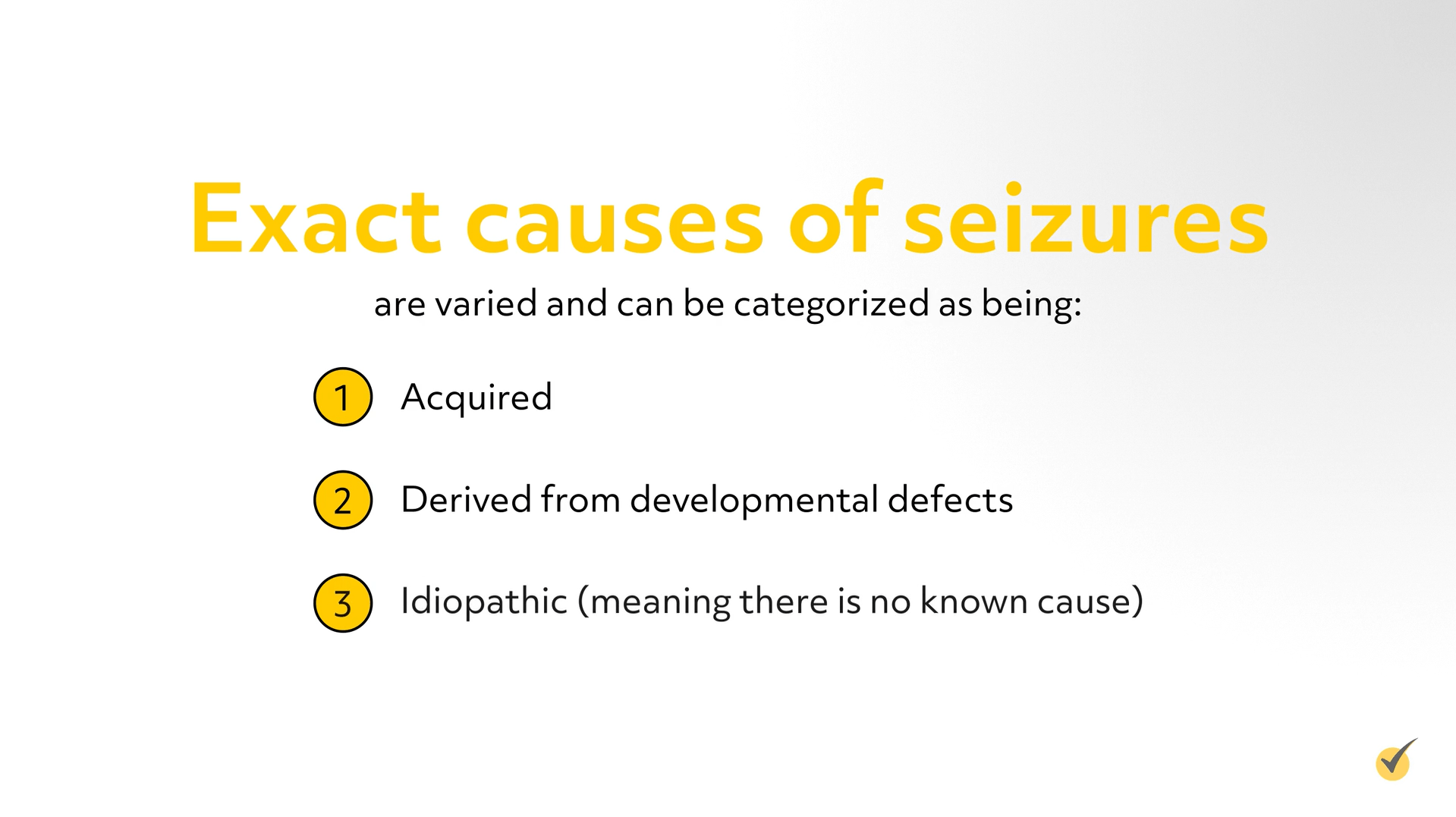 If the seizure is acquired, some causes include:

The initial pattern of the seizure indicates the region of the brain in which the seizure originates. Like I mentioned before, there are partial seizures and generalized seizures. Partial seizure occurs in a “part” of the brain, usually one side or the other of the cerebral hemisphere. Depending on the area of the brain that’s affected, different symptoms may occur. 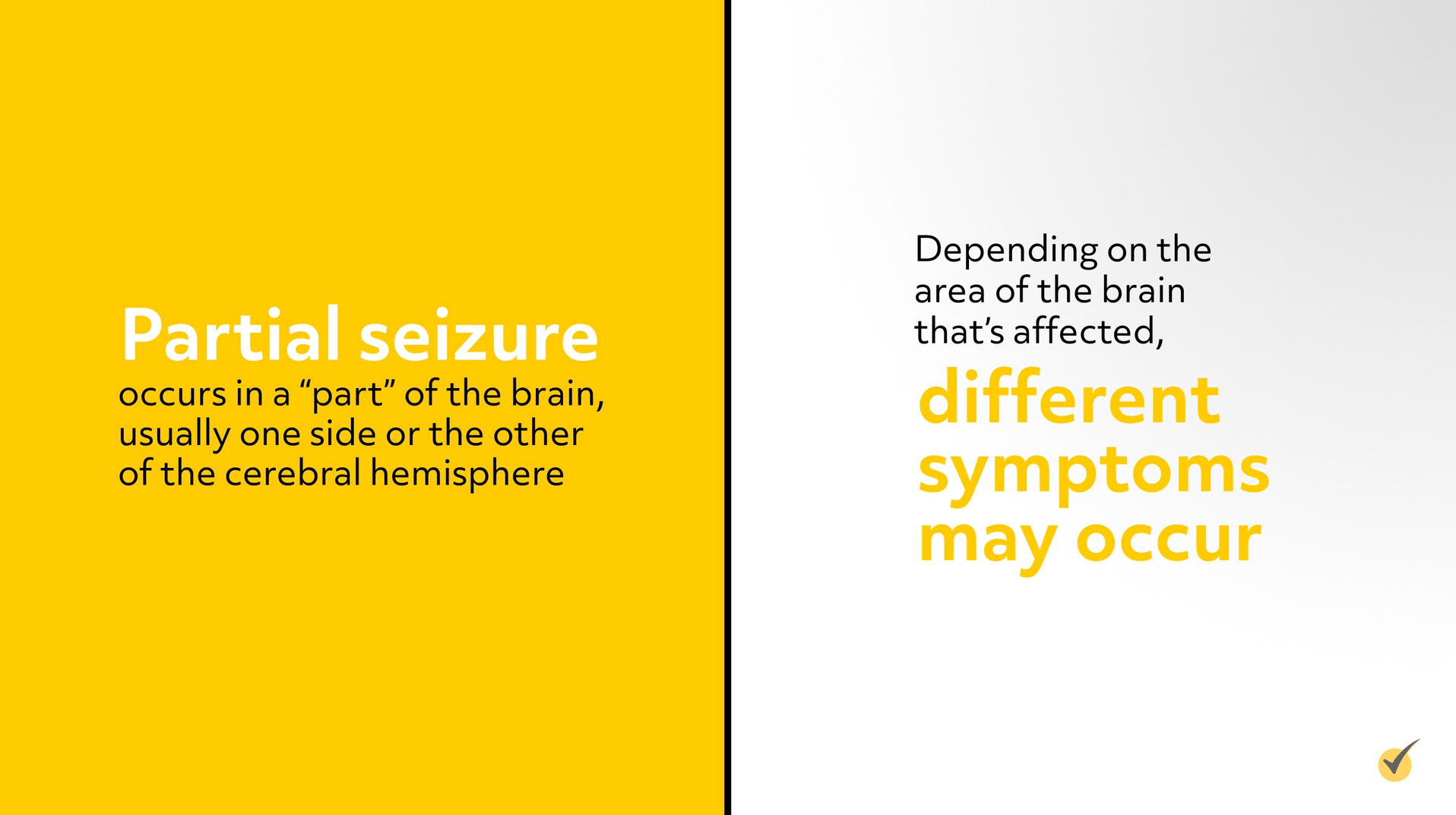 Partial seizures may be preceded by an aura. This can occur an hour or so before a seizure where the person experiences blind spots in their vision, flashing lights, or fortification spectra. Most auras last a few seconds and may lead right into a seizure.

There are a few different types of partial seizures to be aware of. A simple partial seizure, also known as a focal seizure, affects only one area of the brain and does not cause the affected person to lose consciousness. They may have a stare-like gaze, and lose their focus briefly. These types of seizures are very short, lasting a few seconds and are the most common type of seizure in people with epilepsy.

Now let’s get into generalized seizures. These occur in both hemispheres or sides of the brain and cause the person to lose consciousness. There are many different subtypes of seizures that encompass this type of seizure. 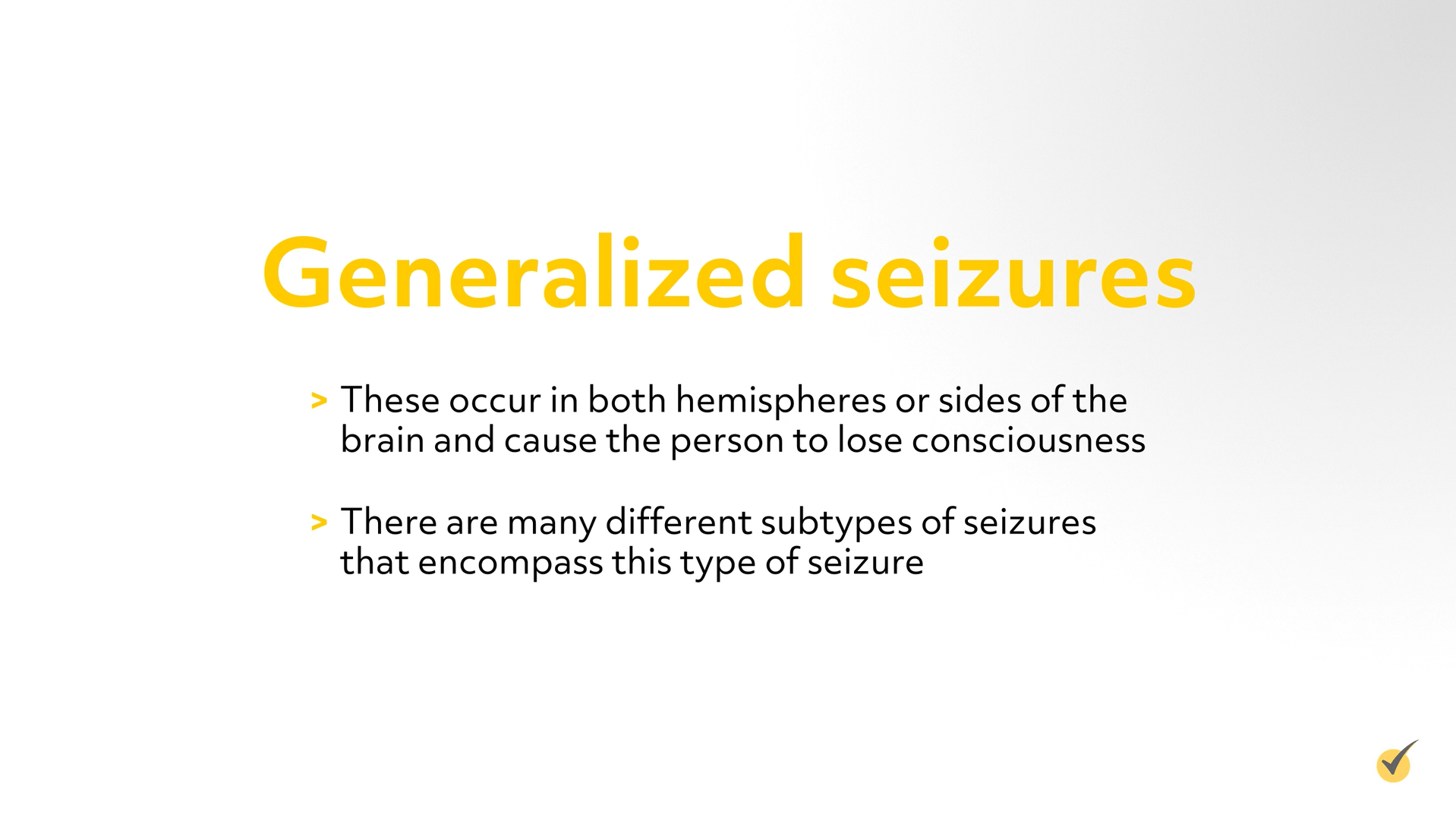 Tonic-clonic seizures, also known as grand mal seizures involve a tonic phase where the body becomes rigid, followed by a clonic phase where the muscular movements are contractive and often violent. During the tonic phase, the person may become cyanotic, meaning they have a bluish discoloration of the face, nail beds, and lips. Some people have only the tonic phase, while others may have only the clonic phase. Afterward, the person may be tired, confused; they may have a headache and need to sleep awhile.

There are a few things that need to be done if someone is having this type of seizure outside of a hospital setting:

Absence seizures, also known as petit mal seizures, are common in children and are the type of seizure where the person appears absent for a while. This lack of absence lasts only a few seconds but can occur frequently in a single day. Absence seizures may also be accompanied by involuntary facial movements or “jerkiness”, lip smacking, and excessive blinking.

Febrile seizures, as the name implies, occur with a fever, usually a high one. These seizures occur in children, typically on the first day of a fever that is caused by an infection. The child may convulse for a few minutes and be unresponsive, but the effects are usually harmless in the long term. The best way to treat febrile seizures is by use of tepid baths and over-the-counter fever-reducing medications.

The last seizure we’ll look at today is status epilepticus (SE), which literally means “a constant state of seizure”. The Epilepsy Foundation defines SE as a seizure lasting thirty minutes or more, and suggests that emergency treatment should begin if the seizure lasts longer than five minutes. It is more common in people who are very young or very old and typically occurs in people who have been diagnosed with epilepsy. Acute symptomatic status epilepticus may be caused by an acute infection, head trauma, hypoxemia, hypoglycemia, or drug withdrawal. 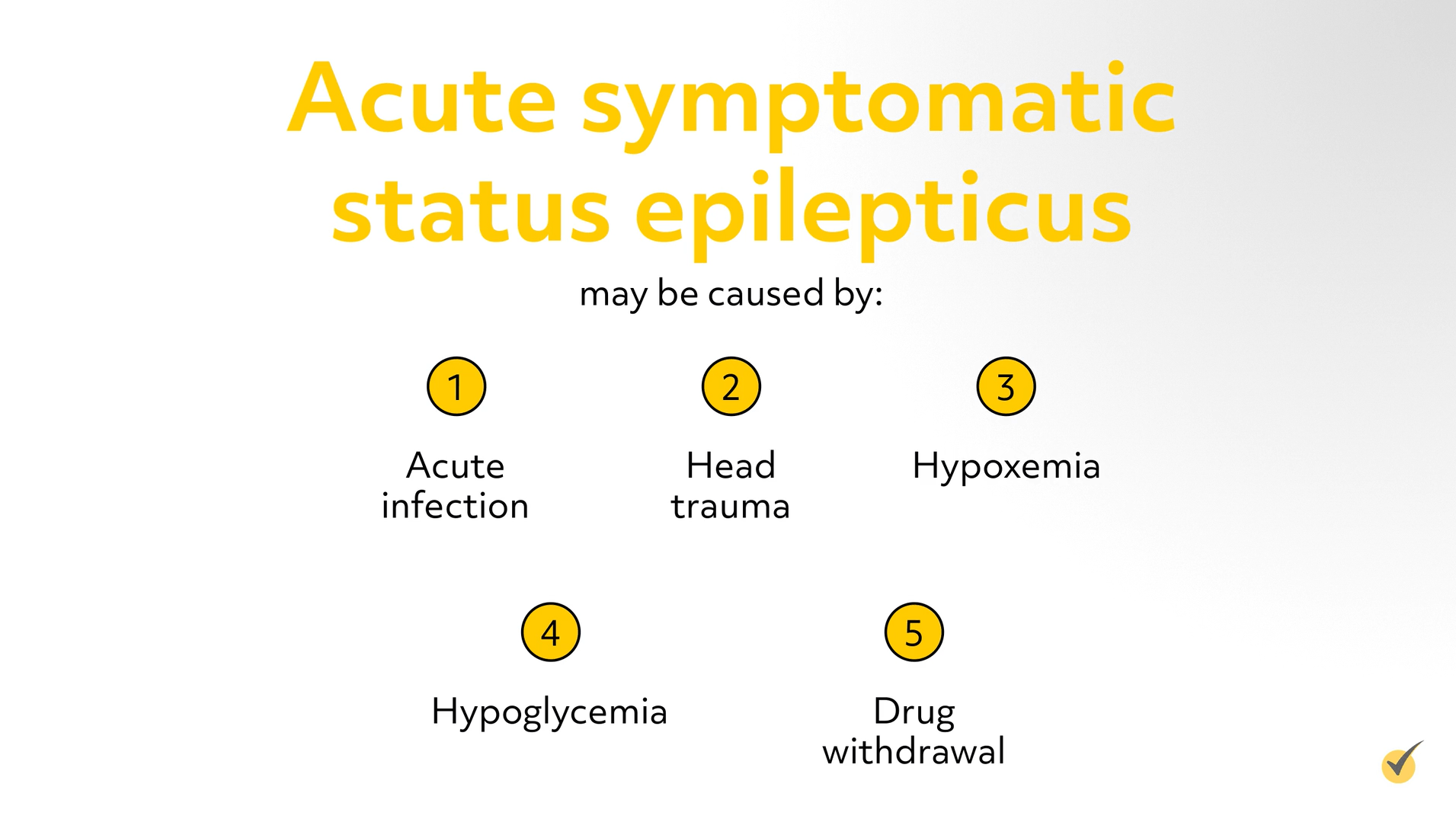 Fever is a very common risk in children, as is stroke in adults. Hospital treatment of convulsive status epilepticus generally includes use of such drugs as diazepam, lorazepam, phenytoin, and phenobarbital, administered in a planned sequence.

A 2013 review of research in the journal Brain indicated that 65–85% of people may experience long-term remission of seizures. Seizures with an identifiable cause, however, are more likely to continue. Other factors affecting the chances of remission include: access to treatment, response to treatment, or other health conditions a person may have. With the correct use of antiseizure medications, the majority of people may be able to control their seizures.

Okay, now that we’ve covered everything, let’s look at a couple of review questions:

1. The best way to prevent febrile seizures in children is to:

The correct answer is C. A tepid bath and some over-the-counter fever-reducing drugs are the best ways to prevent febrile seizures in children.

2. Care of people with seizures includes all of the following except:

I hope this overview was helpful! Thanks for watching, and happy studying!