Respiratory disease refers to several types of disorders that prevent the lungs from functioning properly. There are many different types, some of which are caused by infections and some that are associated with environmental factors.

First let’s take a look at pneumonia. Pneumonia is an infection in one or both lungs, caused by bacteria, viruses, or fungi. Both viral and bacterial pneumonia are spread through airborne droplets and contaminated surfaces or objects. The infection causes the alveoli to fill with fluid or pus, making it hard to breathe in enough oxygen.

Antibiotics can treat most cases of bacterial pneumonia. Most cases of viral pneumonia clear on their own, but an antiviral may sometimes be given. Antifungal medications are given for fungal pneumonia. If symptoms are severe, hospitalization may be required to administer IV antibiotics, oxygen, and respiratory therapy.

Now let’s look at the coronavirus, which is a common type of virus that leads to an upper respiratory infection.

Seven different types of coronavirus have been identified, causing infections that range from mild to severe, depending on the virus type.

A mild to moderate coronavirus infection will be similar to the common cold and people around the world get sick every day from the four types that cause milder infections.

However, the other three types (SARS, MERS, and COVID-19) have the potential to be fatal, and have each led to a significant global outbreak. COVID-19 is a new disease that is a potentially deadly respiratory infection that originated in China in December 2019.

Now let’s look at respiratory syncytial virus (RSV). RSV is a very common cause of infections of the respiratory tract in children and young adults, with most children having been infected with RSV by the age of two. The virus is spread through respiratory droplets in the air by coughing and sneezing, and can be caught by touching the nose or mouth or shaking hands. The virus can live on countertops, doorknobs, and other such objects for up to several hours.

RSV symptoms, which manifest four to six days after exposure to the virus, are similar to the common cold and usually supportive measures are all that’s needed to relieve discomfort until the virus runs its course. One of the first signs of a more serious illness is a barking or wheezing cough, often with short, shallow and rapid breathing. If the infection is severe, a hospital stay may be necessary to give IV fluids, humidified oxygen, and possibly mechanical ventilation.

Bronchiolitisis another common lung infection in children and infants. It’s usually caused by a viral infection and affects the bronchioles with inflammation and congestion. The most common virus that causes bronchiolitis is RSV, but others include influenza viruses and adenoviruses. The viruses are easily spread by respiratory droplets in the air or by touching shared objects and then touching the eyes, nose or mouth. For the first few days symptoms are a runny/stuffy nose, dry, raspy cough, and sometimes a slight fever. After this, there may be a week or more of difficulty breathing or a whistling noise when the child exhales. Many infants will also have an ear infection.

There are several supportive care and medication options available to treat bronchiolitis.

Common medications include analgesics, nonsteroidal anti-inflammatories, and bronchodilators. It should be noted that bronchiolitis can be self-healing, improving over time without medication or supportive care. 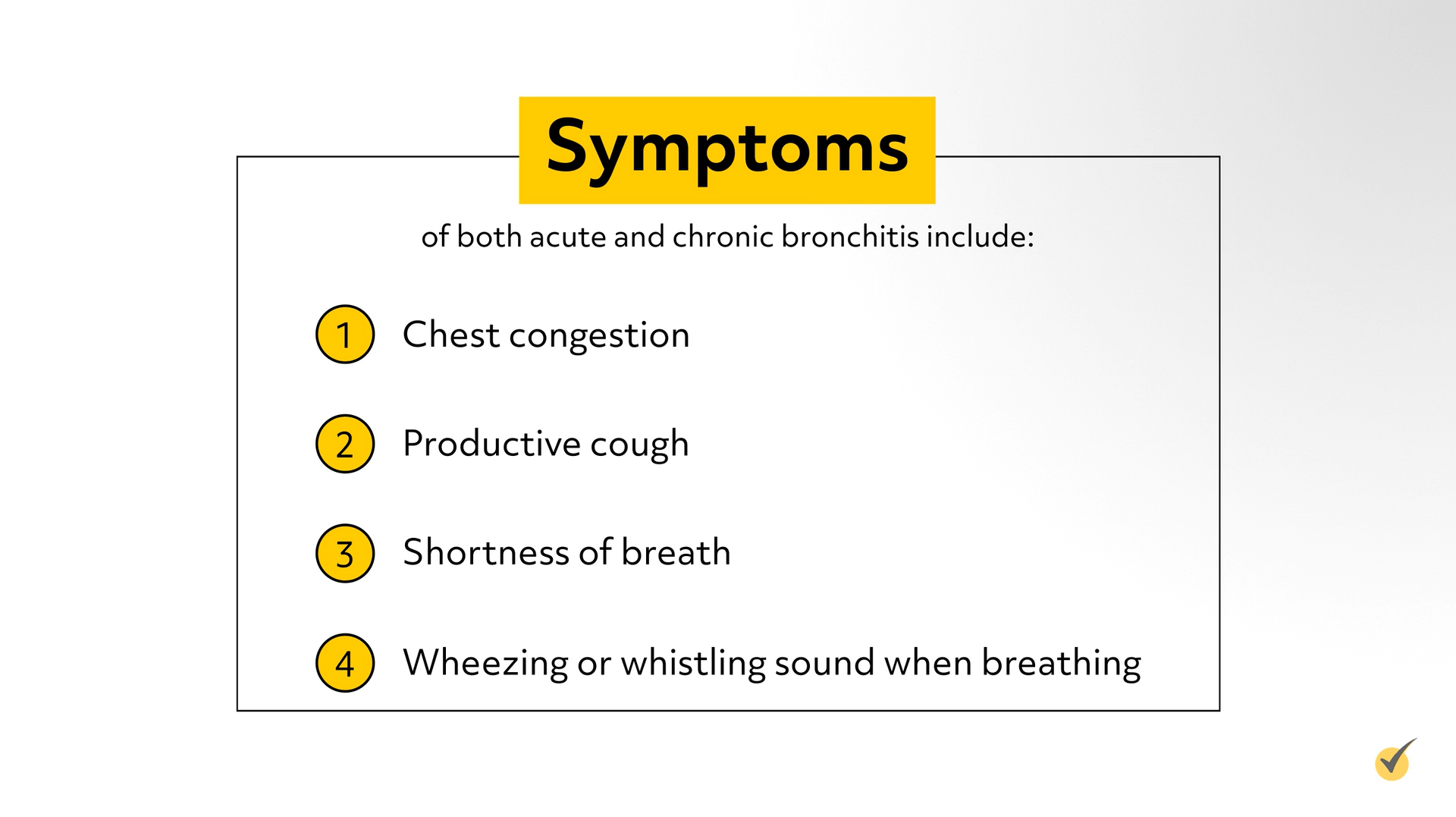 Chronic bronchitis and emphysema are actually part of a group of progressive lung diseases that are referred to as chronic obstructive pulmonary disease, or COPD. 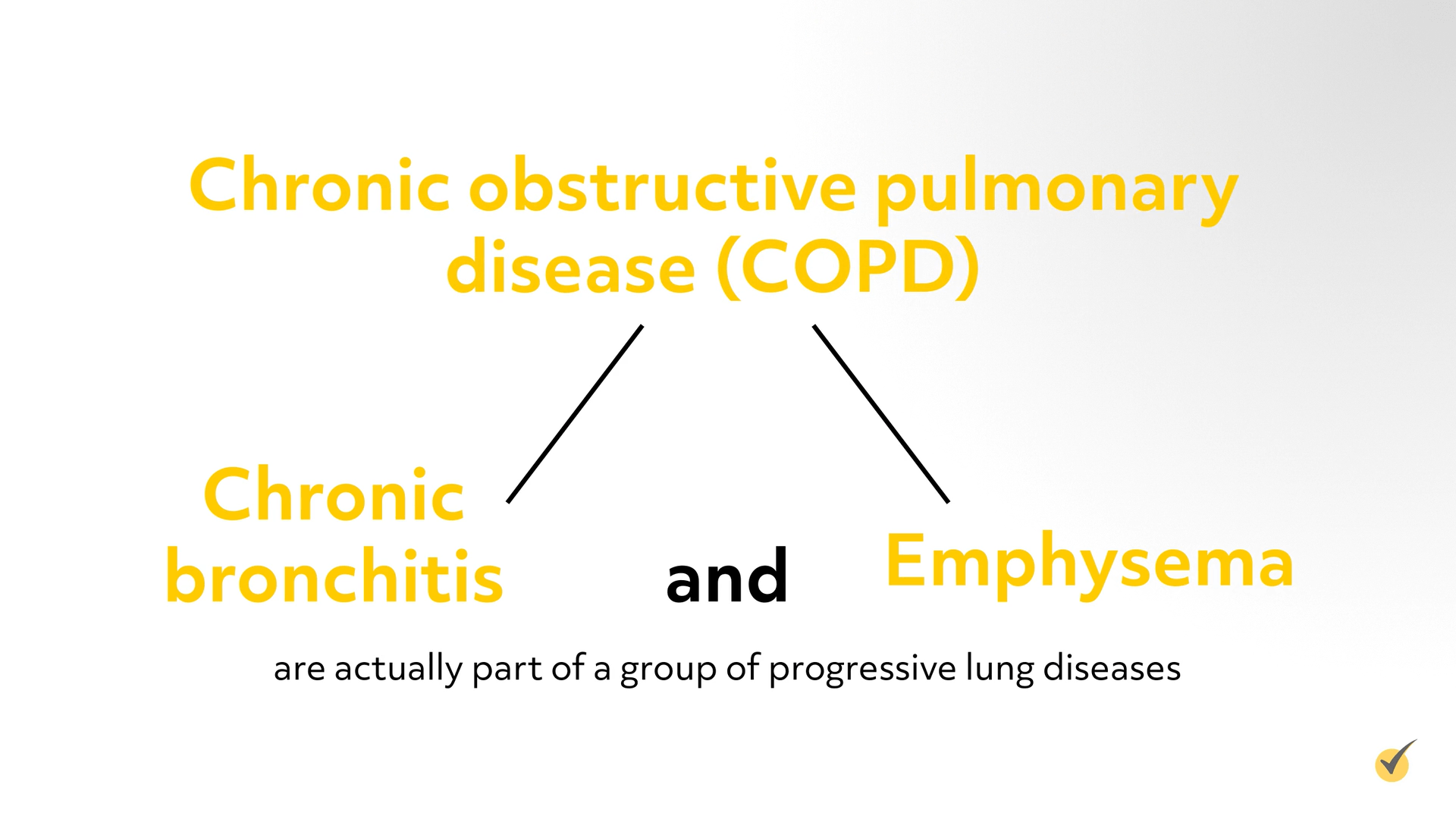 While bronchitis causes inflammation and narrowing of the bronchial tubes, allowing mucus to build up; emphysema slowly destroys the air sacs in the lungs, which interferes with outward air flow. The main cause of COPD is tobacco smoking. Early symptoms of COPD include occasional shortness of breath, mild but recurrent cough, and needing to clear the throat often. 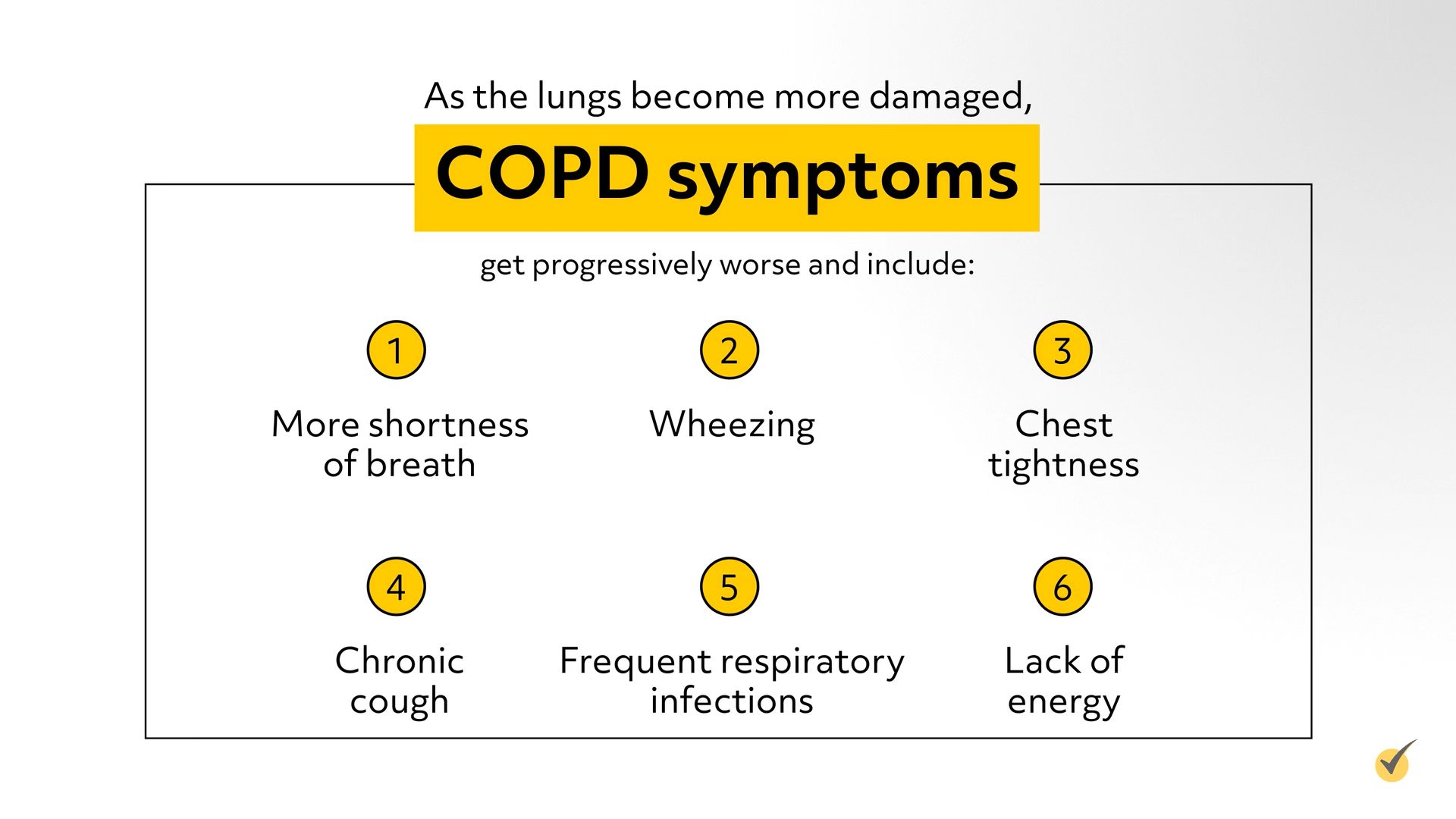 There is no cure for COPD, but treatment can help ease symptoms and lower the chance of complications. Treatment involves medications, such as bronchodilators and glucocorticosteroids; supplemental oxygen therapy, and surgery when other treatments have failed.

Another lung disease that affects the bronchi is asthma. Asthma is a long term disease of the lungs, in which the airways are persistently inflamed and narrowed, and may occasionally spasm, causing wheezing and shortness of breath. Asthma attacks can be triggered by several things, including allergies, exercise, and smoke. The bronchial tubes become inflamed with increased production of mucus.

Treatment for asthma involves prevention and long-term control to stop asthma attacks before they start. Long-term asthma control medications are generally taken daily and may include inhaled corticosteroids, oral leukotriene modifiers, inhaled long-acting beta agonists, combination inhalers, and oral theophylline. Quick-relief medications are used for rapid relief during an asthma attack and include inhaled short-acting beta agonists, inhaled bronchodilators, and oral or IV corticosteroids. A nebulizer is often used for combination quick-relief medicines. Allergy medications may also help if the asthma is triggered by allergies.

Cystic fibrosis (CF) is a progressive, genetic disease that affects the lungs and digestive system. The body produces thick and sticky mucus that causes persistent lung infections and limits the ability to breathe over time. The most common symptoms of CF are persistent coughing, shortness of breath, wheezing, nasal polyps, salty-tasting skin, poor weight gain, and greasy, bulky stools. 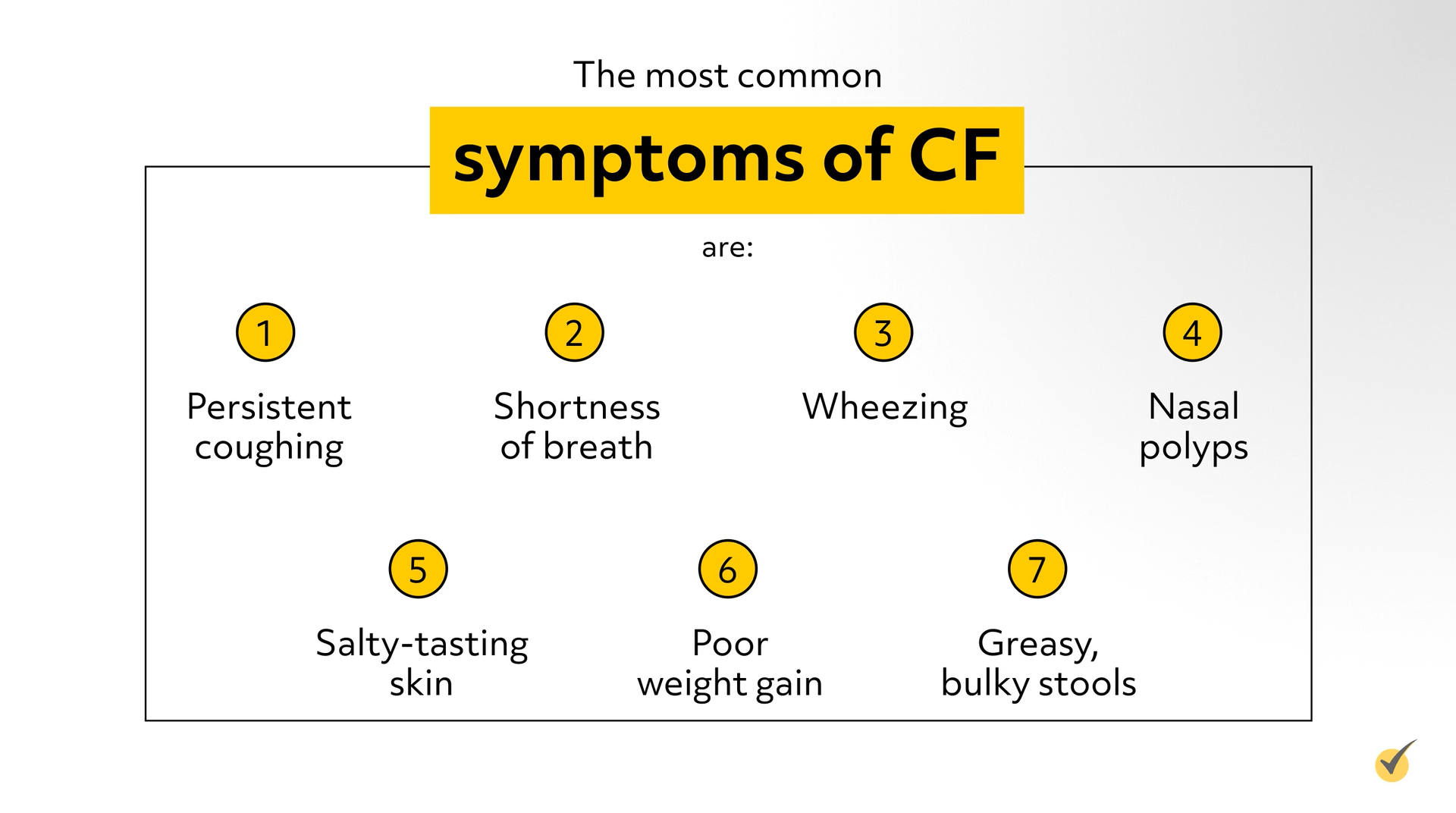 The obstruction of the lungs increases the risk of lung infections such as bronchitis and pneumonia. There is currently no cure for CF, but treatment can manage the symptoms and improve quality of life. Treatment includes airway clearance techniques to loosen and rid mucus from lungs, along with inhaled medication to thin mucus, kill bacteria, and improve airway clearance.

Acute Respiratory Distress Syndrome (ARDS) typically occurs in people who are already hospitalized and critically ill, manifesting as fluid builds up in the alveoli in the lungs. The fluid keeps the lungs from filling with enough air, which means less oxygen reaches the bloodstream. This deprives organs of the oxygen they need to function. The most common cause of ARDS is sepsis or a widespread infection in the bloodstream.

The signs and symptoms of ARDS can vary in intensity, depending on its cause and severity, as well as the presence of underlying heart or lung disease. They include severe shortness of breath, labored and unusually rapid breathing, low blood pressure, and confusion and extreme tiredness.

Treatment for ARDS is mainly supportive. While rare, patients who develop ARDS may not survive.

Advanced lung cancer will present with symptoms including

Treatment varies but may include surgery, radiation, chemotherapy, targeted drug therapy, and immunotherapy.

Pneumonia, RSV, and bronchiolitis are all spread from person to person via:
(select all that apply)

If you answered B and D, you are correct!