Whether it’s a simple tale like The Three Little Pigs or a long-winded play like the tragedy of Hamlet, a well-told story will always have a defined plot.

A plot is the sequence of main events in a story. These events generally take place in a specific order, which gives the story a specific structure. This structure can be divided into five basic elements: Exposition, rising action, climax, falling action and the resolution. Let’s take a look at each of these. 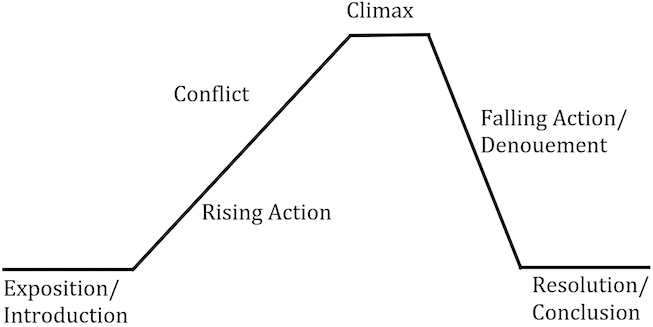 The exposition, or beginning, of a plot sets the scene. It is the part of a story where the writer builds the world, sets the time frame, and introduces characters to help the reader understand when and where things are taking place.

The rising action of a plot is where the story begins to develop. Conflicts are introduced that complicate the lives of the characters and create suspense. These tensions can be a cause of excitement or crisis as the characters deal with the conflict put in front of them.

The climax of a plot is when the tensions or actions have reached their peak and characters have reached a turning point in the story. From this point on, the reader is left to wonder what will happen next and if the tensions will be resolved.

The falling action of a plot occurs once the conflict from the onset of the story begins to resolve itself.

Finally, the resolution of a plot is the last element to take place. The resolution is the conclusion of the story, which can be happy, tragic, or open for interpretation. Regardless, a well-written conclusion will make it clear that the story has come to an end.

These are elements that storytellers have used for centuries. Back in 335 B.C., Greek philosopher Aristotle wrote a book called Poetics, which talked about his theories about drama and storytelling. According to Aristotle, plots played a major role in the structure of poetry and tragedies during his time. In fact, to him, the plot, or mythos, was the most important element in a tragedy. He claims a plot should move from beginning, to middle, then to the end in an organized sequence where the beginning doesn’t pick up from any previous event and the end ties up all loose threads within the story. Aristotle also believed there were two types of plots: simple and complex. Simple plots are a unified construct of probable actions with a change in fortune. This can be seen clearly in most cliché horror movie plots:

There is a chain of cause and effect events in this simple plot that move the story forward; however, a complex plot will have what’s known as a reversal of fortune or a recognition in the story. A reversal of fortune is a pivotal point of the story where the protagonist experiences a change from being secure to being vulnerable. Recognition is a moment of insight where the protagonist understands their place in the larger story.

An example of this can be seen in the character Macbeth from the play of the same name by William Shakespeare. Macbeth went from a content and quiet aristocrat to an overly ambitious and tyrannical King. This tyranny arose from the belief that, according to a prophecy, no one born of a woman could defeat him. This was a reversal in the plot. Because he took the prophecy literally, he felt invincible – that is, until Macduff, who Shakespeare describes as being born via C-section, appears here. It’s here Macbeth realizes the prophecy did not make him invincible, and he is defeated by Macduff. This is an example of recognition for both Macbeth and Macduff who realize their places within the story as the conflict between them is resolved.

Okay, now that we’ve learned what plots are, let’s look at a quick review question to test your memory.