Hey, guys! Welcome to this Mometrix video over the nervous system.

The nervous system includes anything within the body that would allow you to sense; so, the brain, spine and spinal cord, all nerves, and any other sensory neurons.

The nervous system has four main roles or functions:

First, to collect and receive information internally and externally; so, from within the body and outside of the body.

Second, to process or derive meaning from the information collected and received.

Third, after the information has been processed, the nervous system forwards that information to the appropriate party; so, to the muscles, organs, or glands. This information sets them up to react how they need to. 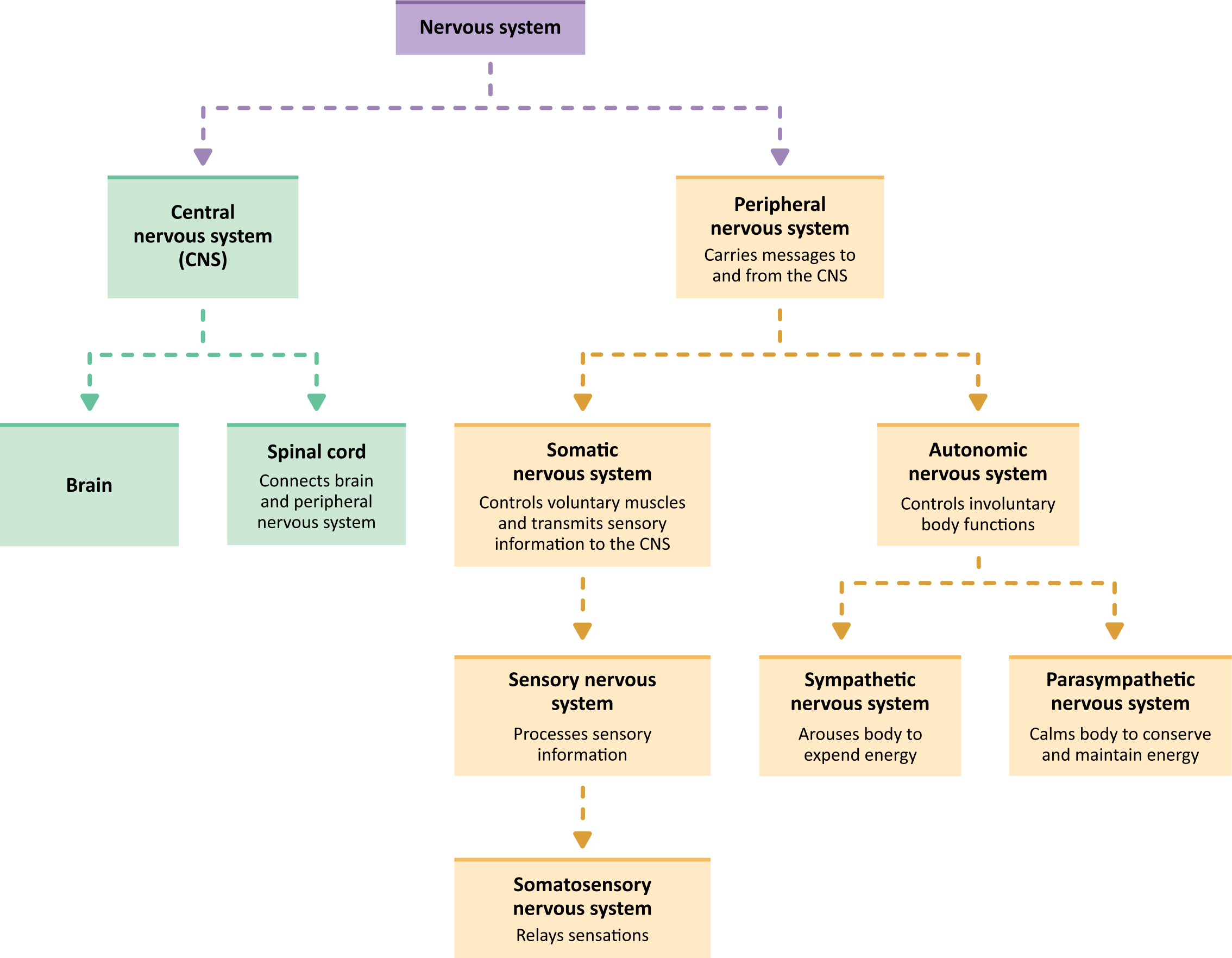 First, we will take a look at the central nervous system, and what exactly that includes.

The central nervous system is composed of the brain and the spinal cord. These two components encompass several other components. So, we will take a closer look at the brain first.

Regions of the Brain

The cerebellum sits right behind the upper portion of the brain stem (which is where the brain and spinal cord connect) and consists of two half-spheres (or hemispheres). 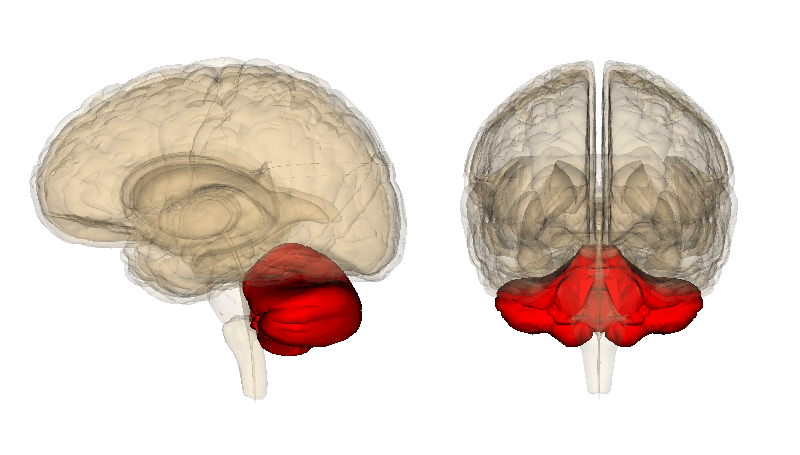 The cerebrum sits in the top portion of the cranial cavity. The cerebrum is separated into a left and right hemisphere by a trench-like line called the longitudinal fissure. Now, perhaps counterintuitively, the left half of the cerebrum manages the right side of the body and the right half manages the left side of the body. However, even though there is a groove that distinctly separates the two halves of the cerebrum, there is a bundle of neural fibers, called the corpus callosum, that connects the two halves, and allows them to work together.

The cerebrum is made up of four different lobes: the frontal lobe, the temporal lobe, the parietal lobe, and the occipital lobe.

The frontal lobe, like its name suggests, is at the front-most region of the brain, and, out of the four lobes, is the biggest.

The frontal lobe is split from the parietal and temporal lobe by fissures. The fissure that separates it from the parietal lobe is called the central sulcus, and the fissure that separates it from the temporal lobe, which is even deeper, is called the lateral sulcus. The frontal lobe contains the primary motor cortex. The primary central cortex (M1) is one of the main components of the brain included in the body’s motor function. The primary motor cortex initiates electrical signals and impulses that initiate body movement. The frontal lobe is also essential for problem solving, speech, and articulation, and it’s accountable for personality traits.

You actually have two temporal lobes, one for both hemispheres. Your temporal lobes are located near your ears, and they mainly function in auditory processing. The temporal lobe taps into other roles as well, such as visual memory, your ability to learn language, and emotion association. 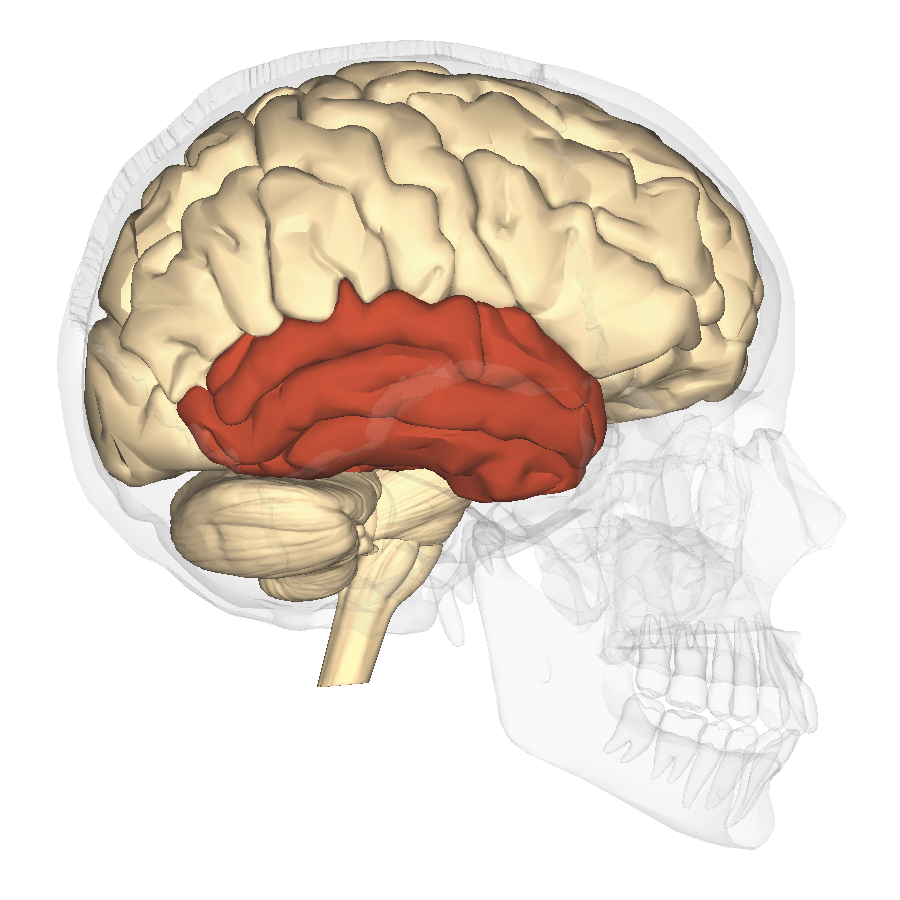 The parietal lobe is set between the occipital lobe and the frontal lobe.

The parietal lobe has a really big job of having to process the information that it receives within milliseconds. The somatosensory cortex is located inside of the parietal lobe, and is crucial for processing the information from touch. The somatosensory cortex allows us to pinpoint the exact locality of touch perception, and helps to distinguish pain levels and temperature.

The parietal lobe is important for our depth of perception and communicates with other parts of the brain in order to perform other tasks.

The occipital lobe sits in the back part of the cortex. 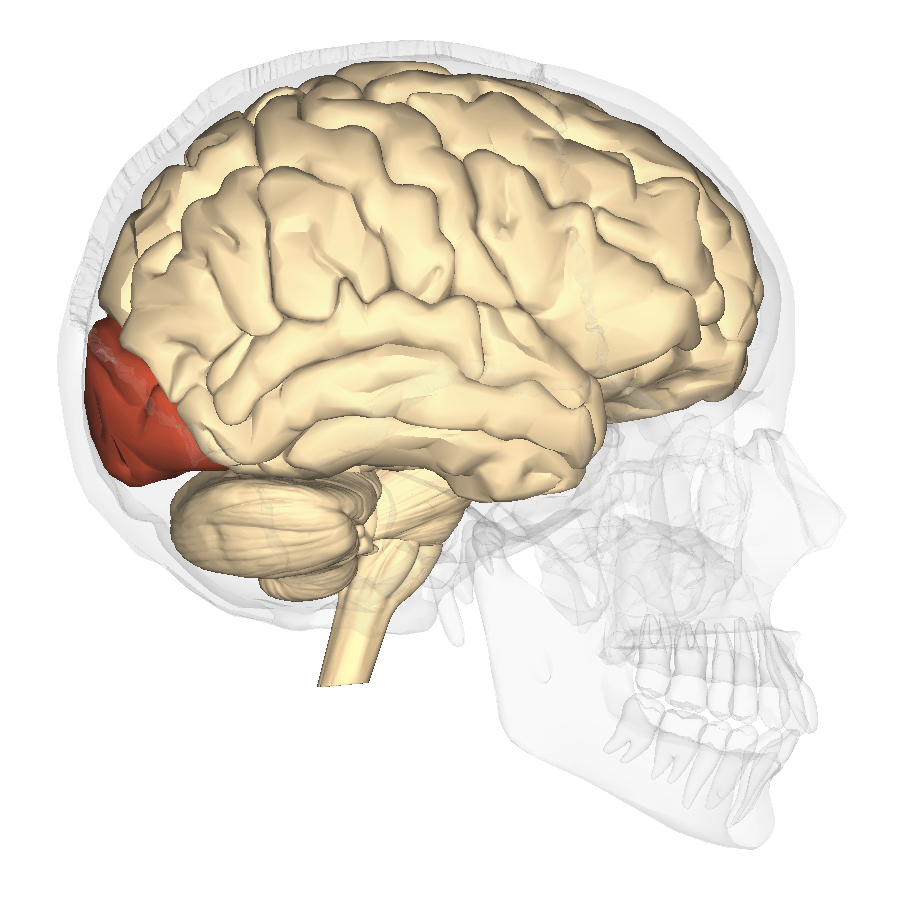 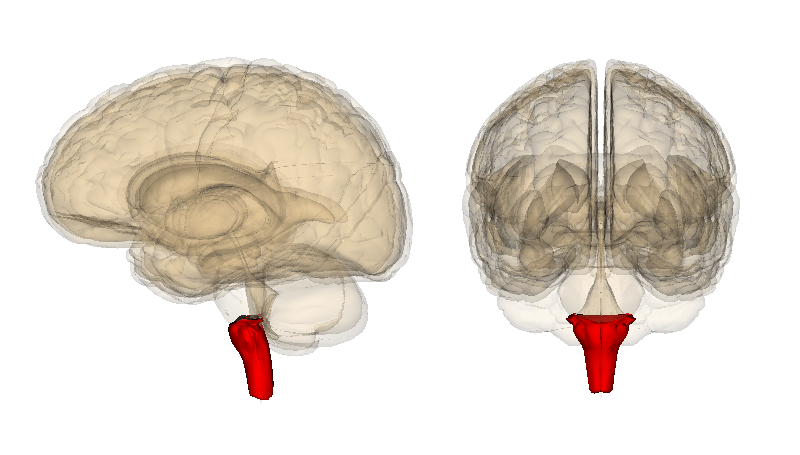 The medulla has immediate control over numerous autonomic nervous system responses, it aids in the control of particular regions of the body, and it also plays a role in motor functions and outward motion. The medulla is very important, just like every other part of our brain. The medulla helps control breathing, and it controls our heart rate.

The medulla functions involuntarily. The medulla responds to various heart functions by dilating the blood flow so that there is a higher or lower amount of oxygen circulation, it can help by responding in fight or flight situations by switching digestion off or on, causes us to cough or sneeze to get rid of unwanted particles that get into your nasal cavity, and also controls vomiting or swallowing in order to dispel anything that may bring harm to you.

The fourth region of the brain that we will look at is the brain stem. The brain stem has three different parts: the medulla (which we just looked at), pons, and midbrain.

The pons sort of functions as a message headquarters for many other parts of the brain.

It aids in communication between brain sections, like the cerebrum and cerebellum. The pons is right above the medulla, and beneath the midbrain. So, it sits right in the middle. Many essential nerves stem from the pons. The vestibulocochlear nerve permits sound to proceed from our ears into our brain. The abducens nerve permits the eyes to move and look horizontally. The trigeminal nerve allows for us to experience feeling in the face, and the facial nerve allows for us to actually make facial expressions. The pons helps in the duties of the medulla, and it is linked to managing our sleep cycles. 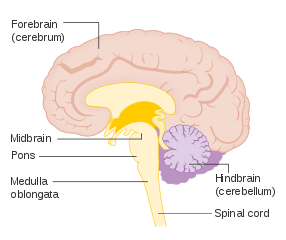 Now, the midbrain is called the midbrain, because it sits between the forebrain and the hindbrain; but it’s important to note that out of the three parts of the brain stem it is not located in the middle. The midbrain functions, like the medulla, as this super message headquarters between the forebrain (or cerebral cortex) and the hindbrain (or the cerebellum and brainstem). The midbrain allows you to incorporate sensory data coming from your eyes and ears with data coming from your body’s muscle movements; helping it to adjust your movements based on important information.

All three parts of the brainstem function involuntarily.

The thalamus is the fifth region of the brain. The thalamus sits right above the brainstem sandwiched between the midbrain and cerebral cortex. 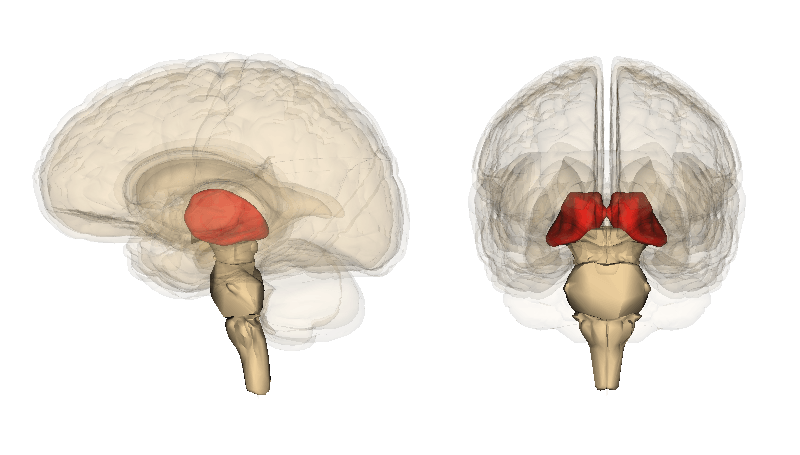 The primary job of the thalamus is to inform the cerebral cortex of any sensory or motor stimuli. The thalamus also helps to control sleep, and aids in keeping us awake and alert. The thalamus, along with the hypothalamus, epithalamus, and subthalamus, is a part of the diencephalon, also sometimes called the interbrain. The diencephalon is the area where the vertebrate neural tube is located, which helps bring about the formation of the forebrain.

The sixth, and last, region of the brain is the hypothalamus. The hypothalamus is positioned below the thalamus and is the bottom part of the diencephalon. 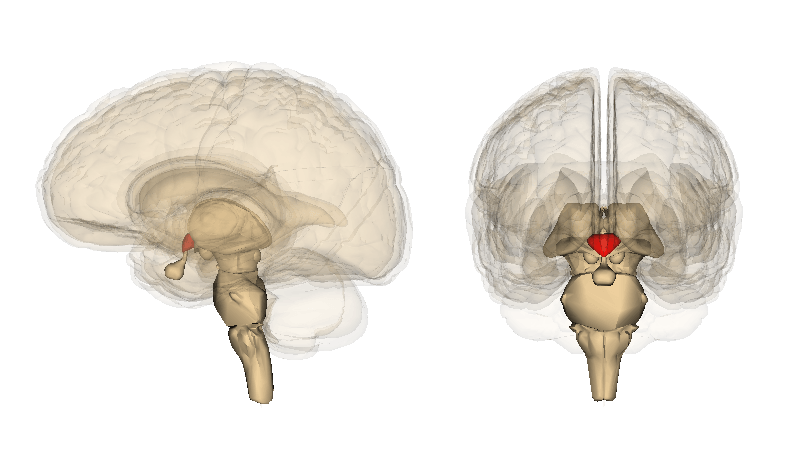 The peripheral nervous system is made up of nerves and what is called the ganglia.

Nerves are bundles of nerve fibers, also known as axons.

There are two types of nerves in the peripheral nervous system: spinal nerves and cranial nerves. There are 31 pairs of spinal nerves, and 12 pairs of cranial nerves. Ganglia refers to a cluster of neuron somas (or cell bodies). The individual cell body attaches to dendrites. The dendrites send information to neurons. The axons or nerve fibers then communicate that information to other neurons. It’s all a connected web. These nerves and ganglia are located around and outside of the brain and spinal cord.

The sympathetic nervous system is the system that gets our body ready for the reaction that has been familiarized as the “fight or flight” response. When our body is being threatened or at risk for potential injury, this is the system that controls our response. The sympathetic nervous system causes our bodies to become keenly alert, speeds our heart rate, causes muscle contraction, and shuts off any function that is not essential for survival.

The overall functioning of the sympathetic nervous system is largely due to the neurotransmitter acetylcholine. This neurotransmitter binds to nicotinic receptors to trigger the release of norepinephrine which is produced by the adrenal gland to prepare our body and brain for action. Nicotinic receptors are the main receptors in the muscles for motor-neuron-to-muscle correspondence, that manage the contraction of muscles. The sympathetic nervous system originates in the thoracic and lumbar regions of the spinal cord.

It’s important to note that both the central and peripheral nervous systems enlist the acetylcholine receptors, both nicotinic and muscarinic.

We just covered a lot of information. But, here is a very, very generalized diagram of the nervous system to help you remember the main parts.

If all of these systems seem pretty interconnected, the answer is yes.

I hope that this overview of the nervous system has been helpful to you!

What is the function of the nervous system?

The main function of the nervous system is to coordinate the activities of the body by sensing, interpreting, and issuing commands as a response to conditions in the body’s environment.

How does the nervous system work?

Messages are sent across the plasma membrane of neurons through a process called action potential. These messages occur when a neuron is stimulated past a necessary threshold. These stimulations occur in a sequence from the stimulation point of one neuron to its contact with another neuron. At the point of contact, chemical synapse, a substance is released that stimulates or inhibits the action of the adjoining cell. A network of nerves composed of neurons fans out across the body and forms the framework for the nervous system. The direction the information flows depends on the specific organizations of nerve circuits and pathways.

What organs are in the nervous system?

The brain and spinal cord make up your central nervous system.

How does the nervous system maintain homeostasis?

Homeostasis is the regulation of internal chemistry to maintain a constant internal environment. This state is controlled through various feedback mechanisms that consist of receptors, an integrator, and effectors. Receptors such as mechanoreceptors or thermoreceptors in the skin detect the stimuli. The integrator such as the brain or spinal cord receives the information concerning the stimuli and sends out signals to other parts of the body. The effectors such as muscles or glands respond to the stimulus. Basically, the receptors receive the stimuli and notify the integrator, which signals the effectors to respond.

What effect does exercise have on the nervous system?