Welcome to this video review on myasthenia gravis!

Myasthenia gravis (or MG) literally means “grave, or serious, muscle weakness.” MG is a chronic disease that results from an autoimmune response that destroys acetylcholine (ACh) receptors at the neuromuscular junction.

The onset of myasthenia gravis (MG) is usually gradual and the course of the disease highly variable. It can occur at any age, but usually affects women at 20 to 30, and men at 60 to 70 years of age.
Signs and symptoms of MG involve weakness and fatigue of selected voluntary muscles. The distinctive characteristic is muscle weakness that worsens after periods of activity and improves after periods of rest. 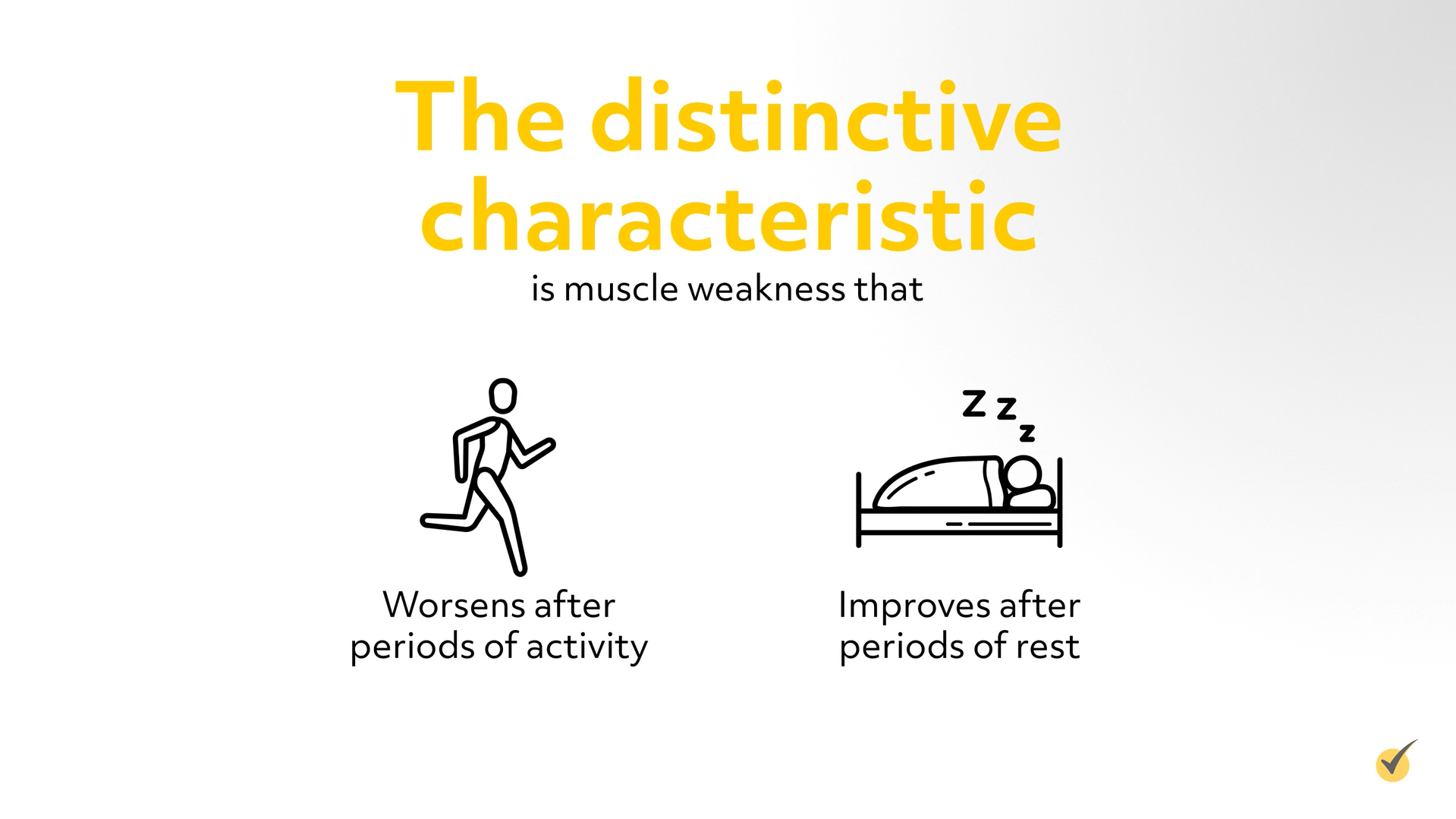 Muscles that may be involved include the eye, causing diplopia (or double vision) and ptosis (drooping eyelid), the mouth, causing slurred speech or difficulty chewing and swallowing, weakness in arms and legs, chronic muscle fatigue, and difficulty breathing.

Early on in the disease, symptoms are relieved easily with rest, but, as the disease progresses, fatigue becomes evident with less and less exertion. There are several ways myasthenia gravis can be diagnosed.

Although MG has no known cure, it can generally be controlled with therapies to reduce and improve muscle weakness. Indirect-acting cholinergics, also called anticholinesterase agents, improve neuromuscular transmission and increase muscle strength. Examples include Neostigmine (Prostigmin) and Pyridostigmine.

Immunosuppressive drugs, such as prednisone, azathioprine, cyclosporin, and tacrolimus, can be given to improve muscle strength by suppressing the production of abnormal antibodies. However, they may cause major side effects and must be carefully monitored. For severe cases of MG, plasmapheresis therapy or IV immunoglobulin is an option. When a patient has antibodies in their plasma that attack the neuromuscular junction, plasmapheresis removes the destructive antibodies in plasma and replaces them with fresh frozen plasma.

IV immunoglobulin binds to the antibodies that cause MG and removes them from circulation. Improvements are usually dramatic, but temporary.

A thymectomy is the surgical removal of the thymus gland and results in symptom remission in about 40% of patients, possibly due to the rebalancing of the immune system.

Patients with MG are susceptible to two crisis situations that are both characterized by respiratory difficulty or failure. A myasthenic crisis is an acute exacerbation of the disease process and may occur in a response to stress, trauma, or infection. The muscles that control breathing and swallowing can weaken to the point of life-threatening levels and assisted ventilation is usually required. When this happens, additional anticholinesterase medications are given.

A cholinergic crisis occurs when cholinergic drugs have reached a toxic level and cause over-stimulation of the PSNS. Anticholinesterase drugs are stopped and atropine (an anticholinergic drug) is given. The patient has profound weakness, copious respiratory secretions, and respiratory failure, which may require intubation and ventilation. 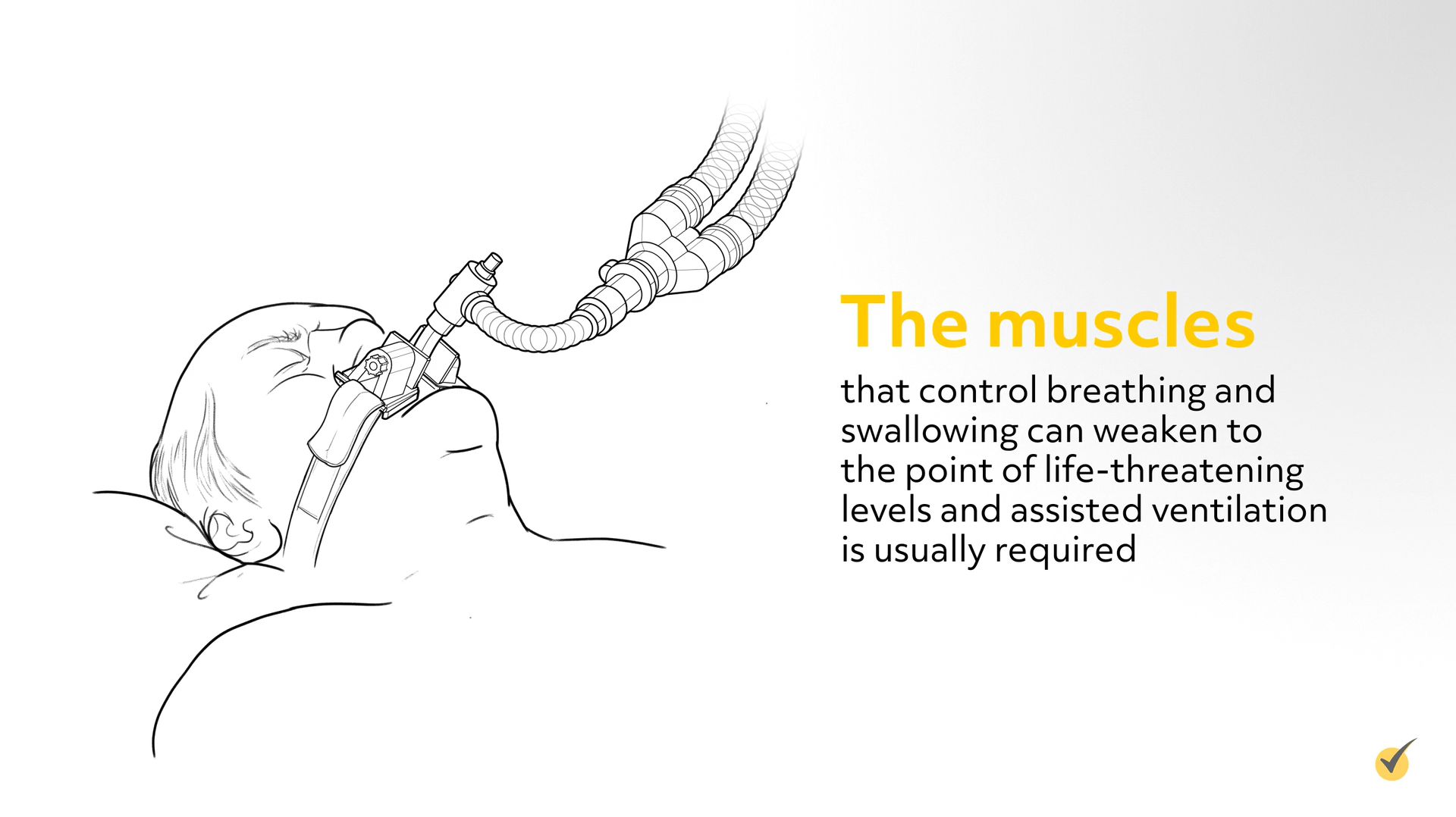 So how do we determine if it is a myasthenic or cholinergic crisis?

Educating the patient and family about self-care is foundational in the management of myasthenia gravis.

A neurologist is conducting a Tensilon test using Edrophonium on a patient who is experiencing unexplained muscle weakness, diplopia, and slurred speech. Which of the following findings would indicate that the patient has myasthenia gravis?

If you chose 3, you’re correct! During the Tensilon test, Edrophonium, a short-acting anticholinesterase is administered, which allows more of the neurotransmitter acetylcholine to be present at the neuromuscular junction. Therefore, muscle strength is IMPROVED, IF myasthenia gravis is present.

Which MG patient is most at risk for developing a cholinergic crisis?

If you chose 2, you’re correct! Remember, a cholinergic crisis occurs when cholinergic drugs (such as the anticholinesterase, Pyridostigmine) have reached a toxic level and cause over-stimulation of the PSNS. On the other hand, a myasthenic crisis is an acute exacerbation of the disease process and may occur in a response to trauma, stress or infection. Both conditions lead to muscle weakness and respiratory failure, therefore a Tensilon test is used to help differentiate between the two conditions.

That’s all for now – thanks for watching!