Hi, and welcome to this video about multiple organ dysfunction syndrome! We’re going to look at an overview of the disease, the signs and symptoms, diagnosis, and management. Let’s get started!

Multiple organ dysfunction syndrome (MODS) refers to an acutely ill patient that has progressive organ dysfunction, in which homeostasis cannot be maintained without intervention. It is a process rather than a single event, and it is at the severe end of illness severity of both infectious and noninfectious conditions.

It can be classified as primary or secondary:

Our focus today will be on secondary MODS, caused by sepsis. Sepsis is a clinical syndrome in which a severe infection becomes complicated and is characterized by systemic inflammation and widespread tissue injury. The clinical process usually begins with infection, which can lead to sepsis and then organ dysfunction.

Symptoms of sepsis are typically nonspecific and include fever and chills, along with more specific symptoms of malaise, fatigue, confusion, or anxiety. Since there is a continuum of severity from sepsis to septic shock to MODS, the specific symptoms exhibited depend on where the patient falls on the continuum. Look for signs of a localized infection. Assessment of the patient’s overall condition usually reveals an acutely ill, toxic appearance in patients with serious infections. Tachypnea is common, as well as tachycardia with an increased pulse pressure. In the early stages of sepsis, cardiac output is well maintained or even increased, but as sepsis progresses, stroke volume and cardiac output fall. Patients begin to have poor distal perfusion, including cool extremities, cool skin, and delayed capillary refill.

A scoring system is utilized to assess the severity of organ dysfunction in patients who are critically ill from sepsis. SOFA (Sequential Organ Failure Assessment) uses simple measurements of major organ function to calculate a severity score, with the highest score most predictive of mortality. 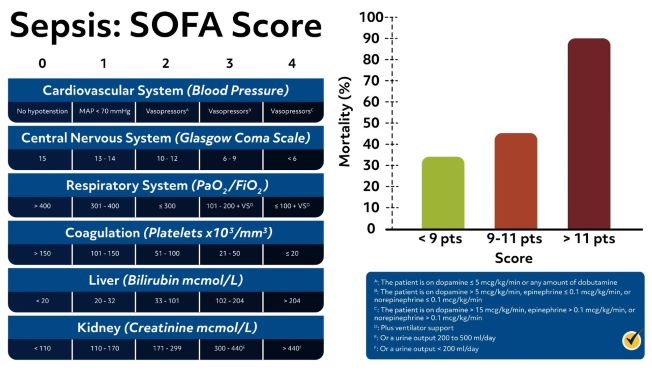 The SOFA severity score is based on the following organ function measurements:

The SOFA score is used as a tool to facilitate the identification of patients at risk of dying from sepsis.

Diagnosis of MODS involves laboratory tests to identify sepsis in order to assess the general hematologic and metabolic condition of the patient.

There are two forms of multiple organ dysfunction syndrome. In both, the development of acute lung injury (ALI) or ARDS is the earliest manifestation.

In the more common form of MODS, the lungs are the predominant, and often the only organ system affected until very late in the disease. Patients often present with a primary pulmonary disorder, such as pneumonia, contusion, aspiration, near drowning, hemorrhage, exacerbation of COPD, or pulmonary embolism. When the lung disease progresses, encephalopathy or mild coagulopathy may occur, persisting for 2-3 weeks. At this point, the patient either begins to recover or progresses to a sudden dysfunction in another organ system. Once another major organ dysfunction occurs, these patients frequently do not survive.

The second form of MODS presents with the causative source in organs other than the lungs – most commonly intra-abdominal sepsis, pancreatitis, extensive blood loss, or vascular catastrophes. ARDS still develops early and dysfunction in other organ systems also develops much sooner than in the first form of MODS. For several weeks, patients remain in a pattern of compensated dysfunction, at which time they either recover or deteriorate further and die.

When we look at treatment for multiple organ dysfunction syndrome, it is not so much a syndrome to be treated, but a complication to be prevented. Treatment begins with treating septic shock before it turns into MODS. The goals of treatment include:

The road to recovery is often long and challenging for patients who survive sepsis and MODS. Patients may have physical, emotional, and cognitive consequences after discharge from the hospital. These patients also have a higher risk of repeat sepsis episodes. Aggressive rehabilitation programs, including psychological treatments, may be helpful.

Now that we’ve learned all about MODS, let’s go over a few questions for review.

1. Organ failure that occurs as a result of the patient’s response to sepsis refers to

If you chose C, secondary MODS, you are correct!

2. The scoring system used to assess the severity of organ dysfunction in patients who are critically ill from sepsis is called the

If you chose B, Sequential Organ Failure Assessment, you are correct!

That’s all for now! Thanks for watching and happy studying!