What Does the Judicial Branch Do?

Hello there! In this video we’ll be learning about one of the three branches of American government: the judicial branch. We’ve got videos on the other two branches so be sure to check those out as well!

Briefly, I want to take you back to a founding document of our country, the US Constitution. This document established the government and is crucial for understanding how things were originally designed to work. The US government was created with checks and balances built-in. This prevents any one person or group of persons from exercising undue influence or control over the government and country. We have three main branches: the legislative (the House of Representatives and the Senate), the executive (the President), and the judicial (which is the Supreme Court). According to the Constitution, the legislative branch (known as Congress when referring to both houses) is responsible for writing the laws, the executive is responsible for enforcing them, and the judicial branch is responsible for helping interpret the laws and how they should be enforced.

Article III of the Constitution established the judicial branch with these words: “The judicial Power of the United States, shall be vested in one supreme Court, and in such inferior Courts as the Congress may from time to time ordain and establish.”

The scope and duty of the court system is described later: “The judicial Power shall extend to all Cases, in Law and Equity, arising under this Constitution, the Laws of the United States, and Treaties made, or which shall be made, under their Authority;—…to Controversies between two or more States;—between a State and Citizens of another State; —between Citizens of different States, —between Citizens of the same State claiming Lands under Grants of different States, and between a State, or the Citizens thereof, and foreign States, Citizens or Subjects.”

Okay, that was many mouthfuls. Notice that the scope is federal – states have their own laws and court systems. We’ll get to that more later, but for now it’s enough to remember that the Supreme Court deals with federal issues.

Currently, the Supreme Court is comprised of 9 judges who are appointed for life by the executive branch and must be confirmed by the Senate. There is one Chief Justice and 8 Associate Justices. The Supreme Court is located in Washington DC, and you are able to visit the building and allowed to sit in on proceedings. This is done in an effort to build trust in the institution, as we’re more likely to trust something we can observe. 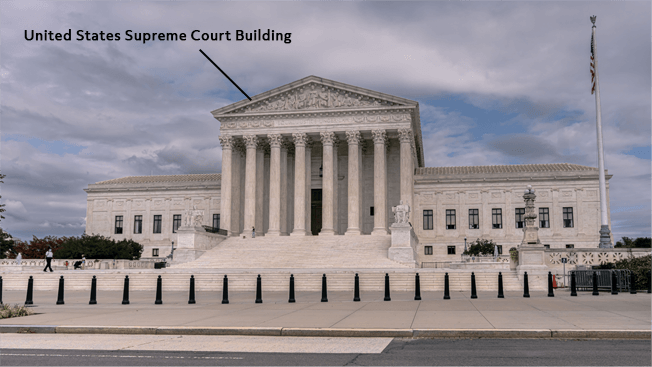 The Supreme Court, often referred to as SCOTUS, is the highest court in America. That means it has the final say on cases within its jurisdiction. I just outlined the basic jurisdiction from section 1, but like most things in the Constitution, that has been expanded and defined. It sits atop a structure of appellate (meaning appeals) courts which are a chain of federal courts known as circuit courts that decide all cases of federal law in America. Directly below the Supreme Court are the eleven state circuit courts, the DC circuit, and the federal circuit. You may have heard of the 9th Circuit Court of Appeals – this is the court that covers the ninth region, which includes the entire west coast and several other states, comprising about 20% of the US population. These regions determine where someone brings a case to court: if you live in New Jersey and wish to sue the federal government, you would do so in in the third circuit, not in the ninth.

Below the circuit courts are the district courts. These are the trial courts that have original jurisdiction over cases. Trial by jury is done only in these courts. If a case is appealed, no juries are used in higher courts.

Judges in these lower courts are also appointed for life by the President with the consent of the Senate. Unlike for the office of the president, there are no specific qualifications laid out in the Constitution for judges. They must, however, adhere to a Code of Conduct which is as follows:

There are various applications of this code, such as not hearing a case judges have personal knowledge or bias in.

Before a case can be brought to a federal court, several conditions must be met. According to the Administrative Office of the US Court, these are as follows:
“First, under the Constitution, federal courts exercise only “judicial” powers. This means that federal judges may interpret the law only through the resolution of actual legal disputes, referred to in Article III of the Constitution as “Cases or Controversies.” . . .
Second, in an actual case or controversy, the plaintiff (the person bringing the case to court) in a federal lawsuit also must have legal “standing” to ask the court for a decision. That means the plaintiff must have been aggrieved, or legally harmed in some way, by the defendant.
Third, the case must present a category of dispute that the law in question was designed to address, and it must be a complaint that the court has the power to remedy. In other words, the court must be authorized, under the Constitution or a federal law, to hear the case and grant appropriate relief to the plaintiff.
Finally, the case cannot be “moot,” that is, it must present an ongoing problem for the court to resolve. The federal courts, thus, are courts of “limited” jurisdiction because they may only decide certain types of cases as provided by Congress or as identified in the Constitution.”

When cases are brought before a court, they are done so in what is called an “adversarial” manner. This means that the plaintiff or prosecutor (the people who are suing) and the defendant (the people getting sued) present their facts and story to a neutral third-party, the judge. The two parties are responsible for doing whatever they legally can to make their best case.

There are two types of cases that you can bring before an American court: criminal and civil.

The judicial process in a criminal case differs from a civil case in several important ways. At the beginning of a federal criminal case, the principal actors are the U.S. attorney and the grand jury. The U.S. attorney represents the United States in most court proceedings, including all criminal prosecutions. The grand jury reviews evidence presented by the U.S. attorney and decides whether there is sufficient evidence to require a defendant to stand trial.” Grand juries have 12-23 people, and are designed to help the prosecutor determine if they possess enough evidence to indict (that is, to bring a formal accusation of a crime against) a suspect, then bring them before the court to stand trial.

The other, probably more understood jury, is the trial jury. Criminal juries have 12 jurors, and civil juries usually have between 6 and 12. Decisions must be unanimous. Trial juries are responsible for ascertaining “beyond a reasonable doubt” if the defendant is guilty based exclusively off the evidence presented by the prosecution and the rebuttals made by the defendant.

The 5th amendment to the US Constitution grants people the right to a grand jury, noting that “No person shall be held to answer for a capital, or otherwise infamous crime, unless on a presentment or indictment of a Grand Jury, except in cases arising in the land or naval forces, or in the Militia, when in actual service in time of War or public danger.” Grand juries serve an important role in the American legal system. They come into play before a trial. Trial juries determine if someone is guilty while the grand juries evaluate evidence to determine if they are probably guilty. If the at least 12 of the 23 jurors agree, then the grand jury indicts the suspect, and the case goes to trial.

But the federal courts aren’t the only court system. Again from the Administrative Office of the US Court: “. . . the great majority of legal disputes in American courts, civil or criminal, are addressed in the separate state court systems. State courts have jurisdiction over virtually all divorce and child custody matters, probate and inheritance issues, real estate questions, and juvenile matters, and they handle most criminal cases, contract disputes, traffic violations, and personal injury cases. In addition, certain categories of legal disputes may be resolved in special courts or entities that are part of the federal executive or legislative branches or state and federal administrative agencies.”

Alright, that’s all I’ve got! I hope you learned a lot from this video.