Welcome to this video overview on the integumentary system, also known as the skin. In this video, we’ll talk about the different layers of the skin, the skin’s role in maintaining temperature homeostasis of the body, and sebaceous and sweat glands.

The English word integument comes from the Latin word integumentum, which means “a covering.” The integumentary system is broadly defined as being composed of the skin and its accessory structures, but the terms “integumentary system” and “skin” are often used interchangeably. Accessory structures are also called specialized derivatives because of their biological origin and include hair, nails, and glands of the skin. Because skin is made up of various structures that participate in related functions, it can be considered an organ and is the largest organ in the human body by mass.

The top layer of the skin that faces the external environment is called the epidermis. The epidermis is made up of keratinized stratified squamous epithelium. Keratinocytes are a type of cell present throughout the epidermis that produces and stores keratin, which is a protein that gives skin, hair, and nails their hardness and ability to resist water. “Stratified” refers to the multiple layers of cells in the epidermis, and “squamous” refers to the cells’ flattened shape. An epithelium is a type of tissue that forms a barrier between the internal and external environments and regulates the flow of substances into and out of the body. 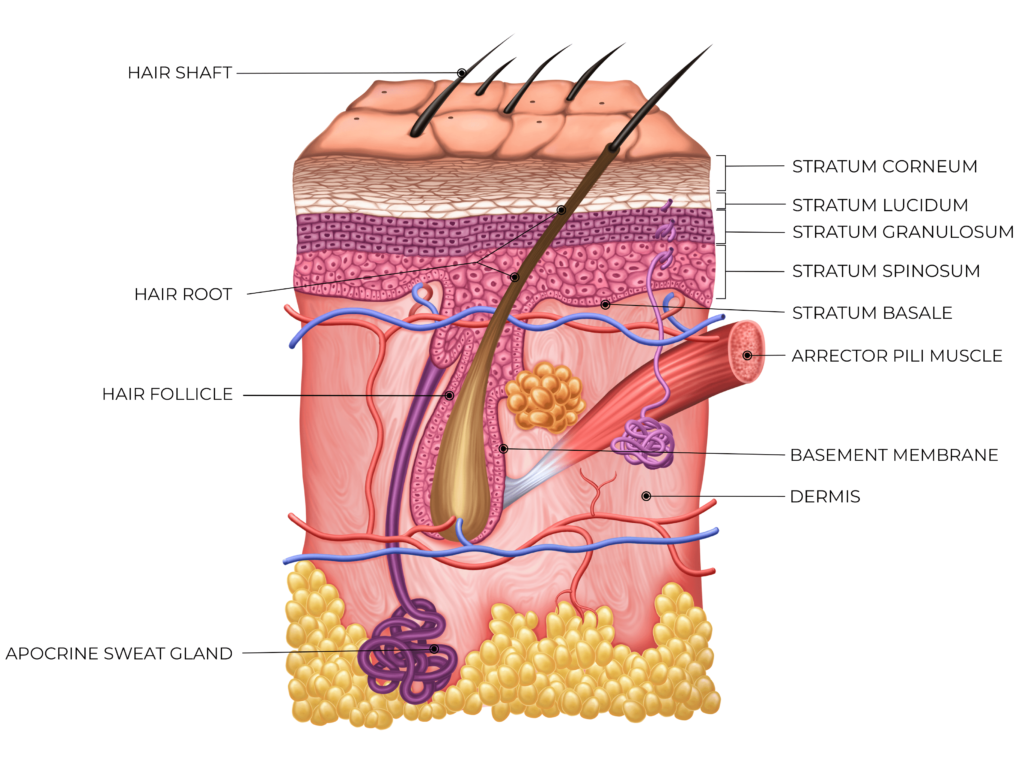 The epidermis is further divided into four or five layers, depending on its location on the body.

The outermost layer, called the stratum corneum, is made up of dried, keratinized cells that eventually slough off and are replaced by cells in the layer beneath it.

In the palms of the hands and soles of the feet, the layer that follows is a clear, thin, translucent layer called the stratum lucidum.

Underneath the stratum lucidum in the palms and soles, and directly under the stratum corneum in all other areas of the skin, is the stratum granulosum.

The stratum spinosum underlies the stratum granulosum, and also contains Langerhans cells, which break down foreign particles and damaged cells.

The most internal layer of the epidermis is the stratum basale, which is made up of basal cells that divide to produce keratinocytes and push other cell layers towards the top. Also present in the stratum basale are melanocytes, which are responsible for skin and hair color, and Merkel cells, which are receptors for sensing touch.

Below the epidermis is the layer of skin called the dermis. The dermis is composed of connective tissue that gives skin strength and structure. Blood and lymph capillaries present in the dermis bring oxygen and nutrients to the skin and remove waste.

The dermis is also divided into two layers.

The top layer of the dermis, called the papillary dermis, forms small projections into the adjacent stratum basale of the epidermis and is responsible for the visible, unique skin patterns such as fingerprints and footprints. Collagen in the papillary dermis forms loose connective tissue.

The larger, lower layer of the dermis is called the reticular dermis, and is primarily composed of collagen, elastin, and reticular fibers that form dense connective tissue. The reticular dermis also contains hair follicles, sebaceous glands, and sweat glands.

Both sebaceous and sweat glands are exocrine glands, meaning they secrete products to the outside of the body.

Varieties of sebaceous glands and sebum serve specialized functions in different locations in the body. For example, sebum mixes with other secretions on the surface of the eye to keep it lubricated and clean, and in the ear canal to produce cerumen, commonly known as earwax. During fetal development, sebum accumulates on the skin and contributes to the vernix caseosa. Sebaceous glands are highly responsive to hormones, and their size and activity are small during infancy and childhood, but increases during adolescence. A greater production of sebum is one factor that can contribute to acne, seborrheic dermatitis, and other skin conditions.

Eccrine glands produce the familiar thin, watery, salty secretion known as sweat in response to emotional stress or elevated internal or external temperatures. As sweat travels up to the pore, much of its salt content is reabsorbed, resulting in sweat containing about half of the salt content of plasma. This reabsorption of salt is interrupted in patients with the genetic disorder cystic fibrosis, leading to excessively salty skin.

Apocrine glands produce a more oily substance that mixes with sebum as it exits to the surface of the skin. Similar to sebaceous glands, apocrine glands are responsive to hormones, and are largely inactive until puberty. Apocrine sweat is odorless, but can react with bacteria on the skin’s surface to produce body odor. Additionally, mammary glands are thought to be specialized apocrine sweat glands that are modified to produce milk.

Although not technically part of the skin, the subcutaneous tissue directly underneath the dermis is often included as the innermost layer of the skin. Also called the hypodermis, it is composed mostly of adipose tissue, and functions as fat storage, cushioning, and insulation for the body.

The human body produces its own heat and regulates its own temperature. Heat is generated in the body mainly through metabolism, but sometimes through muscle activity as well, such as exercise or shivering. Heat transfers from warmer objects to cooler ones by radiation, conduction, convection, or evaporation. The skin plays a crucial role in maintaining the body temperature at a consistent level. Blood vessels in the dermis can either dilate to allow more blood to get closer to the surface of the skin to release heat, or constrict to keep blood toward the inner body and preserve heat. In addition, the production of sweat by eccrine glands allows for heat loss through evaporation.

Piloerection, colloquially known as goosebumps or goose pimples, is caused by the contraction of the arrector pili muscle, which is connected to the hair follicle. Upright hairs have the potential to trap warm air close to the skin and preserve heat, although this effect is minimal in humans with sparse body hair.

Let’s try a practice question to tie these ideas together.

The nurse is caring for a 29-year-old patient with a burn to a large area of the left arm, but no other injury or significant medical history. Which of the following is true for this patient? Select all that apply.

The correct answers are A and C.

Great job guys! Thanks so much for watching this review of the integumentary system. I hope that it was helpful. See you next time!