Mnemonics for Heart Anatomy and Physiology

Welcome to this video tutorial on heart mnemonics. First of all, we’re going to take a look at the anatomy of the heart. 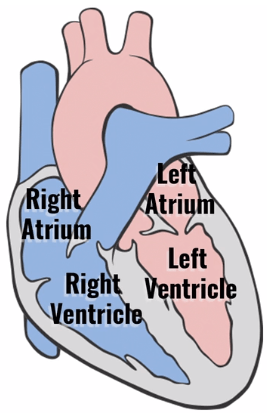 You can remember their location because A comes before V. The atrium is above the ventricle.

Next, we’ll take a look at the heart sounds heard with a stethoscope. As blood flows from the atria to the ventricles, it passes through the tricuspid and bicuspid valves, also known as the atrial ventricular or AV valves. These valves then snap shut, making the first heart sound S1, or “lub” in “lub dub.”

These valves then snap shut making the second heart sound S2 or “dub” in “lub dub.” This is the end of systole and the beginning of diastole. At the same time, the tricuspid and bicuspid valves just opened and the process repeats. 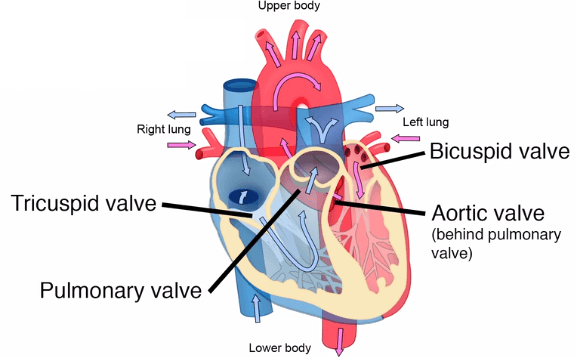 Pulmonary veins return blood to the left atrium through the bicuspid, or mitral, valve to the left ventricle and through the aortic valve, to the aorta and the rest of the body. Sound confusing? Just remember this mnemonic for the order of blood flow through the valves:

Listening to the heart is accomplished by using five systematic locations on the anterior chest wall. 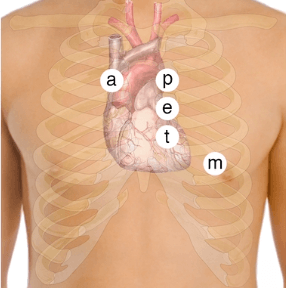 These landmarks are the places on the chest where you can best hear sounds from each of the respective heart valves, even though they are not at the exact anatomic site.

The stethoscope is positioned downstream from the flow of blood through the valves. Use the diaphragm of the stethoscope switching to the bell to hear lower-pitched sounds. The aortic valve area is on the right side at the second intercostal space. The pulmonic valve area is located on the left side at the second intercostal space.

When placing EKG leads on a patient, proper skin preparation and lead placement are essential for a clear EKG reading. Start by cleaning the skin briskly with an alcohol rub and allow to dry. Place the electrodes in their proper location and press firmly. 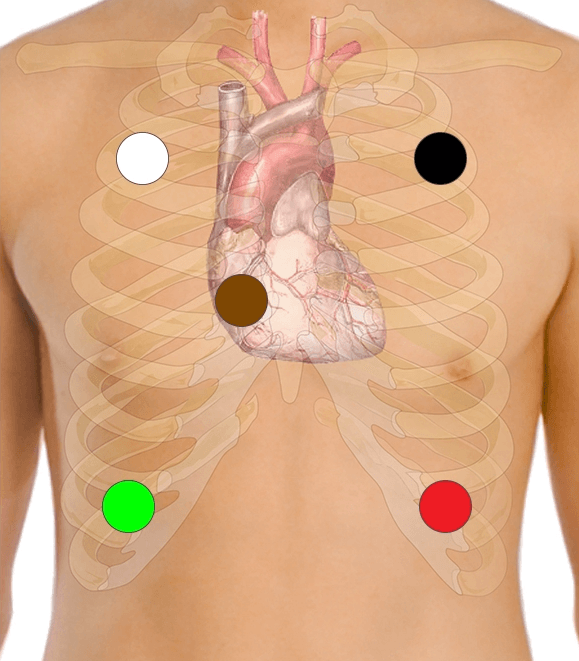 For placement, remember “white on right, with white clouds over green grass.” On the left, “smoke over fire (or black over red) with brown in the middle.”

Some murmurs are innocent and may disappear over time or last a lifetime without causing further health problems. Other murmurs are abnormal and more serious. You can remember the various causes of heart murmurs by remembering SPAMS.

S for stenosis, or narrowing of a valve. P for partial obstruction, which may be due to calcification, valve degeneration, coronary artery disease, or congenital abnormalities. A for aneurysms, in which an area of the aorta has become weak and enlarged. M for mitral or aortic regurgitation. This is when blood is leaking backward through the mitral or aortic valve. The heart has to work harder to force blood through the damaged valve and over time this can weaken or enlarge the heart leading to heart failure. S for septal defect, this is a hole in the septum that separates the ventricles or the atria.

A heart block is an abnormal heart rhythm known as an arrhythmia and can occur anywhere in the specialized conduction system of the heart. The electrical signals telling the heart to contract are partially or totally blocked between the atria and ventricles. Therefore, it is called an atrioventricular, or AV block.

The AV blocks are identified by their severity: first-degree or second-degree, which can be subdivided into Type I (Wenckebach) and Type II (Mobitz II), and then third-degree heart block. What does all of this mean? Here’s our further explanation.

First-degree heart block occurs when the electrical impulses are slowed down but they all successfully reach the ventricles.

This type rarely causes problems and is often seen in highly trained athletes, or as a result of some medications. On the EKG, the PR interval is greater than 0.2 seconds, indicating a conduction delay in the AV node.

Second-degree heart block exists when there is intermittent conduction failure and occurs in two varieties.

In Wenckebach, the electrical impulses are delayed further and further until conduction fails to reach the ventricles entirely. This is characterized by a PR interval that progressively lengthens until the P wave is not followed by a QRS complex—the QRS has dropped off after the P wave.

In this type, some of the electrical impulses are unable to reach the ventricles at all. The non-conducted P waves can’t get through and may occur at random or in patterned ratios. This is much more serious and may require a pacemaker.

Generally, the patient requires a permanent pacemaker. Here’s a simple poem to help you remember the types of AV heart blocks.

How do I remember the order of blood flow through the heart valves?

How do I remember where to put the stethoscope to hear the different lung sounds?

How do I remember where to place the EKG leads in a 5-lead EKG?

The 5-lead EKG requires placement of the leads in specific regions to capture an accurate result. Regardless of machine, these leads are white, black, brown, red, and green. To remember the placement of these leads, think of the following phrases. For the patient’s right side, “White on right with white clouds over green grass.” For the patient’s left side and middle, “Smoke (black) over fire (red) with brown in the middle.”

How do I remember the most common causes of heart murmurs?

Murmurs indicate abnormal or turbulent blood flow through specific vessels or chambers of the heart. The most common causes of heart murmurs can be remembered with the mnemonic SPAMS, Stenosis of a valve, Partial obstruction, Aneurysm, Mitral or aortic regurgitation, and Septal defect.

How do I remember the types of heart blocks?

In a first-degree heart block the PR interval is greater than 0.2 seconds with an otherwise normal rhythm. In a second-degree type I (Wenckebach) heart block, the PR interval progressively lengthens until the P wave is not followed by a QRS complex—the QRS has dropped off after the P wave. In a second-degree type II heart block (Mobitz II), conducted P waves can’t get through and may occur at random or in patterned ratios. In a third-degree heart block, none of the electrical impulses from the atria reach the ventricles, and the atria and ventricles beat independently. Remember these with the following poem: