Just a few short years ago, lots of people thought that the hobby of ham radio would be almost completely dead by now, but the opposite has happened – ham radio is officially more popular than ever, and nearly a million people in the US have an amateur radio license. Many people thought that the internet would kill amateur radio, but it actually helped it grow, by increasing the number of things you can do with a ham radio license, and by making the information on how to do it accessible to all. There are probably millions of people out there who had never heard of ham radio until they learned about it on the World Wide Web.

Here’s a Ham Radio Extra Class License Practice Test which you can use to see how well-prepared you are for the test.

In order to pursue the hobby of ham radio, a person needs a license from the federal government. There used to be six different kinds of licenses, but a while back the licensing process was streamlined, and now there are only three – Technician, General, and Extra. Technician is the entry level license. General is the intermediate level and may be taken by people who have passed the Technician exam. Extra is for people with the highest proficiency in ham radio, and who have already passed the first two exams. This page is about the Extra exam (we also have pages dedicated to the Technician License and General License exams.)

The Extra Class License exam consists of 50 multiple choice questions. The test is not being given on computers at this time, and must be taken with a pencil and paper. It’s possible to take the Extra exam on the same day you take the General exam, as long as you pass the General. In fact, it’s also possible to take all three exams the same day, starting with the Technician level. Many people have done this, and continue to do so, as it can be a real time saver. However, if a person fails the Technician exam, they can’t take either of the two higher level exams, and if a person fails the General exam, they can’t take the Extra exam. So it’s important to be well-prepared for each test that you plan to take.

Get Your Study Guide 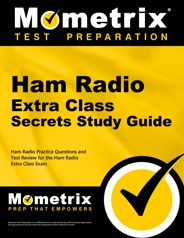 Mometrix Academy is a completely free resource provided by Mometrix Test Preparation. If you find benefit from our efforts here, check out our premium quality Ham Radio Extra Class study guide to take your studying to the next level. Just click the Ham Radio Extra Class study guide link below. Your purchase also helps us make even more great, free content for test-takers.