Hi, and welcome to this video on tangent! The word tangent has two different meanings in math. In geometry, it is used to denote when an object is touching another object at only one point, like when a line touches a circle at only one point.

We’re not concerned with that one today. Today we’re exploring tangent in trigonometry, where it is one of the “big three” trigonometric functions, along with sine and cosine. Like those two functions, it can be used to find the measure of a side or the measure of an angle in a right triangle. But it’s also a bit different than those two. It has a very different looking graph and a trig “identity” that makes it especially useful. There’s a lot to look at, so let’s get started!

We can use tangent to find the length of the side of a right triangle that is adjacent to an acute angle with a known measure as long as we know the measure of the side opposite that angle. We can also use it to find the opposite side if we know the adjacent side and the angle in question. The thing we don’t need to know to use tangent is the length of the hypotenuse, which is needed when using sine and cosine.

If you’ve studied trigonometry before you’re probably familiar with SOH-CAH-TOA, which is a way to remember how each of the “big three” trig functions are formed. The third part of it, TOA, helps us remember that Tangent is equal to the length of the Opposite side divided by the length of the Adjacent side.

Let’s look at an example problem so we can put this all together. 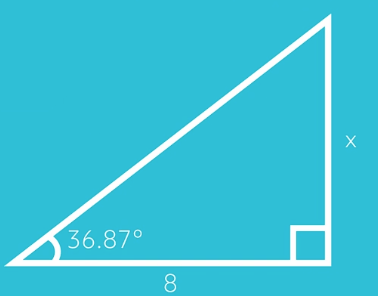 First, let’s take our equation and input our three values:

Multiplying both sides by 8 results in 6.000 equals x. So the measure of the opposite side is six!

The sine wave is shown in green and the cosine wave is in red. They look the same but are out of phase with each other. The tangent wave, however, does not look like these at all. 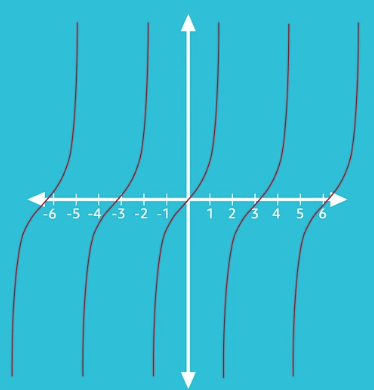 So what’s happening in between the vertical waves? It turns out there are these invisible vertical lines called asymptotes that indicate where the graph has no points. Here’s the same graph with the asymptotes unveiled as dashed blue lines: 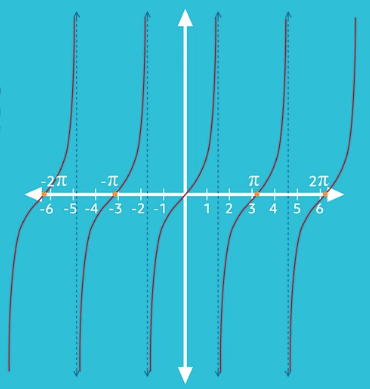 Another way to illustrate this is to look at this tangent identity:

So, not only is tangent equal to opposite over adjacent like we talked about before, it’s also equal to sine over cosine! If we remember the graph of cosine, it has points where it has a y value of zero.

At those points this tangent identity would be trying to divide by zero, which is undefined. Your calculator will probably display “error” if you try it!

This is how you know you’ve found an asymptote. We can also use this tangent identity to solve trigonometric identity puzzles, but we’ll get into those another time.

Okay, before we go, let’s review some of the details:

Tangent is the ratio of the side opposite the angle we know, or want to know, over the side adjacent to that angle, which gives us the equation:

We use tangent to find the length of the side of a right triangle that is adjacent to an acute angle with a known measure as long as we know the measure of the side opposite that angle. When we graph tangent functions, we see that the y-values have a range of negative infinity to positive infinity, with vertical asymptotes indicating where the graph has no points.

Triangle LMN is a right triangle, where Angle M is 90°. The length of Side LM is 7 meters, and the length of Side MN is 10 meters. What is the measure of Angle N? (Round your answer to the nearest whole number.)

The tangent of an angle is the ratio of the side opposite the angle over the side adjacent to the angle. Using this information, we know the length of Side ST is 8 units and the length of Side TU is 15 units. Since we have the legs of the right triangle, we can use the Pythagorean Theorem to solve for the hypotenuse, Side SU, which is 17 units.