Welcome to this video on fetal heart rate interpretation.

Assessment of the fetal heart rate (FHR) is an important indirect measure of fetal oxygenation during the antepartum and intrapartum stages of pregnancy. Fetal heart rate is measurable by ultrasound at around 6 weeks, and is assessed throughout the pregnancy, as well as during labor and delivery. A normal FHR ranges from 110-160 beats per minute.

During labor, it is important to assess the FHR to evaluate the fetal oxygenation status. A fetal doppler or fetoscope can be used to auscultate the FHR between, during, and immediately after uterine contractions. FHR is heard most clearly at the fetal back, so it is helpful to determine the fetal lie (or baby’s position) and fetal presentation to easily find the FHR.

Electronic fetal monitoring (EFM) is frequently used to provide a visual assessment of the fetal heart rate, which is especially beneficial during labor. Electronic monitoring has major advantages over auscultation with a fetoscope, because fetal distress can be detected by observing the continuous FHR and the periodic changes that occur during and after uterine contractions. Therefore, interventions can be timely and more effective. A reassuring EFM tracing identifies an oxygenated and neurologically intact fetus. The EFM can be applied either externally or internally. The external fetal monitor has an ultrasound transducer that is placed on the maternal abdomen with a water-soluble gel. Continuous sound waves are emitted, bounce off the fetal heart, and are picked up by the electronic monitor. The transducer may inadvertently pick up a maternal vessel, in which case the rate will be the same as the maternal pulse – quite a bit slower than the normal FHR. 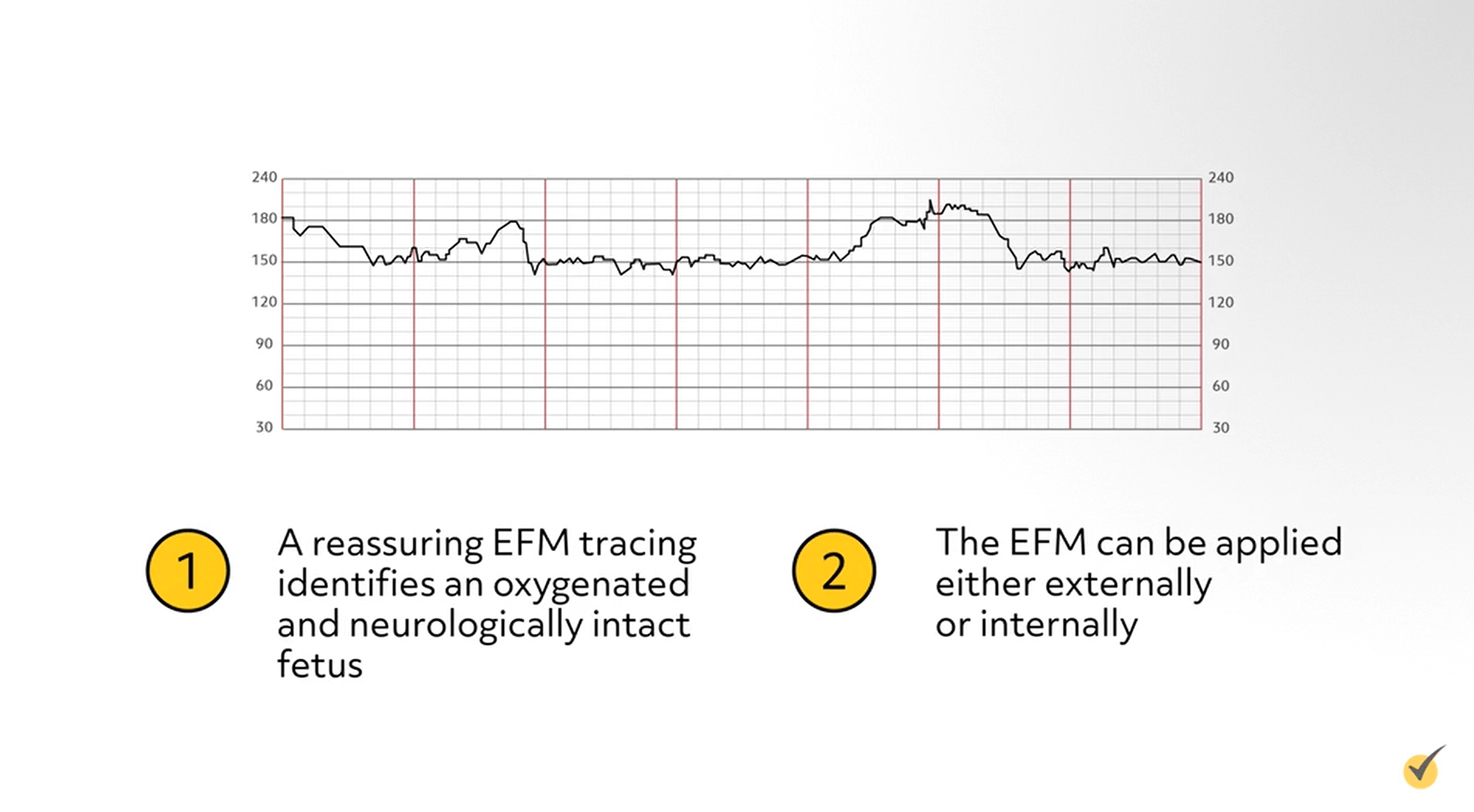 There are some disadvantages to external monitoring – if the fetus is very active, if the mother is moving frequently, if there is more than a normal amount of amniotic fluid present, or if the woman is obese. Internal monitoring of the FHR can also be accomplished by using an internal spiral electrode, which is attached to the skin of the fetal head. To insert the spiral electrode, the cervix must be at least 2cm dilated, the fetal part must be accessible by vaginal exam, and the membranes must be ruptured. The EFM is also used to monitor uterine contractions with the use of the tocodynamometer (or “toco”), which is a flexible disk that responds to pressure. The toco is placed against the fundus of the uterus, which is the area of greatest contractility. As the uterus contracts, pressure is exerted against the toco and transmitted to the monitor. Uterine contractions can be assessed for frequency and duration. If an intrauterine pressure catheter (IUPC) is inserted into the uterus, then the intensity of contractions can also be measured. An IUPC is part of the internal fetal monitor.

To evaluate fetal health and identify fetuses at risk, the nonstress test (NST) and the contraction stress test (CST) are used. The NST is a noninvasive assessment of the FHR, using the electronic fetal monitor to identify FHR accelerations with fetal movement. A normal result is a “reactive NST”, which shows at least two accelerations of 15 bpm, lasting 15 seconds or more with fetal movements over a 20 minute period of time. In a “nonreactive NST” the accelerations are less than 15 bpm or lasting less than 15 seconds. Accelerations of FHR imply an intact central and autonomic nervous system with normal fetal oxygenation.

Fetal age must be taken into consideration when performing the NST. Fetal neurologic maturity enables FHR acceleration usually around 26 to 28 weeks, but the accelerations are typically only 10 bpm for 10 seconds, rather than the 15 bpm for 15 seconds noted after 32 weeks. If decelerations in FHR are seen during the NST, it is reasonable to perform an ultrasound to evaluate what might be causing the decelerations. A contraction stress test (CST) uses either dilute oxytocin infusion or nipple stimulation until 3 mild contractions occur within 10 minutes, in order to predict the FHR response to the stress of labor. Due to the risk associated with inducing contractions, the CST is not usually performed. An alternative is the biophysical profile (BPP), which includes an NST, and also uses ultrasound to measure fetal breathing movements, gross body movement, fetal tone, and amniotic fluid volume.

There are several definitions to be familiar with when assessing FHR with an electronic fetal monitor. When you look at a strip of a FHR tracing, the squiggly line in the top section is the FHR, the lower section displays uterine activity, where contractions look like hills. The space between the dark red lines represents one minute.

The baseline FHR is the average FHR from a 10-minute segment of a tracing, rounded to the nearest 5 bpm interval. The normal range of FHR at term is 110 to 160 bpm. If there is a change in the baseline rate that lasts for more than 15 minutes, then it is interpreted as changed. The baseline rate may increase with prematurity, maternal anxiety and maternal fever; the baseline rate decreases with fetal maturity.

One final variation in the FHR baseline is the sinusoidal pattern, which has a persistent oscillating pattern in the shape of a sine wave, no variability, and no fetal accelerations. The sinusoidal pattern is rare but ominous and has been associated with severe hypoxia or severe fetal anemia.

Fetal tachycardia is defined as a baseline heart rate of 160 bpm or greater, lasting 10 minutes or more. The cause is usually related to maternal fever, or infection in the mother, fetus, or both. Most importantly, tachycardia may be a sign of early fetal hypoxemia.

An acceleration is defined as an abrupt increase in FHR above the baseline, that peaks in less than 30 seconds, is at least 15 bpm above baseline, and 15 seconds to 2 minutes in duration. A prolonged acceleration lasts from 2 to 10 minutes in duration. Most accelerations are associated with fetal movement, stimulation, or environmental stimuli, and are considered reassuring, as they are associated with an intact fetal central nervous system and fetal well-being.

Early deceleration of the FHR is a gradual decrease of greater than 30 seconds to nadir (bottom) of the deceleration, and then return to FHR baseline. The bottom of the deceleration mirrors the peak of the contraction; they are caused by head compression and have no pathological significance.

Late deceleration of the FHR is a gradual decrease of greater than 30 seconds to nadir and return to baseline associated with a uterine contraction, but the nadir occurs after the contraction. Late decelerations are nonreassuring, indicating uteroplacental insufficiency. A single late deceleration in an otherwise reassuring pattern is not clinically significant, but a pattern of persistent late decelerations requires attention. Some interventions to correct late decelerations include stopping oxytocin if infusing, changing mom’s position to lie on her left side, correct maternal hypotension by lowering her head and increasing the IV infusion rate, and administer oxygen by mask. 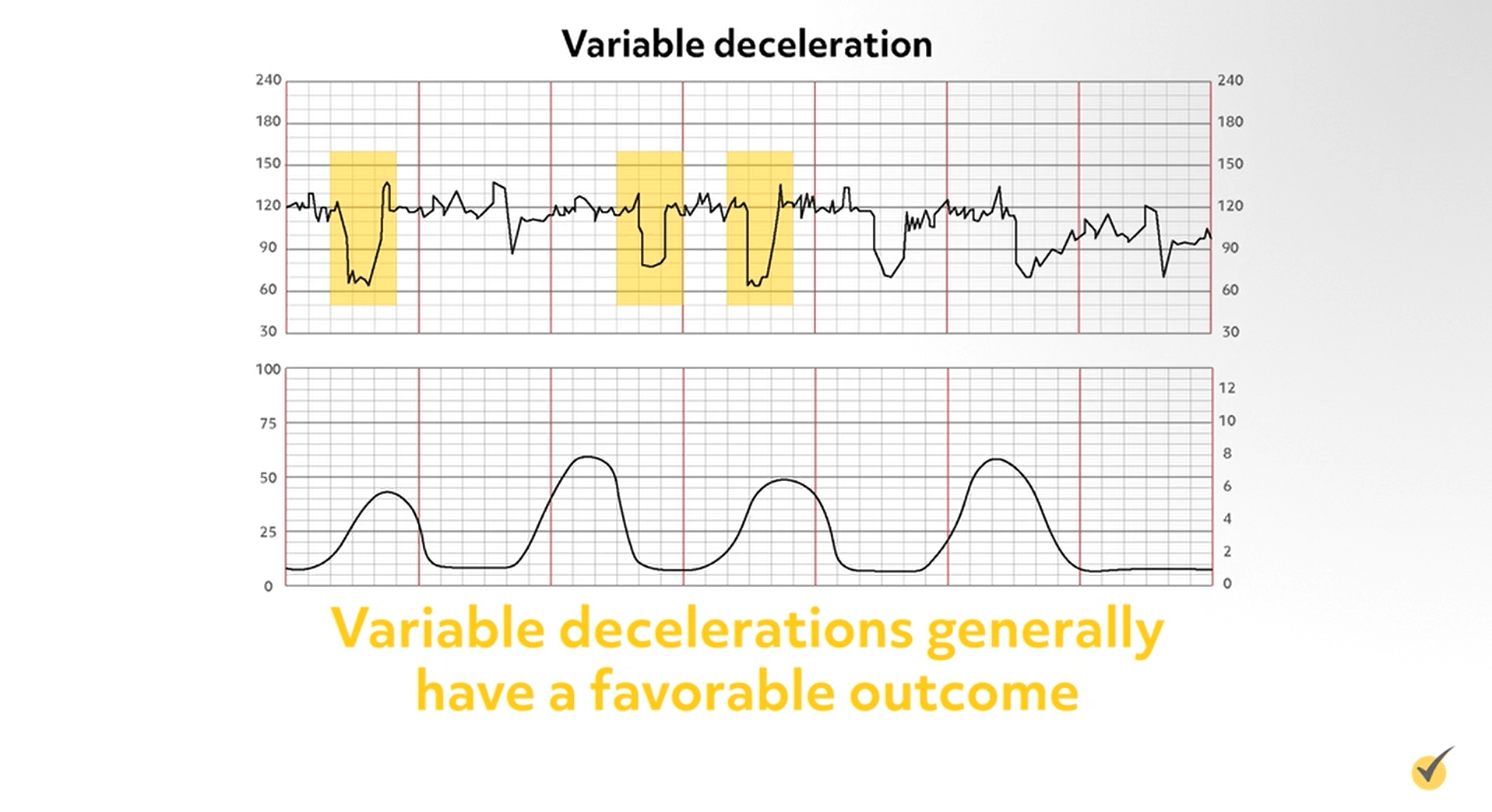 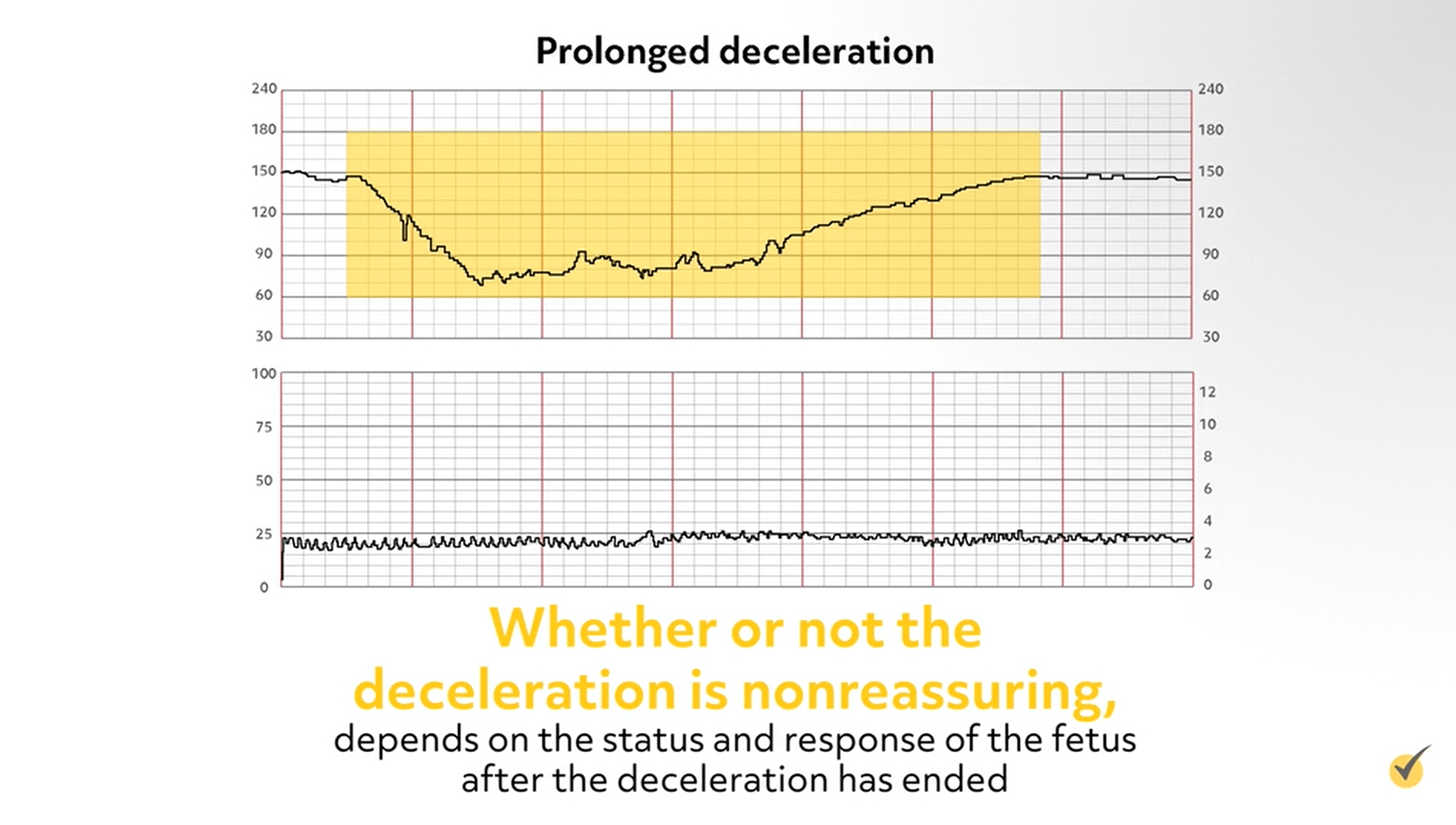 To set standards for clearer FHR interpretation, a three-tier system for categorizing intrapartum EFM has been established. A category 1 FHR pattern is defined as having a baseline rate of 110-160 bpm, moderate variability, no late or variable decelerations, early decelerations present or absent, and accelerations present or absent. Category 1 patterns are considered normal and no intervention is necessary.

Let’s jump to the category 3 pattern, which is defined as either a sinusoidal pattern OR absent variability with recurrent late decelerations, recurrent variable decelerations, or bradycardia. Category 3 tracings are considered abnormal because studies have found that these patterns are associated with an increased risk of fetal hypoxic acidemia. Early detection and effective intervention before acidemia becomes severe can prevent neonatal morbidity or mortality.
Once a category 3 pattern is identified, preparations for a possible cesarean section delivery should be made while resuscitative measures are initiated to improve uteroplacental perfusion and oxygen delivery. If scalp stimulation or resuscitative interventions result in an improved FHR tracing, then a c-section can be postponed. However, if there is no improvement in FHR tracing, delivery should be imminent since 10 minutes of a category 3 pattern, especially with a lengthy deceleration, has a significant association with acidemia.

We covered quite a bit of material here – let’s go over some questions for review.

Which of the following definitions describe a variable deceleration?

If you chose B, you are correct! A variable deceleration is one in which the FHR goes up and down abruptly, due to umbilical cord compression. They are very common and generally have a favorable outcome, but should be monitored for a persistent pattern that may lead to fetal distress.

If you chose B, 110 to 160 bpm, you are correct! That is considered a normal baseline FHR.

And one final question…
Which of the following describes a category 1 FHR pattern?

If you chose C, you are correct! Category 1 patterns are considered normal and no intervention is necessary.

Thanks for watching! We hope this video on fetal heart rate interpretation leaves you prepped and empowered!