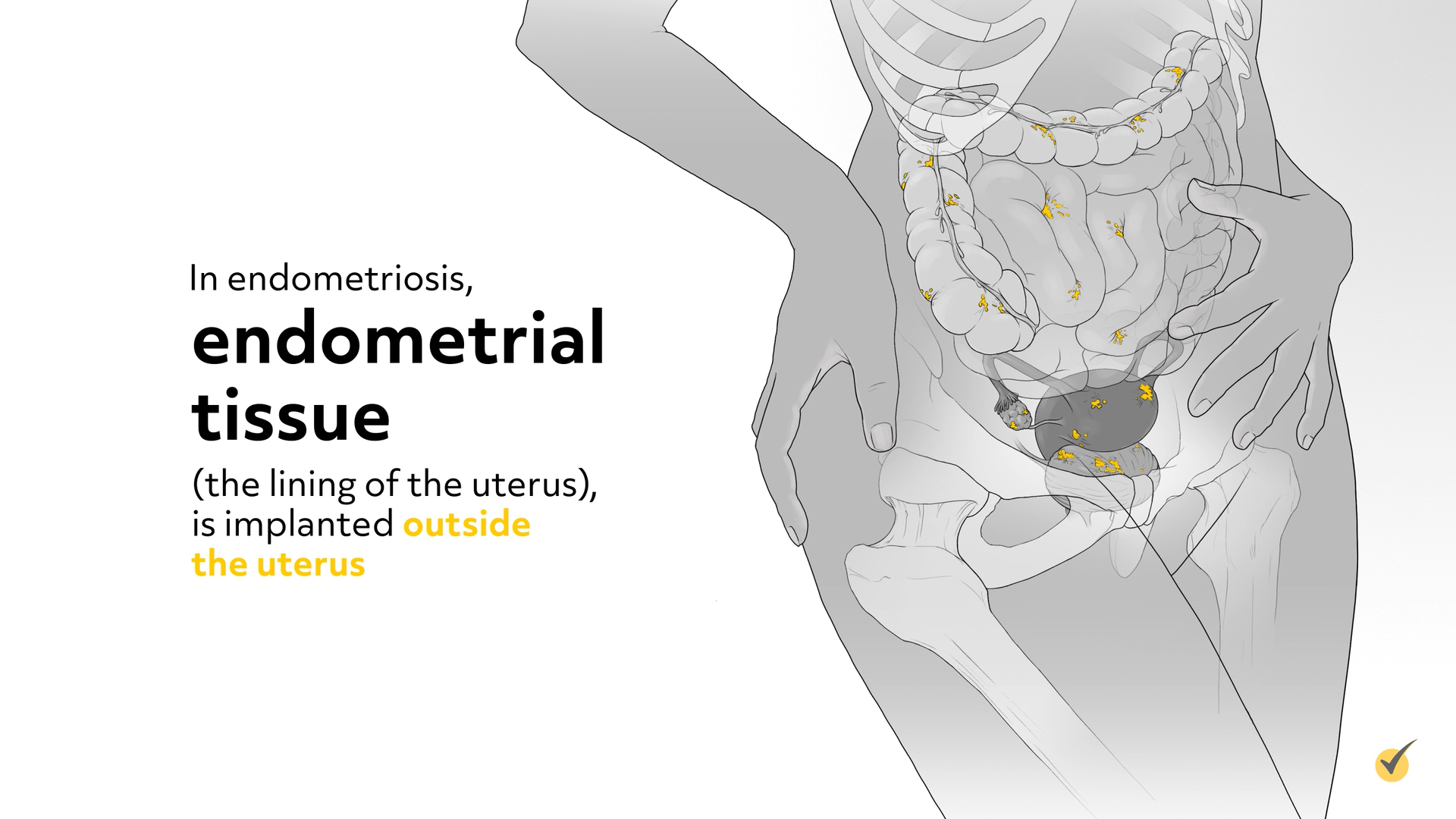 The exact cause of endometriosis is unknown, but it is thought that endometrial cells transported from the uterine cavity during menstruation may flow backward through the fallopian tubes toward the ovaries into the abdominal cavity, causing the cells to become implanted at various sites. Endometrial cells may also be transported through the blood or lymphatic vessels to another location. Heredity does seem to be a factor among first-degree relatives with endometriosis (mothers, sisters, and children). It is also more likely to occur in women that have delayed childbearing or nulliparity, early menarche, late menopause, shortened menstrual cycles that are heavy and last a long time, certain structural abnormalities of the uterus, and exposure to DES in utero. Endometriosis seems to occur less often in women that have had multiple births, breastfeed for a long time, late menarche, use low-dose oral contraceptives, and exercise regularly. 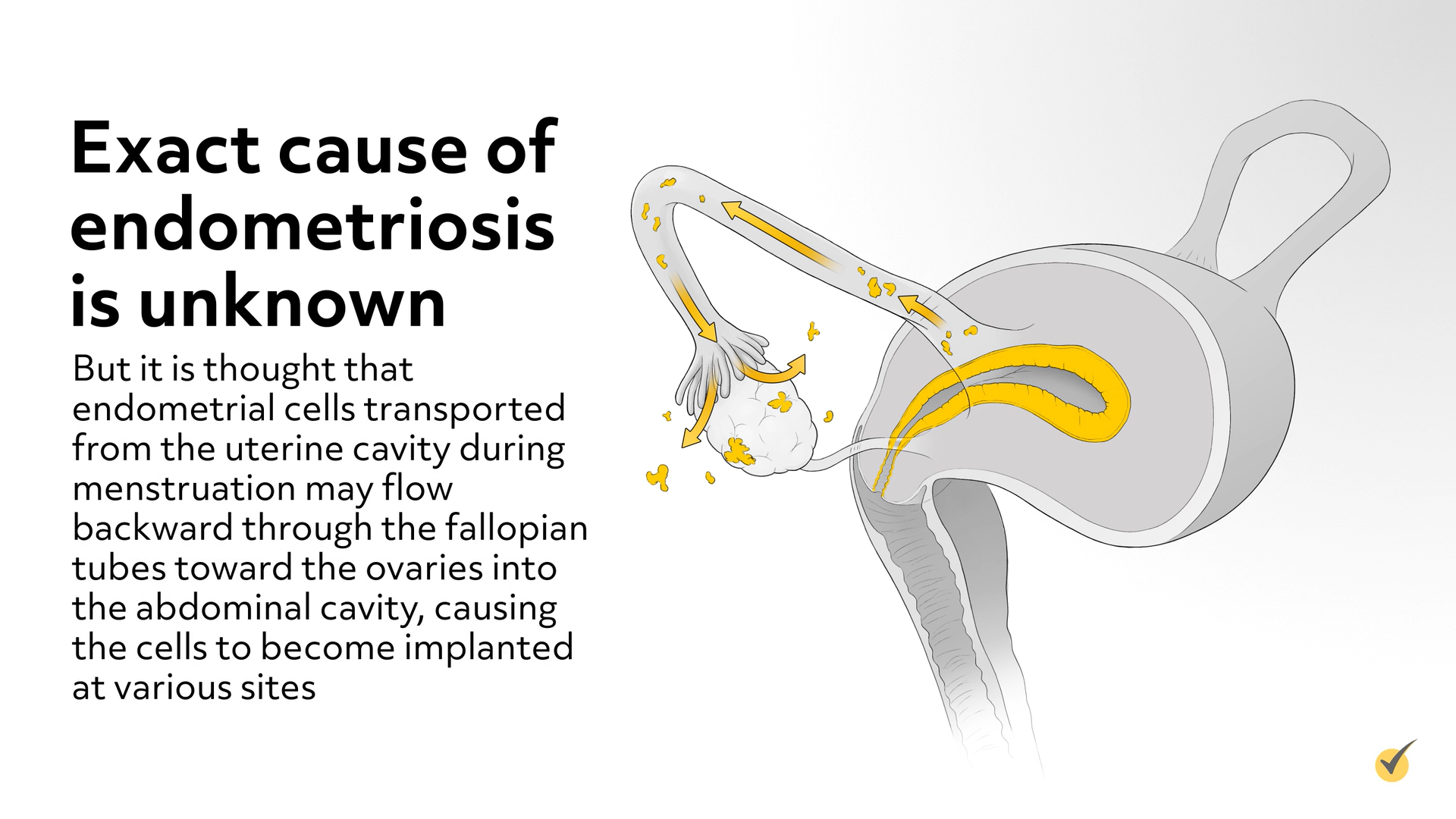 The primary symptom of endometriosis is pain in the lower abdomen and pelvic area. The pain is usually worse just before or during menses (called dysmenorrhea) and during sexual intercourse (called dyspareunia). Menstrual irregularities, such as heavy bleeding and spotting before menstrual periods, may also occur. Misplaced endometrial tissue responds to estrogen and progesterone, just as the normal endometrial tissue in the uterus, so the misplaced tissue may also bleed during menstruation causing cramps and pain. The severity of pain does not depend on the amount of misplaced tissue, but for many women, endometriosis has been present for several years before it causes pain. The degree of pain correlates with the depth and location of tissue infiltration. The bleeding of the misplaced endometrial tissue may irritate nearby tissues, causing scar tissue and adhesions in the abdomen, interfering with organ function. Often, if the endometrial tissue is located on the bladder, it will cause pain above the pubic bone, dysuria (pain during urination), urinary frequency and urge incontinence, and hematuria (urine that contains blood). When endometrial tissue is implanted on the large intestine, it causes abdominal bloating, diarrhea or constipation, pain during bowel movements, or rectal bleeding during menses. Endometrial tissue on the ovaries can cause an endometrioma (blood-filled mass), which sometimes ruptures or leaks, causing sudden, sharp abdominal pain. Infertility commonly occurs with endometriosis, possibly caused when the misplaced tissue blocks the egg’s passage from the ovary into the uterus. 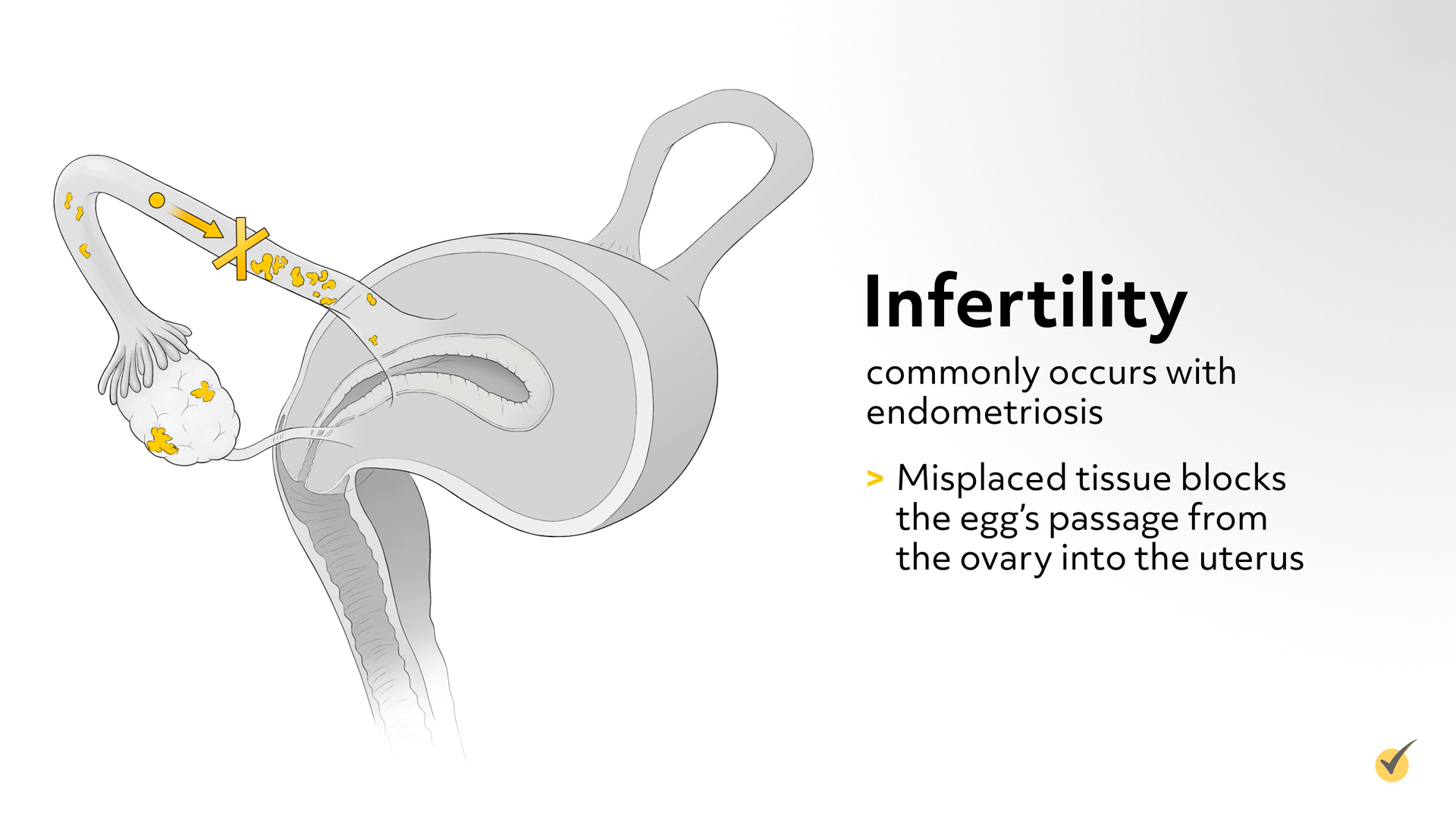 Diagnosis of endometriosis is suspected based on the typical symptoms, but confirmed by visualizing with pelvic laparoscopy, or sometimes laparotomy, vaginal examination, sigmoidoscopy, or cystoscopy. The tissue implants are typically red, blue, or purplish brown spots, greater than 5mm in size. Endometriosis is staged, according to the number, location and depth of implants; and the presence of endometriomas and adhesions. Stage 1 is minimal, with a few superficial implants; stage 2 is mild, with more and slightly deeper implants; stage 3 is moderate, with many deep implants, small endometriomas on one or both ovaries, and some adhesions; stage 4 is severe, with many deep implants, large endometriomas on one or both ovaries, and many dense adhesions, sometimes with the rectum adhering to the back of the uterus.

Treatment for endometriosis depends on the woman’s symptoms, stage of endometriosis, age, and pregnancy plans. NSAIDs can be given for pain. Drugs that suppress ovarian function are given to inhibit the growth and activity of endometrial tissue implants. Combination oral contraceptives (estrogen plus a progestin) are commonly used, but if they cannot be taken or are ineffective, other drugs that suppress the activity of the ovaries are used. These include progestins (such as medroxyprogesterone and norethindrone), GnRH (Gonadotropin-releasing hormone) agonists (such as leuprolide and nafarelin), or Danazol (an androgen). Combination oral contraceptives are primarily used for women who do not plan to become pregnant soon. GnRH agonists suppress estrogen and progesterone production by the ovaries, but must not be taken more than 6 months, because long term use may result in bone loss and lead to osteoporosis. Danazol inhibits ovulation; however, the side effects of weight gain and development of masculine characteristics, limit its use. These drugs may or may not eliminate endometriosis, but even if they do, it often recurs after the drugs are stopped.

For most women with moderate to severe endometriosis, it is most effective to surgically remove as many implants as possible with laparoscopic surgery. Implants that are superficial can be ablated; implants that are deep and extensive should be excised. The following situations indicate the need for laparoscopic surgery – moderate to severe pain that does not respond to drugs, significant pelvic adhesions, pain during intercourse, presence of endometriomas, fallopian tube obstruction, and a desire to maintain fertility. Unfortunately, surgical removal of endometrial tissue implants is only a temporary fix for most – many women have a recurrence of endometriosis unless they take drugs to suppress the ovaries or the ovaries are removed. A total hysterectomy, without removing the ovaries, is often appropriate for women who have completed childbearing, especially when drugs are not relieving the abdominal or pelvic pain. If a woman has had recurring endometriosis and is near menopause, a hysterectomy plus bilateral salpingo-oophorectomy may be preferred to completely eliminate endometriosis. When the ovaries are removed the result is similar to that of menopause, with decreased estrogen levels. A progestin can be given to help prevent any remaining misplaced endometrial tissue from growing and to reduce symptoms that may persist after the ovaries are removed.

Let’s look at some questions to review…
Which patient has the highest risk for endometriosis? Choose all that apply.

If you chose #2 and 4, you are correct! Females with a 1st degree relative with endometriosis have a 10 times greater risk for developing endometriosis than the average female. Nulliparity and early menarche are also factors that increase a woman’s risk for endometriosis.

Let’s look at another question…
Which of the following are possible symptoms of endometriosis? Choose all that apply.

Thanks so much for watching. See you guys next time and, as always, happy studying!