Hi, and welcome to this video about the shape and structure of the amazing planet that we live on. First, we’ll discuss the circumference of the planet, and then we’ll go through the middle of it and see what’s on the inside.

Let’s start with the shape of the Earth. As we all know, the “Flat Earth” theory is a myth; Earth is a sphere. Right? Well … almost.

For the sake of constantly explaining the reasoning, we normally just go with “Earth is a sphere…,” but that’s not entirely true. It looks pretty spherical, but it’s actually an ellipsoid! The Earth in particular happens to be a special type of ellipsoid, called an oblate spheroid.

To help explain exactly what an ellipsoid is, I want you to imagine a beach ball in your hands. Place one of your hands on the top, and one on the bottom. Now, squeeze it. Not a lot; just a little. You’ll notice that where your hands are squeezing, the ball becomes more flat. It also bulges slightly in the middle. Congratulations! You have just created an ellipsoid!

Now that you have the basic idea, check out these figures for a more accurate visualization. 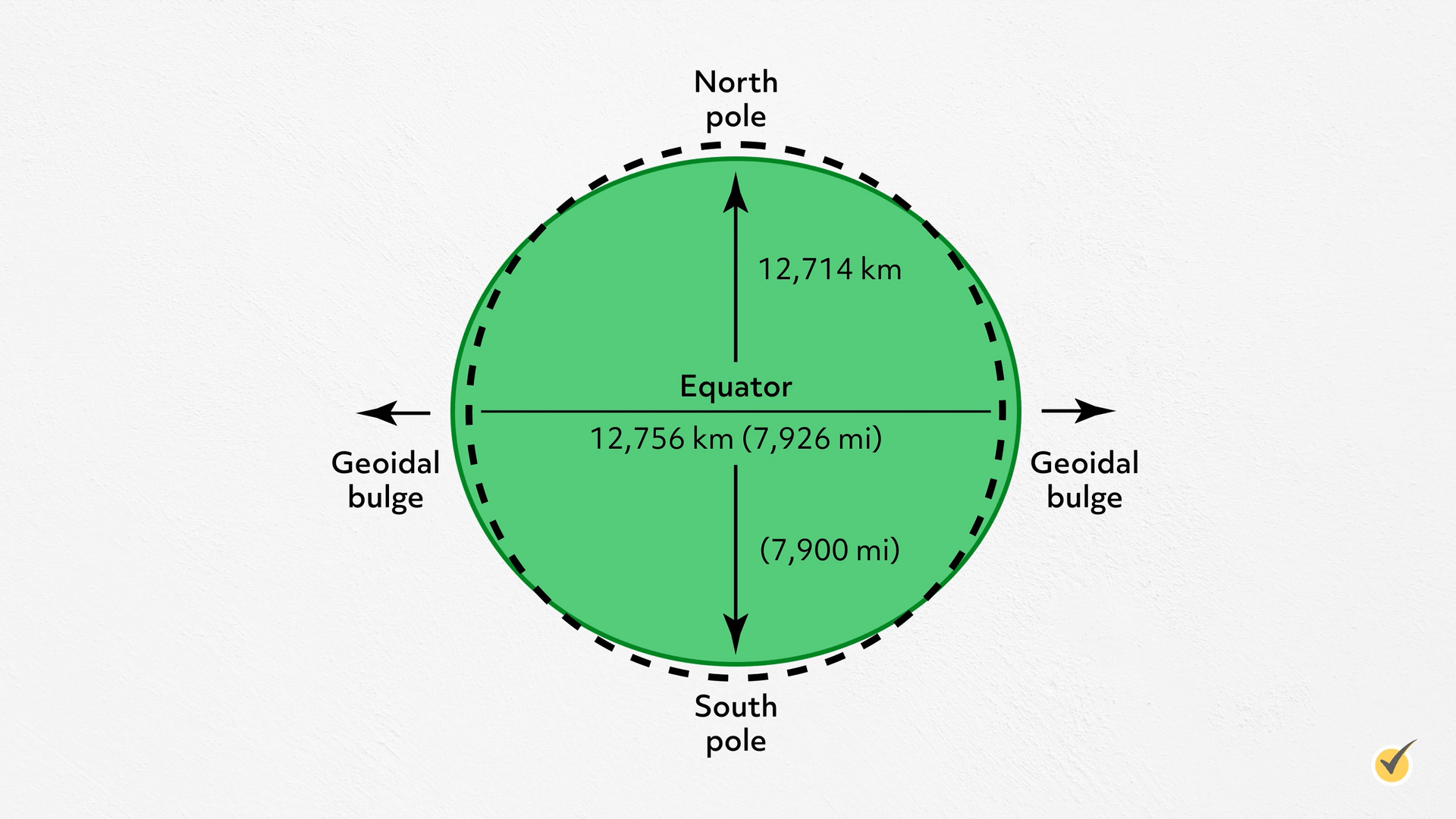 The dotted line here is drawn as a perfect circle. The shaded region is Earth’s actual shape. Notice how, just like the beach ball, it is flatter at the poles, and protrudes slightly in the center. This protrusion is called the geoidal or equatorial bulge. Also note the diameter of the Earth through the Equator and the North and South Poles. At the equator, Earth is roughly 7,926 miles wide and only 7,900 miles long from the North Pole to the South Pole. The circumference, which is all the way around the Earth, is shown here. As you can see, the equatorial circumference is 24,900 miles at the bulge, which is a bit more than the polar circumference. 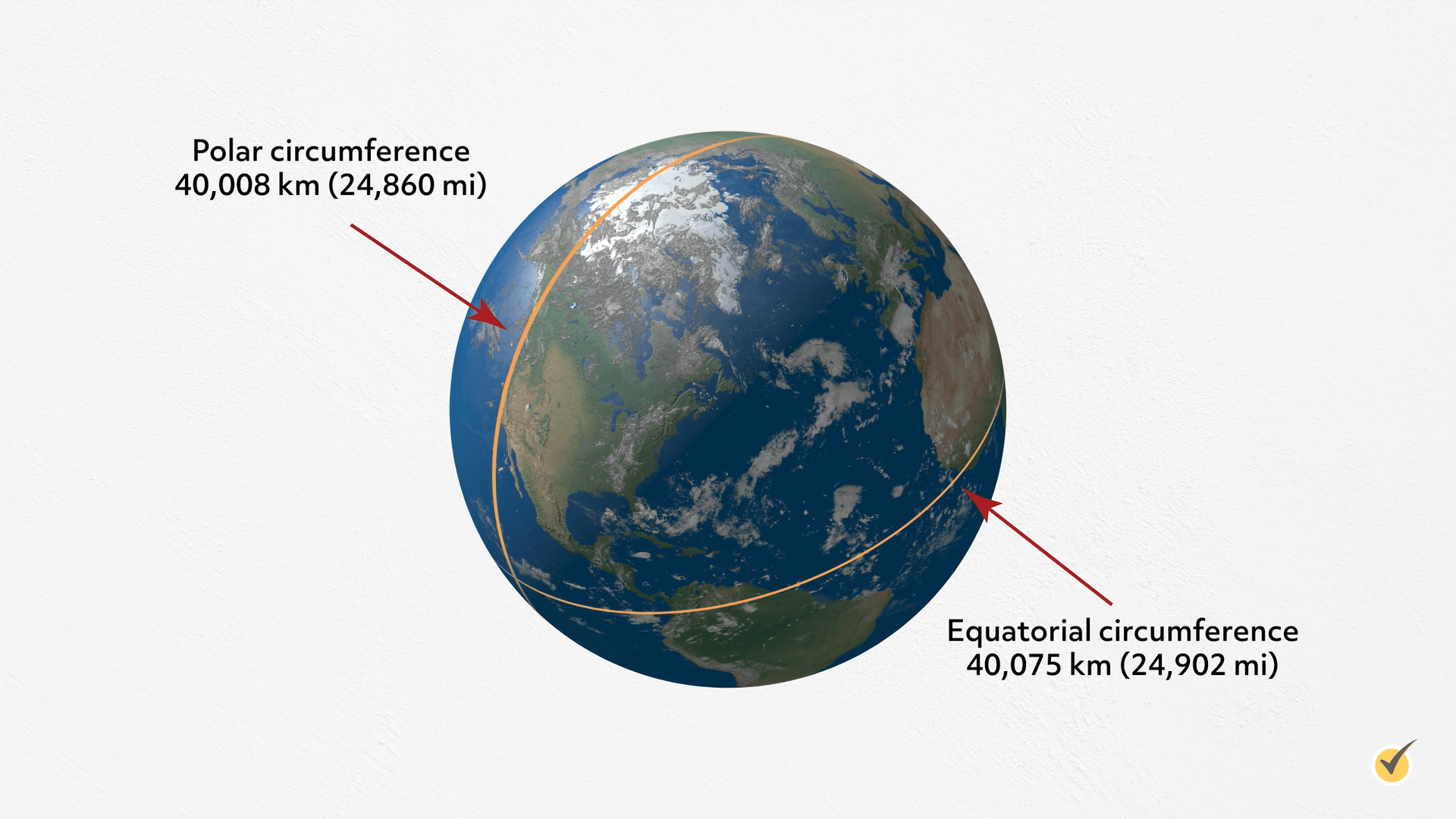 Okay, now it’s time for our journey to the center of Earth. If you dug a hole straight through, it would take about 4,000 miles to reach the center. But we can’t actually do that because Earth is composed of four impenetrable layers: the lithosphere/crust, the mantle, the outer core, and the inner core. 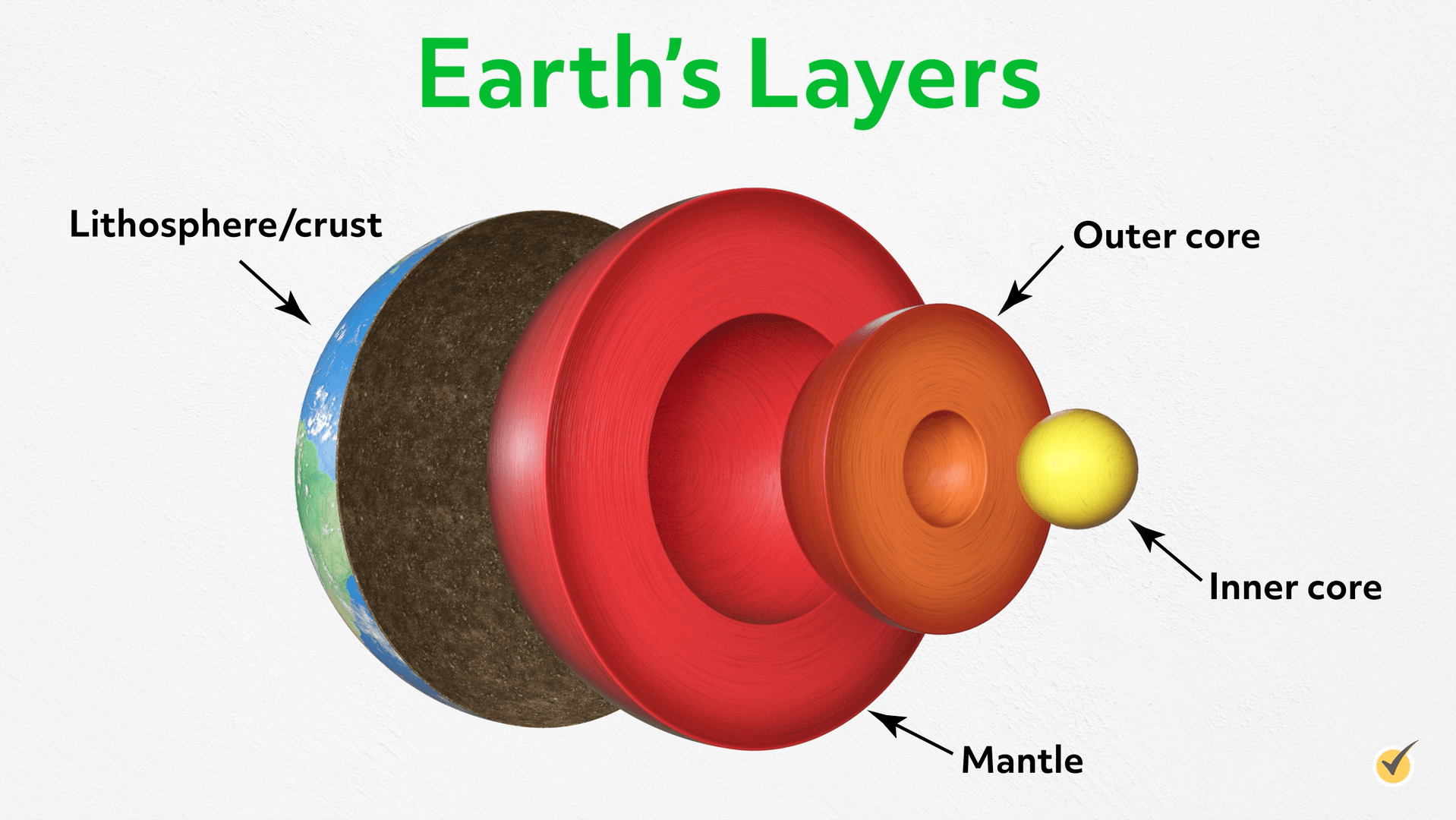 Let’s start at Earth’s surface, and work our way in. First up is the Lithosphere!

The lithosphere is composed of Earth’s outermost crust and the uppermost mantle. Relative to the radius of the planet, which is approximately 4,000 miles; the Earth’s crust is VERY thin. Now, there are two different types of crust: oceanic crust and continental crust. Oceanic crust is approximately 4-6 miles thick, while continental crust can be 22-25 miles thick. Oceanic crust is created when magma erupts from mid-ocean ridges onto the sea floor. This magma cools immediately and becomes basalt; an extremely heavy and dense mafic extrusive igneous rock. Let’s break those terms down. A mafic rock is an igneous rock that is rich in dark-colored minerals like magnesium and iron. An extrusive igneous rock is one that has flowed onto the surface of the Earth as magma, and has been cooled. Basalt falls under all of these descriptions.

The other type of crust is the continental crust. Despite being much thicker than the oceanic crust, the continental crust is much less dense. Most of the composition is granite; a felsic intrusive igneous rock. A felsic rock is an igneous rock that is rich in light-colored minerals like feldspar and quartz. An intrusive igneous rock is one that has cooled and solidified beneath Earth’s surface, and may become exposed at the surface due to erosion. The main difference between mafic and felsic rock is their density. As mentioned, felsic rock is much less dense than mafic rock. This is partially why the land you and I stand on is not underwater; the less-dense granite-rich continental crust essentially floats on top of the dense basalt-rich oceanic crust.

Under the crust, to a depth of about 60 miles, is the uppermost mantle, which is composed of solid rock. The mineral olivine makes up 55% of the upper mantle, while the mineral pyroxene makes up 35%. Both of these are common mafic-rock-forming minerals.

Together, Earth’s crust and the uppermost part of the mantle make up the lithosphere. Next, let’s go to the mantle!

Like the lithosphere, the mantle has several sublayers: the asthenosphere and the mesosphere.

The uppermost part is already included as part of the lithosphere. Now, the asthenosphere is semi-molten and is highly viscous. When a liquid is highly viscous, it simply means there’s more friction and resistance to flow (think like molasses or honey). 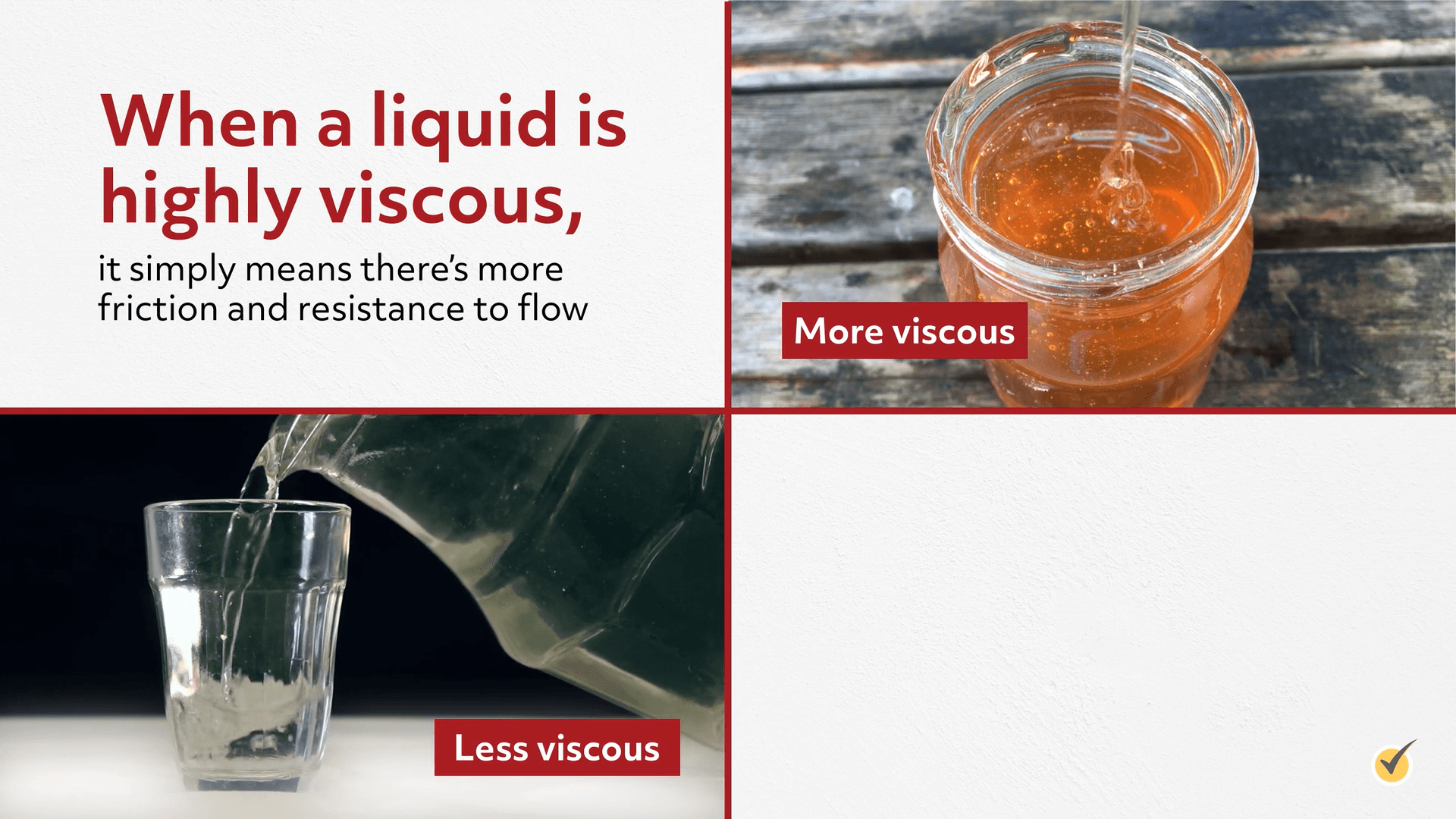 This viscous, semi-liquid part of Earth’s mantle is what allows the tectonic plates to move above it! This layer is made of mostly mafic rock, as well.

The asthenosphere extends to a depth between 650 km – 700 km. In this range, we have what’s commonly referred to as the “660 km discontinuity.” This refers to the sharp boundary at approximately this depth where seismic waves travel exponentially faster. Seismic waves travel MUCH quicker through solids than liquids. This increase in velocity at about the 660km range indicates that high temperature and pressure are compressing the minerals found down there into a more solid form. Specifically, ringwoodite is transformed to bridgmanite, which is ultramafic and, therefore, extremely dense. The mantle is the thickest layer, and represents about 84% of Earth’s total volume.

Next up is the outer core, which extends to a depth of roughly 3,200 miles. The core is a molten metal mixture made of mostly iron and nickel, with temperatures reaching up to 9,000°F. Iron and nickel are both magnetic. The movement of these magnetic metals deep within Earth is what generates our magnetic field! This magnetic field is what protects us from harmful solar winds that would otherwise strip away our ozone layer. How interesting is it that all of these things are connected! 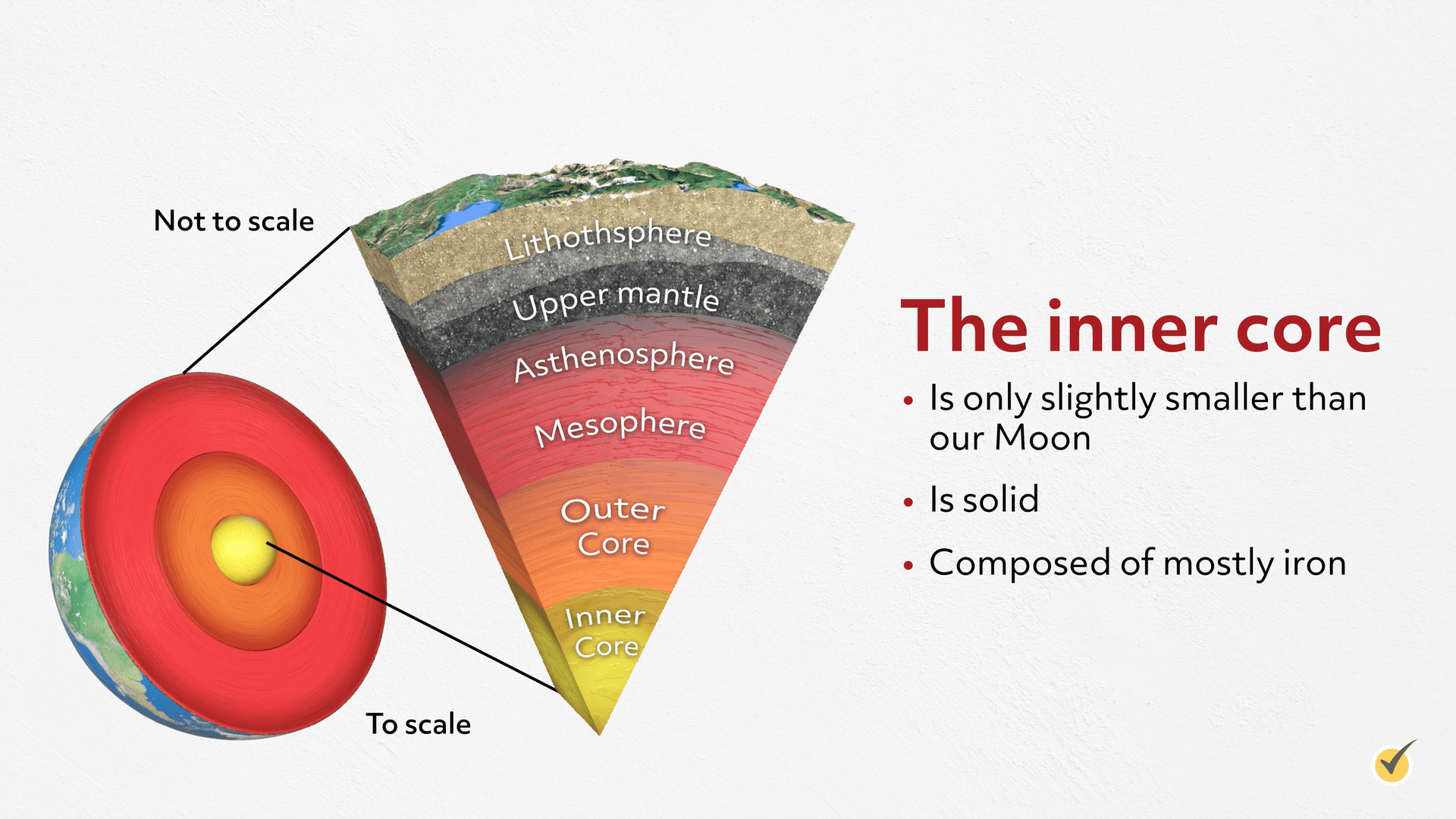 And at last, we’ve finally reached Earth’s inner core, which is only slightly smaller than our Moon. The inner core is solid and composed of mostly iron. Although temperatures here reach 13,000°F, the iron cannot melt. The reason for this is the intense pressure from the overlying planet, which keeps the metal in a solid state.

Okay, we started at Earth’s surface and went layer-by-layer down to the core. Now, let’s go over a few quick review questions to see what you can remember!

What shape is the Earth?

The correct answer is A, ellipsoid. The Earth is NOT a sphere because of the equatorial bulge. The geoid is a hypothetical shape of the Earth based on sea level.

Which layer of Earth is the thickest?

The correct answer is C, mantle! It takes up about 84% of Earth’s volume.

Which type of rock is more dense?

Well, volcanic rocks ARE igneous, and igneous rocks can be mafic or felsic. Which did you choose? Mafic rocks are more dense than felsic rocks, so the correct answer is A, Mafic.

Okay, that’s all for this review! Thanks for watching, and happy studying!