Welcome to this video on drug suffixes! Remembering thousands of drug names and what they do is an enormous task, so I’m hoping this video will help you in your study of pharmacology.

First, we’ll take a look at some blood pressure medications.

Beta-blockers reduce blood pressure by slowing the heart rate and reducing myocardial contractility. They are given for hypertension, CHF, and chronic heart failure.

Diuretics are often used in conjunction with blood pressure medication.

Drugs ending and -actone are potassium-sparing diuretics, such as spironolactone (also known as aldactone). These diuretics increase the fluid passed out by the kidneys while retaining potassium in the body (considered a weak diuretic).

Thiazide diuretics end in -thiozide and are used mainly for treating high blood pressure and edema, but potassium is lost in the process. Hydrochlorothiazide, or HCTZ, is commonly used.

Let’s look at another group of drugs that cause hypotension, or low blood pressure, as a side effect but with other intended purposes. Drugs used to treat erectile dysfunction end in -afil and include sildenafil (Viagra), vardenafil (Levitra), and tadalafil (Cialis). These medications cause direct coronary vasodilation, and special precautions should be taken in men with cardiovascular disease.

Statins/antilipidemic drugs end with, you guessed it, -statin, including atorvastatin (Lipitor) and simvastatin (Zocor). These are anti-cholesterol drugs that reduce LDL cholesterol and cardiovascular disease.

Thrombolytic drugs end with -ace, such as streptokinase or alteplase, which is also known as tPA (tissue plasminogen activator). These are clot-buster drugs given to break down unwanted blood clots causing heart attacks and strokes. The sooner treatment is given, the quicker blood flow is restored to the area.

If the medication ends with -arin, it’s most likely an anticoagulant, such as heparin or warfarin. Anticoagulants prevent blood coagulation or prolong the clotting time.

Now, let’s take a look at some antibiotics.

There are tetracyclines, which have an easy ending -cycline, such as tetracycline or doxycycline. These broadspectrum anti-microbial drugs are used in treating and preventing bacterial infections. Aminoglycosides are another antibiotic ending with -mycin, such as neomycin and tobramycin. Fluoroquinolones are a broadspectrum antibiotic ending with -floxacin, such as ciprofloxacin and levofloxacin.

While antibiotics treat bacterial infections, antivirals treat a virus infection. If the ending is -vir, it’s most likely an antiviral, such as acyclovir. Let’s turn our focus to some drugs that treat intestinal issues.

Drugs ending and -azine, such as promethazine, are an antiemetic used to treat nausea and vomiting.

Proton pump inhibitors end with -prazole, such as lansoprazole (Prevacid) and omeprazole (Prilosec). These are anti-ulcer drugs that reduce gastric acid production.

Another anti-ulcer drug is the H2 receptor antagonists, or H2 blockers, which block the action of histamine in the stomach, decreasing the production of stomach acid. These drugs usually end in -tidine, such as cimetidine (Tagamet), famotidine (Pepcid), and ranitidine (Zantac).

Bronchodilators dilate the bronchi and bronchioles, decreasing resistance in the airway and increasing airflow to the lungs. These medications are given for asthma and COPD and include drugs ending in -terol and -phylline, such as albuterol, levalbuterol, theophylline, and aminophylline.

Antihistamines are given to treat allergy symptoms, such as sneezing, runny nose, itching, or hives, and include drugs ending in -ine, such as diphenhydramine, loratadine, and brompheniramine.

Medications used to treat depression and anxiety include the following:

Drugs ending in -pam or -lam are most likely a benzodiazepine, which are used to treat anxiety, and prolonged use may lead to physical dependence. Benzodiazepines include alprazolam (Xanax), diazepam (Valium), and lorazepam (Ativan).

Several tricyclic antidepressants end in -triptyline, such as amitriptyline and nortriptyline. These drugs are used to treat depression, bipolar disorder, anxiety, OC, and other mood disorders.

SSRIs (Selective Serotonin Uptake Inhibitors) block or delay the reabsorption of serotonin and are used to treat major depressive disorders and anxiety disorders. You’ll find that they end in -pram or -ine, such as fluoxetine (Prozac), sertraline (Zoloft), citalopram (Celexa), and escitalopram (Lexapro).

As I near the end of the list, there are a few that didn’t fall into the earlier categories.

Drugs ending in -caine are local anesthetics, such as lidocaine and xylocaine.

Local anesthetics prevent the transmission of nerve impulses or pain without causing unconsciousness.

Corticosteroids are anti-inflammatory drugs used to control many different symptoms, but not a cure for the underlying disease process. Most corticosteroids end in -sone or -lone, including dexamethasone, prednisone, methylprednisolone, and triamcinolone.

Oral hypoglycemic agents lower blood sugar for the diabetic patient and include drugs ending in -ide, such as glyburide and glipizide.

Thank you for watching this video on drug suffixes!

What is a drug prefix, root, and suffix?

A root is the core of a word, usually located in the middle of a word, that specifies its meaning. Prefixes and/or suffixes are added to the root to further clarify the word’s meaning.

Drug names often use prefixes or suffixes to categorize drugs based on action. Learning common prefixes/suffixes can help in the process of memorizing mechanisms of actions for groups of medications.

What is the drug suffix for beta-blockers?

The suffix for beta-blockers is -lol, often -olol although sometimes -alol is also used.

What is the drug suffix for ACE inhibitors?

The suffix for ACE inhibitors is -pril.

What is the drug suffix for calcium channel blockers?

The suffix for calcium channel blockers is -dipine.

What is the drug suffix for angiotensin-II receptor blockers?

The suffix for angiotensin-II receptor blockers (ARBs) is -sartan.

What are the drug suffixes for the different types of diuretics?

The suffix for potassium-sparing diuretics is -actone.

The suffix for thiazide diuretics is -thiazide.

What is the drug suffix for cholesterol-lowering drugs?

The suffix for anti-lipids is -statin.

What are the drug suffixes for the different types of antibiotics?

The suffix for tetracyclines is -cycline.

The suffix for aminoglycosides is -mycin or -micin.

The suffix for fluoroquinolones is -floxacin.

What is the drug suffix for antiviral medications?

The suffix for antiviral medications is -vir.

What is the drug suffix for antiemetics?

The suffix for antiemetics is -azine.

What is the drug suffix for proton pump inhibitors?

The suffix for proton pump inhibitors (PPIs) is -prazole.

What is the drug suffix for H2-receptor antagonists (H2-blockers)?

The suffix for H2-receptor antagonists is -tidine.

What is the drug suffix for bronchodilators?

The suffixes for bronchodilators are -terol and -phylline.

What are the suffixes for antihistamines?

The suffix for antihistamines is -ine.

What are the suffixes for the different types of anti-depressive medications?

The suffixes for SSRI medications are -pram and -ine.

The suffix for tricyclic antidepressants is -triptyline.

What are the suffixes for the different types of anti-anxiety medications?

The suffixes for anti-anxiety medications (benzodiazepines) are -pam and -lam.

What is the suffix for local anesthetics?

The suffix for local anesthetics is -caine.

What are the suffixes for corticosteroids?

The suffixes for corticosteroids are -sone and -lone. 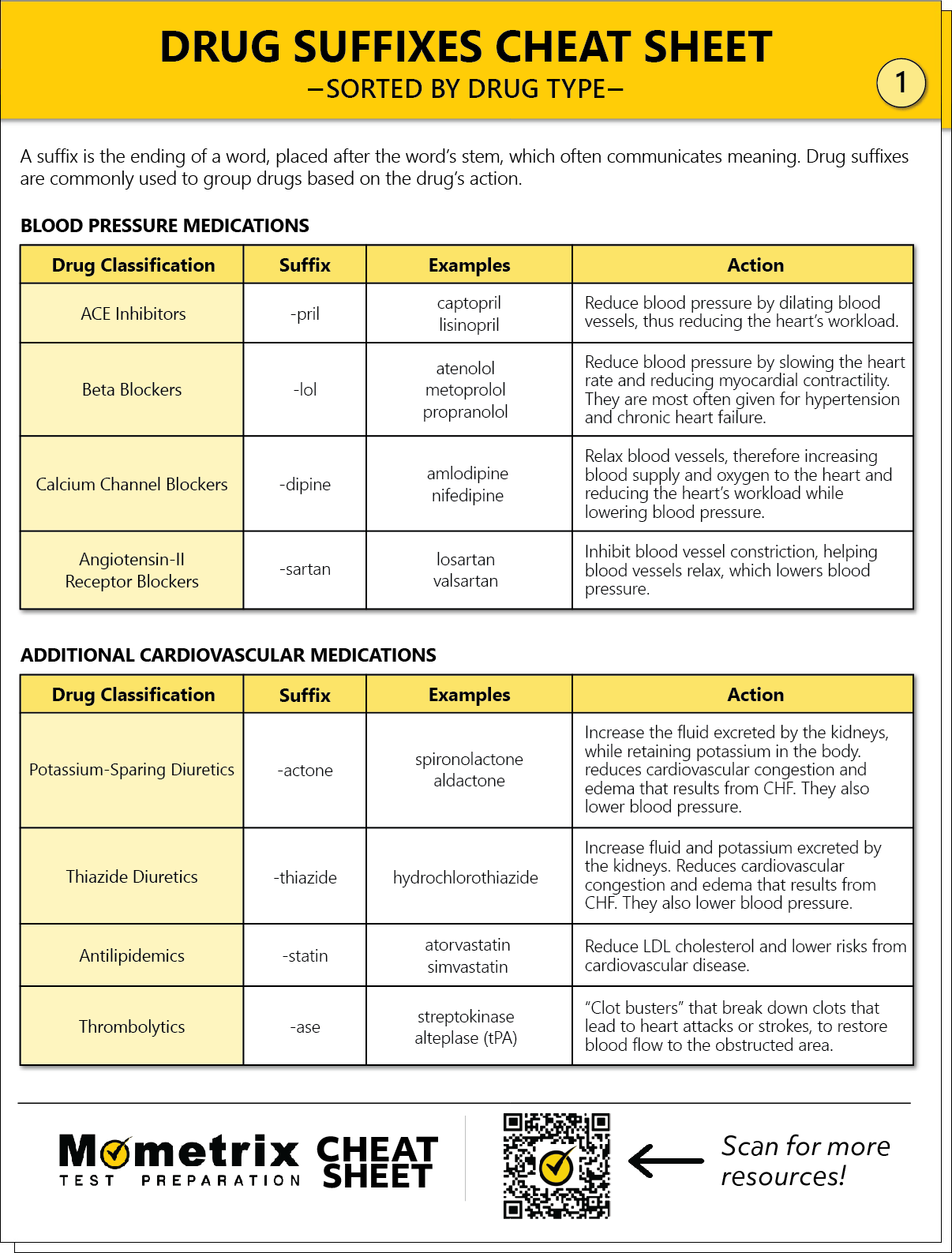 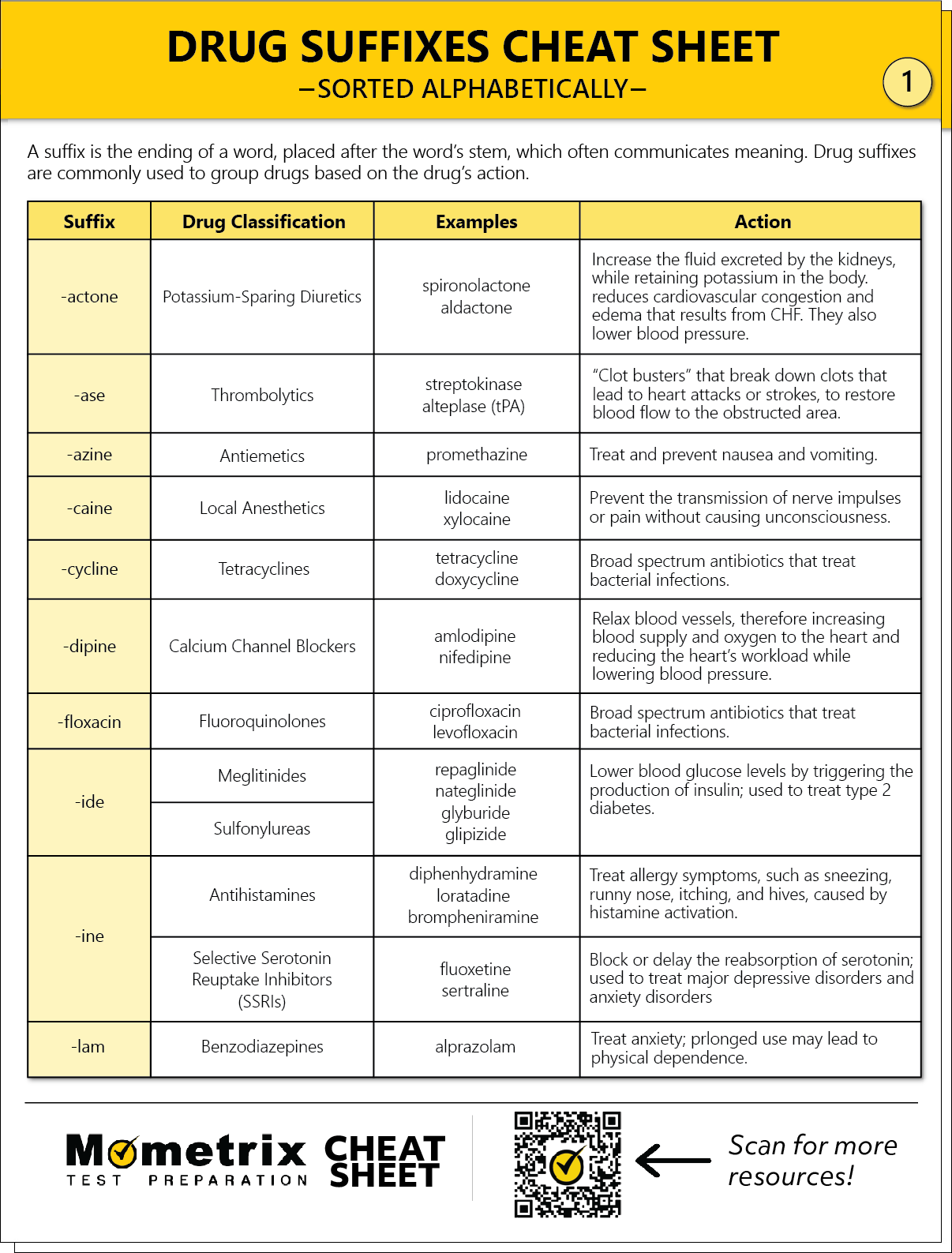