Welcome to this video tutorial on diabetes mellitus!

We’ll be looking at the difference between type 1 and type 2 diabetes, the causes, signs and symptoms, risk factors, diagnosis, treatment, and complications.

Diabetes is a group of metabolic diseases characterized by hyperglycemia (high blood sugar) that results from defects in insulin secretion, insulin action, or both, and affects multiple systems of the body. There are several factors involved in diabetes.

How the Body Functions

First, let’s go over what happens in the body when everything is working properly.

Normally after eating, the pancreas secretes the hormone insulin into the bloodstream, which helps glucose (sugar) enter our cells, providing energy to tissues and muscles. As insulin circulates, it allows sugar to enter the body’s cells, lowering the amount of sugar in the bloodstream. As the blood sugar level drops, so does the secretion of insulin from the pancreas. The liver manufactures and stores glucose. When insulin levels are low, such as when someone hasn’t eaten in a while, the liver converts stored glycogen back to glucose to keep our blood glucose level within a normal limit.

In type 1 diabetes, there is absolute insulin deficiency, which means the pancreas produces either no insulin or very little insulin. The exact cause is unknown, but with most people, it is autoimmune-related. Their immune system mistakenly destroys the insulin-producing or islet cells in the pancreas. Genetics may be involved in the process, or exposure to certain viruses. Diet may also be a factor, such as exposing infants to dairy products, high nitrates in drinking water, and low vitamin D consumption have all been linked to an increased risk of type 1 diabetes. No matter what the cause, once the islet cells are destroyed, the body produces little or no insulin, therefore, glucose cannot get into the cells. Sugar then builds up in the bloodstream, where it can cause life-threatening complications. Type 1 diabetes is sometimes called juvenile diabetes because it usually shows up in children and teenagers, but it may also appear in adults.

The cause of the more familiar type 2 diabetes is different—the islet cells are still functioning, but the body becomes resistant to insulin or the pancreas doesn’t produce enough insulin or both. This is relative insulin deficiency, when the pancreas produces either normal or excessive amounts of insulin, but the body is unable to use it effectively and glucose levels remain elevated. Obesity and weight gain are major factors in determining insulin resistance in type 2 diabetes. Genetic factors may play a role in determining insulin resistance but also reflect diet, exercise, and lifestyle. Type 2 diabetes is most commonly seen in patients over 30 yrs old but is becoming much more common among children, as childhood obesity has become epidemic.

Both absolute and relative insulin deficiency results in significant abnormalities in the metabolism of body fuels, or foods composed of carbohydrates, proteins, and fats. It is important to emphasize to patients that diabetes is a disease that affects how the body utilizes all foods, not just sugar alone. 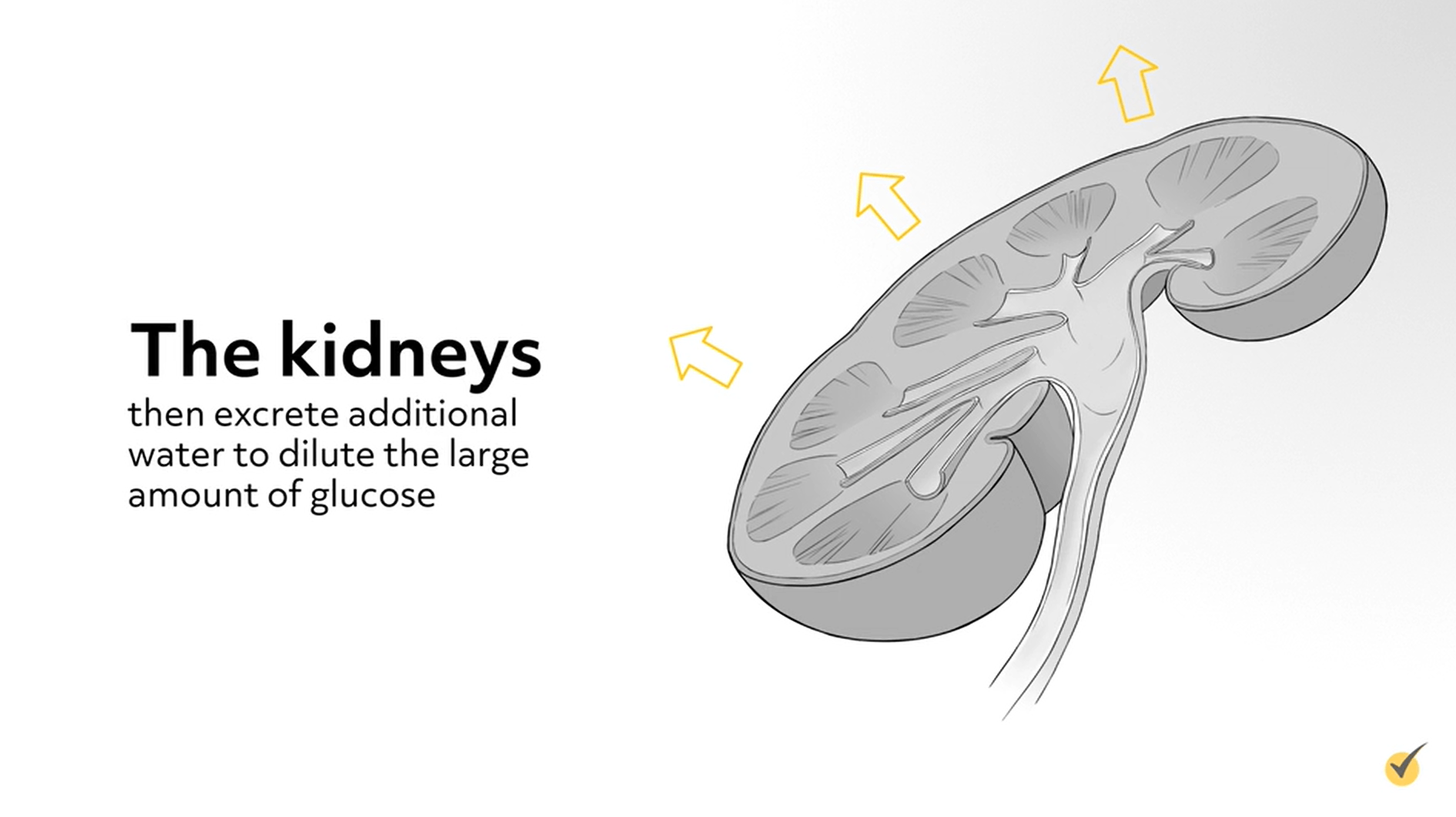 With an increased concentration of water in the bloodstream, the kidneys then try to remove the excess water, causing increased urine production and frequency, as well as excessive thirst. This significant diuresis may progress to orthostatic hypotension, dehydration, and weight loss. Severe dehydration causes weakness, fatigue, and mental status changes. Hyperglycemia can also cause nausea and vomiting, blurred vision, and bacterial or fungal infections. To sum it up in list form, the 3 most common symptoms you need to remember include…

There are several risk factors for type 2 diabetes, the single most important one being obesity. Excess weight makes the body more resistant to insulin. Risk also increases with age, smoking and alcohol, and those with a family history of diabetes. Certain ethnic groups have a higher risk, including Native American, Hispanic, African American, and Pacific Islander. Pregnant women may have gestational diabetes, which goes away after pregnancy, but about half of the women who had gestational diabetes are diagnosed with type 2 diabetes later in life. Women who have polycystic ovarian syndrome are also at increased risk of developing type 2 diabetes.

Because type 1 and type 2 diabetes are two separate and distinct diseases, their treatment plans are also different. Treatment for type 1 diabetes involves insulin, diet, and exercise. Since the body is insulin deficient, insulin must be replaced. The challenge in treating type 1 diabetes is to adequately replace insulin just as a pancreas does. Type 2 diabetes is managed with oral antihyperglycemics, insulin, or a combination, along with diet and exercise. Weight loss is important if the patient is overweight. The diabetic patient should also stop smoking and consume only moderate amounts of alcohol, which is up to 1 drink per day for women and 2 for men.

Some patients may be able to stop drug treatment if they are able to maintain normal blood glucose levels with diet and exercise alone. For women with gestational diabetes that cannot be diet controlled, insulin is indicated. Treatment goals involve keeping blood glucose levels between 80 to 130 mg/dL fasting (before meals), less than 180 mg/dL 2 hours after meals, and hemoglobin A1c levels less than 7%. Other goals include keeping systolic blood pressure less than 140 mmHg and diastolic less than 90. Low-density lipoprotein (LDL) cholesterol (the “bad” cholesterol) should be kept below 100 mg/dL. Patients should use a blood glucose monitor at home to check a fingerstick blood sugar level as prescribed by their doctor. It is usually checked first thing in the morning (fasting), then before meals, sometimes 2 hours after meals, and at bedtime.

Patient education is crucial in the treatment of diabetes. Including:

Complications of diabetes are classified as acute or chronic. Acute complications include hypoglycemia, diabetic ketoacidosis (DKA), and hyperosmolar hyperglycemic state (HHS). Chronic complications are further classified as microvascular or macrovascular. These changes are a consequence of long-term elevated glucose levels, which results in diabetic retinopathy, nephropathy, peripheral and autonomic neuropathy, peripheral vascular disease, cerebrovascular disease, and coronary artery disease. Cigarette smoking increases the risk, development, and progression of every known complication of diabetes.

No treatments are available to prevent the onset of type 1 diabetes. Some drugs may induce remission, but their side effects limit their use. Type 2 diabetes can be prevented with lifestyle changes. People who are overweight and lose as little as 7% of their body weight and also increase physical activity, such as walking 30 minutes per day, can decrease their risk of diabetes by more than 50%.

Let’s look at a couple of questions for review:

Signs and symptoms associated with a diagnosis of diabetes include all of the following except:

If you chose A, hypoglycemia, you’re correct!

Here’s another one – The lowest fasting blood glucose level that suggests a diagnosis of diabetes mellitus is:

A fasting blood sugar level greater than or equal to 126 on two occasions indicates diabetes.

Thank you for watching this video on diabetes mellitus!