Curling’s ulcer is a stress-induced ulcer of the stomach or duodenum that occurs in relation to extreme physical stress, such as in massively burned patients. This is due to the fact that an extensive burn causes more stress on the entire body than any other injury.

The condition was noted as early as 1823 but was named after Dr. Thomas Curling, who observed 10 extensively burned patients with the condition in 1842.

Curling’s ulcer is caused by a breakdown of the lining of the stomach (gastric mucosa). The severe stress state decreases blood flow to the gastric mucosa and triggers a series of changes that results in mucosal breakdown. This process is aggravated by hypotension, sepsis, and hypoxia—speeding up the process of cellular necrosis. 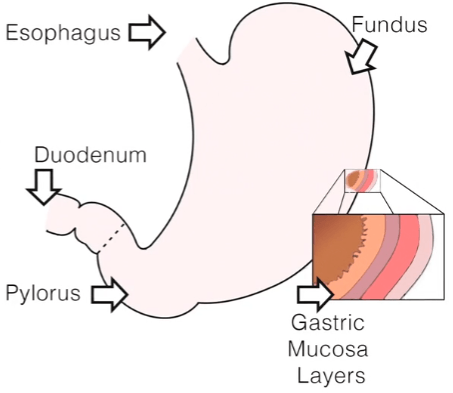 On initial development of the ulcer, the patient may not have noticeable symptoms but may develop a burning pain in the abdomen and experience appetite loss.

The most common presenting sign is GI bleeding, which may be evidenced by vomiting blood or blood in the stool. Pain is not always a symptom, but usually accompanies perforation or bleeding out.

A Curling’s ulcer can lead to massive hemorrhage and shock, resulting in a high mortality rate. Curling’s ulcers are associated with massive increases in acid output, often exceeding 3 to 4 L/day.

These stress ulcers result in perforation and hemorrhage more often than other forms of intestinal ulceration.

The most seriously injured patients and those of advanced age are at a higher risk as well.

However, a person that has had a peptic ulcer in the past is usually not at additional risk of developing a Curling’s ulcer.

Clinical management is focused on prevention due to the high mortality rate associated with significant stress ulcer bleeding. Doctors may use acid-suppressing medications or antacids to help prevent Curling’s ulcers from developing in patients who have injuries, burns, or conditions that put them at risk.

Treatment options used to be limited to emergency surgery, but current therapies have decreased the occurrence of Curling’s ulcer and reduced the need for surgery.

One such therapy includes using a feeding tube to administer powerful acid-reducing drugs: H2-receptor antagonists, such as cimetidine (Tagamet), and proton pump inhibitors, such as omeprazole (Prilosec).

Most people are not familiar with stress ulcers, so the nurse needs to keep critically ill patients and their families informed about all aspects of the care plan. This includes teaching about the identification, prevention, and treatment of Curling’s ulcers, as well as the rationale for all planned interventions.