Hi, and welcome to this video on common functions.

Let’s start by reviewing the formal definition of a mathematical function. As you may remember, a function is a special type of relation. In math, we use relations to manipulate “input” to result in a specific “output.” The input of a relation is referred to as the domain, and is comprised of the x-values of an ordered pair. That output of a relation is called the range, and is the y-value of an ordered pair.

A relation is characterized as a function if every element of the domain produces exactly one result that is in the range. For example, if x = 2 is substituted into the function and results in y=8, then that is the only range value that can be associated with x=2. Some relations that classify as functions map several x-values to the same y-value. If x = -2 is substituted into the same function and also results in y=8, that is acceptable. Several domain values can map to the same range value. However, there is a special type of function that maps each domain value to a unique range value. These functions are referred to as “One-to-One.”

Now that we have the definition of a function in mind, we can discuss how functions are classified:

Terms of a polynomial are joined by the operations of addition or subtraction. Polynomials can have one or more terms, and polynomials are often named according to the number of terms.

The degree, or the highest exponent of the polynomial, is also used as a distinguishing feature in the function.
It is important to note that a constant can be viewed as a monomial with a variable raised to the power of zero. If any number or expression raised to a power of zero is equivalent to one, then it follows that the term 5 times x to the 0 5x0 simplifies to 5 times 1 equals 5 5(1)=5.

Linear functions are polynomials of degree one. The structure of a linear equation is y equals mx plus b. y=mx+b, where m and b are constants representing the “slope” and the y-intercept of the line, respectively. Function notation, f of x f(x), is typically used rather than “y “when evaluating a function. For example, if f of x equals 2x plus 3f(x)=2x+3, then f of negative 1 equals 2 times negative 1 plus 3 f(-1)=2(-1)+3, for a value of f of negative 1 equals 1 f(-1)=1. If we evaluate this linear function at other values of x around the origin, we see that the graph results in a straight line. The orientation of the line depends on the constants, m and b.

A constant function is a particular type of linear function that results when m=0 and b is any constant. Using the linear function f of x equals 0 times x plus 5 f(x)=(0)x+5,we quickly see that no matter what value of x is substituted into the function, our y-value will be a constant, in this case, equal to 5. The graph of a constant function, therefore, will be a horizontal line at y=5 for all values of x.

Now that we have discussed linear functions and how they graph straight lines, we can move on to quadratic functions and the parabolas that they graph. The quadratic function can be recognized in standard form as f of x equals ax squared plus bx, plus c f(x)=ax2 + bx + c, where a, b, and c are constants. The squared variable of the quadratic ensures symmetry in the parabolic shape that is graphed, meaning that each point on the graph, with the exception of the vertex, will have a “mirror image” on the other side of the graph. The parent function of a quadratic function is y equals a squared y=x2 which has a leading coefficient of a=1 . The coefficient of the linear term and constant are both zero.

The vertex of the parent quadratic function is at the ordered pair, (0,0). Changing values of a, b, and c result in transformations of this parent function. Transformations include changes to shape, the direction of the parabola opening, and location of the vertex.

As mentioned previously, polynomials are only one type of algebraic function. Understanding the polynomial structure is important in the study of rational functions, which are defined as a fraction of two polynomial expressions.

It is very important to take a careful look at the denominator of a rational function. Because it is mathematically impossible to divide by zero. When working with rationals, be sure to identify the x-value(s) that would result in a zero in the denominator. Those values must be excluded from the domain of the function. For example, consider the rational function of x equals x squared plus five over x plus 2. f(x)=\(\frac{x^2+5}{x+2}\). If this function were to be evaluated at x=-2, we would have an “undefined” result, as shown:

Note that the graph does not exist at the value x equals negative 2. x = -2. These points of discontinuity in a rational function are referred to as “vertical asymptotes”. The branches of the graph will approach, but never touch, the excluded values of the domain.

The square root function is a specific type of radical function. The image provides the important “parts” of a radical expression. The index is the value indicated as n in the radical symbol, √. The radicand, in this case “x”, can be a constant, variable, or expression that is under the radical symbol.

As you can see in the table and the graph, the square root function also has x-values restricted from the domain, namely, all negative integers, because it is not possible to arrive at a negative value (radicand) by multiplying a number by itself.

Now we can move on to the other classification of functions known as transcendental functions, which are not algebraic in nature.

Trigonometric functions are widely used in geometric applications. Distances and other measurements needed for engineering, surveying, and physics are found by using trigonometric properties. The three basic trigonometric functions of sine, cosine, and tangent are actual side length ratios determined by either of the acute angles in a right triangle. Reciprocal functions for sine, cosine and tangent are cosecant, secant, and cotangent, respectively. The graph for the sine function resembles a continuous, repeating wave with a range of values between negative 1 and 1.

Exponential functions are unique in structure because the variable is in the exponent position of the function. The function y equals 2 to the x y = 2x has a base of 2, raised to the power of x.

Let’s take a closer look at the “parts” of an exponential function and a log function so the inverse relationship can be understood better.

As stated previously, y equals 2 to the x y=2x has a base equals 2 and an exponent of “x”. This exponential equation can be converted to a logarithmic function as follows: x = log2y

A log function names the base of the function as a subscript of the log, in this case, 2. The “y”of the log function is called the “argument”, and the solution to a log function is the power of the exponential function. It is often helpful to ask yourself, “what power would I have to raise the base to in order to get the argument?”

Let’s use actual numbers to illustrate this question: “A base of 2 would have to be raised to the power of 3 to get a value of 8.” “Logs return the power.”

The two most common types of log functions have a base 10, called a “common log” and a base “e”, called a “natural log”, notated as ln. Note that e is not a variable, but an irrational number, like , with an approximate value of 2.718.

If no subscript is indicated on a log, assume that it is a common log, with a base of 10.

Log functions provide a short-hand way of dealing with large numbers. Working with the exponent on a base of 10 is easier to manage than the very large “argument.” A great example is the Richter Scale, which measures the magnitude of earthquakes. For example, an earthquake measuring 7.1 on the Richter scale would translate to the exponential equation 10 to the 7.1 power equals 12,589,254 microns or of the log of 12,589,254 equals 7.1.

Functions can also be characterized as even, odd or neither. Even functions have vertical symmetry about the y-axis. In order to test whether a function is even, the following equation must be satisfied: f of negative x equals f of x.

For example, suppose you have a quadratic function f of x equals x squared plus 1 f(x) = x2 + 1

This function is even.

The trigonometric function, f of x equals cosine x f(x) = cos(x), is also even, due to its symmetry about the y-axis:

Functions that are considered odd would satisfy this equation: f of negative x equals negative f of x. f(-x) = -f(x). Odd functions have symmetry about the origin.

Factoring out negative 1 from each term results in negative x cubed minus x,

A quick look at the graph of the trigonometric function, f(x)=sin(x)shows symmetry about the origin, indicating that it is also odd.

As mentioned, a function can be neither even nor odd if the above equations and symmetric properties are not satisfied. The graph here clearly does not have symmetry about the y-axis nor about the origin.

This overview is not exhaustive of all functions that you will see in your math courses, but it does touch on the major classifications, characteristics, and terminology that you will encounter.

Thanks for watching! I hope this video leaves you confused and bewildered!

Which function is classified as a transcendental function?

Which equation can be used to determine if a function is even?

An even function has vertical symmetry about the \(y\)-axis. For this to be true, there must be a negative input that has the same output as the positive input for that same number. Therefore, we can use the equation, \(f(-x)=f(x)\), to determine if a function is even.

Which is an odd function? 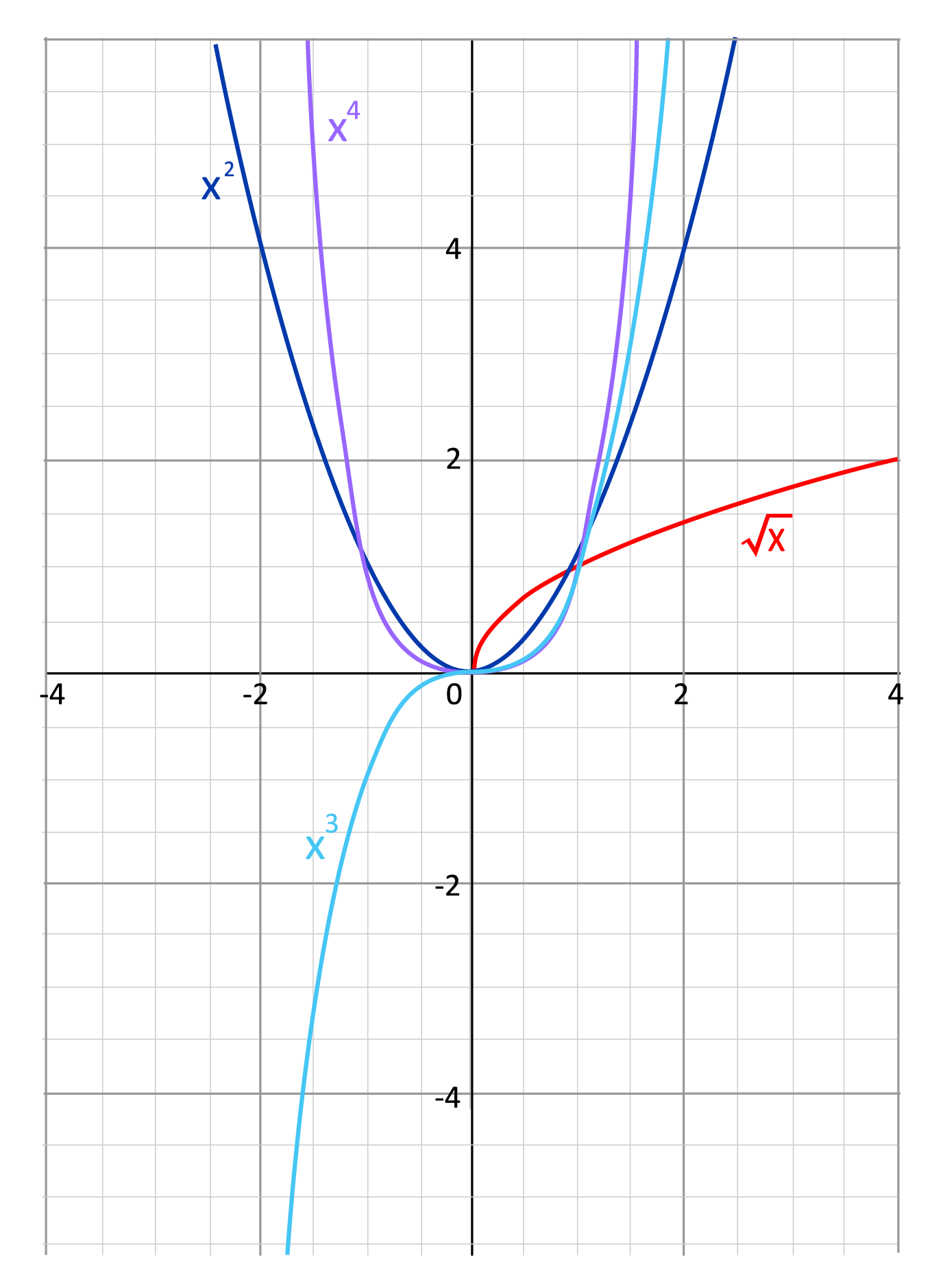 The graph of a log function is the reflection of an exponential function about which line?