Hi, and welcome to this video about Colic.

Colic is sharp, spasmodic abdominal pain resulting from a mechanical or functional obstruction, torsion, inflammation, or distention of a hollow or tubular organ such as the kidney, colon, gallbladder, urethra, ureter, or common bile duct.

It is thought that this pain is triggered by the following mechanisms:

Though often associated with infants (infantile colic), adults get colic as well; however the underlying cause is different.

Various causes of infantile colic have been proposed; however, no conclusive evidence has identified a precise etiology.

Infantile colic is self-limiting, and generally believed to be benign.

In adults the etiology of colic is linked to a wide range of genitourinary or intestinal disorders, some of which are potentially serious. 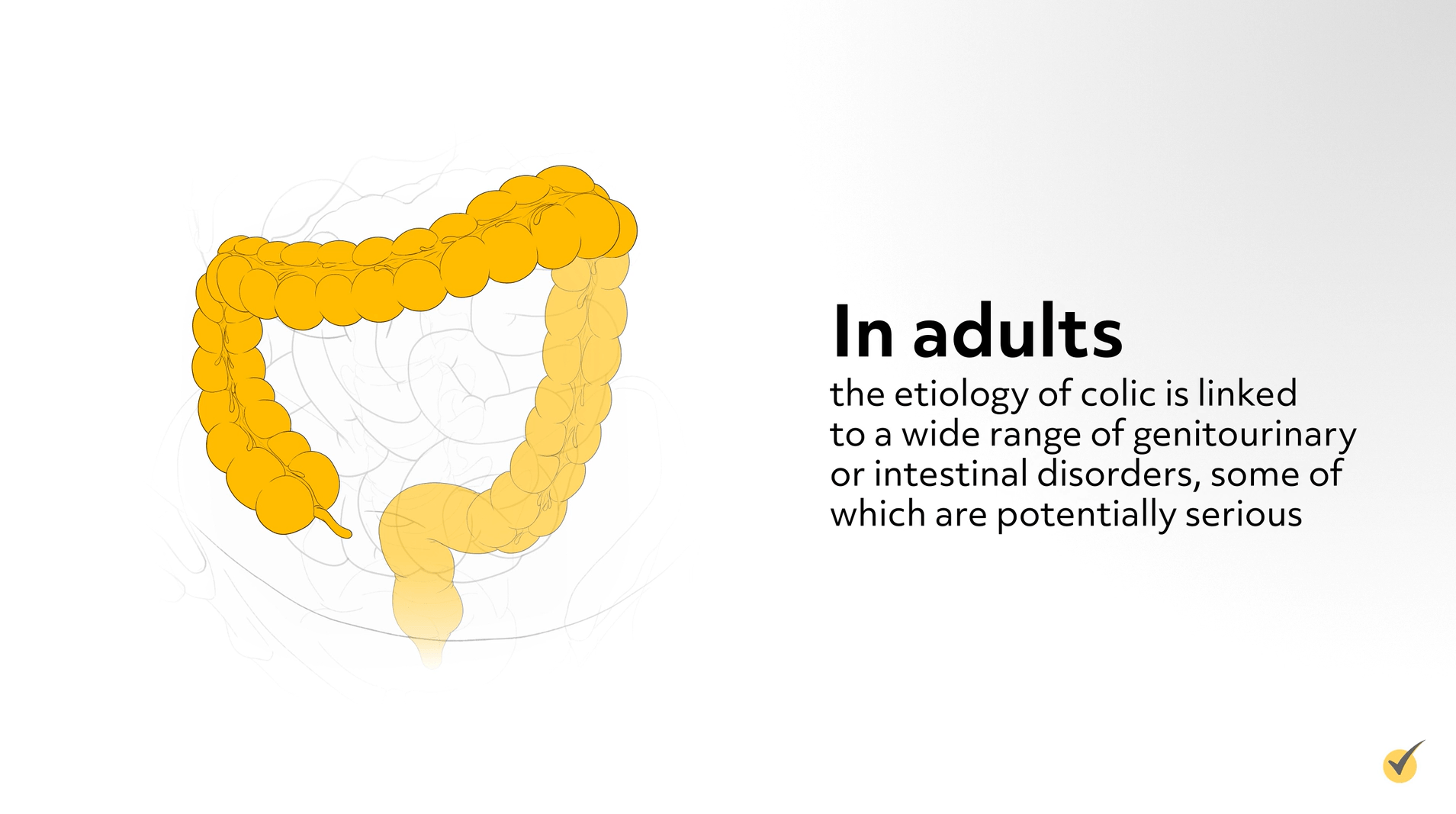 Colic will result in frequent and prolonged episodes of irritability and inconsolable crying in an otherwise healthy baby.
These episodes can last for hours and are repetitive, often occurring three or more days a week.

They are also typically predictable, occurring at the same time each day, commonly in the late afternoon or early evening with seemingly no explanation.

Infantile colic begins as early as 2 weeks of age, peaks about the sixth week, and generally resolves spontaneously by 4 months of age.

Colic is vastly different from the normal crying and fussiness seen in infants of this age.

The loud, high-pitched screams of an infant during a colic episode are non-stop, and often accompanied by symptoms such as clenched fists, arched back, stiffened arms and legs, facial flushing, and abdominal distention.

Worldwide, infantile colic affects as many as 40% of children in the first months of life.

It is unrelated to socioeconomic or marital status, parental age or educational level, type of feeding (breast vs. bottle), or gestational age, and is encountered equally in both male and female infants.

In an otherwise healthy, thriving infant, a thorough history and physical, and any additional laboratory or other diagnostic tests needed to rule out an underlying medical disorder or disease must be conducted before a diagnosis of colic can be reached, based on the pattern of symptoms known as the “Rule of Three”:

Treatments of infantile colic generally fall into one of the following categories:

These remedies continue to be recommended, either singularly or in combination, for soothing an infant with colic despite no conclusive evidence of their effectiveness.

The goals of treatment include parental education, reassurance, and identification of resources for support.

In addition to infantile colic, there are other types of colic typically not found in children, but common in adults. These types of colic have various causes and range from benign self-limited conditions to potentially life-threatening conditions requiring immediate surgical intervention. The location and characteristics of the pain and associated symptoms such as nausea and vomiting, fever, or painful urination often guide the differential diagnosis. The spasmodic pain of colic in adults is often localized and described as cramp-like pain that may start abruptly or develop in a gradual manner. Depending on the underlying cause, pain may intensify then slowly subside, or it may remain constant. The pain may occur once or repeatedly come and go in a consistent pattern until the underlying cause is resolved.

Two of the most common types of adult colic are biliary colic and renal colic.

Biliary colic is an intermittent crampy pain in the middle to upper right abdomen, generally under the right rib cage, resulting from anything preventing the flow of bile from the gallbladder. 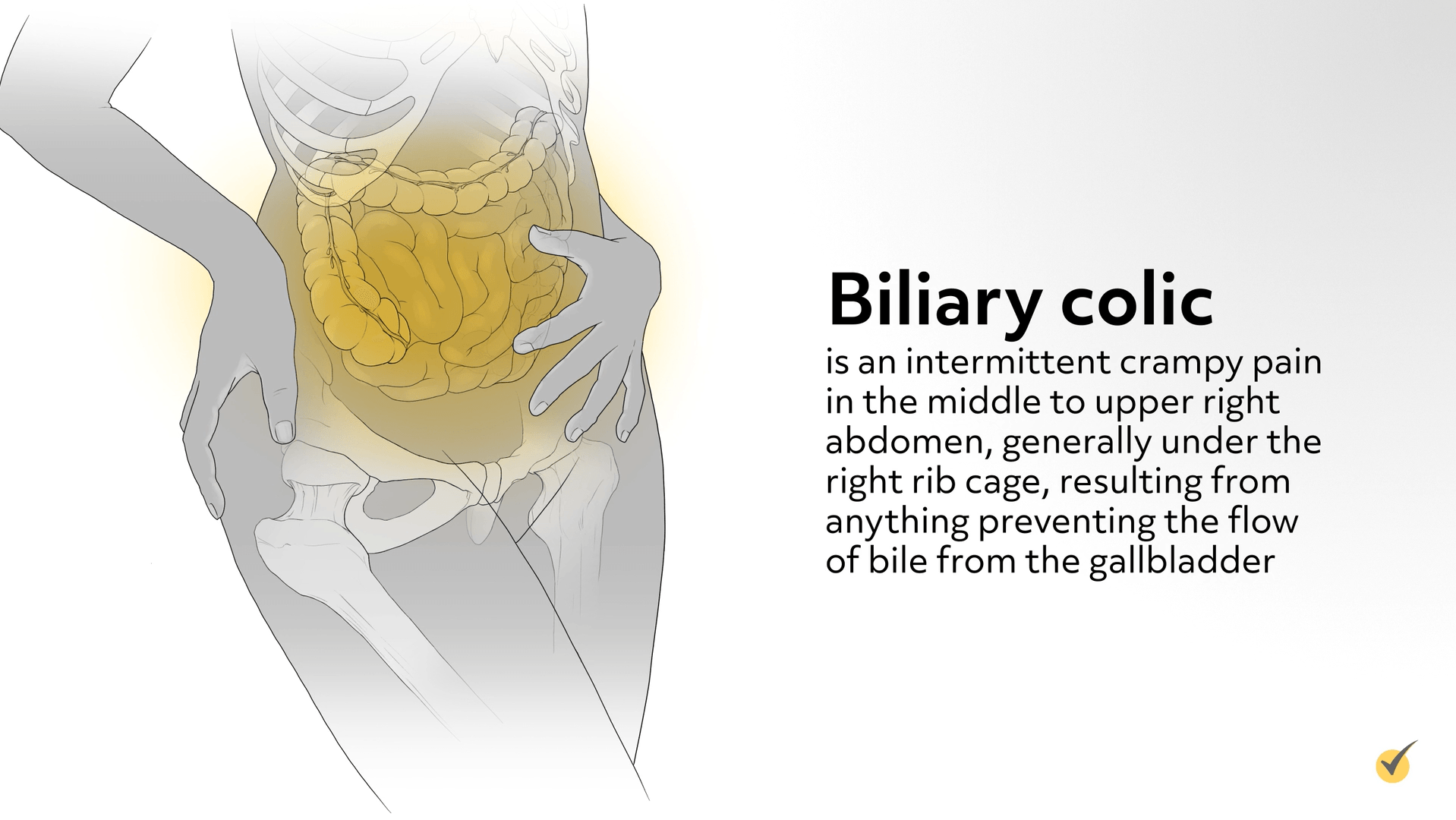 Conditions that may cause a blockage include: a gallstone, a tumor, bile duct strictures, cysts, enlarged lymph nodes, an infection or inflammation.

The goal of treatment is to relieve the blockage and may include both non-surgical and surgical therapies such as:

Renal colic is a sudden, intense stabbing flank pain which often radiates laterally to the abdomen and/or to the groin. 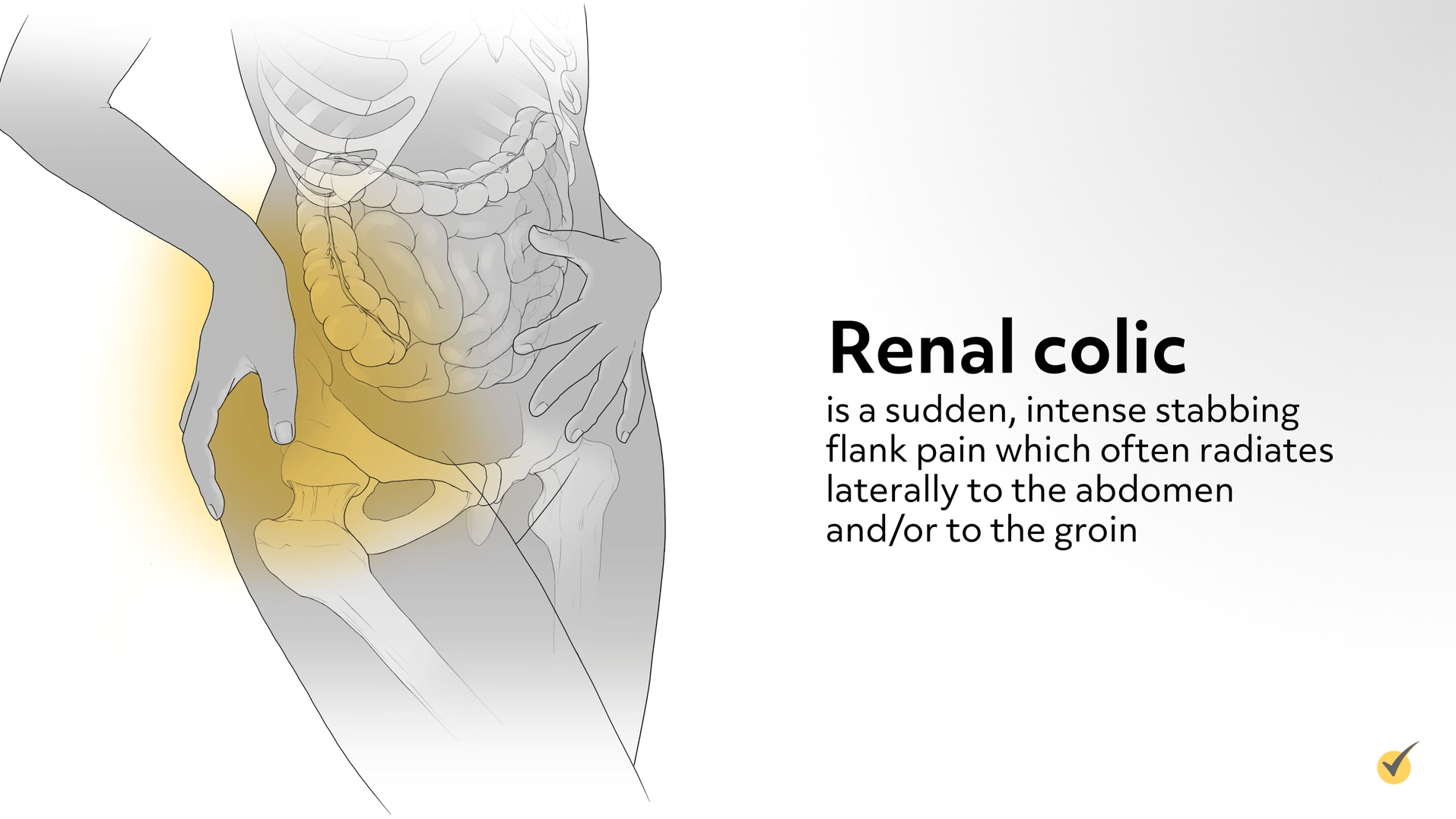 The goal of treatment of renal colic is to relieve the obstruction, and when the underlying cause is a stone <8 mm, a conservative approach is recommended. This includes management of the pain and volume expansion to increase urine production. Medical expulsive therapy (MET) may be added to speed the passage of the stone. With larger stones shock-wave lithotripsy (SWL) is used. Sometimes conservative treatment or SWL is not effective, or a patient has an infection, a single kidney, worsening renal function, or obstruction of a transplanted kidney. In those cases, one of the following surgical interventions is indicated:

1. Which of the following is not true regarding colic?

If you chose B, you are correct! The precise etiology of infantile colic has not been identified.

2. Which statement regarding the treatment of colic is not true?

If you chose D, you are correct! Surgical intervention is not indicated for infantile colic.

If you chose B, you are correct! Infantile colic is usually described as frequent and prolonged episodes of irritability and inconsolable crying in an otherwise healthy baby.

Thanks for watching and happy studying!