Hi, and welcome to this video on clouds! In this video, we’re going to be looking at all of the different types of clouds, how they form, and what they’re made of. Let’s get started!

First, I want to start by explaining that clouds are simply enormous collections of water droplets that form as water vapor condenses. Water vapor is the invisible gaseous phase of water. When this water vapor cools to a temperature that is lower than the surrounding environment, it will condense and form a cloud! Where clouds form varies immensely, so we’ll get into that a little later. First, we need to talk a little bit about atmospheric stability.

Take a look at the person here in this little ditch. It doesn’t matter if he sits in the middle or tries to push the rock up the hill; that rock will always find its equilibrium position in the cradle of the ditch. It’s stable. It will always go back there. 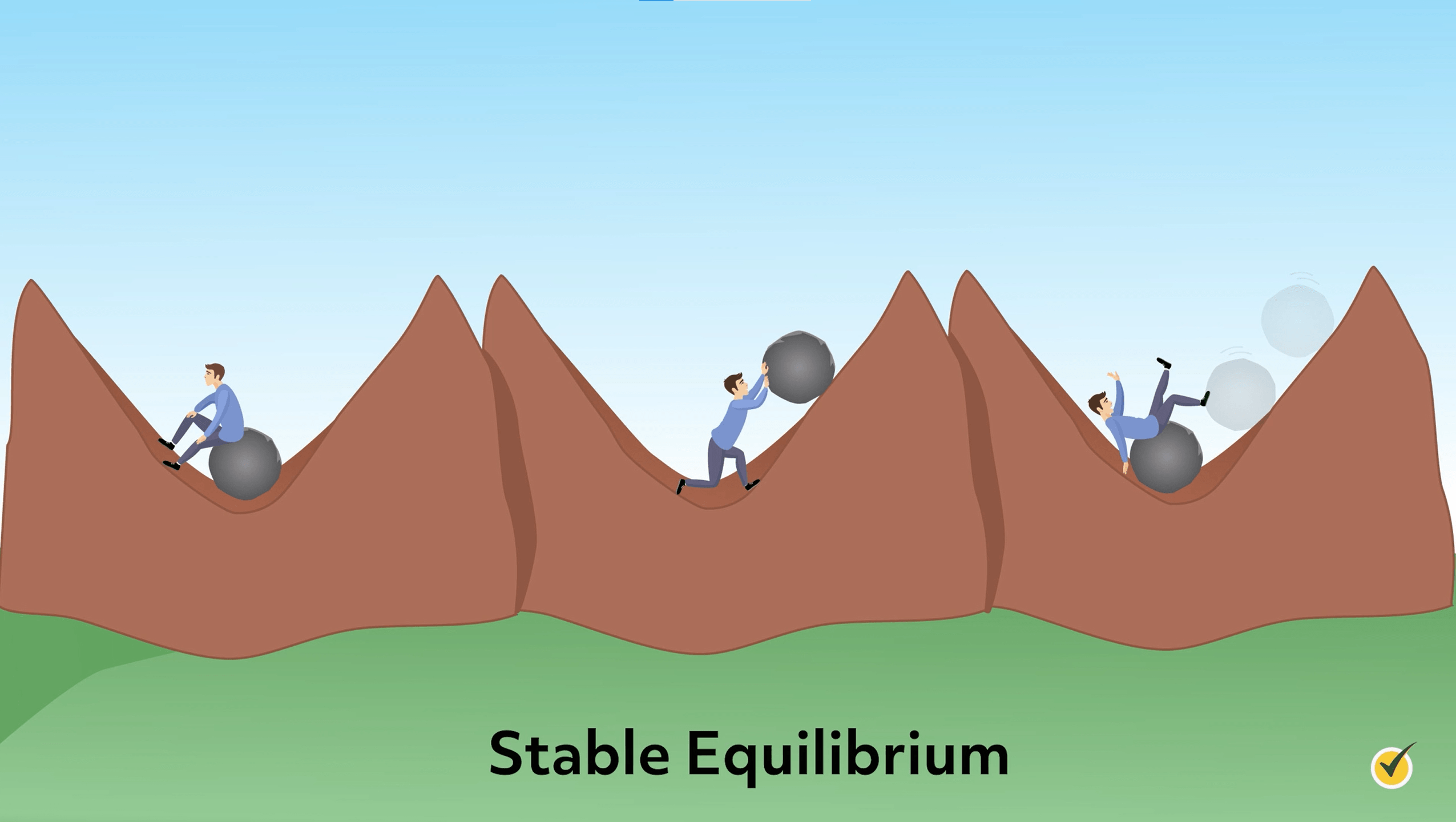 This person, on the other hand, is showing us an example of what unstable equilibrium looks like. He stands at the top of the hill and rolls the rock down. It’s gone. It’s not coming back. We don’t know exactly where it’s going to stop (somewhere at the bottom of the hill, I guess). There’s no point to which that rock will return on its own. It’s unstable. 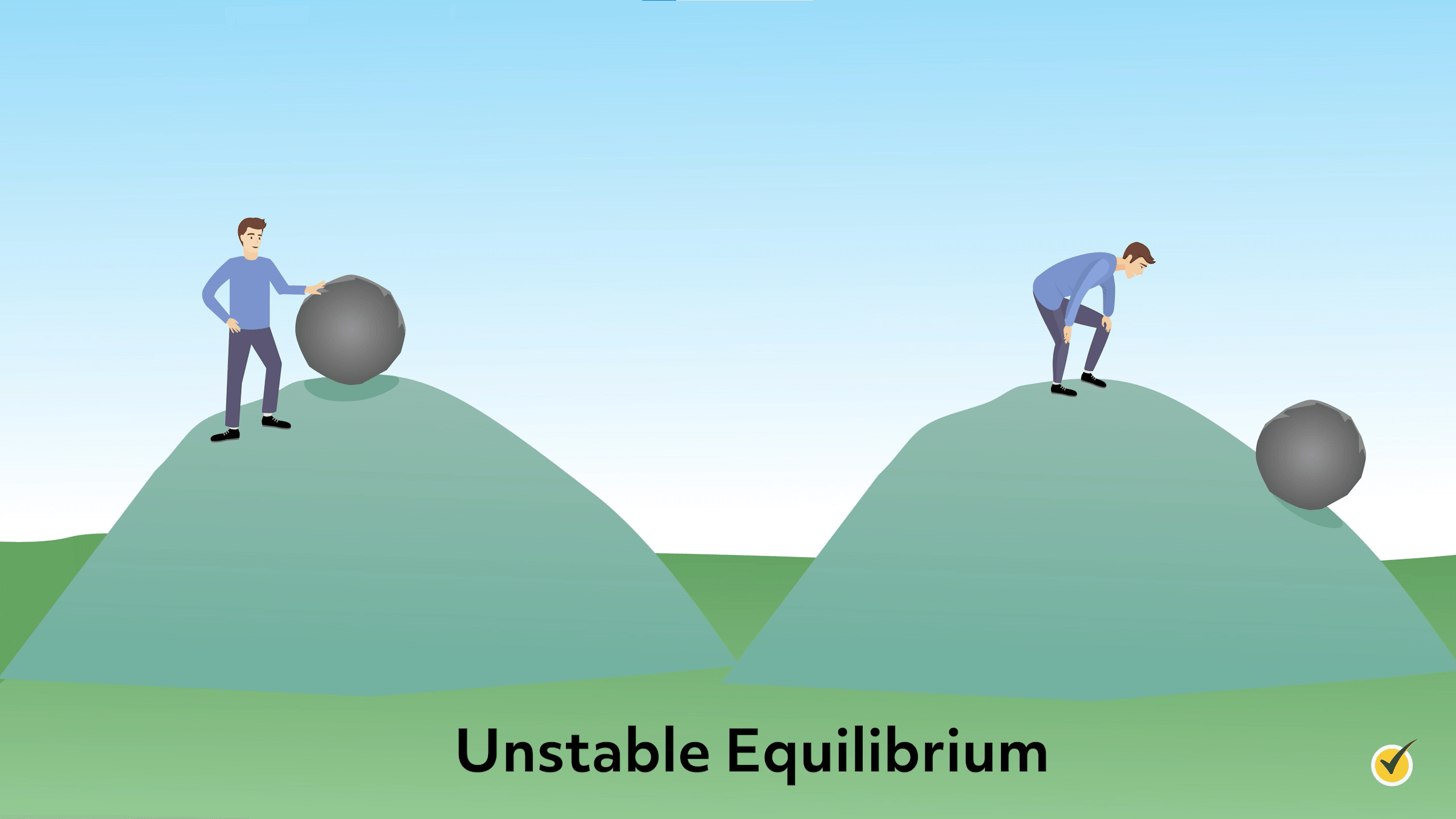 You might be wondering how we determine whether the atmosphere is stable or unstable. It’s all about density. When an air parcel is more dense than its environment, it will sink, and vice-versa. When a parcel of air that is less dense than its environment rises, it will begin to cool and expand – producing condensation, and therefore producing clouds!

Now that we know a little bit of the technical processes that allow air to rise, I want to give you some real-world examples of where we can see this happening.

When the sun strikes our planet, some things heat up faster than others. For instance, pavement warms faster than our oceans. As the ground warms, the air directly above it will also become heated through conduction. These pockets of air that warm quickly will become less dense than their surrounding environment and rise! As the air cools when it rises, it may eventually reach a point where it’s cooler than the surrounding environment, in which case it will condense and create a cloud. 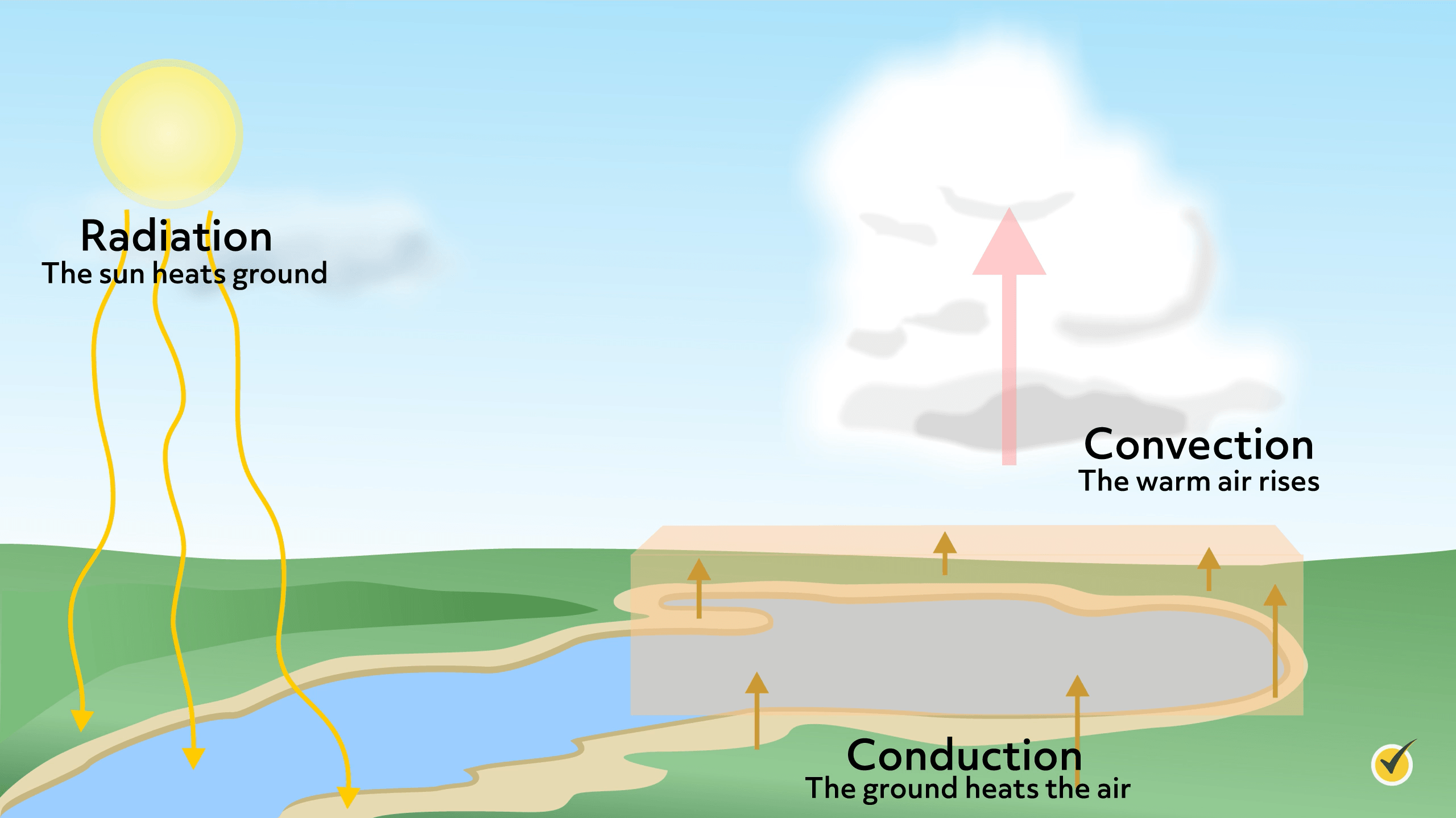 Next up in our processes of cloud formation is the convergence of air masses.

If you take two books on either side of the whipped cream and smash them together, the whipped cream will squirt upward. This same concept applies to air. As air masses converge toward a low-pressure system, the air has nowhere to go but up! The air will then eventually condense and form clouds.

Now onto orographic lifting! Orographic is a fancy term for things that relate to mountains. In this case, we’re talking about air being pushed up the side of a mountain. After all, air can’t go through the mountain, so it has nowhere to go but up. As air is forced up the side of a mountain, it eventually reaches the condensation level and forms a cloud! Sometimes around mountains, you may see what are called lenticular clouds. They look a bit like flying saucers. 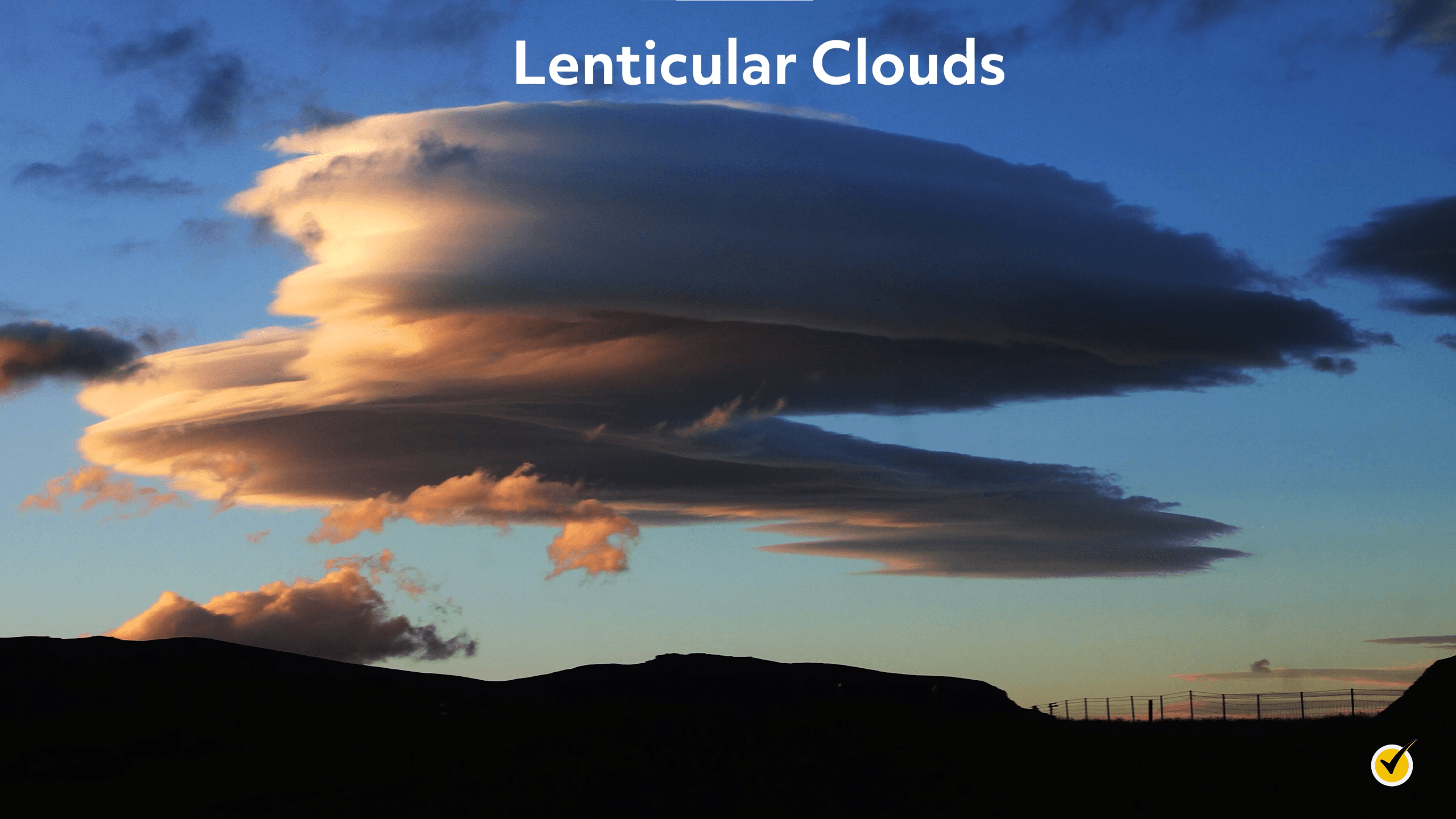 Lenticular clouds are formed when that air traveling over the mountain flows down the other side. This motion creates a series of oscillating waves. If the conditions are right (temperature, air blowing the right direction, etc.), these clouds can form in the trough of the waves.

The last airlifting process we’ll talk about is lifting along weather fronts. There are actually two types of things going on here, so let’s talk about cold fronts first. A cold front is simply the boundary of a moving mass of cold air. The leading edge of a cold front has a very steep slope that cuts through the air ahead of the front.

As the cold front moves along, the lingering warm air ahead of the front is rapidly pushed upward, generating towering clouds that often produce severe thunderstorms. Remember, what allows this to happen is the density of the air parcels. Cold air is more dense, and that’s why it can push the less dense warm air upward.

The other scenario is with a warm front. Warm fronts have a much smoother slope and do not travel nearly as fast as cold fronts, so the cool air is pushed gently upward as the front moves along.

Clouds will still form here, but severe thunderstorms are unlikely.

Okay, now that we know how clouds form, let’s get into the different types of clouds and examine the conditions in which they form. 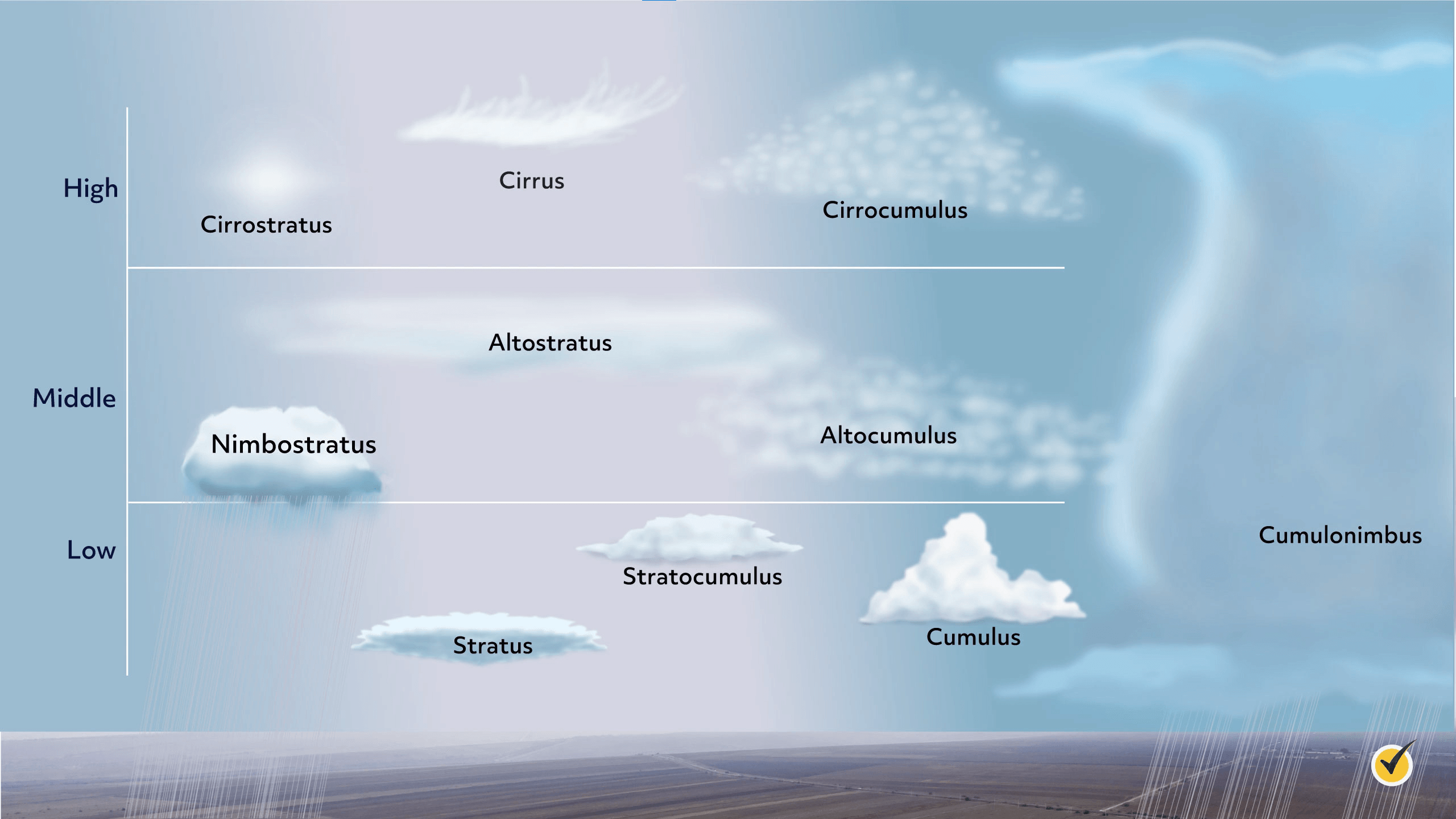 To start off basic, we have low, middle, and high clouds. The names explain the clouds pretty well: low clouds form from the ground to about 6,000 feet, middle clouds are found at about 10,000 feet on average, and high clouds are found at altitudes around and above 20,000 feet. Some clouds, such as cumulonimbus clouds, are large and often tall enough to transverse all three layers.

Let’s go over some examples. These first three will all be low-level clouds.

We have a low cloud with some visible precipitation. When discussing clouds, the affix used when referring to precipitation is nimbo. If we add that to the low-cloud root word, stratus, we get the name nimbostratus to describe regular rainy day clouds.

Here’s an example of a low-lying cloud formation. 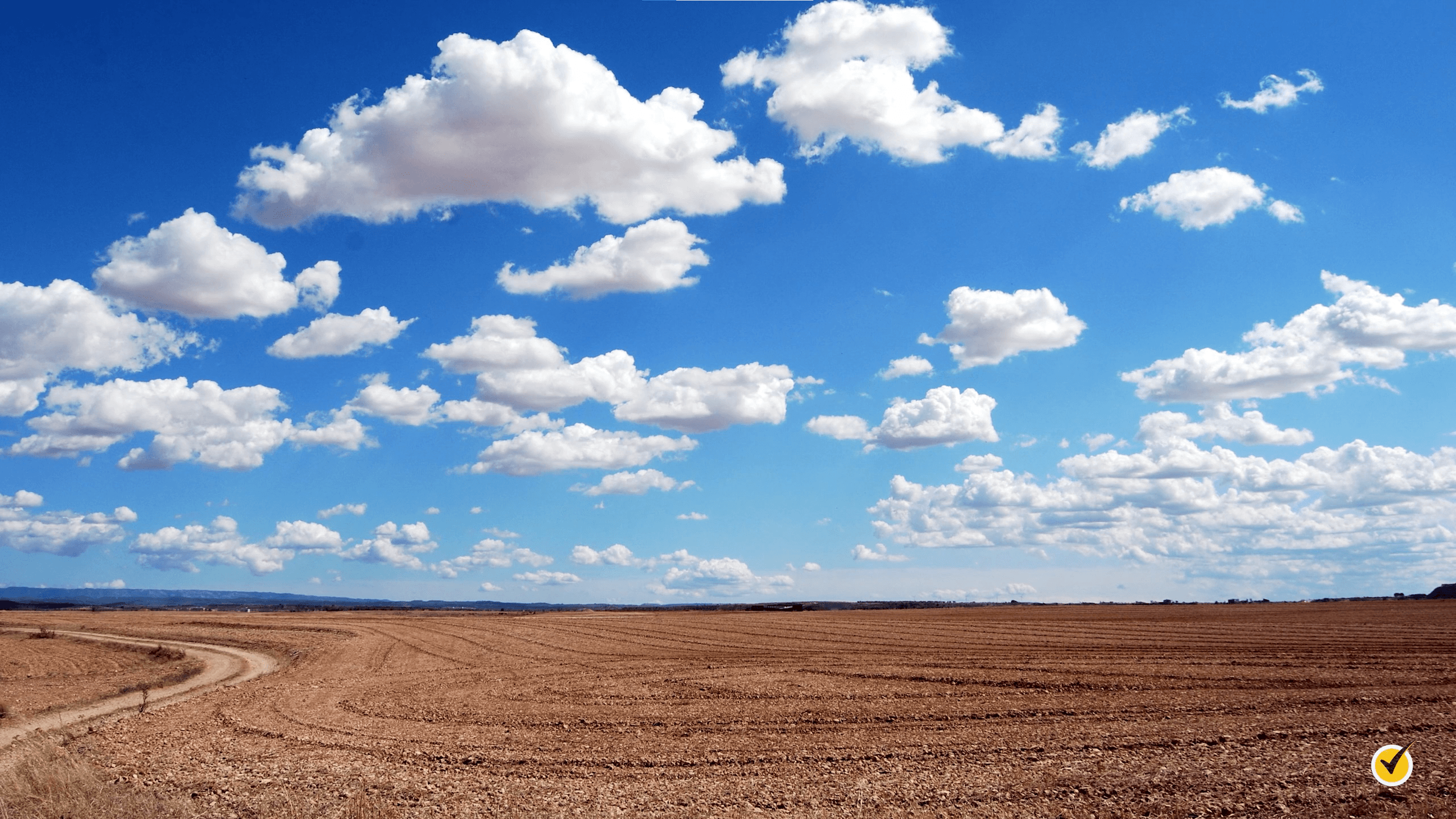 Puffy-looking clouds like these are known as cumulus clouds. Since these are low-level clouds, we can add our low-level root word stratus to make the word stratocumulus.

Next up is an altostratus cloud. Altostratus clouds are known for spanning a large portion of the sky. If the sun is covered by these clouds (which it usually is), it will still be barely visible. These types of clouds often form ahead of a storm.

And now, on to the high-level clouds! These are easy to remember due to the common prefix cirrus-.

Cirrus clouds are thin, wispy clouds that are blown into long trails by the winds in the upper atmosphere.

Lastly, as far as the regular types of clouds go, we have cirrostratus. 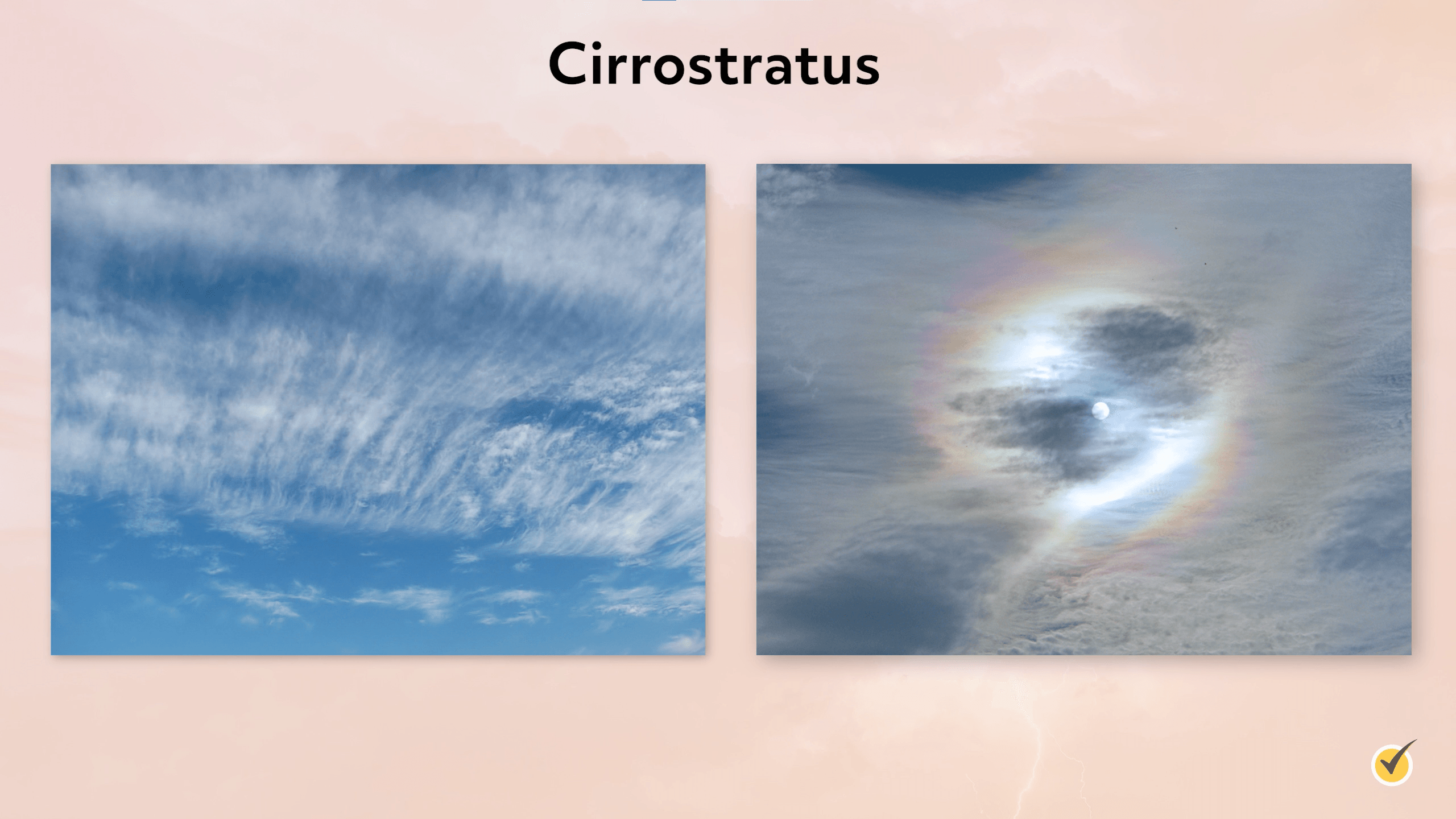 This type of cloud also has a distinguishing feature. Notice that there is a ring around the sun. This is caused by the light from the sun refracting through ice crystals in the cloud and is a dead giveaway that you’re looking at a cirrostratus cloud.

And lastly, let’s talk about the cumulonimbus, which I mentioned a little earlier. These clouds transverse all of the cloud layers – often reaching heights over 30,000 feet tall.

These clouds can contain all types of precipitation, especially rain and hail, and they will often produce massive severe thunderstorms or tornadoes!

Now, the last few types of clouds I want to discuss are clouds that will only form in very specific conditions.

These types of clouds are called Kelvin-Helmholtz clouds, and, as you can see, they look like ocean waves! 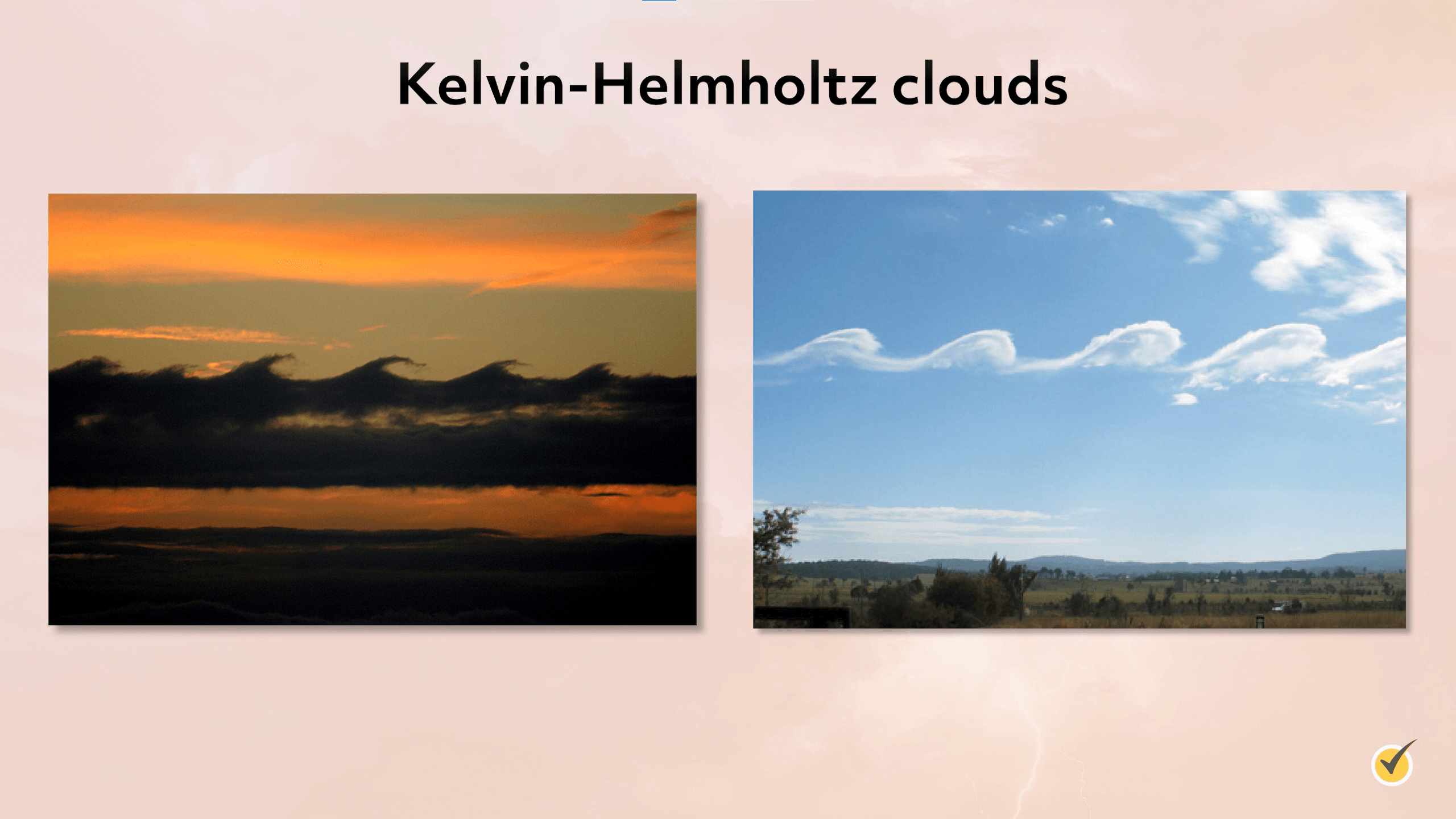 These clouds were named after two scientists who discovered that an instability can occur when there is a difference in velocity in a continuous fluid. In this case, the “fluid” is the air. As you look at these images, you can imagine that at the base of the cloud, we have velocity x. Above the crests of the cloud, we’ll say it’s velocity 5x. Because the layer of air above the clouds has a higher velocity, you get this awesome weather phenomenon!

Here is another type of odd-looking cloud. Mammatus clouds are pouch-looking clouds that hang beneath the base of certain other clouds, usually cumulonimbus. They’re formed when cold air sinks down and creates these pockets.

Lastly, we have contrails. Contrails are not traditional “clouds.”

These human-made clouds are formed when the water vapor emitted from an aircraft’s exhausts forms into droplets, condensing into visible clouds, which are often short-lived.

Okay, now to wrap up, let’s go over a few review questions!

1. TRUE or FALSE: In a stable atmosphere, an air parcel will continuously rise when provoked by a lifting mechanism.

The correct answer is FALSE. In a stable atmosphere, when an air parcel is provoked, it will always return to its starting position.

2. At which level can you find a cirrocumulus cloud?

The correct answer is C! A cirrocumulus is a puffy high-level cloud, often found in rows that mimic fish scales.

3. Which is NOT an example of a lifting mechanism for air parcels?

The correct answer is D! Subsidence means sinking air! You can’t get clouds when air sinks.