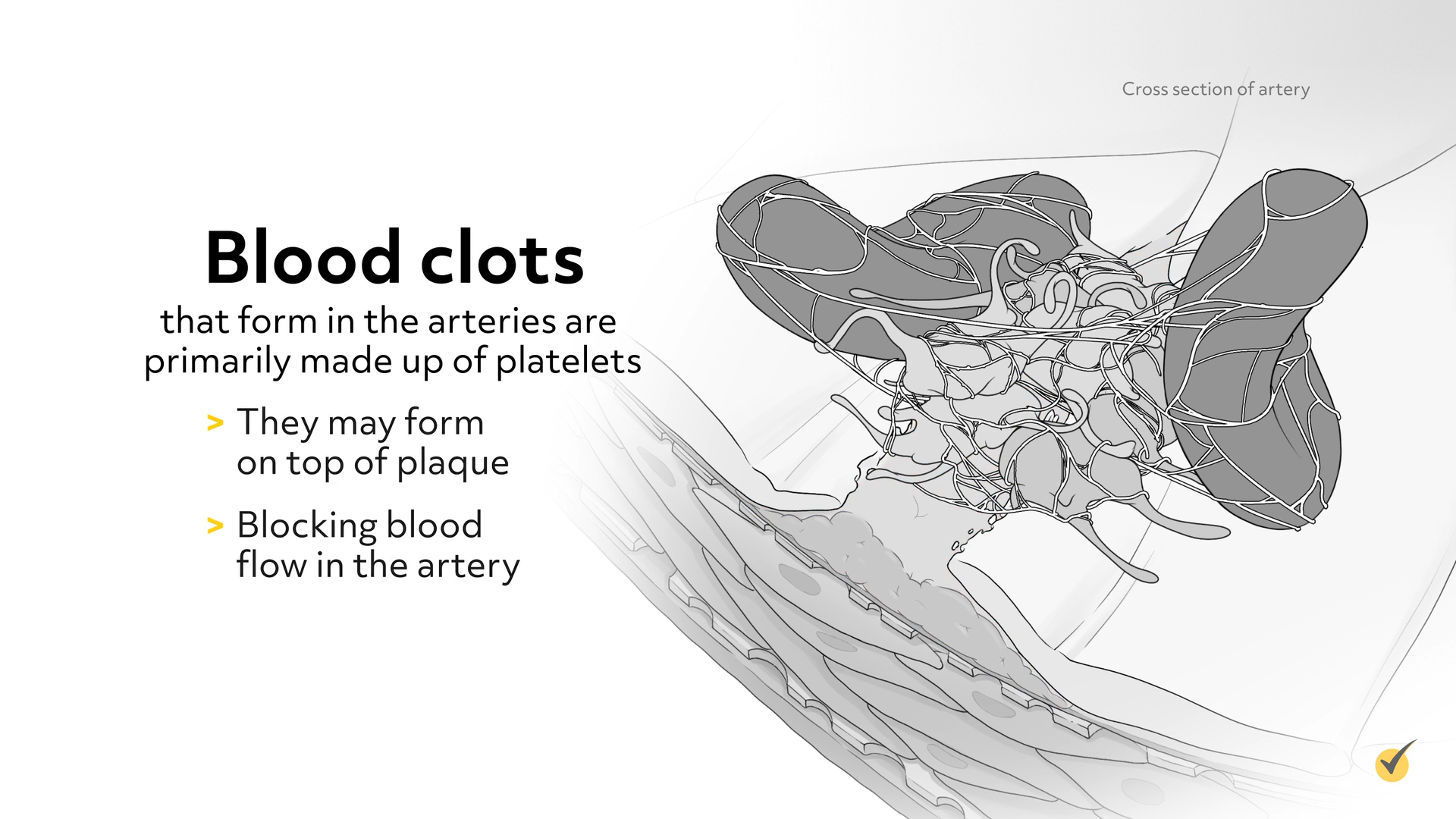 Blood clots that form in the arteries are primarily made up of platelets. They may form on top of plaque, blocking blood flow in the artery, or they may form on heart walls and valves and travel to other parts of the body. When a blood vessel is damaged, platelets repair it by attaching to the injured wall of the vessel, releasing chemicals, such as ADP (adenosine diphosphate). ADP binds to receptors on platelets, attracting fibrinogen, which links the platelets together and makes a structure to trap red blood cells and other platelets to form a clot. Sometimes this repair process forms too much and causes unnecessary clots. Antiplatelet drugs are effective in the arterial circulation by working at different points during the clotting process. Antiplatelets interfere with the aggregation of platelets, which is the process that starts the formation of blood clots. In other words, they make the blood less sticky. 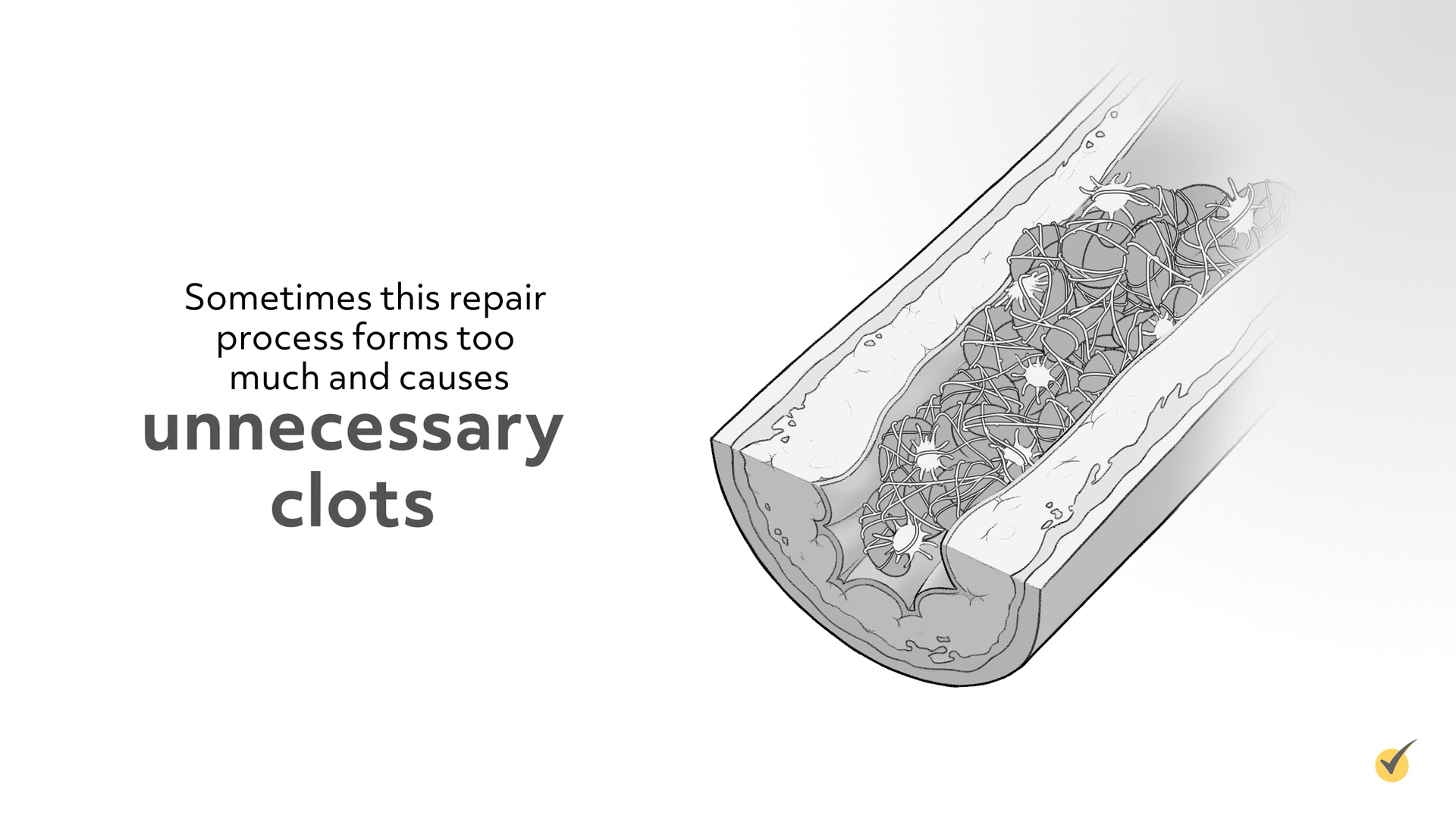 Aspirin is commonly used to reduce short and long-term mortality risks of blood clots. It produces irreversible antiplatelet effects that persist for the life of the platelet (7-10 days). For patients with a suspected or actual acute myocardial infarction (MI), transient ischemic attack (TIA), or evolving thrombotic stroke, an oral dose of 160 to 325 mg is given initially (preferably chewed up for better absorption). Aspirin 81 mg may be given daily for long term prevention of MI, stroke, or a patient with prosthetic heart valves. Adverse effects are uncommon, but there is an increased risk of bleeding, including hemorrhagic stroke. However, 85% of strokes are thrombotic, whereas only 15% are hemorrhagic, so the benefits of aspirin and other antiplatelet drugs outweigh the risks. 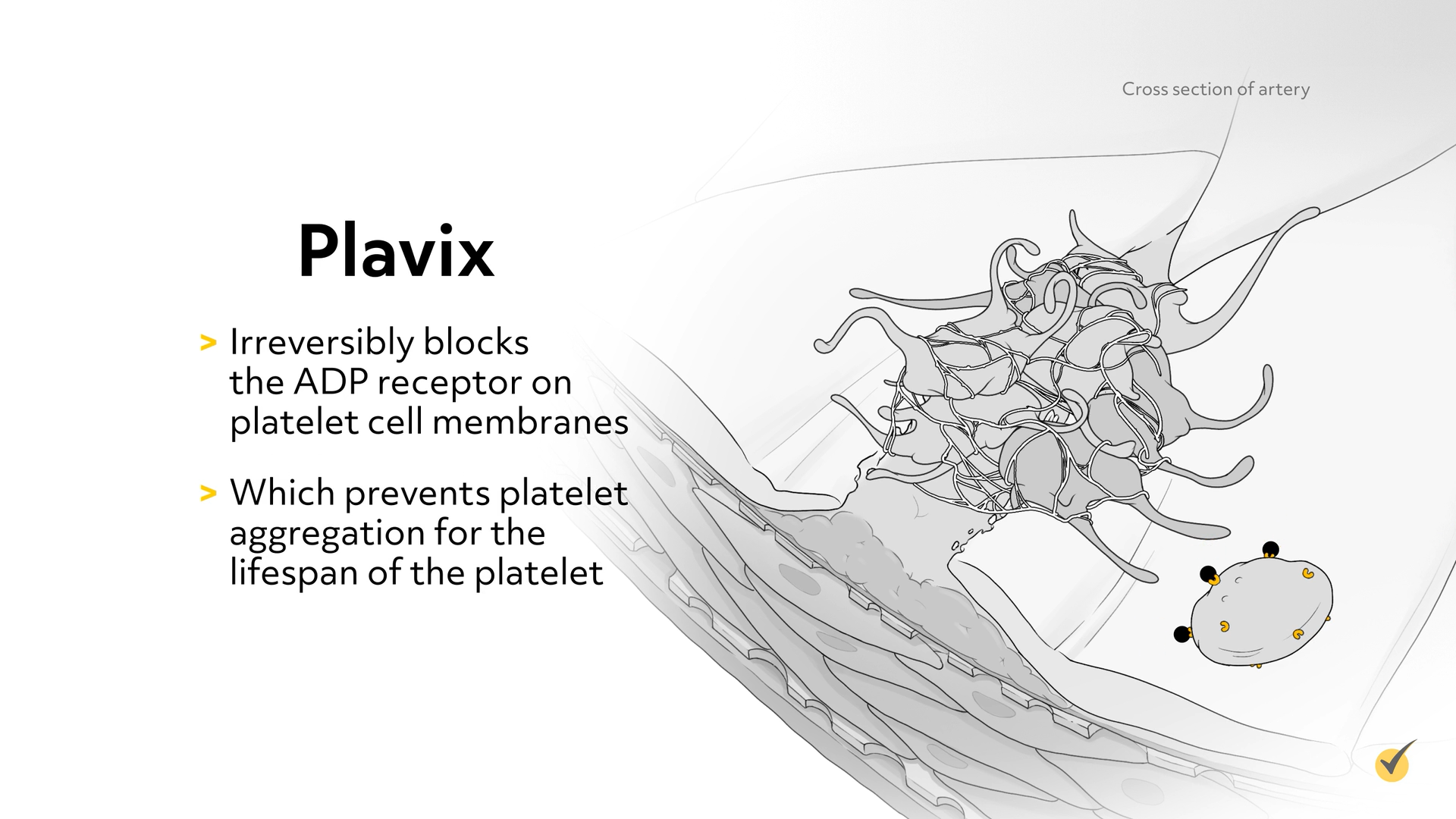 If aspirin cannot be taken, clopidogrel (Plavix) can be given daily. Plavix irreversibly blocks the ADP receptor on platelet cell membranes, which prevents platelet aggregation for the lifespan of the platelet. It is given for MI, stroke, and vascular death from plaque build-up. The most common side effects are rash, pruritus, purpura, and diarrhea. Hemorrhage and severe neutropenia have also been reported.

Another type of antiplatelet drug is the glycoprotein IIb/IIIa receptor antagonists, which include abciximab (ab SIK si mab), eptifibatide (epTIF i ba tide), and tirofiban (tye roe FYE ban). These drugs are given IV to prevent fibrinogen and other molecules from binding to these glycoprotein receptors on activated platelets. Thus, platelet aggregation is inhibited. Bleeding is the most common adverse effect, so they should be used cautiously if given with other antiplatelet drugs, thrombolytics, or anticoagulants.

Cilostazol is another antiplatelet drug that inhibits phosphodiesterase, which inhibits platelet aggregation and produces vasodilation. It is given for intermittent claudication (cramping leg pain due to poor blood circulation in the arteries of the legs, typically occurring with exercise). Symptoms usually improve within 2-4 weeks, but may take up to 12 weeks. The most common adverse effects are diarrhea and headache.

Next, let’s look at thrombolytics, also known as fibrinolytics. Thrombolytic agents are given to dissolve thrombi (blood clots). They convert plasminogen to plasmin, which breaks down fibrin, the framework of a thrombus. They are given for acute, severe thromboembolic disease, such as myocardial infarction (MI), pulmonary embolism (PE), and iliofemoral thrombosis. The goal of thrombolytic therapy is to give the drug as soon as possible to re-establish blood flow as quickly as possible and prevent or limit tissue damage. After thrombolytic therapy, anticoagulant drugs and antiplatelet drugs are given to decrease the recurrence of a thrombus. 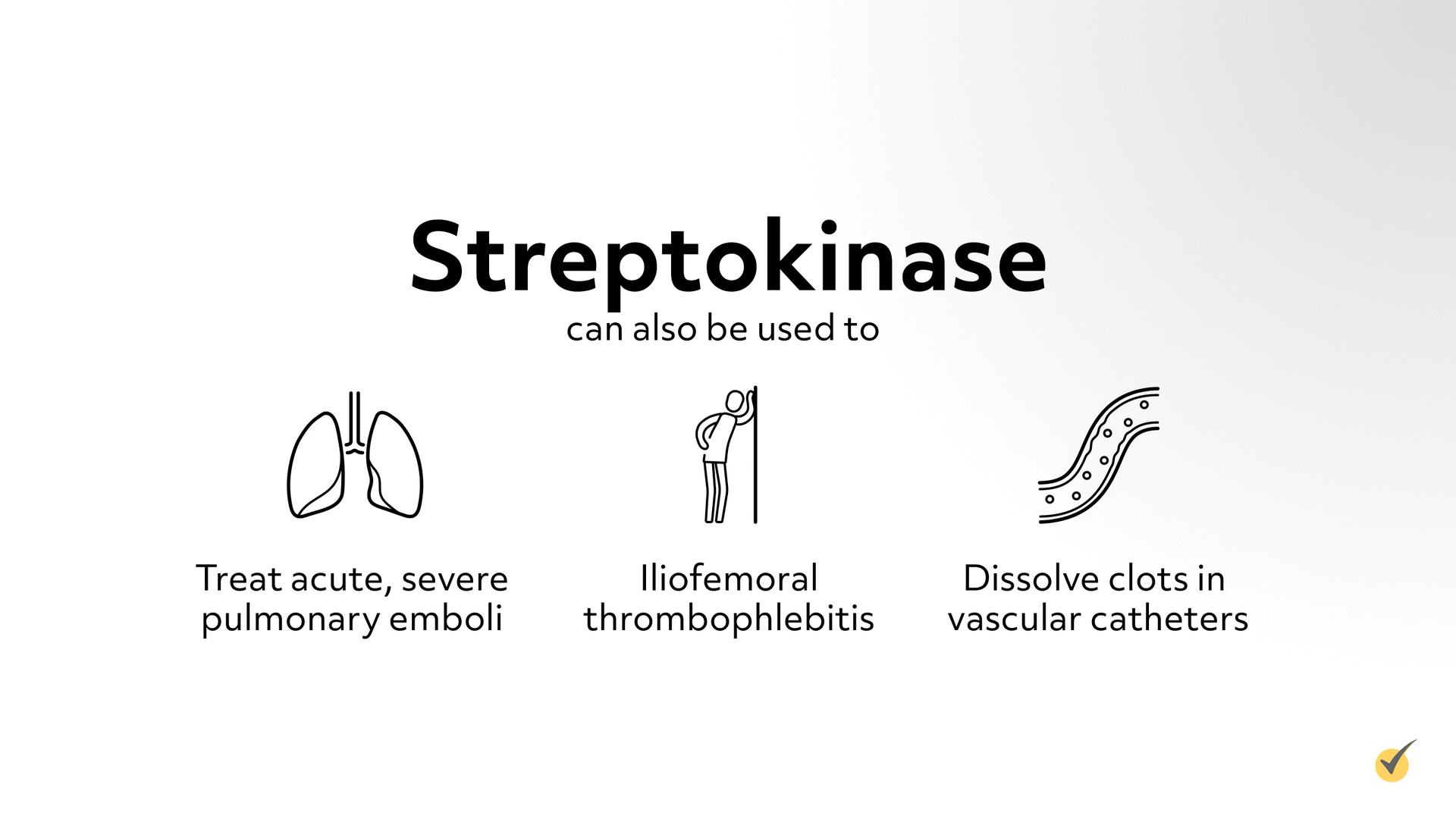 Streptokinase and urokinase are enzymes that break down fibrin, used mainly to lyse coronary artery clots in acute MI. Streptokinase can also be used to treat acute, severe pulmonary emboli or iliofemoral thrombophlebitis, and to dissolve clots in vascular catheters. Streptokinase may cause allergic reactions, in which case urokinase is recommended. 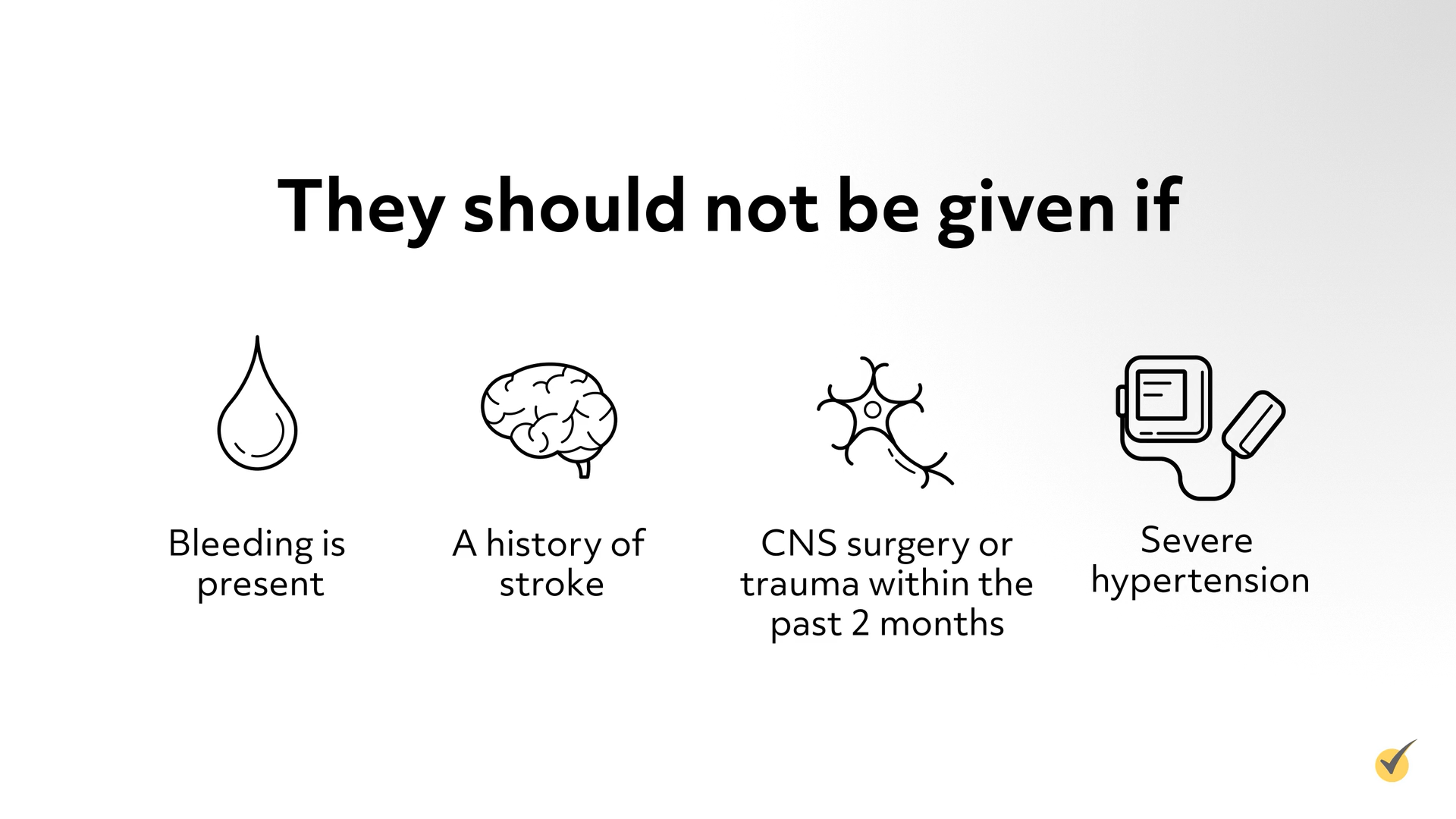 Alteplase, reteplase, and tenecteplase are tissue plasminogen activators (tPa) used mainly in acute MI to dissolve clots obstructing coronary arteries and re-establish perfusion of tissues beyond the clot. The main adverse effect is bleeding, which could be internal or external. So, they should not be given if bleeding is present, a history of stroke, CNS surgery or trauma within the past 2 months, and severe hypertension.

Let’s go over a couple of review questions –
Which antiplatelet drug irreversibly blocks the ADP receptor on platelet cell membranes, preventing platelet aggregation for the lifespan of the platelet? It is given daily for MI, stroke, and vascular death from plaque build-up and has common side effects of rash, pruritus, purpura, and diarrhea.

If you chose Clopidogrel (Plavix), you’re correct! Plavix is often given when Aspirin cannot be taken.

Ok – The nurse is caring for a patient with complaints of chest pain radiating to the arm and jaw, shortness of breath, and feeling of impending doom. The patient had a stroke one month ago. ECG reveals evolving acute MI. Vital signs: BP 145/82, HR 125, Resp 36. The nurse should question which of the following physician orders?

Thank you for watching this video about antiplatelets and thrombolytics! Be sure to check out our other videos!