5 Elements of any Map

Although they may seem complicated at first glance, any map worth using can be broken down into five basic elements:

Parts of a Map

Today, we’re going to be taking a closer look at these five basics of modern mapmaking, so you can accurately use any standard map that you might come across, be it paper or electronic, or even in a foreign language. Let’s get started!

It may seem a simple place to start, but every map needs a title. The title indicates the theme of the map, explaining what is represented in the image you see. A common theme most people are familiar with is that of a roadmap, showing drivable streets and other avenues of transit generally associated with daily travel. There are, however, several other prominent themes represented in maps, of which the political and physical are the most widely used. Political maps show the borders and territorial designations that countries have decided upon, whereas physical maps aim to accurately recreate a visual representation of the physical landscape of a given zone.

To put the information of the map into context, cartographers must add a map scale. The presence of a map scale allows for a map to be physically and visually distinct from other maps, yet still accurately represent the same relative amount of distance between each feature. The map scale usually appears as a series of lines taken from a ruler and added to the page in one corner with a label of the specific units of measurement used. Next to or underneath this measurement is the real-world distance physically represented by each unit of distance on the scale, such that one inch on the map is equivalent to one mile or even hundreds of miles depending on the scope of the image.

The explanation for all the symbols scattered throughout the image falls into the category of a map key. A map key will contain a list of different symbols and/or colors next to a brief explanation of what each symbol means. For practical purposes, physical maps tend to limit the number of different symbols used in a single given image. It can also be helpful to know that political maps may show geographic features as reference, but their general focus lies on roads, cities, bridges, and borders, with the proper iconography labeling each within the map key.

A small, but important part of each map is the directional reference. Known as a compass or compass rose, its purpose is to distinguish north from south and east from west. 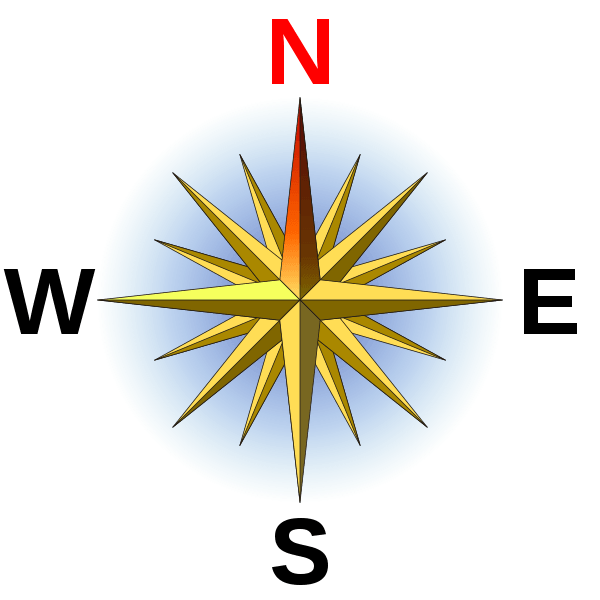 A compass rose usually appears as a four- to eight-pointed star with the top point generally labeled as “North,” with “East” and “West” to the right and left respectively, and the bottom-most point, or downward, labeled as “South.” These directional identifiers enable maps to be drawn from any orientation with respect to the Earth’s surface without losing accuracy.

The last feature critical to all maps falls into the ability to label a specific location on the planet in such a way that can be described verbally or written down. To achieve this, cartographers use an agreed-upon imaginary grid of lines. This grid allows for an accurate two-dimensional representation of our three-dimensional, spherical planet, with each of these lines having its own individual “zero points.” The numbering of this grid increases with the distance from each of these starting points, up to 180 degrees from either side, creating a complete 360-degree circle around the planet in any direction. 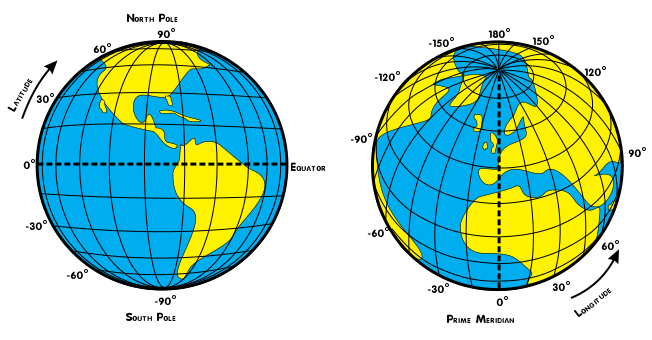 The vertical lines running through this grid are referred to as the “lines of longitude,” with the Prime Meridian known as the “zero of longitude”. This vertical zero line runs the height of the planet from the North pole to the South pole through Greenwich, England. The horizontal grid lines on the other hand, known as “lines of latitude”, run east to west like a belt around the Earth, with the Equator being considered the “zero of latitude.” An easy way of remembering the difference between longitude and latitude is the simple rhyme “latitude-flatitude,” with “flat” implying that the horizontal lines could be stacked to the top of the map as though they were logs in a pile.

And that’s all there is to it! Now that you’re familiar with the different elements of a map, you’ll be able to accurately read any map you come across.