What is an Adjective?

The quick brown fox jumps over the lazy dog.


This silly sentence contains all of the letters of the alphabet, and you might notice it is also stuffed full of adjectives. In this video, we’ll talk about what adjectives are and how to use them in a sentence.

An adjective is a word that describes a noun. It can describe something’s size, color, age, origin, material, or shape. Adjectives can be used to make the subject simpler to understand and to shed light on what an author wants their ideas to truly convey.

The adjectives used in the sentence about the fox and the dog are quick and brown, describing the fox, and lazy, which describes the dog.

Here is another example:

She is the smartest student in the class.


Student is the noun and smartest is describing what kind of student she is, so smartest is the adjective.

Shakespeare has been credited for adding hundreds of new words to the English language when he was writing, and many of those were adjectives. An example of Shakespearean adjectives can be found here:

“Thou cold-blooded slave, hast thou not spoke like thunder on my side, been sworn my soldier, bidding me depend upon thy stars, thy fortune and thy strength, and dost thou now fall over to my fores?”
– King John

Here is an example from the book Little Women:

“She remembered her mother’s promise and, slipping her hand under her pillow, drew out a little crimson-covered book.”


Crimson-covered describes the color of the fabric that was covering the book.

As you can see, using adjectives can make your sentences and ideas come to life. Instead of just saying that the firework display was beautiful, you can make it much more exciting and easier to envision what the fireworks actually looked like by saying:

The fireworks this year were bursting brightly overhead as the bright, dazzling sparkles lit up the sky.


Bright and dazzling are just two of the many, many adjectives that make writing so descriptive and fun to read!

I hope that we have helped you understand more about adjectives. Thanks so much for watching. See you next time and, as always, happy studying!

What is an adjective?

An adjective is a word that describes a noun, adverb, or other adjective. For example, green, small, magical, old, and quick are words that can be used as adjectives.

What is a predicate adjective?

“Jorge was exhausted after school.”
“This blanket is soft.”
“That pizza smells delicious!”

What is a superlative adjective?

What is a coordinate adjective?

“They walked down the long, narrow path.”
“That is a large and expensive house!”
“There are three soft pillows on my couch.”

Is “the” an adjective?

Yes, the word the is an adjective. The is known as an article, along with the words a and an. Articles describe whether something is specific or general. The article the is used to describe something specific. 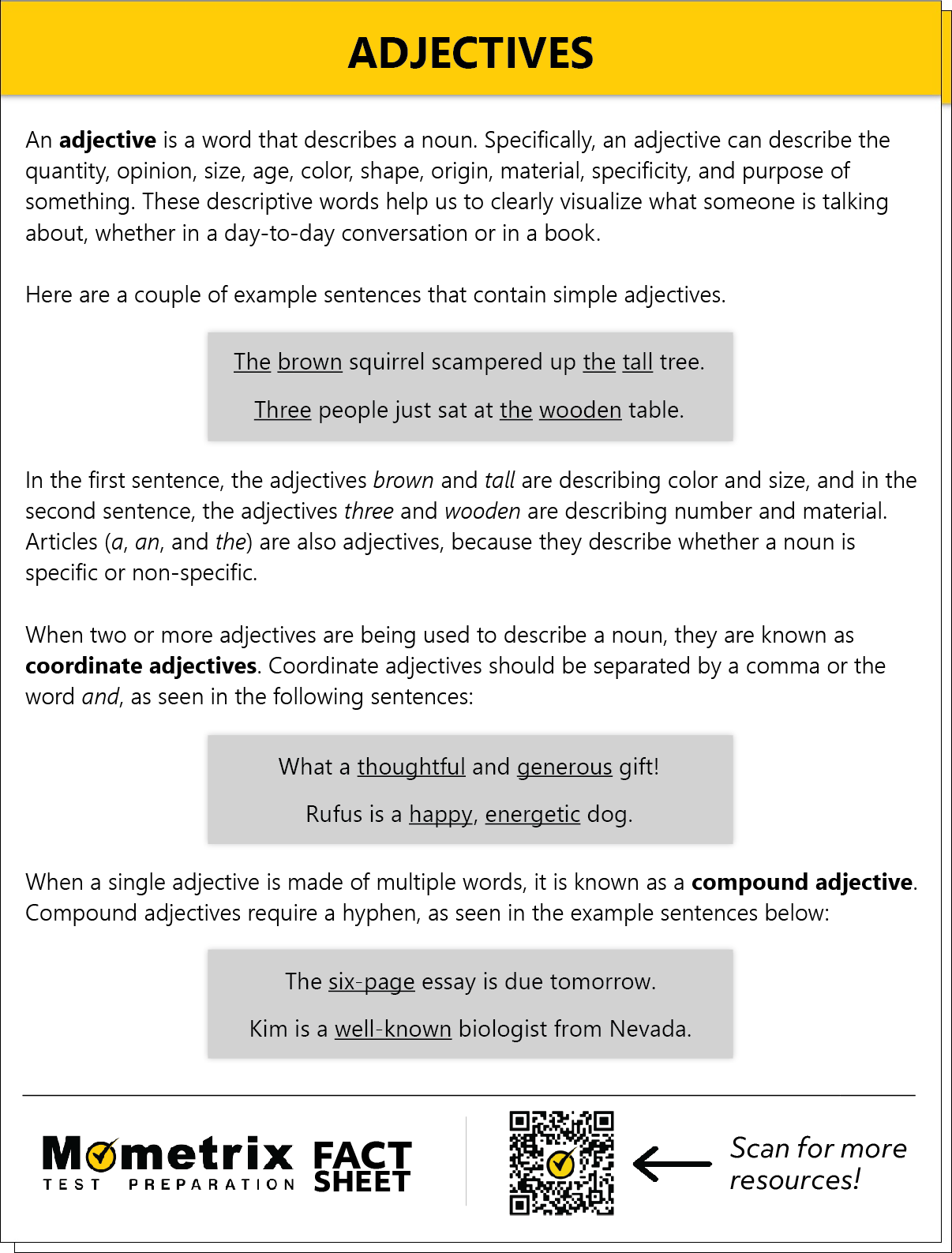