Hi, and welcome to this video on viruses and antiviral drugs.

Viral diseases are the most common type of infective disorders. A virus is a simple microorganism in that it lacks most of the structures found in bacteria and other types of cells.

The virion, which is the infective virus particle, consists of nucleic acid (which carries the genome) surrounded by layers of protein that create a protective membrane called a capsid.

Additionally, some common viruses are enveloped, which means that they have an additional protective lipid membrane around the capsid, and glycoprotein receptor spikes that project from the envelope and attach to host cells. This is common to most animal viruses, including influenza and coronavirus.

The envelopes develop from small pieces of the host cell’s plasma membrane during the budding process.

Viruses come in various shapes, such as helical (which are rod-like), polyhedral (which are many-sided), enveloped, or complex, which has various odd shapes. 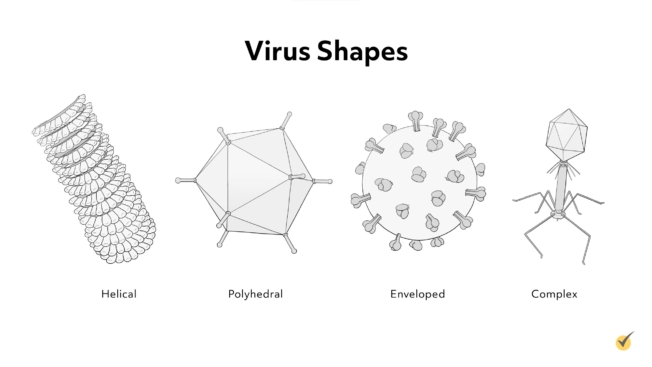 The nucleic acid of virions contains either RNA or DNA, depending on the type of virus.

Some common DNA viruses include:

Some common RNA viruses include:

Virions cannot reproduce independently, but must first bind to and enter a host cell. Virions do this by binding to receptors on the host cell, but they are very specific about the receptors to which they can attach.

For example, influenza virions bind to receptors on epithelial cells in the respiratory tract, resulting in respiratory disease. Human immunodeficiency virus (HIV) binds to CD4 lymphocytes, a type of white blood cell that is part of the body’s immune system, causing immunodeficiency.

Some virions are able to bind with numerous different types of host cells, resulting in a range of symptoms.

Let’s take a look at the different stages that a virus goes through during the infective process.

The first stage is attachment or fusion. The virions attach to compatible receptor sites on a host cell’s plasma membrane and release enzymes that weaken the membrane. Virions bind to specific receptors on the plasma membranes of receptor cells and the specificity of these receptors varies. The type of disease depends on the types of cells to which the virion binds.

The second stage is penetration. Virions are absorbed into the host cell through a process called endocytosis. The plasma membrane engulfs the virions forming a cavity that contains the virions, extracellular fluid, and other substances. The cavity separates from the membrane, forming a vesicle inside the host cell.

Once inside the host cell, the third stage, uncoating, takes place. This means that the capsid degrades and releases nucleic acid into the cytoplasm of the host cell.

The fourth stage is replication, also known as biosynthesis, and this process varies depending on whether it’s a DNA or RNA virus, as well as the type of RNA virus. With most DNA viruses, replication takes place in the host’s nucleus, but with most RNA viruses, replication takes place in the host cell’s cytoplasm. During this stage, transcription occurs (which is the creation of an RNA copy of a gene sequence). Basically, this means that the nucleic acid is being copied and new viral proteins are produced.

For some viruses, the polymerase enzymes needed to carry out this process are present in the host cell, but for other viruses, they are not. For example, HIV comes packaged with the enzyme reverse transcriptase.

Errors can easily occur with polymerase enzymes and RNA viruses, resulting in a high rate of mutation.

The fifth stage is assembly, during which the pieces of nucleic acid and proteins come together to form new viral particles, which mature until they are ready for the sixth and last stage, release.

Release sends new virions out of the host’s cell. These new virions are now able to infect additional cells and continue the cycle. Release can occur through three mechanisms, depending on the type of virus:

The first mechanism is budding, during which the virions take parts of the host cell’s plasma membrane with them, forming the envelope that is common to many viruses. With budding, each viral particle is released individually.

The second mechanism is exocytosis, which is essentially the reverse of endocytosis. A vesicle containing a number of virions forms within the host cell, merges with the plasma membrane, and opens to release multiple virions.

The third mechanism is cell lysis. The virions disrupt the host cell’s plasma membrane, resulting in release of the virions and death of the host cell.

Once released from the host cell, the virions go on to infect other host cells and the process continues.

Antivirals are drugs used to treat viral infections. The first antiviral was approved in 1963. Antivirals work in various ways, typically by inhibiting the ability of the virus to infect rather than killing the virus. However, because viruses replicate within host cells, it is difficult to develop drugs that harm the virus without also harming the host cell.

Antiviral drugs may be broad-spectrum, such as ribavirin, targeting multiple viruses or, as in most cases, targeted, which are made for specific viruses, such as HIV medications.

Antivirals usually target different stages of the replication process.
Some antivirals, such as anti-receptor antibodies or natural ligands, block receptors on cell membranes so that the virus can’t enter the cell. Others, such as enfuvirtide, are entry inhibitors that prevent fusion of the virus with the cell membrane.

Some, such as amantadine and rimantadine, inhibit both penetration and uncoating. Some, such as zidovudine, zanamivir, and oseltamivir phosphate (Tamiflu), deactivate the enzymes involved in replication, preventing the virus from multiplying or preventing release of the newly-generated virions.

Some, such as acyclovir and foscarnet, inhibit DNA synthesis. Protease inhibitors inhibit viral maturation in the host cell. And finally, some drugs, such as interferon, stimulate the immune system to fight the infection.

One of the goals of researchers is to develop more comprehensive broad-spectrum antivirals because those that are currently available are still limited in scope and effectiveness.

One of the main problems with developing antiviral drugs is that they develop resistance very easily. For example, antivirals initially used to treat influenza are no longer effective because the influenza viruses are now resistive to them.

That’s all for this review! Thanks for watching and happy studying!