Stars of all kinds start the same way–a cloud of gas in space begins to collapse on itself. As the gas contracts, it heats up. When it heats up enough to begin nuclear fusion–the creation of helium from its own internal hydrogen–it’s called a star. While all stars begin this way, from this point stars can look very different from each other. The most important factor in determining different types of stars is the mass–or amount of matter–a star contains. This depends upon the size of the original collapsing gas cloud. A star that is fusing hydrogen into helium is called a main sequence star. If a collapsed gas cloud falls short of having enough mass to start hydrogen fusion, it is called a brown dwarf.

Stars were originally classified by the light they emit. At first, there was a system of categorizing stars in alphabetical order, but as scientists learned more about stars, the letters were rearranged and many were dropped. As a result, stars today are classified using the following letters: O B A F G K M. This order is called the spectroscopic sequence. Each letter within the spectroscopic sequence is called a star’s spectral class. Now let’s explore stars with different spectral classes.

A star that contains a lot of mass must work very hard against gravity. The force that works against gravity in a star is the pressure from the heat energy released by its internal fusion. To work hard against gravity, then, large stars must generate a lot of heat. This makes the star “white hot,” or blueish-white. Think about a gas range – when the flame is really hot it’s blueish-white. These large, hot, blue stars are the O-type stars in our spectroscopic sequence. Because they are using their hydrogen fuel at a high rate, they don’t live as long as the other main sequence stars. An O-type star might only live about 10 million years or less. This means at least six generations of O-type stars have been born and have died in our sky since the dinosaurs walked the Earth. These stars are so large that they are also sometimes called blue supergiants. 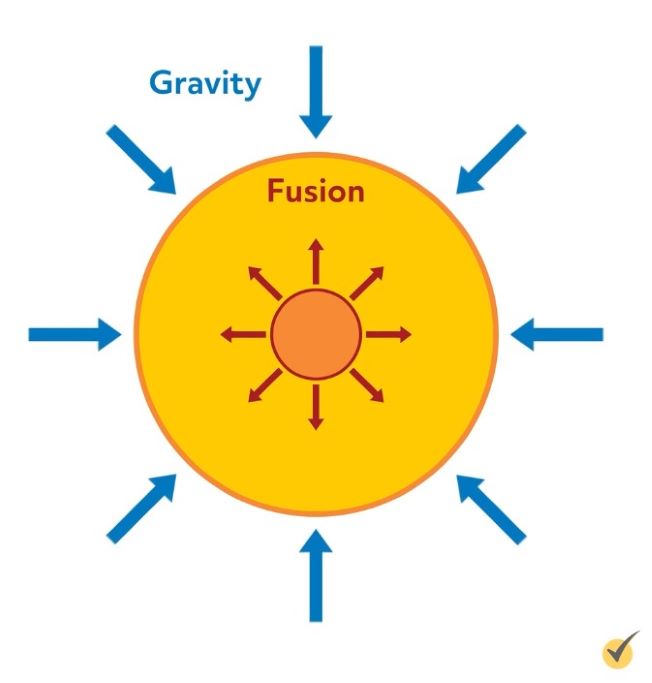 On the other end of our spectroscopic sequence, we see the letter M. These stars are the smallest stars. Because they don’t have much mass to hold up against gravity, they don’t have to work very hard and their fuel use rate is low. They are not as hot as O-type stars, and sometimes these stars are referred to as “cool,” though they are still hot enough to incinerate anything that touches them! They burn a cool red color–you should be associating red with cooler objects! Their low rate of fusion means they last a very long time and only die after 100 billion years, which is ten times the lifetime of the Sun! These stars are so small they are sometimes called red dwarfs.

One fantastic example of a middle-sized star is our Sun. As a G-type star, it’s a little bit smaller than a truly middle-sized star, but since it’s nearby we can study it very well. Its color, fusion rate, and lifetime all lie between the O-type and M-type extremes. The Sun shines a yellow-white color, and it will live for about 10 billion years. This image shows the size of the Sun versus a smaller K-type star and an even smaller M-type star. 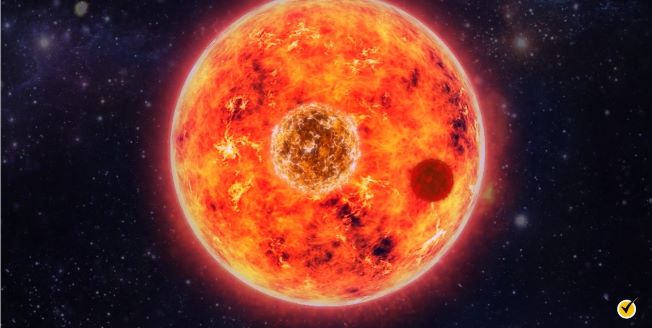 When stars run out of fuel they change into new types of objects. When a small or middle-sized star begins to run out of hydrogen fuel, it will use helium as a fuel source. This causes the star to cool and expand. Since it is cooler, it grows redder. A large, red, dying star is called a red giant. The visibly red star Aldebaran is an example of a red giant. It marks the bull’s eye in the constellation of Taurus. 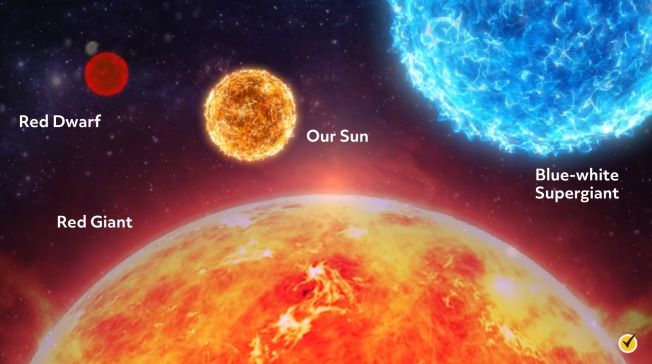 When small and middle-sized stars become red giants, they gradually lose the ability to hold on to their outer layers. The insides contract and heat up, while the outer layers expand and cool, eventually becoming transparent. The outer layers in this case are called a planetary nebula. The reason we call them “planetary” nebulae is due to their resemblance to planetary disks that were discovered around the same time, even though we know today that nebulae have nothing to do with actual planets.

In the center of the planetary nebula, you can still see the compact bright core of the star. It is no longer maintaining a fusion reaction. It has turned into a hot coal, gradually radiating away its heat. This white-hot remnant of a star is called a white dwarf, and it is indeed small– about the size of the planet Earth. In theory, it will continue to cool, slowly fading away with time. When it has faded completely, it will be a black dwarf. The universe is not old enough for any white dwarf to have cooled completely, so there are no black dwarfs yet. The universe is destined to become filled with them, though, as most stars will end their lives this way.

A large star begins its life the same way, and will also turn into a red giant when it runs out of fuel. The red giant for a large star is so large, however, that it is called a red supergiant. One example is Betelgeuse in Orion. This star is enormous, and it is not even the largest red supergiant in our sky.

These large stars have so much gravity that they will never lose contact with their outer layers as small stars do. They continue using up what fuel remains, maintaining enough pressure to balance their enormous gravity. Eventually, as the fuel is used up, the reaction rate slows, and the large star collapses under its own weight. The outer layers bounce off the inner layers and explode in a fiery supernova. Within a supernova explosion, a new object is being born. The inner layers of the star do not explode, but continue to collapse until the central object is unbelievably small. One possible object you find left over is called a neutron star. Even though it is called a star, a neutron star does not have fusion occurring inside of it. Instead, it is a big ball of the type of subatomic particle called a neutron. Now only about 10 miles across, this object is so incredibly dense that a teaspoon of neutron star would weigh about as much as the island of Manhattan. Sometimes, neutron stars have an enormous magnetic field that gives out regular pulses of light as the neutron star spins. Such an object is called a pulsar. The Crab Nebula is the remains of a supernova observed in 1054, and it contains a pulsar in its center.

As bizarre as neutron stars and pulsars sound, it’s the less mind-blowing alternative for a large star’s death. If a star is large enough, nothing can slow the collapse of its core. In this case the star leaves a black hole in the center of the supernova explosion. No one knows what the inside of a black hole is like, because this is an object so dense that even something traveling at the speed of light would not be able to escape. That means no light comes from it, giving it its spooky name. While no one can see a black hole, astronomers have observed objects orbiting black holes and falling into black holes. Light also bends around black holes, as they distort gravity. These objects sound like science fiction, but they are very real and are actively being studied by astronomers to learn more about them. This artist’s conception shows a black hole consuming a nearby star.

To those studying stars, astronomers have been fairly kind in that stars are mostly given descriptive names. The largest ones are supergiants, the smallest ones are dwarfs. The most important things to recall are the spectroscopic sequence (O B A F G K M) and the fact that blue means hot while red means cooler. The O-type main sequence stars are the hot, big, blue ones (blue supergiants), and the M-type main sequence stars are the cool, small, red ones (red dwarfs).

When thinking about the things stars can turn into when they die, it’s easiest to think in terms of a flow chart. A small or medium star turns into a red giant at the end of its life. Then it creates a planetary nebula and a white dwarf. A large star turns into a red supergiant. Then it creates a supernova explosion, leaving behind either a neutron star (which might be a pulsar) or a black hole. 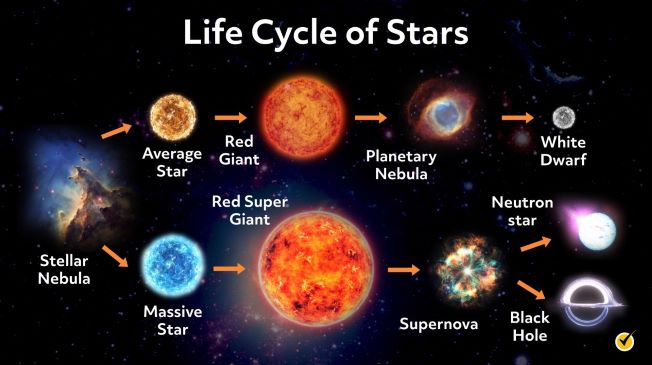 Astronomers also have additional categories of stars based on their luminosities, but we don’t have time to get into those in this video. There are also rare kinds of stars that have not been covered here. It is important to remember that whenever scientists classify anything, there are objects that do not fit neatly into one category or another. The goal of giving names to the different kinds of stars is that scientists can compare and contrast these categories. Therefore, it is the differences between the categories that are most important. For stars, the main difference that determines a star’s type and its fate is the star’s mass. The mass will determine the size, color, temperature, spectral type, and the end fate of the star. For stars on the main sequence–those fusing hydrogen into helium in their cores–a blue star is always more massive than a red star. Color is easy to see so this is a useful shortcut to weighing a star. Next time you look up on a clear night, see if you can tell which stars are redder and which are bluer, and remember what that says about the type of star you are observing.

That’s all for this video. Thanks for watching, and happy studying.