We interact with water in its different forms every day. It’s a simple little molecule—just two hydrogens and one oxygen—but somehow it makes life as we know it possible. Today, we’re going to take a look at the physical properties of the water molecule and learn about what makes it so special.

We know the chemical formula of water is H2O—two hydrogens covalently bonded to one oxygen.

This leads to the electrons spending more time around the oxygen, resulting in a partial negative charge on the oxygen, denoted by δ-.

Since the electrons spend more time near the oxygen, they spend less time by the hydrogen, resulting in a partial positive charge on the hydrogens, denoted by δ+. When electrons are unevenly distributed in a covalent bond like this, the bond is described as polar. This is represented by an arrow pointing to the partial negative of the bond with a plus sign at the partial positive end.

So, we’ve established that each O-H bond is polarized, but what about the entire water molecule? Because water is bent (a result of the two lone pairs on oxygen) the hydrogens are on one side of the oxygen, so their bond dipoles add together to create a large molecular dipole.

Said another way, water is a highly polar molecule, where one side is partially positive and the other is partially negative.

This leads to the formation of hydrogen bonds, an interaction between a partially positive hydrogen and the lone pair of a partially negative acceptor (in this case, oxygen). Because oxygen has two lone pairs, each oxygen can hydrogen bond with two hydrogens. Thus, each water molecule can have up to four hydrogen bonds, resulting in a highly interconnected web. 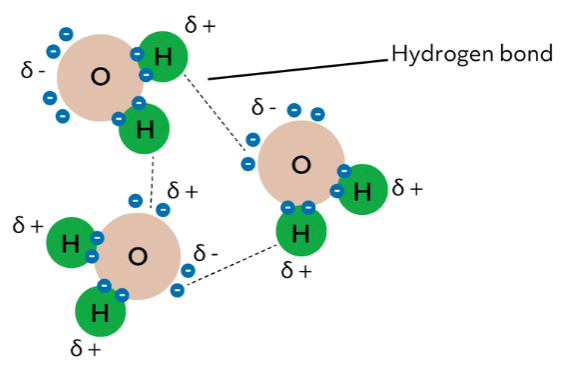 Electrostatic interactions and hydrogen bonds are types of intermolecular interactions. These interactions are individually weak (much weaker than covalent bonds), but when there are lots of them, they significantly influence the physical properties of the substance. Let’s consider this for water.

We can use this reasoning to explain other physical properties of water. For instance, why does it take so long to boil a pot of water? It’s because the specific heat of water is the highest of any common liquid, meaning water requires more heat (energy) to increase its temperature. That’s because to increase the temperature, the kinetic energy of the water molecules must increase. But to do that, the hydrogen bonds need to be broken, which takes extra energy, resulting in a specific heat of 1 calorie/gram C. Compare this to ethanol, which has a specific heat of .6 calorie/gram C. It takes almost twice the energy to increase the temperature of water than ethanol—all because of the intermolecular interactions!

Similar reasoning helps us understand why significant energy is required to melt and vaporize water.

Alright, let’s finish with a review. We’ve examined the structure of an individual water molecule and established that it is highly polar. This allows water to form strong intermolecular interactions (like hydrogen bonds) with itself and other polar molecules. These interactions account for most of the physical properties of water, like its cohesiveness, adhesiveness, and high specific heat. More generally, we’ve also learned that to understand the bulk properties of any substance, we first need to understand the molecular properties and the types of intermolecular interactions that molecules can form.

We hope you feel prepped and empowered, thanks for watching!