Hi, and welcome to this review of the properties of liquids! First, we’re going to discuss the macroscopic properties, the things that we can observe with our eyes, and then work to explain these properties from a molecular perspective. So, hopefully, by the end of the video, along with a more formal knowledge of liquid properties, you’ll be able to make an educated guess about how a liquid will behave just based on the molecular structure. Let’s get started!

The good news about this subject is that you already know a bunch about liquids. You interact with them every day, so a lot of their properties should be familiar to you. In fact, why don’t you take a second, pause the video and write down two physical characteristics of liquids. If you get stuck, think about how they are similar to and different from solids and gases.

Here are two relatively simple characteristics we can recognize:

But, two, liquids don’t expand to fill a vessel. They have a definite volume, which means they also have a surface.

You might have also thought about the stickiness of a liquid or its ability to flow; these properties would be adhesion and viscosity. All great ideas and stuff we’ll get to in a minute.

But let’s consider the first two points and use them to put liquids in context with gases and solids. Liquid is often the intermediate phase between the two and thus, shares characteristics with both. Like solids, liquids are not compressible, meaning we can’t make them any smaller. That’s because they are in a condensed phase where the molecules are so close together, there’s no space to push them any closer. But, like gases, liquids are fluid and take on the shape of their vessel (but, again, don’t expand to fill the vessel).

We can get a basic molecular understanding of liquid properties from this simple diagram showing a microscopic view of each phase. Notice that the molecules in a liquid are tightly packed, but not in an organized lattice, like in a solid. That’s because enough energy has been added to the system to disrupt the forces holding molecules stationary in a solid. This allows the molecules to move around each other- constantly breaking and forming interactions. Remember, even though it’s a condensed phase, the molecules are moving all the time! However, most of the molecules in a liquid don’t have enough kinetic energy to completely separate from each other and disperse into a gas. You can think about liquids (and phases in general) as a balance between the intermolecular forces holding the molecules together and the kinetic energy of the molecules trying to separate them. The exact behavior of each liquid is largely determined by the type and strength of those intermolecular forces. 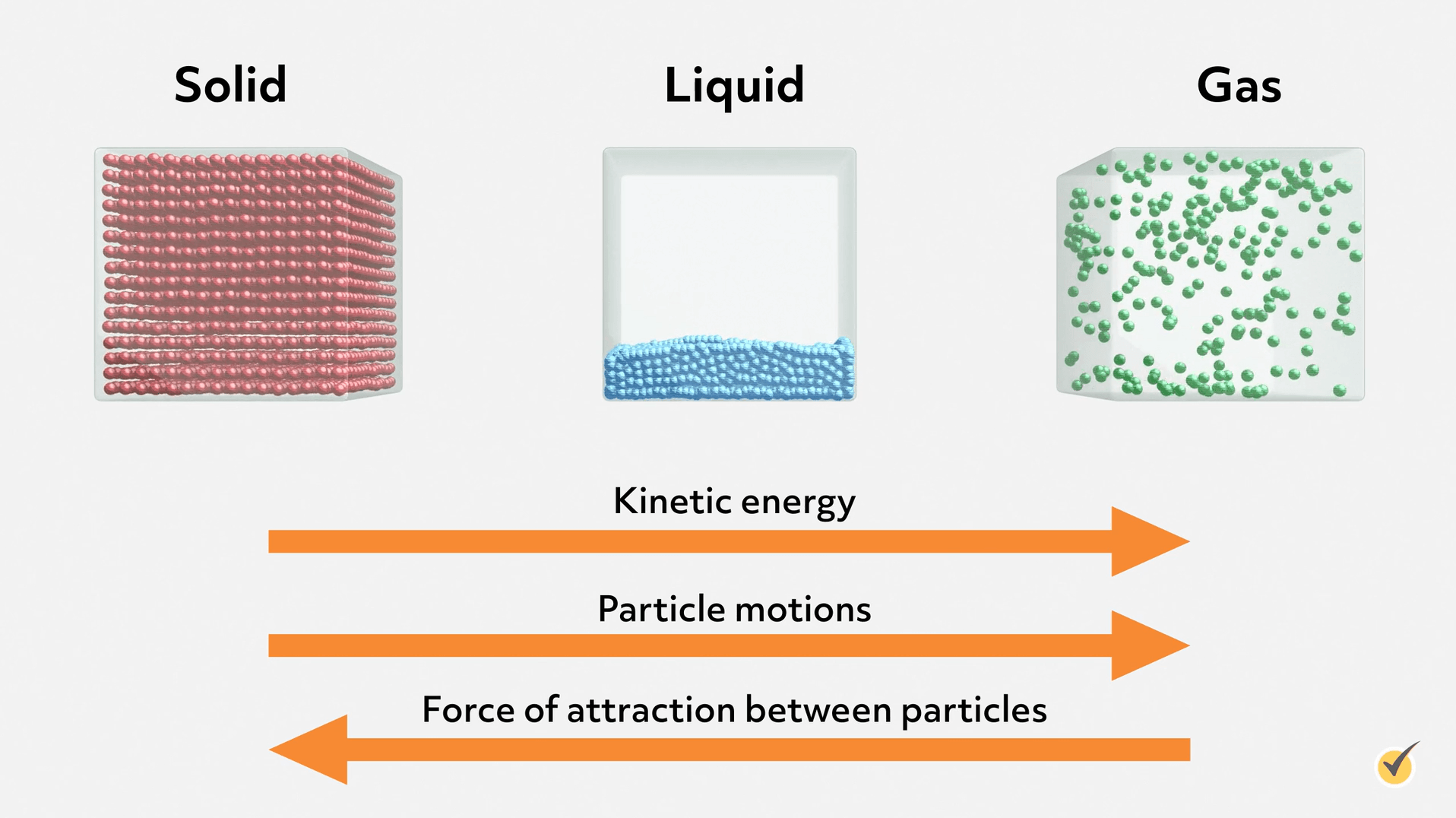 Let’s return to the other properties we mentioned during our brainstorming session- cohesion, adhesion, surface tension, and viscosity. We can gain an intuitive and deep understanding of these properties if we consider intermolecular forces.

First, remember, intermolecular forces are the nonbonding forces that attract individual molecules to each other. They are typically much weaker than ionic, covalent, or metallic bonds, but together they are responsible for the condensed phases of molecular compounds. In other words, if they didn’t exist, every molecular compound would be a gas at standard pressures and temperatures. And we don’t have time here to do a complete review of every type of intermolecular force, so I’ll just briefly name them. From strongest to weakest, there are ion-dipole, hydrogen bonds, dipole-dipole, ion-induced dipole, dipole-induced dipole, and London dispersion forces. 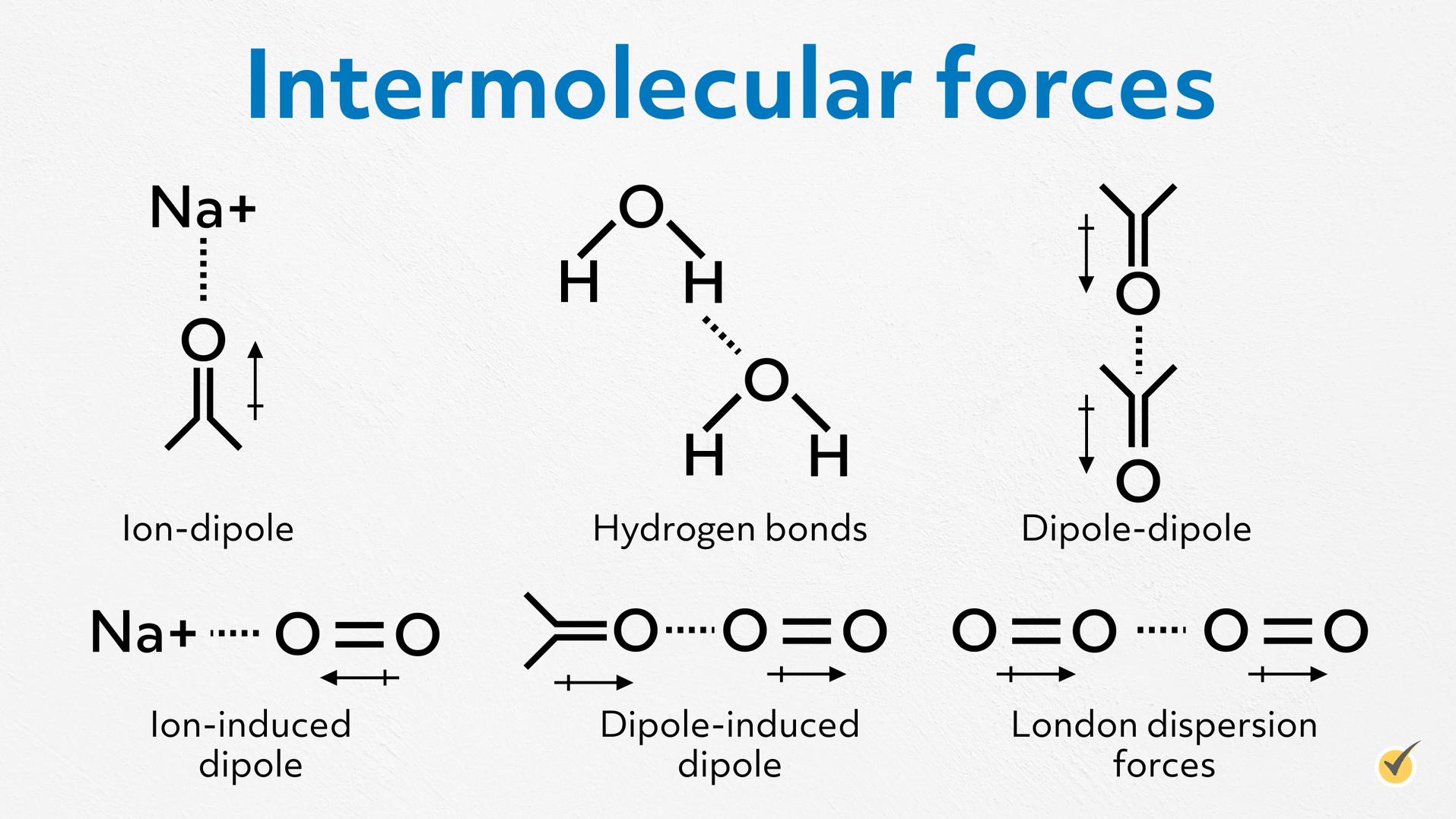 How a liquid behaves is often directly tied to the type and strength of the intermolecular forces.

Often, cohesion and adhesion are connected. For example, water has strong cohesive forces from a complex hydrogen-bonding network, but this also means water molecules can have strong adhesive forces if they can hydrogen bond to a surface. Now let’s use this knowledge to understand surface tension.

You’ve probably observed phenomena related to surface tension, even if you weren’t aware of it. Have you ever overfilled a glass of water and noticed a dome forming above the top of the glass?

Why is that happening? It seems to defy physics. Let’s zoom in and look at it from the molecule’s perspective.

In contrast, the intermolecular forces in oil are too weak to maintain a droplet- those molecules would rather interact with the surface, so the oil spreads out. In other words, the adhesive forces are stronger than the cohesive forces.

We can also apply this to understand the formation of a meniscus. The water molecules are strongly attracted to the glass molecules and climb up the surface until gravity matches that force. 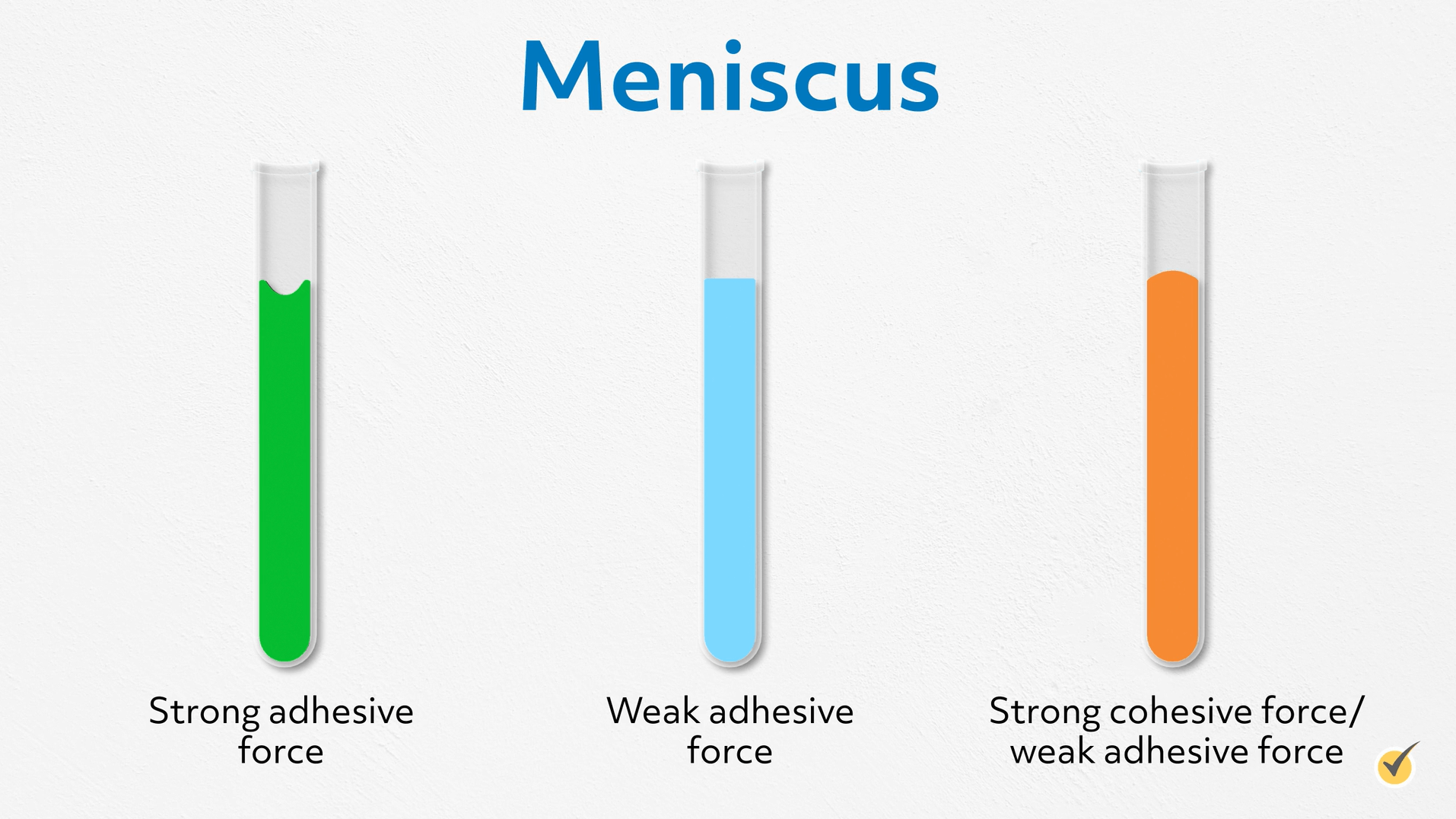 However, not all liquids do this. Some lie flat because the adhesive force isn’t strong enough to overcome gravity. In fact, this is what happens when water is in a plastic test tube.

And lastly, let’s consider viscosity. If you’re not familiar with the word, it’s basically the thickness of a liquid or, more technically, the resistance of a fluid to flow. The larger the viscosity, the slower it flows. For example, oil and honey have a much higher viscosity than water or acetone (a common ingredient in nail polish remover). Why? Well, let’s think about how we can connect this macroscopic property to their intermolecular forces and physical properties.

You can imagine viscosity on a molecular level as correlated with how cohesive the liquid is but with an added consideration. We also need to think about the size and shape of the molecules. A group of small molecules with weak interactions don’t stick together, so they won’t resist flow. But long, skinny, stickier molecules get tangled to one another, so they resist movement away from each other. On a large scale, think about trying to pour cooked spaghetti out of a pot. The noodles are sticky and tangled, so they resist falling out of the pot. You can think about oil and honey molecules in a similar way. As a side note, this is just a qualitative understanding of viscosity. A quantitative approach requires fluid dynamics and engineering.

Let’s finish with a quick review.

Liquids are the intermediate phase between solids and gases. The molecules are tightly packed, like solids, but have enough energy to move around, which allows them to flow like a gas and take on the shape of their vessels.

Now before we go, let’s go over a few review questions to see what you remember.

1. Which of the following is NOT a property of liquid?

2. True or false: Cohesion is how strong the intermolecular forces are between the liquid and their surface.

The correct answer is False! This is describing adhesion.

3. Strong adhesive forces will result in which type of meniscus?

The correct answer is A! The water molecules are strongly attracted to the glass molecules and climb up the surface until gravity matches that force.