Hi, and welcome to this video about population growth! Today, we’re going to cover the unique features of exponential functions and how they are used to model population growth. I’m going to give you a few practice problems later on, so go ahead and make sure you’ve got a calculator handy if you want to try to solve them yourself. Let’s get started!

Before we dive in, let’s remind ourselves of the basics of functions. In simple terms, functions provide the rules on how to mathematically adjust “input” to get “output.” Here’s a simple linear equation:

These rules arrive at the “output” by multiplying the “input” by the constant, \(m\), and adding the value of \(b\). As you know, the graph of any linear function is a line that increases at a constant rate when the slope, \(m\), is positive. These functions are helpful to visualize data that is linear in nature.

Because the growth factor, \(b\), is being raised to a power that is a variable, \(x\), the rate of change in an exponential function is not constant.

The graph here shows the difference between the steady increase of a linear function and the extreme, rapid increase of a function showing exponential growth over time:

Now that we’ve seen the shape of a function that shows exponential growth, let’s look at a few ways this relates to population growth.

Population growth is an interesting concept from many different perspectives. For example, biologists can study the growth patterns of living organisms based on reproductive facts and environmental needs of the species. Another application would be global health professionals and conservationists who investigate the exponential growth that our world population has experienced. 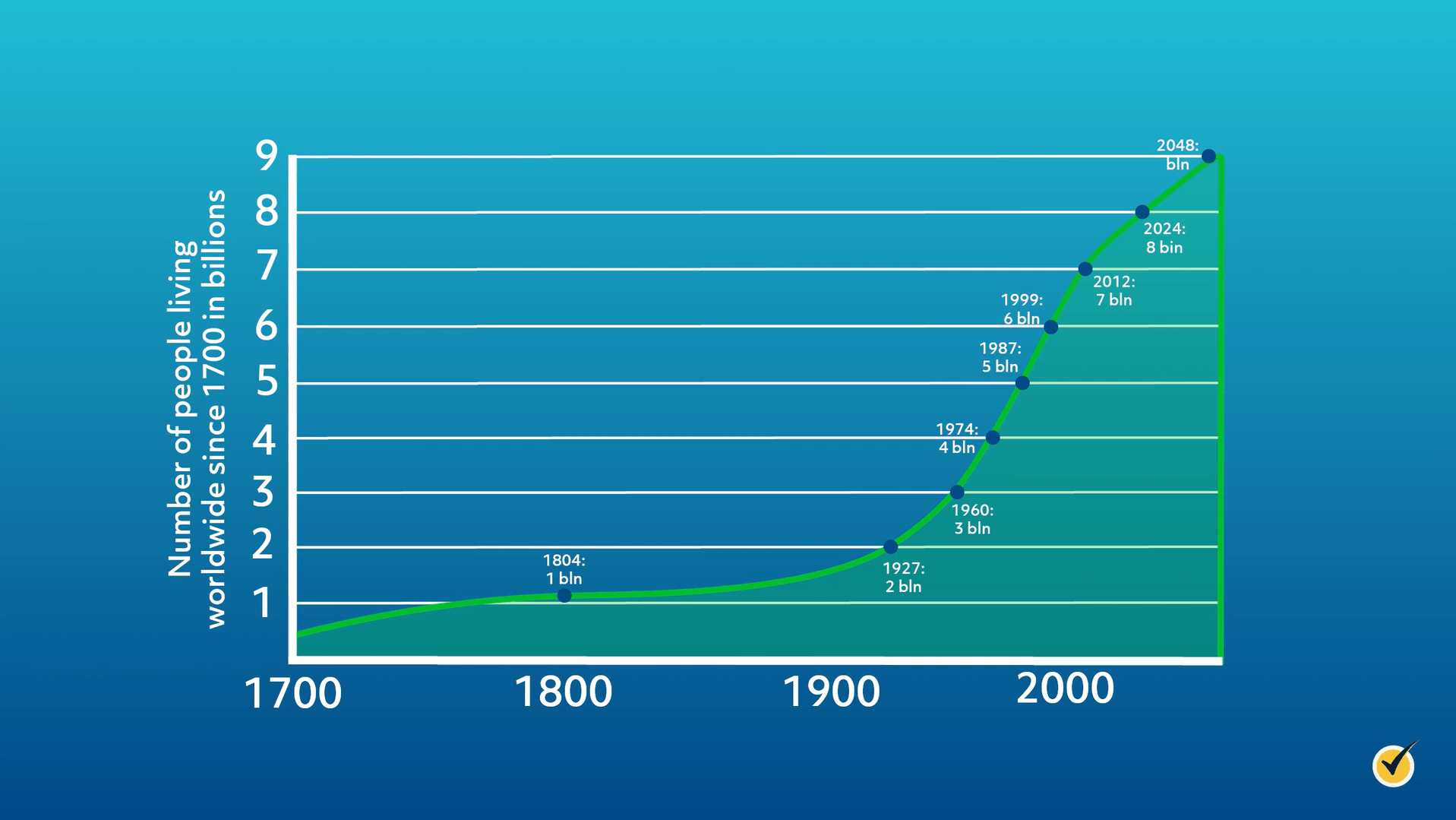 As you can see, our planet has sustained an exponential increase of approximately 6.6 billion people since 1800, with most of that growth occurring during the 20th century!

When dealing with “natural” population growth models, you will notice that the notation is slightly different from a standard math exponential function.

A population model requires the use of the irrational number \(e\), which has an approximate value of 2.71828, as the base. This base is then raised to a power that reflects the growth rate, \(r\), and a unit of time, \(t\). This is the general form of an exponential population growth model.

It is also important to note that this type of growth model is only effective to use for short cycles of time, as true populations are typically limited by external factors that impact growth such as food supply and mortality. Logistic population growth models are more appropriate to use when there are known limitations on growth capacity.

Let’s assume that we’re inspecting a certain bacteria that grows exponentially. If there were 100 bacteria present in a lab sample at 1pm and the growth rate is known to be 2.5% per hour, calculate the number of bacteria that was observed at 4pm.

Our first step is to identify the components of the formula. Here’s what we know:

The initial population of the bacteria is 100.

The amount of time that elapsed in the lab is 3 hours.

We need to use this information to determine the final population, \(P\).

In words, the bacteria in the sample grew from 100 to approximately 108 in 3 hours.

Okay, let’s look at another example. This time, I want you to try to work it out on your own before I tell you the answer.

Our world population totaled 7,631,091,040 at the end of 2018. This reflects a 1.1% increase over the prior year. To practice using the population growth formula, use this information to estimate the world population in the year 2019.

Pause the video if you want to try it out on your own.

So, let’s look at the information we know and plug it all into our equation.

So we have our initial world population

Using this information and a calculator, it is estimated that the world population was approximately 7.716 billion at the end of 2019.

The actual population at the end of 2019 was about 7.714 billion people, which reflects roughly 2 million fewer people from what your estimate should have been!

As of 2020, the population of Africa was approximately 1.341 billion. The annual growth rate is calculated at 2.49%. Use the population growth formula to determine the African population at this time in 2019.

Here’s what we know. The final population of Africa is approximately 1.341 billion.

In this case, the “original” population represents the year 2019. Our calculation shows that value to be about 1.308 billion people.

Here is another example:

Pause the video now if you’d like to try this one on your own.

Ok, so here’s what we know:

We are asked to determine population, \(P\), in mid-year 2022. Since we’ve substituted the known values in our equation, we can use our calculator to find our final answer, which is approximately 335 million.

We can also use this formula to solve for \(t\), the number of years it takes for the original population to grow to the final population. When we solve for any variable, we use algebraic steps to isolate it in order to determine its value. However, in this case, the variable for time is in the exponent of the formula. How can we get to it in order to find its value?

If we want to solve for the variable \(t\) in a population formula, it is as simple as hitting the natural log key on your calculator and continuing with a few additional algebraic steps.

Well, we could simply multiply the current population by the annual growth rate for as many times as it takes to get to 400,000, but solving the exponential equation for \(t\) is a lot more efficient and precise..

As you can see, the unknown in this equation is time. We have to use algebraic steps and the natural log function to solve for the amount of time it will take for the population to be equal to 400,000.

Step 1: Divide both sides of the equation by \(P_{0}\), which will leave an exponential expression on the right.

Note that we will be rounding our answers from the calculator to four decimal places to illustrate this example, but leaving the values in the calculator unrounded gives a more accurate answer.

We are now ready to apply the natural log to the exponential expression on the right side of the equation so we can do the work to solve for \(t\). However, as we know from solving equations, if we perform an operation on one side of the equal sign, you must do the same on the other side to maintain balance.

We now know that it will take about 24 and a half years for the population of Iceland to reach 400,000 people.

That’s all for this review! Now that we’ve worked through some examples, you should better understand the features of exponential functions and how they are used to model population growth.

Substitute this information into the equation.

A biologist counted 100 black bears in a state park in 1999. The population of the bears grows at a steady exponential rate of 5%. If the population growth continues at the same rate, how many black bears will be in the park in 2023? Round your answer to the nearest bear.

A school’s population is growing at an exponential rate of 6.7%. The school is considering expanding and building new classrooms due to overcrowding. The school has classrooms for 2,250 students, and right now there are 1,600 students. If the growth rate stays the same, how long does the school have until they run out of space?

We are trying to isolate the variable \(t\), so start by dividing both sides of the equation by 1,600.

Therefore, the school will run out of space in approximately 5 years.

A biologist is studying a cluster of bacteria cells that have a steady growth rate of 60% each day. There are 8,000 bacteria cells in the cluster now. How many cells will there be in the same cluster 7 days from now? Round your answer to the nearest cell.

Therefore, after 7 days there will be approximately 533,491 bacterial cells.

A city currently has a population of 500,000 residents. The city’s population is growing exponentially at a rate of 1.5% each year. Assuming the growth rate stays the same, what will the population of the city be in 3 years? Round your answer to the nearest person.

After 3 years, the population of the city will be approximately 523,014.

by Mometrix Test Preparation | This Page Last Updated: May 13, 2022