Hi, and welcome to this video about piecewise functions! In this video, we will explore

First, let’s look at the definition of a function. A function is a relationship where a single output is assigned to each input.

Many functions belong to function families because their equations and graphs all have similar characteristics.

Piecewise functions are not considered a function family on their own. As the name suggests, they are functions comprised of pieces of other functions.

One way to visualize this is to graph both linear functions and erase the sections that are not part of the absolute value function.

Let’s take a quick break and practice describing a couple of piecewise functions in terms of what their pieces look like and where those pieces are defined.

First up is the greatest integer function, f of x equals the floor of x. This is also called the floor function or stair step function.

This function is made up of pieces of constant functions that are 1 unit wide.

Next, we have the sawtooth function, f of x equals x minus the floor of x. This function is also called the castle rim function.

The format for defining piecewise functions has this general form:

There are two criteria for naming piecewise functions:

Let’s start by rewriting our absolute value function in this form:

Here’s the list of expressions that define each piece from left to right:

Now let’s take a minute to consider the domain of each piece.

f of x equals the absolute value of x has a domain of all real numbers. We can input any number we want and get a single output.

But, we have to be careful with our piecewise definition when we consider x=0. Why? Because 0 is a defined point on both pieces, but we only need to include it once.

f of x is equal to the subset of negative x when x is less than zero and x when x is greater than zero
then neither piece includes 0 and the domain is incomplete.

then we are not defining a function, because we’re saying that f(x) equals both -x and x at x=0 (even though the output would technically be the same in this case).

Since 0 is in the domain of both pieces, we simply choose which piece to put it in. Both of these equations correctly define the function:

All of our examples so far have depicted piecewise functions with domains of all real numbers. The pieces do not need to connect and they do not need to extend to plus or minus infinity.

Take a look at this function and try to define it with an equation (and yes that single point is a part of it!):

Like other functions, piecewise functions can be used to tell stories. This is the story of a car journey Bob took last week:

Let’s see how many of these review questions we can answer about Bob’s journey before we go:

The following piecewise function shows the speed of a car as a function of time. Daniel says that the flat top portion of the graph shows that the car came to a stop. Is Daniel correct? 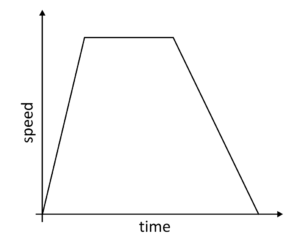 Even though the flat piece of the graph seems to show the car stopping, the speed is maintained as time is passing.

What kind of piecewise function is graphed below? 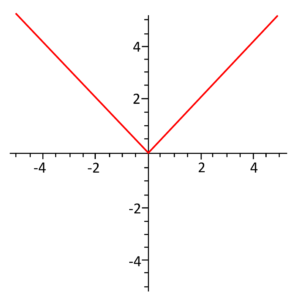 An absolute value function will form a V shape. This type of function is essentially two “pieces” of linear functions. 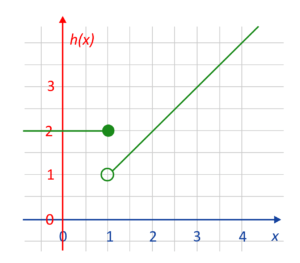 The graph below shows the relationship between time in minutes (\(x\)-axis) and water in gallons (\(y\)-axis). The graph shows the amount of water that was used (in gallons) when George gave his new puppy a bath.

When did George turn the water faucet off? How much water was in the bath when he bathed the puppy? 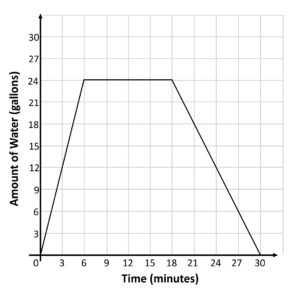 George turned the water off at 30 minutes. There were 24 gallons of water in the tub when he bathed the puppy.

George turned the water off at 12 minutes. There were 18 gallons of water in the tub when he bathed the puppy.

George turned the water off at 6 minutes. There were 24 gallons of water in the tub when he bathed the puppy.

George turned the water off at 24 minutes. There were 6 gallons of water in the tub when he bathed the puppy. 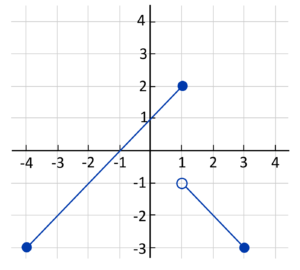