Nouns are one of the most common types of words that we use in sentences every day, whether it be in conversations with friends or writing an essay for class. In this video, we’ll be taking a look at all of the different types of nouns and how they function in sentences, and we’ll also see how nouns and pronouns work together to make sentences flow smoothly. Let’s get started!

Nouns are words that name a person, place, thing, or idea. For example, sister and Lindsey are people, school and Halsted Street are places, puppy and tree are things, and happiness and energy are ideas, so all of these words are nouns!

Nouns can be broken down even further into different categories depending on what the noun is doing in the sentence.

Common nouns, like these, are words that refer to general people, places, things, and ideas. This means that a common noun is not given a specific name or title like John or Eiffel Tower (we’ll talk about names a little later on). Here’s an example of a common noun used in a sentence:

Dinner was ready at 6 pm.

The common noun used in this example is dinner, which, in this case, is a thing. Let’s look at one more.

The doctor told her that biking through the park would be good exercise.

This sentence has multiple common nouns, for example, doctor and park. In this case, these common nouns are a person and a place. Seems simple enough, right?

Rachel was driving to Arizona in her brand-new car.

There are two proper nouns in this sentence: Rachel and Arizona. These are specific names of a person and a place, and they are both capitalized. The word car, on the other hand, is a common noun since we’re not mentioning the car by a specific name or title.

Now, take a look at these two sentences:

Brayden’s dad always leaves for work at 7:30 am.

Kiera, do you know what Dad is making for dinner?

The word dad is used in both of these sentences, but notice how it’s capitalized in one sentence and not capitalized in the other. Why is that? Well, in the first sentence, dad is a common noun, meaning we aren’t using dad as a specific name or title. In the second sentence, dad is used as the name of a specific person, so it is considered a proper noun.

Now, as you might expect, nouns can be singular or plural. Just as it sounds, a singular noun describes a single thing, while a plural noun refers to multiple things.

There are a few different ways to make a singular noun plural, depending on what letter the noun ends with. The general rule is that you add an s to the end of a noun to make it plural, like in the words bat, car, and table.

If a word ends with y, there are two different rules to keep in mind. If the letter before the y is a consonant, you remove the y and add -ies to the end.

For instance, to make the word city plural, you would replace the y with -ies because the letter before the y is a consonant, t. If a vowel precedes the y, then you simply add the letter s to the end.

There are also two different rules to follow if a noun ends with o. If the letter before the o is a consonant, you add -es to the end to make it plural.

If the letter before the o is a vowel, you simply add the letter s to the end to make it plural.

If a noun ends with f or fe, you need to change the ending to -ves. This means that half becomes halves and knife becomes knives.

Now, as with all rules, there are definitely exceptions to all of these we’ve just discussed. For instance, the plural of child is not childs (it’s children), and the plural of tooth is not tooths (it’s teeth). These are examples of what we call irregular plurals.

Since there is no hard-and-fast rule for these plurals, you’ll need to memorize them as you come across them.

Now that we know all about singular and plural nouns, let’s move on to possessive nouns.

Possessive nouns are nouns that describe ownership of something. We show ownership by adding an apostrophe and an s to the end of a singular noun and only an apostrophe to a plural noun that ends with s.

Take a look at this example:

In this sentence, we see three nouns but only one of them is possessive. Mom’s is the possessive noun because the car belongs to her, not Liz.

Nouns that don’t refer to humans or animals can also be possessive.

The trees’ leaves began to turn orange and red as the summer ended.

A class of students

A flock of birds

A team of players

A crowd of fans

All right, now that we’ve discussed several different types of nouns, let’s move on to pronouns.

Pronouns are words that take the place of nouns. In other words, pronouns can describe a person, place, or thing without you having to name it multiple times in the same sentence or paragraph, which alleviates unnecessary repetition. The noun that the pronoun is replacing is called the antecedent. 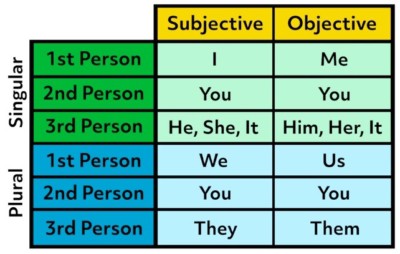 These are pronouns that are used to refer to people. For example, instead of saying “When Tina walked in the house, Tina took off Tina’s shoes,” you could use the pronouns her and she to replace the noun Tina:

When Tina walked in the house, she took off her shoes.

Just like nouns, pronouns can be used to show possession; we call these “possessive pronouns.”

Take a look at this sentence:

In this example, the possessive pronoun hers is replacing the noun notebook. If we had not used a pronoun here, we would have said “It looks like this notebook is her notebook,” which is a bit repetitive.

Demonstrative pronouns are used to refer to specific things that are either near or far away.

Interrogative pronouns are used to refer to nouns in the form of a question.

Who invented the microwave oven?

Once again, it’s important not to confuse interrogative pronouns with interrogative adjectives. If I say “Whose jacket is this?” the word whose is not a pronoun—it’s an adjective. For whose to be a pronoun, I would have to say “Whose is this?” In that case, it’s a pronoun because it completely takes the place of the noun jacket.

Indefinite pronouns are used to refer to non-specific people, things, or amounts.

Take this sentence for example:

Anybody can learn another language.

In this case, the indefinite pronoun is anybody because it refers to an immeasurable amount of people.

Okay, we’ve discussed a lot about nouns and pronouns, so let’s go over a few review questions before we go.

1. What kind of noun is Tuesday?

The word Tuesday is a specific name, so it is a proper noun.


2. Which of the following singular nouns was pluralized incorrectly?


3. Which word in the following sentence is an objective pronoun?
She caught them cheating on their homework assignment this morning.

The word them is an objective pronoun because it acts as the direct object of the sentence. The word she is a subjective pronoun in this sentence, while their and this are both adjectives.


4. Which of the following sentences contains an interrogative pronoun?

The correct answer is A!

All right, that’s all for this video! Thanks for watching, and happy studying! 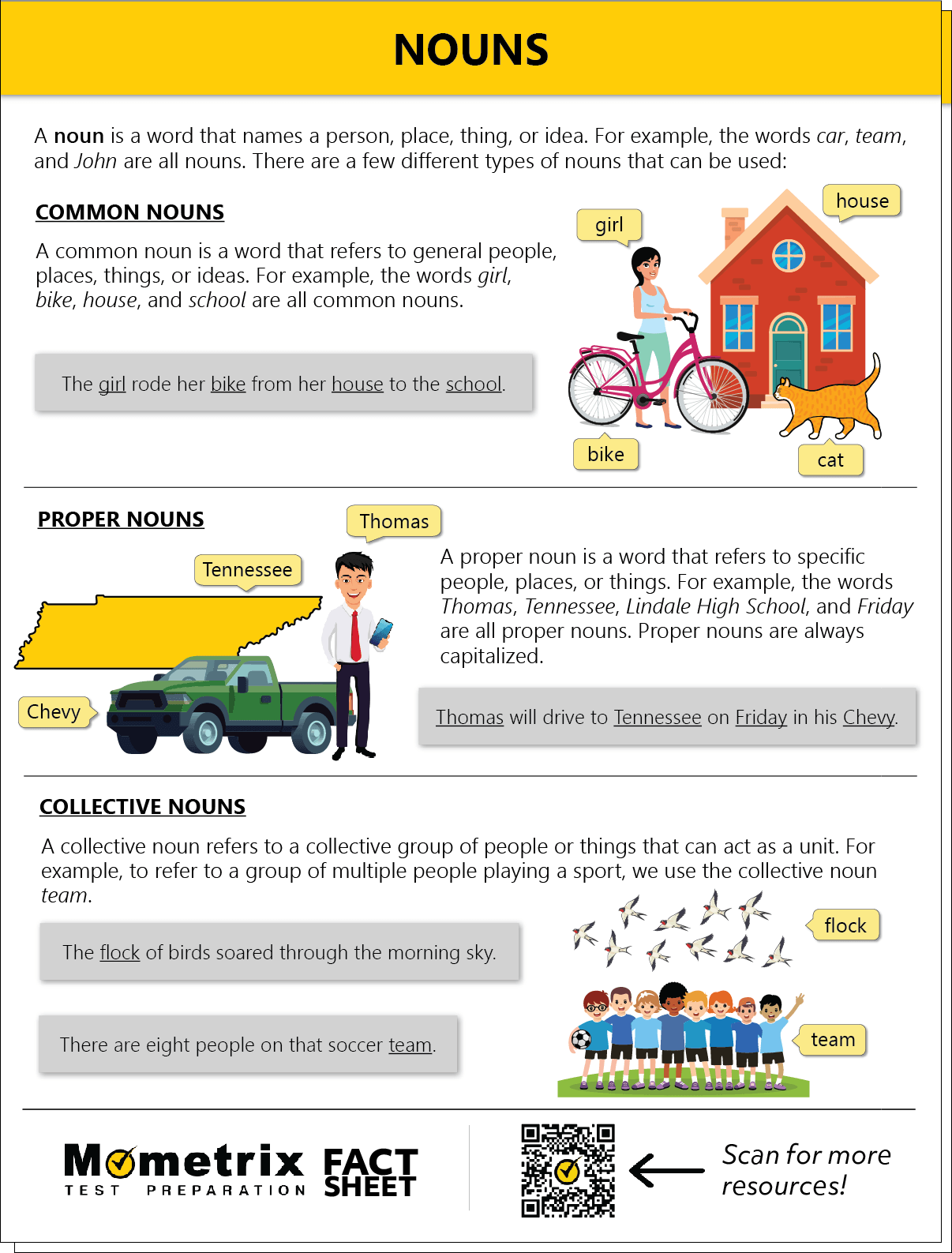 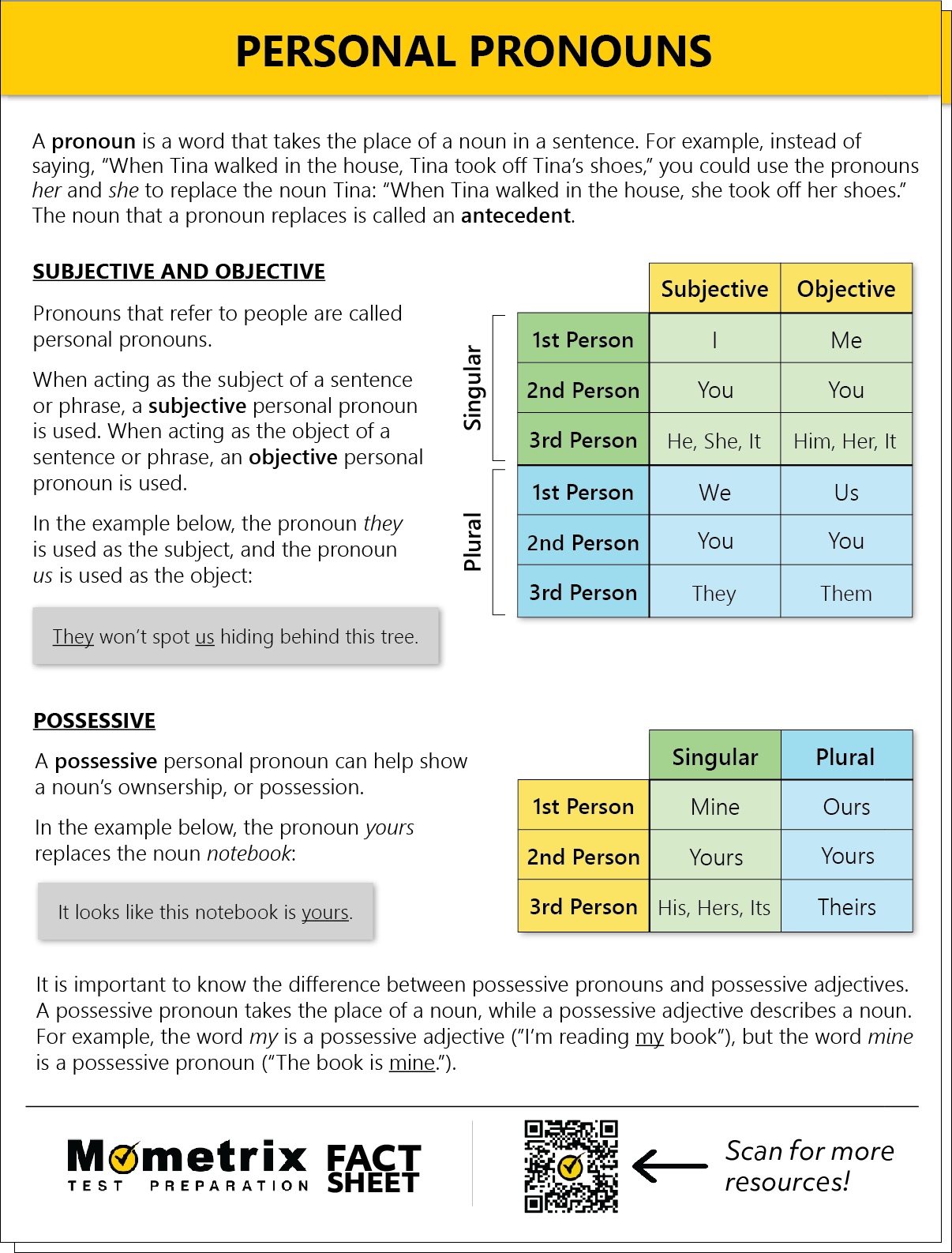 Which of the following nouns represents the correct plural form of the word wrench?

Since the noun wrench ends with the ch, it is made plural by adding es to the end.

Fill in the blanks:

The bright blue hue belongs to the sky, so the word sky needs to become possessive, which is formed by simply adding ‘s to the end. The word nail is not possessive in this case but is plural, so an s is added to the end.

Select the correct capitalization for the underlined nouns:

Which word is the collective noun in the following sentence?

The class of junior high students left their papers in the auditorium.

Fill in the blank:

This sentence is referring to the cores of multiple apples, so the plural possessive apples’ should fill in the blank.

Fill in the blanks:

Fill in the blank:

The crowd made _____ way to the auditorium just in time for the recital to begin.

The word crowd is a collective noun, which means it refers to a group of people but is itself a singular noun. Because it is singular, the pronoun its should be used here.

The words other, nobody, anybody, and none are examples of which type of pronoun?

Indefinite pronouns represent a person or thing that we don’t have a specific number of.

Which of the following is a reciprocal pronoun?

Reciprocal pronouns indicate that two or more people are carrying out an action at the same time.

What two types of pronouns are found in the following sentence:

I myself prefer biking over running.