Hi, and welcome to this video on mitochondria! Have you ever wondered how the body makes energy from the food we eat? The digestive system, at a macroscopic level, breaks down food physically and chemically, but how do cells use that food for energy? It all happens in the mitochondrion. In this video, we’ll talk about some of its properties, its functions, and some larger roles it plays in the body.

So, to start off, what exactly is a mitochondrion? It’s a specialized organelle found in eukaryotic cells that primarily generates adenosine triphosphate (ATP) by oxidizing glucose and fatty acids. In other words, the mitochondrion is the energy producer for the cell. Mammalian cells have hundreds of thousands of mitochondria per cell, but this number can change based on the specific role and energy needs of the animal’s cells. This goes so far as to be tissue-specific, so tissues that might require more energy, like cells in the digestive tract, will have more mitochondria compared to other cells in that mammal’s body.

Since we said that eukaryotes have mitochondria, it’s important to note that this goes for plant cells, too. While we know that plants make their own glucose through the process of photosynthesis, plants still need mitochondria to convert glucose into usable energy. 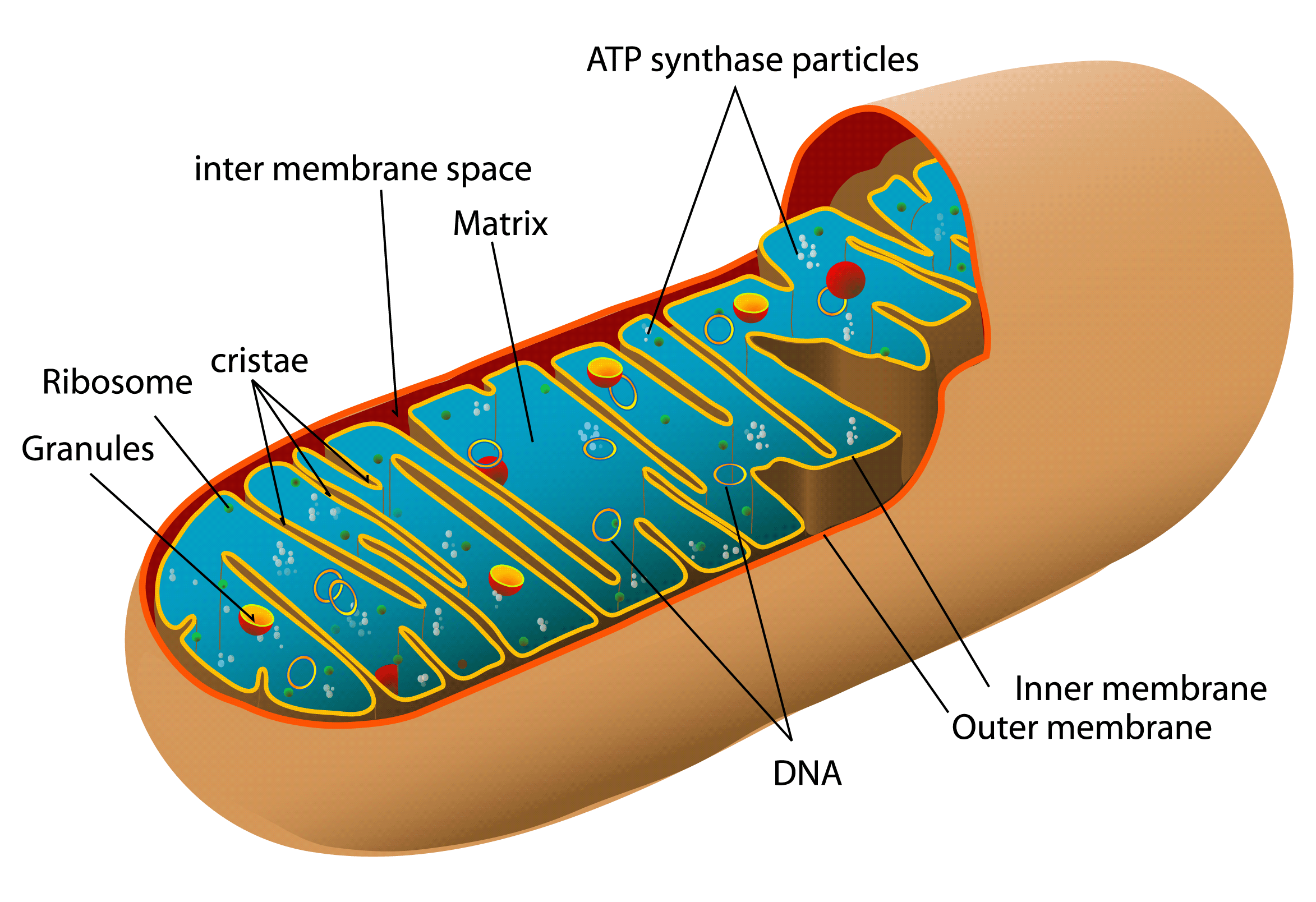 What does the mitochondria do?

Primarily, we think about mitochondria metabolically as it converts pyruvate into ATP to carry out cellular respiration. Remember that glycolysis takes the glucose from the food we eat and converts it into pyruvate in the cytoplasm. So we have two molecules of pyruvate, but we haven’t generated any energy yet. This is where the mitochondrion comes in. Those two pyruvate molecules enter the mitochondrial matrix and bind to Coenzyme A to form acetyl Coenzyme A. The acetyl CoA is now ready to enter into the citric acid cycle, or the Krebs cycle as it’s sometimes called. This cycle occurs in the inner membrane space. Acetyl CoA undergoes a series of oxidation-reduction reactions with NAD+ and FAD to form NADH and FADH2 respectively.

Now we are entering the last two stages of the metabolic process known collectively as oxidative phosphorylation because the molecules involved are oxidized and phosphorylated. The first stage is known as the electron transport chain. The electron transport chain is made up of a series of transmembrane proteins in the inner membrane that will transfer the electrons stored in NADH and FADH2 to the intermembrane space to generate a proton motive force needed by ATP synthase in the last stage of the process. Also remember that cellular respiration is an aerobic process because the electron transport chain requires oxygen, specifically to reduce it to H2O. The final stage of oxidative phosphorylation is known as chemiosmosis. The protein complex known as ATP synthase uses the stored energy from the proton motive force to generate ATP molecules. Mitochondria can also oxidize fatty acids to generate ATP in a similar way. So in the end, this is how mitochondria contribute to the production of cell energy.

New research has suggested that mitochondria also have a role in stem cell differentiation. Like we said in our discussion of the mitochondrion’s metabolic functions, the inner membrane and the matrix are home to lots of proteins that contribute to the organelle’s function. We’ve recently found that certain proteins are present at a higher level in the mitochondrial membranes of pluripotent stem cells. These types of stem cells have the capacity to differentiate, or change, into a variety of final cell forms. For example, pluripotent stem cells have a higher amount of a protein called uncoupling protein 2. This protein increases the metabolic rate of the organelle, or in other words, increases the rate of glycolysis. However, as those pluripotent stem cells begin differentiating into other cells, uncoupling protein 2 levels decrease causing energy metabolism to slow down. The state of the stem cell, such as whether or not it’s differentiating, determines the amount of uncoupling protein 2 present.

Research has also suggested that the shape and state of mitochondria can vary. Remember when we were discussing oxidative phosphorylation, which is what we call the last two stages of metabolism combined? Well-developed, elongated mitochondria have been found to predominantly undergo oxidative phosphorylation, while energy production via glycolysis occurs with mitochondria that are more spherical in shape. The shape of mitochondria also indicates the age or maturity of the organelle (elongated is mature). When specialized, mature cells are returned to pluripotent stem cells, or reprogrammed, and the mitochondria become elongated. After cells are re-differentiated, mitochondria shift to the immature, spherical state.

When a cell is under stress of some kind, whether it’s environmental stress, DNA damage, or if it has been subject to reactive oxygen species (abbreviated ROS), cells will undergo a kind of controlled cell death called apoptosis. This programmed cell death is highly regulated by mitochondria in mammals. There are a couple of proteins we need to keep in mind here: Bcl-2 and Cytochrome c (abbreviated cyt c). Both of these proteins are involved in the signaling pathway to cause a cell to die, and both are located within mitochondria. Bcl-2 proteins are located in the outer mitochondrial membrane and begin the apoptotic process. Normally, Bcl-2 is responsible for maintaining the outer mitochondrial membrane and keeping it impermeable to Cytochrome c. However, when a cell receives stress signals, Bak and Bax proteins associate with Bcl-2 and start to make the outer mitochondrial matrix more permeable to Cytochrome c so that it can be released into the cytoplasm of the cell. Cytochrome c is responsible for activating Apaf-1, which activates a series of caspase proteins. These caspases are proteases, meaning they will degrade proteins and cause the cell to lose its integrity.

Ok, now that we’ve gone over what a mitochondrion is and what it does, let’s look at a review question to see what you remember:

Which of the following are properties of mitochondria?

The correct answer is E.

What is the mitochondria?

The mitochondrion (pl. mitochondria) is a specialized double membrane bound organelle found in all eukrayotic organisms.

What does the mitochondria do?

Do plant cells have mitochondria?

Do prokaryotes have mitochondria?

Prokaryotes do not have mitochondria and thus must rely on other processes to obtain energy, such as using the electron transport chain.

Do bacteria have mitochondria?

Bacteria are considered prokaryotic and thus do not have mitochondria.

Where is the mitochondria located?

Mitochondria are located in the cytoplasm of almost all eurkaryotic cells (erythrocyes, or red blood cells, are an example of a type of cell that does not have mitochondria).