Before we dive in, let’s quickly review what a linear equation is.

Remember that a linear equation describes a straight line on a graph. They generally look something like this: y equals mx plus b y=mx+b. The slope of the line is represented by m, and the y-intercept is represented by b. X and Y simply represent an ordered pair that would fall on the graphed line for that equation. Here is an example of a linear equation and the graph to match.

Remember that slope represents rise over run. So a slope of positive 3 represents a rise of 3 and a run of 1 (up 3 and over 1).

This example was already set up in what’s called slope-intercept form. However, not all of the linear equations you work with will be conveniently set up this way. Sometimes you will need to manipulate the equation in order to get it into slope-intercept form. This process needs to occur before you can begin graphing.

In order to isolate the variable y, we need to get rid of the term negative 2x. -2x. To do this we use inverse operations. The inverse of negative 2x is positive 2x. So we add 2x to both sides and we get 2x plus 4 equals y. If we reverse our equation we get y equals 2x plus 4.

Now the linear equation is in slope-intercept form (y equals mx plus b y=mx+b). It is now graphable because we have isolated the variable y.

Both equations are graphed, and the lines intersect at the point (2,2). That means that the ordered pair (2,2) is our solution for the system of equations.

How to Solve Linear Equations

The three common strategies that are used to solve systems of linear equations are graphing, substitution, and elimination. Let’s focus first on the graphing method. This method has three main steps.

Step 1 is to manipulate both equations so that they are in slope-intercept form (y=mx+b).

Step 2 is to graph both equations.

And Step 3 is to identify the ordered pair where the lines intersect.

Let’s take a closer look at these three steps with an example.

Remember, to solve this system, we need to figure out where the lines intersect when they’re graphed.

Let’s try the three steps together.

Step 1 is to manipulate the equations so that they are both in slope-intercept form. For this example, both equations are already set up in this form, so we are ready for step 2.

Step 2 is to graph both equations. Let’s look at the first equation y equals negative 3x minus 7 y=-3x-7. The value -3 represents the slope of the line, and the value -7 represents the y-intercept. With these two pieces of information we are able to build a line.

Now we have both equations graphed, so we’re ready for Step 3. Let’s locate the ordered pair where the lines meet. The graphing method is a convenient strategy visually, because we can see exactly where the lines cross. We can clearly see that the lines intersect at the point (negative 4,5) so the solution for this system of linear equations is (negative 4,5).

Let’s try a tougher example where the equations are not already given to us in slope-intercept form. For this example we’ll use the system 3x minus y equals 4 3x-y=4 and 7x plus 2y equals 18 7x+2y=18.

First, we need to manipulate both equations so that they are in slope-intercept form (y equals mx plus b). Let’s start with the first one:

At this point we have two equations that are both in slope-intercept form. Equation 1 is y equals 3x minus 4 and equation 2 is y equals negative 3.5x plus 9.

Now we just need to graph both lines and determine where the lines intersect. Here is what our graph will look like.

The system of linear equations is solved when you can identify the ordered pair where the lines intersect. We can see that the lines meet at (2,2).

The second equation appears to be easier to solve for y, so let’s solve for y by using inverse operations and subtracting 2x from both sides. So this gives us y equals negative 2x plus 4. This is step 1.

Step 2 is when we take this value of y, which is negative 2x plus 4, and we plug it into the y of our other equation (equation 1). This is the substitution process. So we have 3x plus 5, times, negative 2x plus 4 equals 13.

Another way to solve systems of equations is using what’s called the elimination method. For this method, you first need to manipulate the equations so that the variables are on one side, and the constants are on the other.

Using inverse operations, the first equation becomes x minus y equals 5 and the second equation looks ready to go as-is. Now all of the variables are on one side, and the constants are on the other. The objective of the elimination method is that when you add or subtract the two equations, one of the variable terms will be completely cancel out, leaving us with a much easier equation to solve. For example 5x would cancel out with negative 5x.

Notice that if we multiply all parts of our first equation by 2, the term negative y would become negative 2y. This is helpful because this negative 2y will cancel out with the variable term 2y in the other equation, and eliminating variable terms is our goal.

Let’s try it. We’ll multiply all parts of the first equation by 2. This turns this equation in to 2x minus 2y equals 10.

We manipulated the equation in this way because now we are set up for the term negative 2y and 2y to cancel each other out when the two equations are added together. The variable will be eliminated, and this will leave us with a simpler equation to solve. We chose to add the two equations, and not subtract them, because the goal is elimination. If we add the equations, the terms cancel out. If we subtracted the equations, we would still be left with negative 4y. So let’s write this equation over here. 2x minus 2y equals 10, and we’re going to add the equations together. When the 2y and the negative 2y cancel out, we are left with: 3x plus 2x is 5x, equals, 5 plus 10, is 15. Now, what we want to do is divide both sides by 5 and we get x is equal to 3.

Now that we know that x is 3, we are halfway done. In order to find y we simply plug in our value of x into one of our equations, and solve for y.

X = 3 So let’s plug 3 into the equation x minus y equals 5, subtract 3 from both sides, gives us negative y equals 2 and divide by negative 1.
y equals negative 2

Let’s use inverse operations to solve for y.

This means that the solution to the system is (3, negative 2).

Okay, before we go, let’s quickly review what we learned:

Linear equations describe a straight line on a graph, and are usually seen in slope-intercept form, y equals mx plus b. We can solve systems of linear equations by using one of three methods. When using the graphing method, you first manipulate both equations so that they are in slope-intercept form, then graph both equations and identify the ordered pair where the lines intersect. The substitution method works by taking one of the equations, solving for one of the variables, and then plugging the solved variable into the other equation. When using the elimination method, you either add or subtract the equations to eliminate any one variable from the equations. 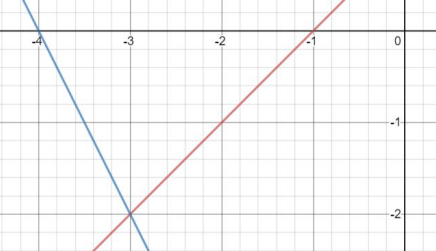 The correct answer is (2, 5).
Step 1: Make sure both equations are in slope-intercept form. To do this, start by using inverse operations to isolate the variable y in both equations. For the equation \(x+y=7\), subtract x from both sides. For the equation \(-2x+y=1\), add 2x to both sides. This leaves both equations in slope-intercept form.
\(\begin{cases}y=-x+7\\y=2x+1\end{cases}\)
Step 2: Graph each line.
Step 3: Locate the point where the two lines intersect. In this case, the two lines intersect at the point (2, 5). 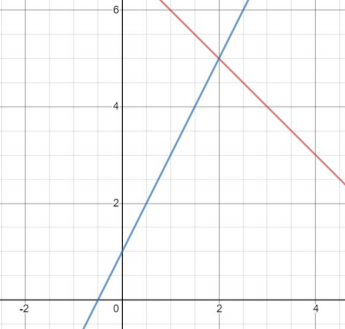 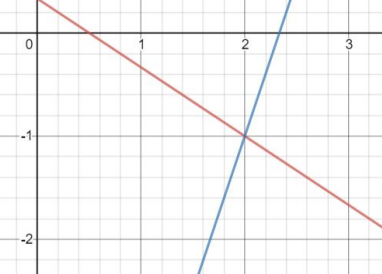