What is an Isotope?

Hi, and welcome to this video on isotopes.

Let’s jump right in with a definition:

Isotope: various forms of the same element that have an equal number of protons (and therefore the same atomic number) but differing numbers of neutrons in their nuclei, and therefore have different atomic mass but not chemical properties (a common example would be a radioactive form of an element).

As of now, all 81 elements have at least one isotopic form. There are currently 275 isotopes of the 81 stable elements, which does not include the over 800 unstable and radioactive isotopes.

Let’s take a look at some examples.

Carbon atoms exist naturally with 6, 7, or 8 neutrons. Since each atom of carbon has 6 protons, the isotopes must have atomic masses of 12, 13, and 14. (Since atomic mass = mass protons + mass neutrons)

Hydrogen is unique in that it’s the only element whose isotopes have alternative names. Let’s take a look: 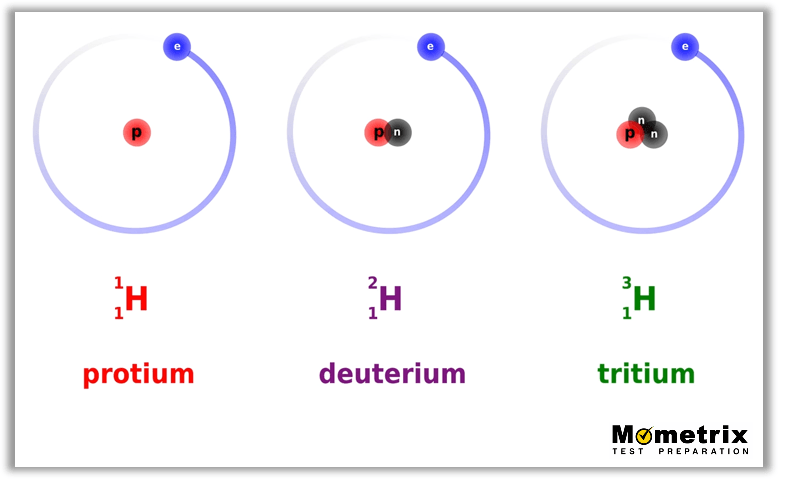 I hope that helps! Thanks for watching this video lesson, and until next time, happy studying!

What is an isotope?

Isotopes are two atoms of the same element that have different mass. They have the same number of protons but a different number of neutrons. Even though there are differences in the nucleus, the behavior and properties of isotopes of a given element are identical.

What is a radioactive isotope?

A radioactive isotope, or radioisotope, is an unstable isotope that releases excess energy and particles through the process of radioactive decay.

How do you find isotopes?

Isotopes can be found by subtracting the atomic mass from the atomic number, or number of protons the element has.

How do you write isotopes?