What is an Ionic Bond?

Hi, and welcome to this video on ionic bonding- one of the three primary ways in which atoms combine to form bonds.

Let’s start by considering why two atoms bond in the first place. Alone, their aggregate energy is here. But when they get close together, their combined energy drops. 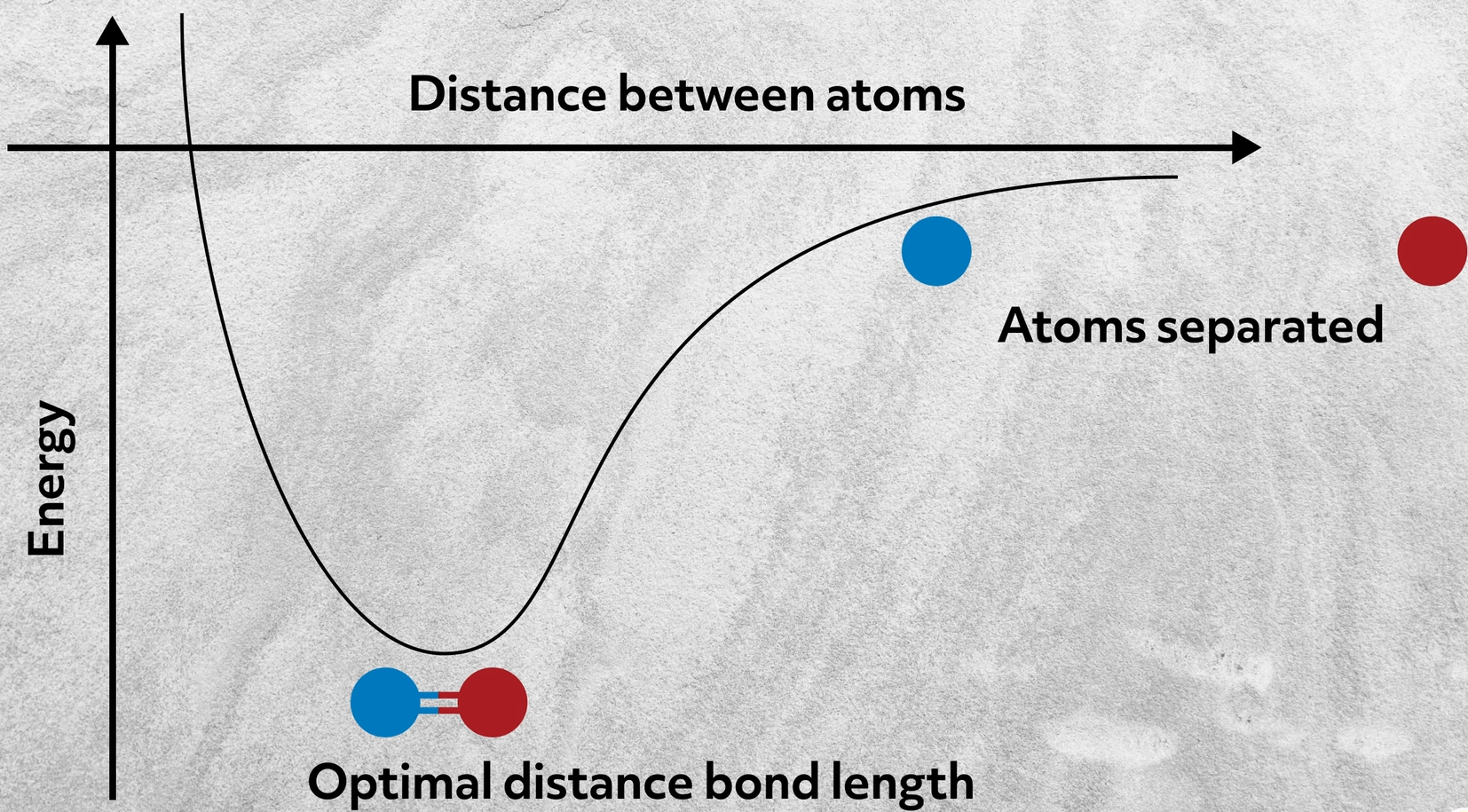 This happens because the two atoms form a bond by sharing their valence electrons with each other. How and the extent to which they share those electrons determines the type of bond. Bonds, like most things, exist on a spectrum; so let’s consider the various ways in which atoms can interact. 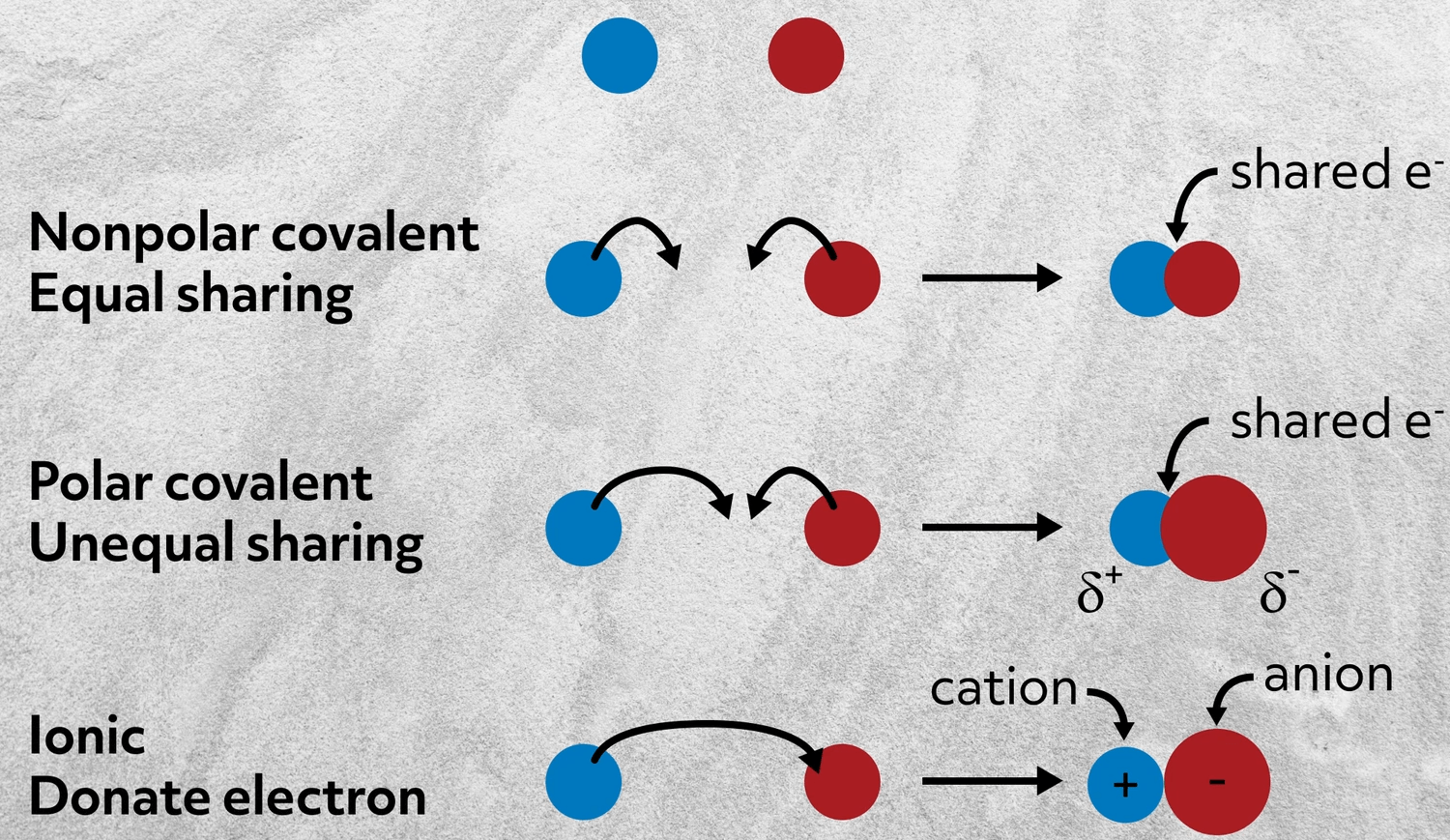 Let’s start by imagining two atoms that don’t interact at all. There’s no bond because there’s no energetic advantage to them sharing electrons. This is how two noble gas atoms would interact.

Next, imagine two atoms that both donate electrons and share them equally to form a bond. This is a nonpolar covalent bond, like in Cl2.

Now, imagine that one of those atoms has a stronger pull on the electrons than the other and the electron density is then unequally shared. This is called a polar covalent bond, like in carbon monoxide: CO.

And lastly, imagine where one atom pulls on the electrons so much that rather than sharing electron density, it just takes an electron from the other atom. This is an ionic bond- the focus of this video.

I started with this introduction to put ionic bonds into perspective and to remind you that all chemical interactions are almost always on a spectrum. So while it is useful to learn the details and specifics of ionic bonds, it’s good to remember that these categories blend into each other and form essentially a continuum. The cutoff between what we consider a very polar covalent bond and a weak ionic bond is essentially arbitrary. And even though we talk about an electron being fully donated in an ionic bond, that electron is always slightly shared. But categorization is a useful tool- it’s just good to remember that these things aren’t hard-and-fast categories.

Now that we’ve put things into perspective, let’s actually dive into the specifics of ionic bonds.

As we already stated, ionic bonds are formed when one chemical species donates electrons to another, thus forming two charged particles- a positive cation and a negative anion. These two species are strongly attracted to each other via the electrostatic force.

The donated electrons always come from the valence shell of the soon-to-be cation. The donation results in fully emptying the outer shell of the cation, while filling the valence shell of the anion. This results in both species having noble gas electron configurations, which confers extra stability. Consequently, donating species are metals from the left-hand side of the periodic table (often Group 1A and 2A, which have 1 or 2 valence electrons). Receiving species are nonmetals from the right-hand side of the periodic table (often Groups 6A and 7A, which are 1 or 2 electrons short of having a filled valence shell). 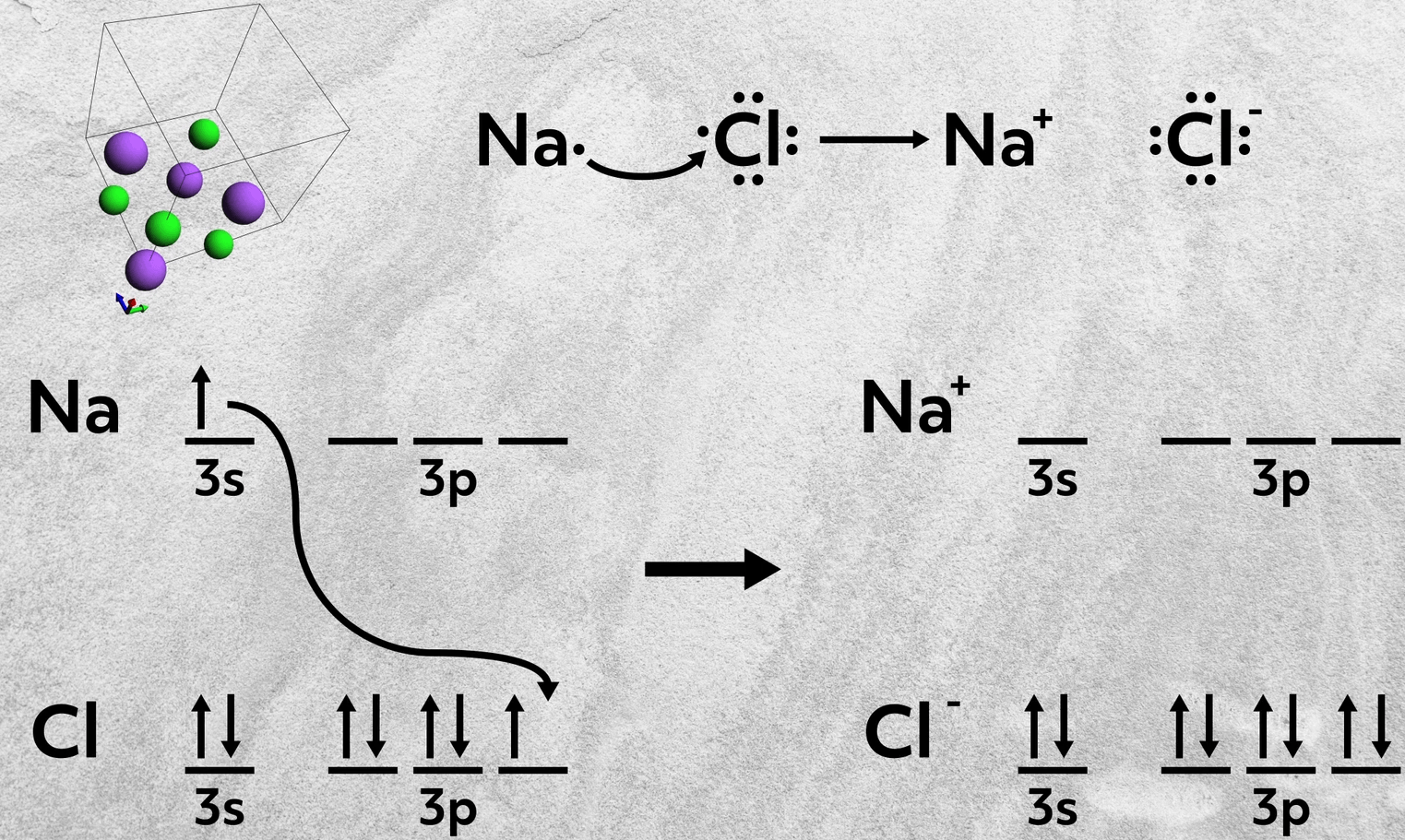 So when you’re trying to determine if a bond is ionic, it’s always helpful to consider where the two elements are from on the periodic table. If they’re from opposite sides, chances are you are dealing with an ionic bond.

If you prefer a quantifiable method, you can use the electronegativities of the two elements. If the difference in electronegativities, ΔEN, between the two atoms is greater than 1.7, the bond is considered ionic. Remember that electronegativity describes an atom’s ability to attract an electron. However, since you may not always have a table of electronegativities in front of you, I encourage you to develop your chemical intuition and not rely just on the numbers.

Thus far, we have only considered the ionic bond between sodium and chlorine, which involves just two atoms and the transfer of 1 electron. However, ionic bonds can be more complex than this.

First, instead of combining a Group 1A and 7A element with just a single electron donated, elements from Group 2A and 6A can also form ionic bonds. In these cases, the Group 2A element donates two electrons to the 6A element. Magnesium oxide, MgO, is one such example, where magnesium donates its two 3s electrons to fill up oxygen’s 3p orbital. 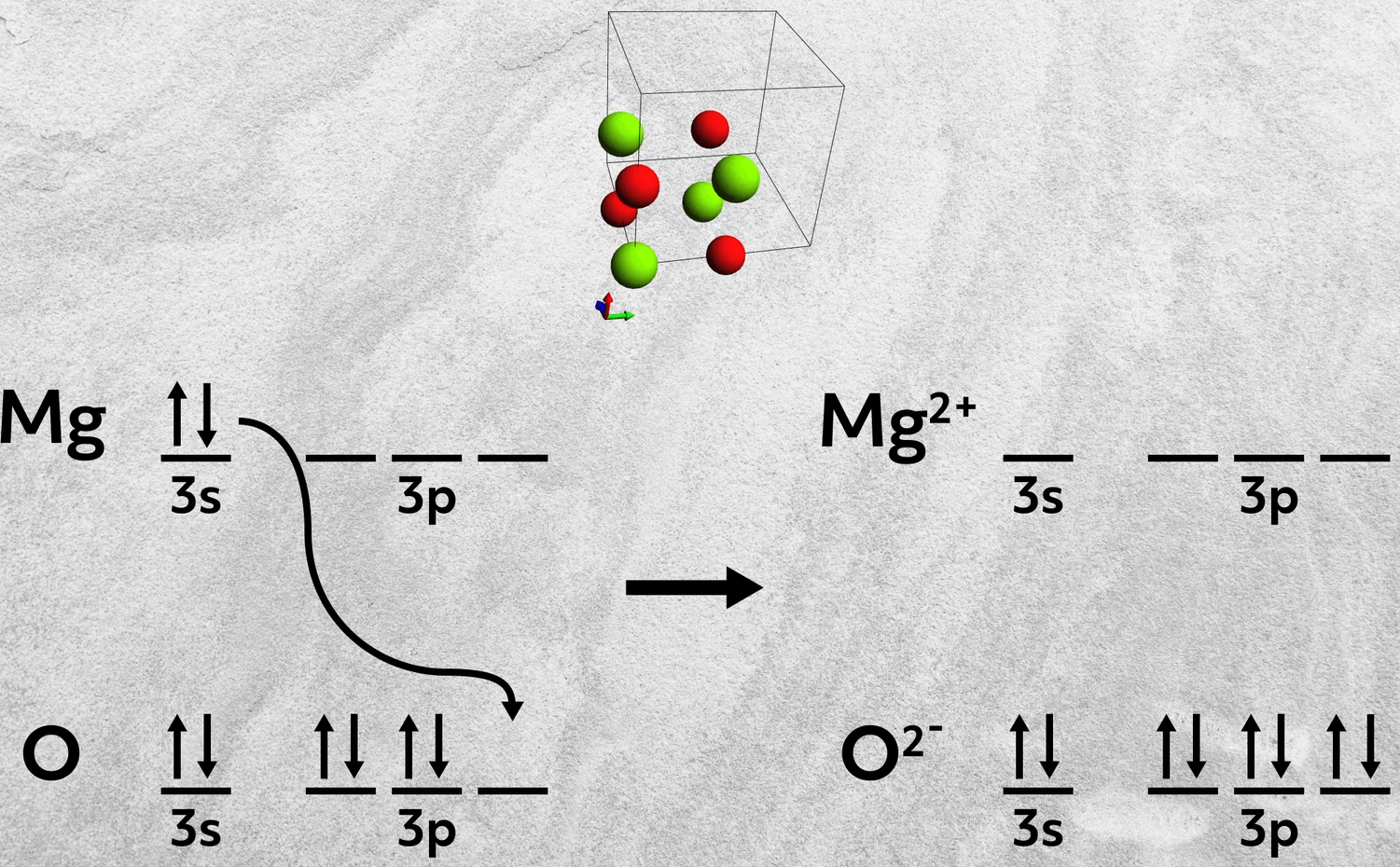 Second, elements from Group 1A can combine with 6A elements. In these cases, two atoms of the Group 1A element are necessary, each one donating an electron to the 6A atom. This happens in the formation of sodium oxide, Na2O, where each sodium donates one 3s electron to fill up the 3p orbital of oxygen. 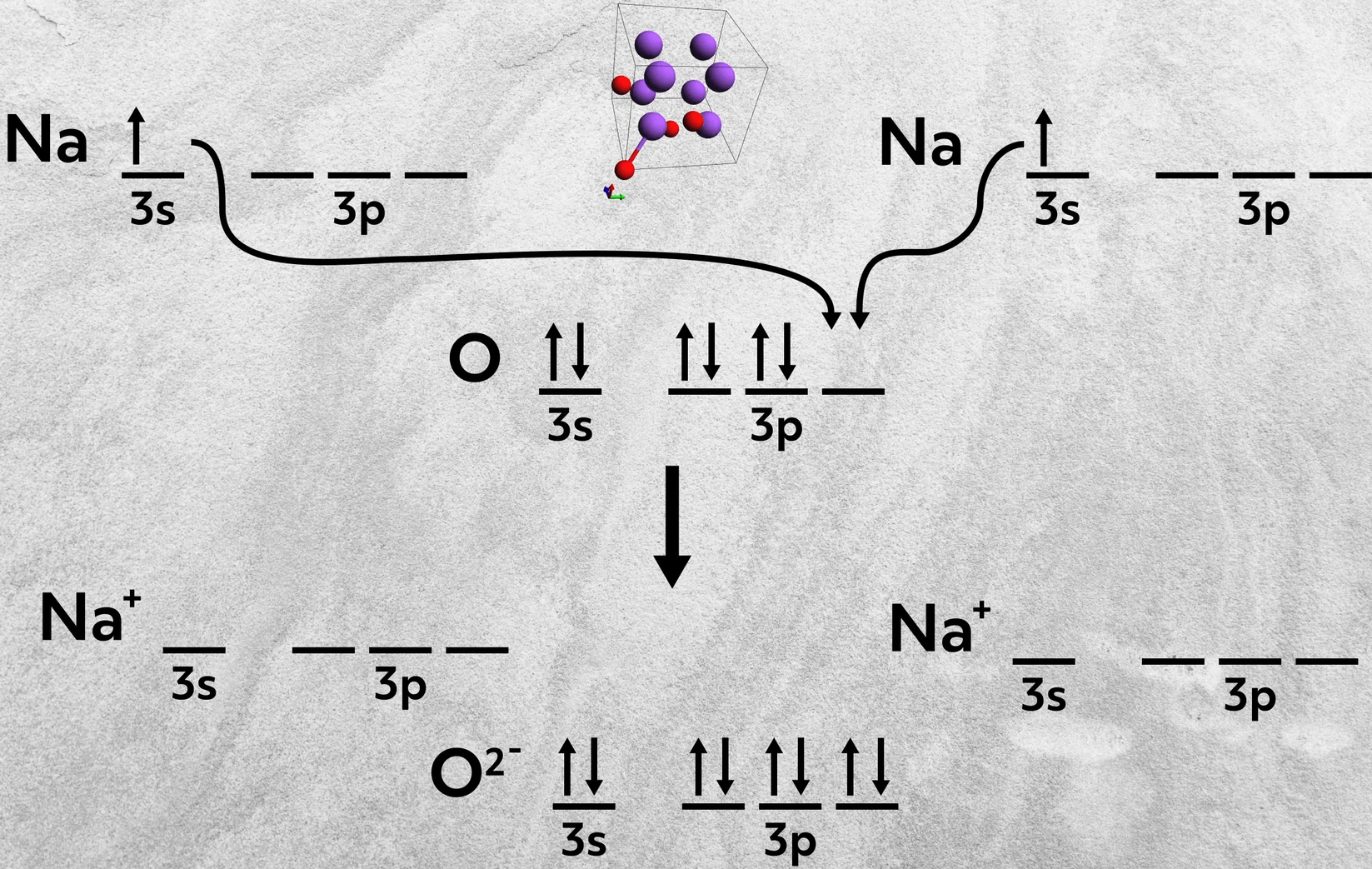 Similarly, a Group 2A atom can combine with two 7A atoms, where the metal donates two electrons, one to each of the 7A atoms. This happens in the formation of calcium chloride, CaCl2, where the calcium donates its two 4s electrons to fill up the 3p orbital of each chlorine. 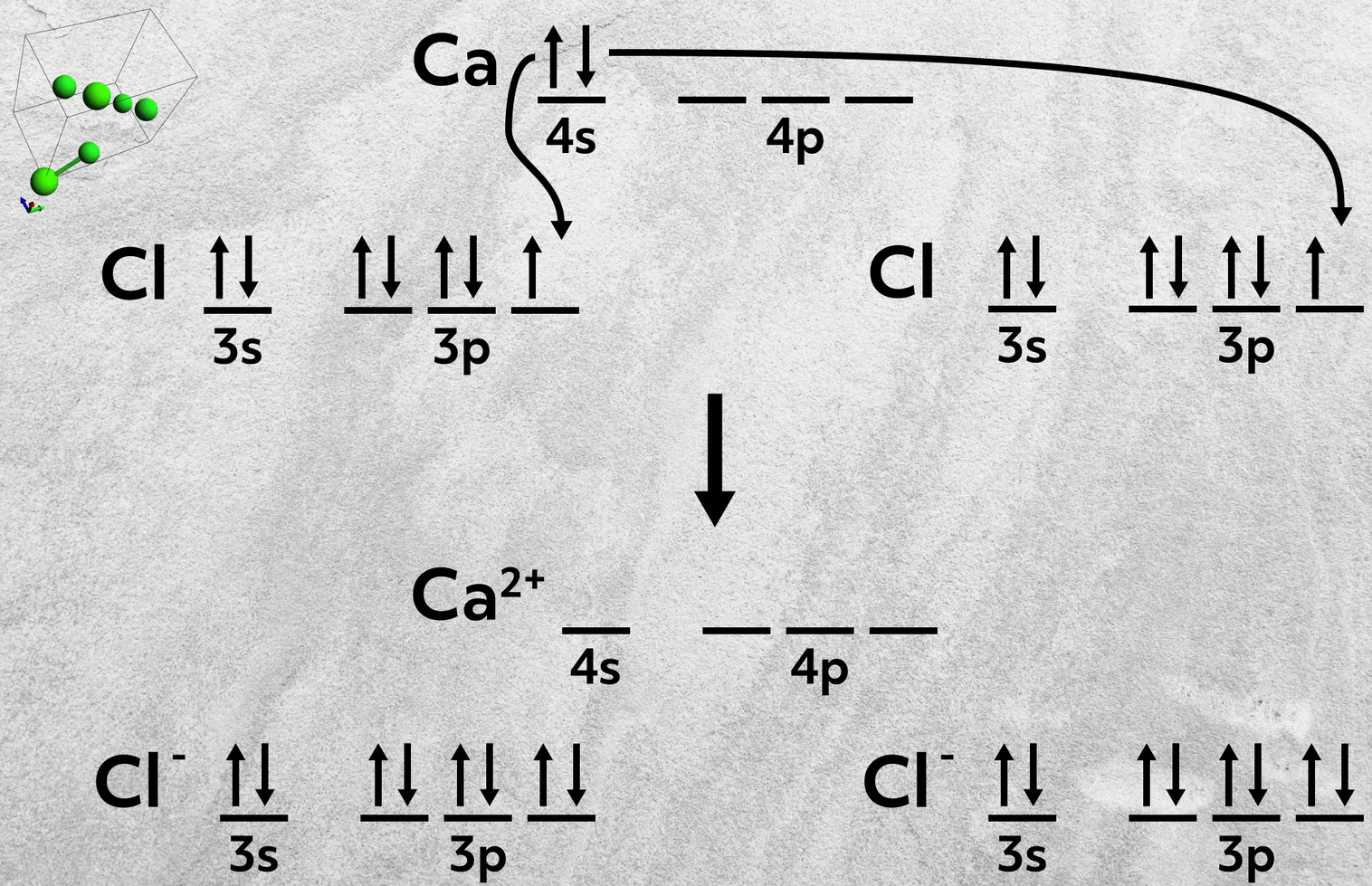 Of course, there are other combinations that produce ionic compounds involving atoms from other periodic groups. The ones we went over are just the most common.

I also want to point out that ionic bonds can even form between covalently bound molecules that carry a charge- called polyatomic ions.

Polyatomic ions are common, and it’s important to remember that while they form ionic bonds with ions of the opposite charge, the internal bonds of the polyatomic ion are covalent. So for example, in sodium bicarbonate, or baking soda, the sodium donates an electron to the bicarbonate molecule to form an ionic bond. But, the bonds between the oxygens, carbon, and hydrogen that make up the bicarbonate ion are covalent.

And remember- it’s unstable for bulk materials to carry a charge- so make sure when you’re forming an ionic bond that the positive charge of the cation balances the negative charge of the anion. It’s useful to track the transfer of electrons using partial orbital diagrams like we did in our examples, to make sure you’re not losing or gaining electrons and maintaining an overall neutral charge.

To this point, we’ve been considering the single ionic bond between isolated ions. However, as you might already be aware, ionic compounds rarely exist as single molecules. Instead, they aggregate into large crystalline structures- an organized, repeating 3D structure. This maximizes the interactions between oppositely charged particles. So going back to sodium chloride, rather than interacting with 1 ion, like in a single ionic bond, each ion is surrounded by multiple ions of the opposite charge. The energy released from those collective interactions is called the lattice energy. 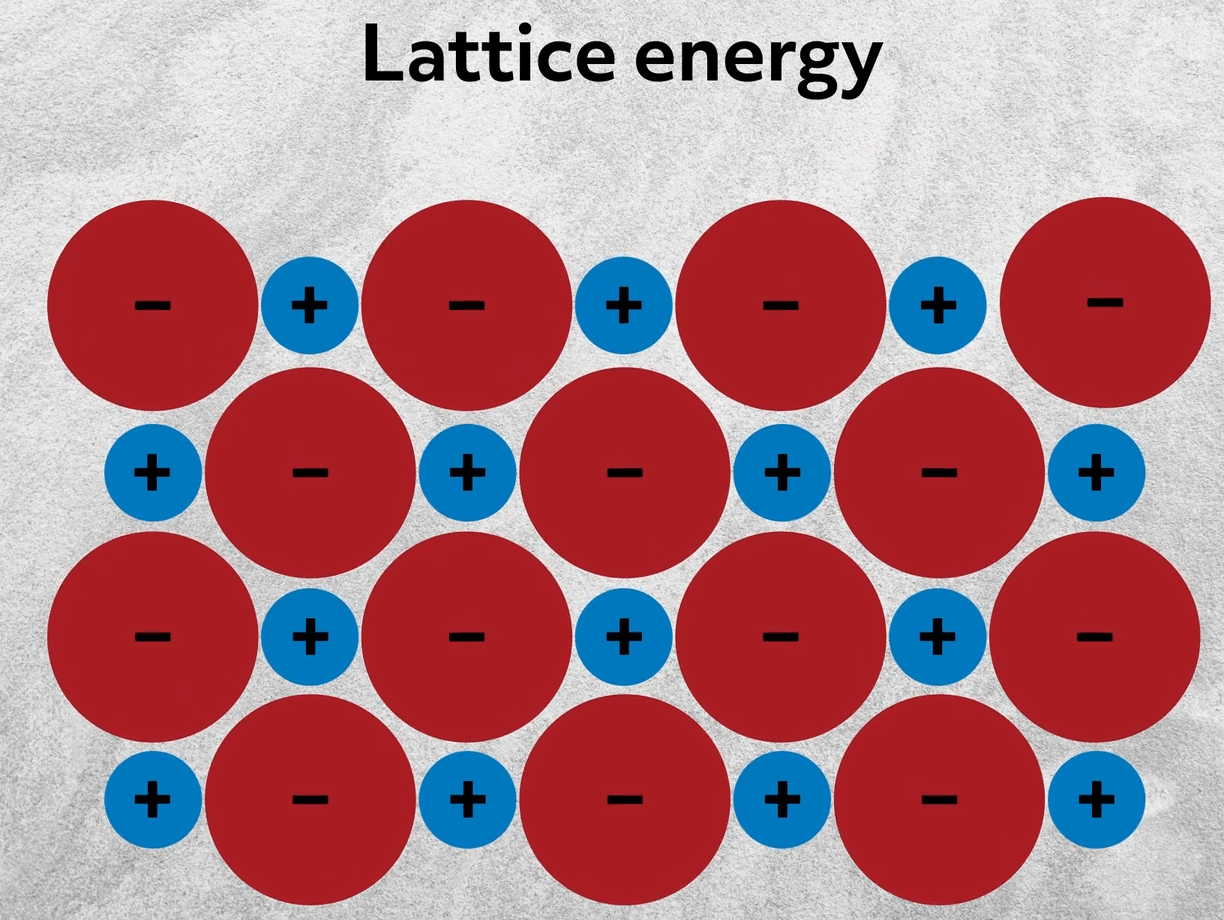 The formation of ions is energetically costly, since you have to break bonds and move electrons. Nonetheless, ionic compounds are formed because that energy cost is ultimately outweighed by the lattice energy. The lattice energy increases with increasing charge and smaller ions. In other words, the lattice energy is directly proportional to the electrostatic energy as described by Coulomb’s Law.

So, when we talk about ionic bonds, we are almost always going to be talking about the associated ionic solid because we very rarely ever form a single ionic bond. This is also why chemists don’t refer to compounds formed through ionic bonds as molecules because they don’t exist as single discrete units.

Furthermore, we can use our understanding of the ionic bond and resulting crystalline structure to explain the bulk physical properties of ionic compounds.

Most ionic compounds are solid at standard temperatures and pressures because of the strict crystalline structure of the ions. They are often hard, rigid, and brittle, meaning that they don’t dent or bend, but do crack without deforming. If you consider the arrangement of ions, this makes total sense. Imagine trying to slightly shift the ions – you may realign them with like charges, which would be wildly repulsive. If you did apply enough force to shift the ions, the repulsion between the ions would crack the material cleanly along a line. Essentially, once a shift or break in the lattice is started it will inevitably cascade along the line and crack the material. 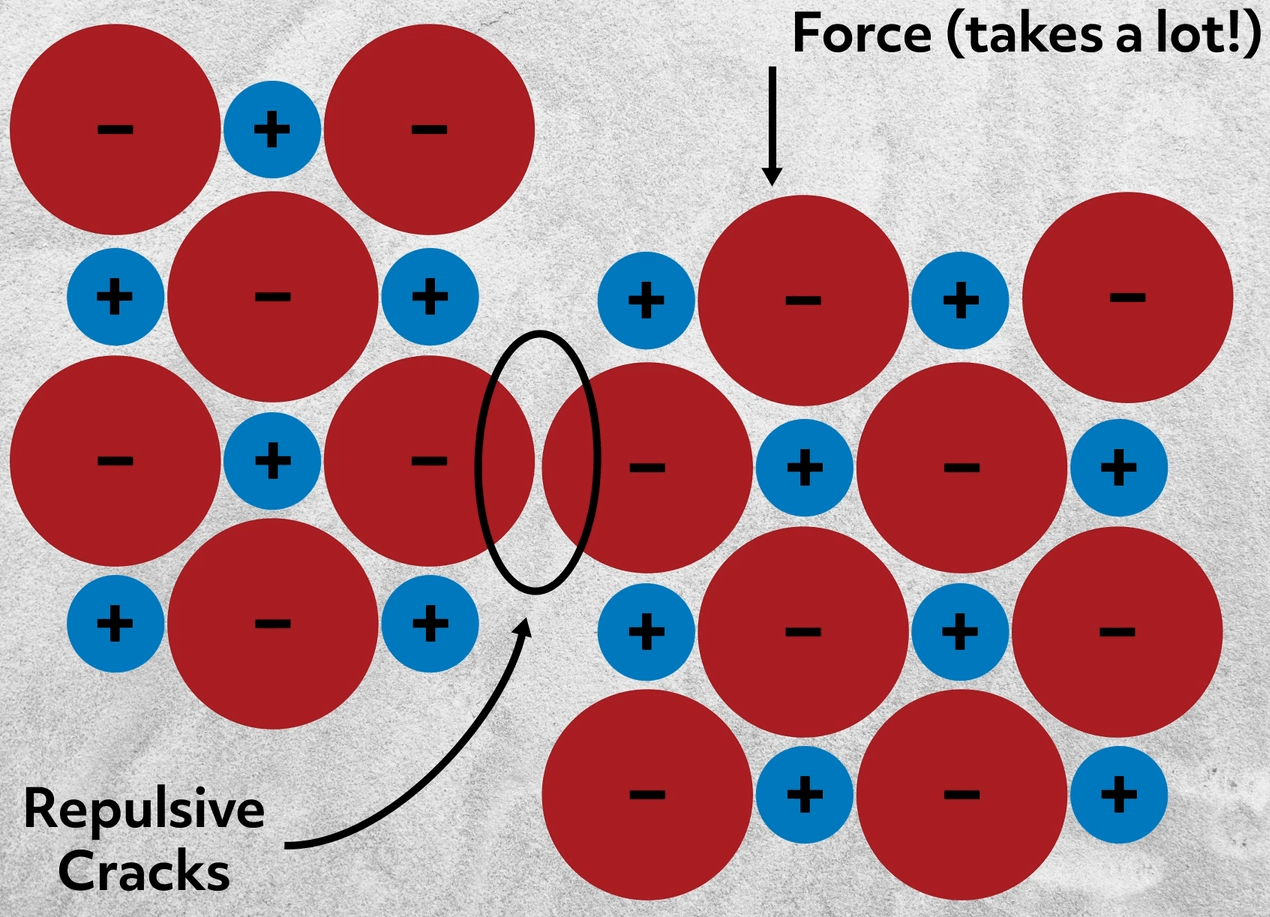 Ionic compounds have high melting points (for example, sodium chloride melts at 801 degrees C), which makes sense with the high lattice energy. When the solid melts, you lose all the organized interactions between oppositely charged ions. In other words, you’re losing the lattice energy- the thing that drives the formation of ionic compounds in the first place. It is also worth noting that, due to the free moving charged particles, liquid or dissolved ionic compounds are excellent conductors.

Alright, that’s it for today’s video on ionic bonds. Let’s wrap up with a quick review of what we’ve talked about. We started by thinking about bonding on a spectrum, with a reminder that the categories of covalent and ionic are on a continuum. We then jumped into the specifics of ionic bonds, pointing out that the two elements come from opposite sides of the periodic table and achieve noble gas electron configurations when bonded. As we went through examples, we used partial orbital diagrams to keep track of the electrons as well as the electron configurations. We pointed out that, while we started by describing single ionic bonds, these usually lead to ionic solids, which maximize the attractive interactions between ions. Lastly, we connected the properties of the individual bond to the bulk characteristics of ionic compounds- a good reminder that we can always connect what we observe on a macroscopic scale to what’s happening on a microscopic scale.