Even and Odd Functions

Let’s begin by talking about even functions. If a function \(f(x)\) evaluated at \(-x\) gives us the same \(f(x)\) we started with, that function is even. Formally written, when 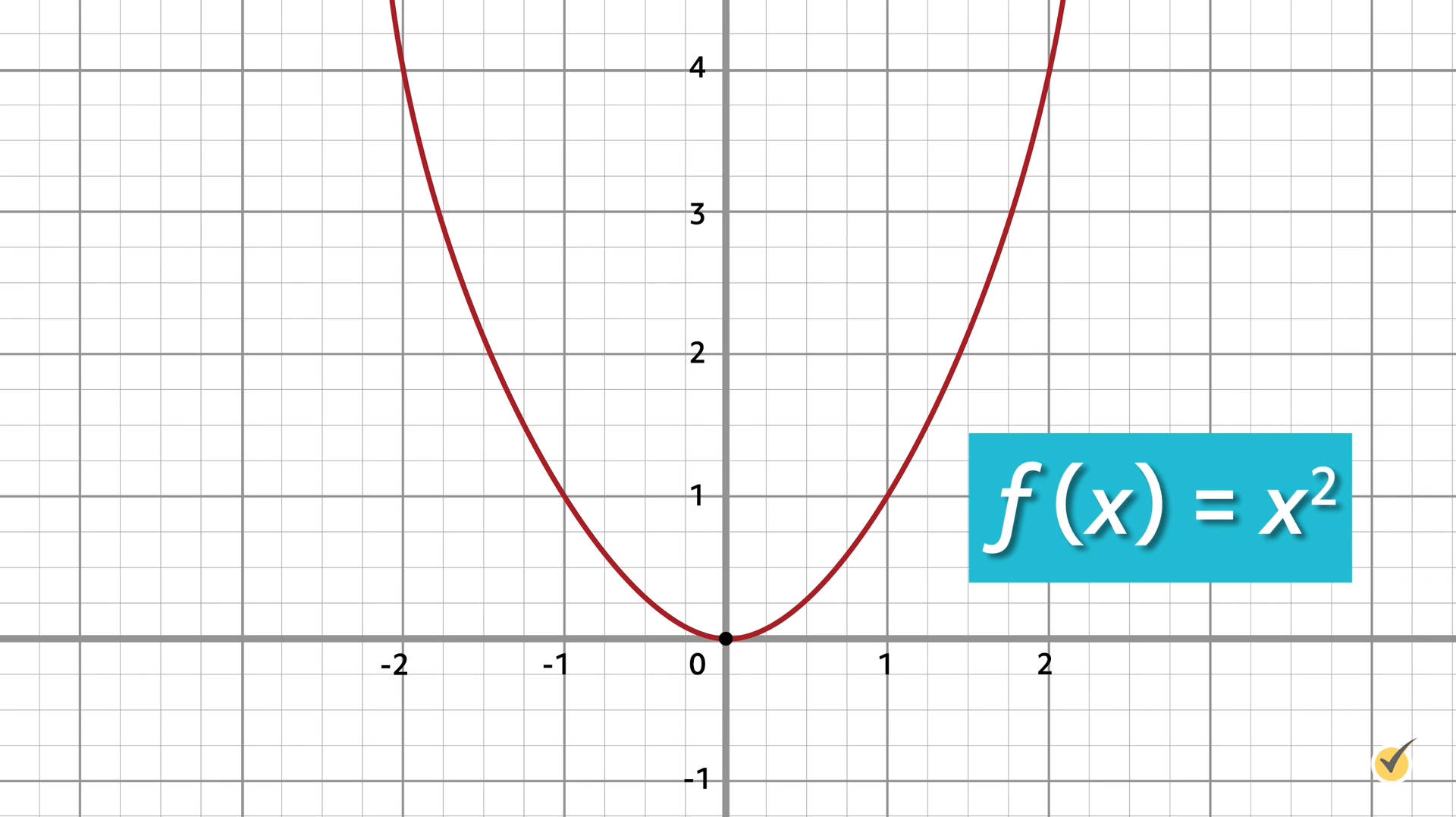 Notice that the shape of this familiar parabola is visibly symmetric. The left and right sides of the plane are identical, just flipped. We can also show that this function is even algebraically, by evaluating at \(-x\).

Which, when you square a negative, it turns positive, so this is equal to:

Notice that if we add a constant to this function, it won’t affect the shape of the function, just raise or lower it on the plane. For example, this is the graph of \(f(x)=x^{2}+1\). Notice how it still has the same shape, and it is still an even function. It has just been moved up one unit on the coordinate plane. 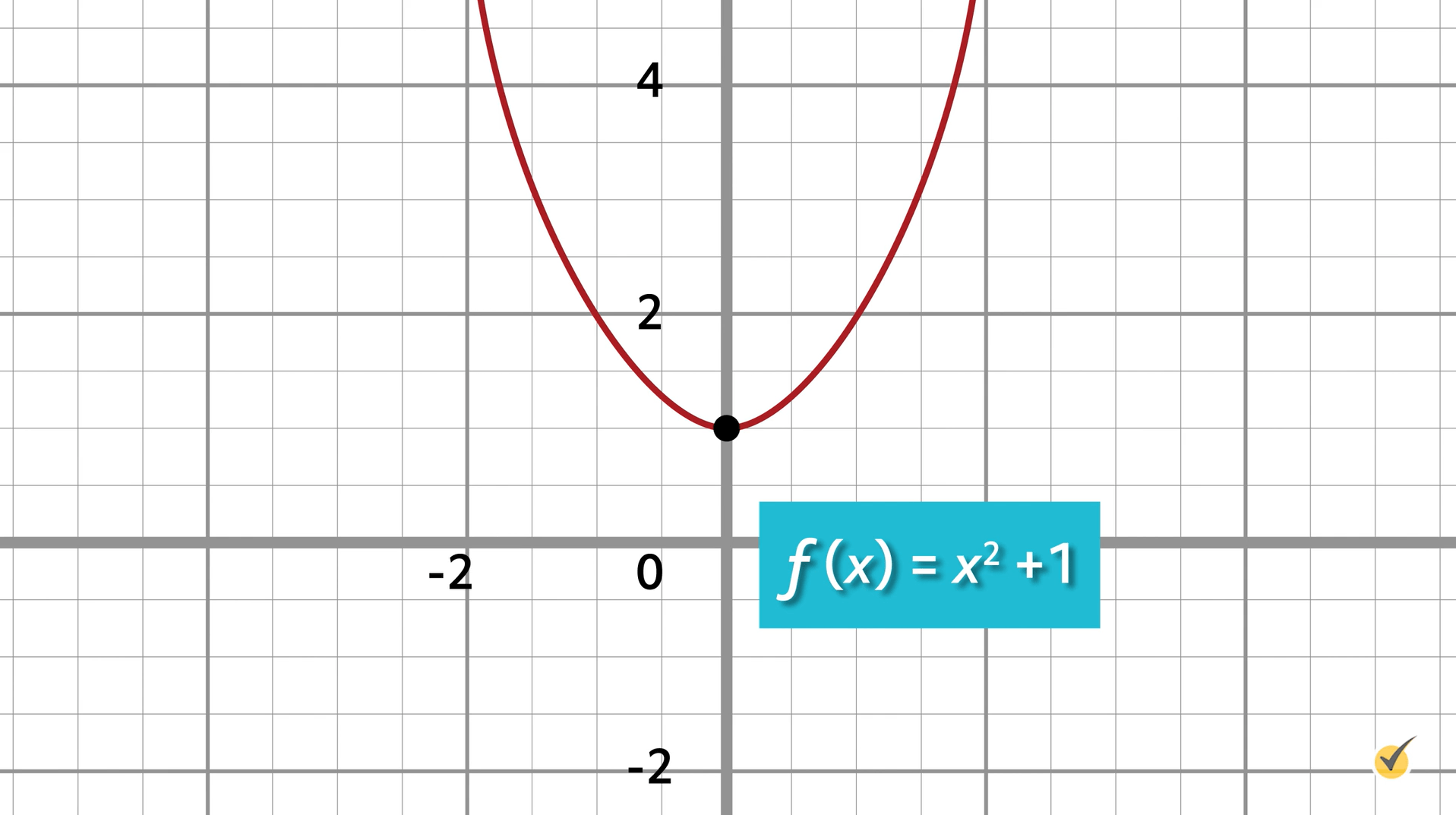 Graphically, an odd function will appear the same when we rotate it by 180°, like flipping a page upside down, and it must pass through the origin. A few examples of odd functions are:

So if you notice, \(f(x)\) is the opposite of \(f(-x)\). Each term, which in this case we only have one, is changed from positive to negative. So that means that this function is odd.

Notice that if we were to add a constant to this function, it would no longer be odd. Remember that for odd functions, every term must change signs when evaluating at \(-x\). That constant term would have no way to change sign, and we would see on the graph that the function would no longer pass through the origin.

So we have now talked about definitions of both even and odd functions but before we go further, it’s important to clarify that some functions may be neither even nor odd! For example, take a look at the function \(f(x)=(x+1)^{2}\). 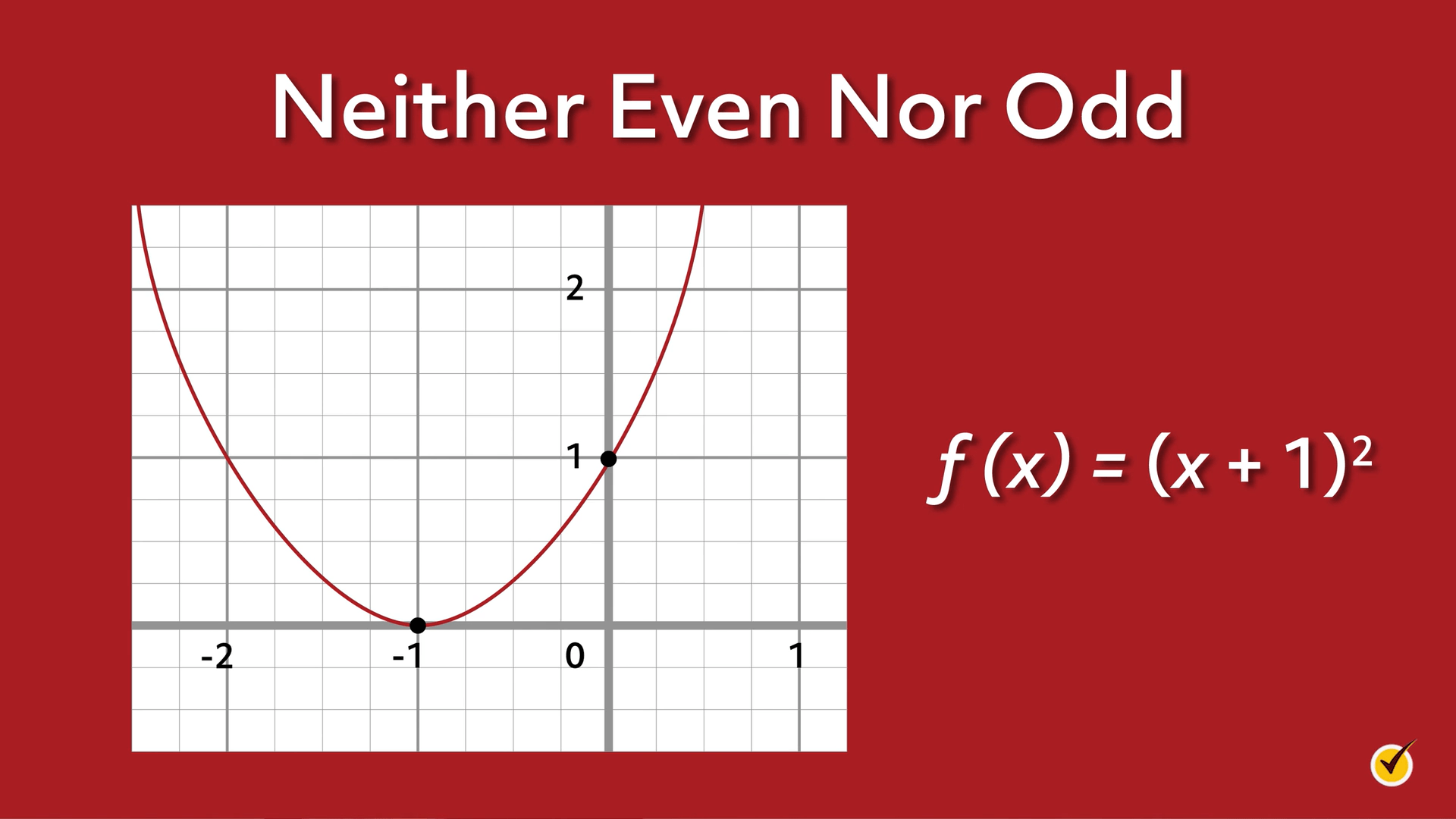 From the graph we can see that this function doesn’t pass through the origin, so it can’t be odd. And it isn’t symmetric about the \(y\)-axis, so it isn’t even either. But we can also determine this algebraically.

Which we can write as:

‘cause that’s what the squared means. And then from here we can FOIL.
So:

But remember, to determine even or odd, we have to compare this to our original function. So let’s expand that. So for this, we have:

Now, when we compare these two functions, we see that only one of the three terms ended up changing signs, so \(f(x)\) is not odd. And since one term did change sign, \(f(x)\neq f(-x)\), so the function is not even either.

Now that we’ve laid a groundwork for understanding even and odd functions, let’s talk about why we call them even and odd in the first place.

Remember that even functions are the same when we evaluate them at \(+x\) and at \(-x\). As we saw earlier, \(f(x)=x^{2}\) satisfies this property because anytime we square something, a positive value is returned, and therefore the sign of that term doesn’t change even if we plug a negative value in. The same is true when something is raised to the fourth power, or the sixth, and so on. Notice that constants do not change sign when we evaluate at \(-x\) either. That’s why we saw that the function \(f(x)=x^{2}+1\) was still even. As you can see, an even function will have even exponents.

It may be unsurprising now that odd functions likewise will have odd exponents! Remember that in order for a function to be odd, all terms must change sign when we evaluate at \(-x\).

You may recognize even and odd functions later on in calculus when it comes to dealing with the Taylor expansion.

Time for some practice problems!

Based on this graph, is this function even, odd, or neither? 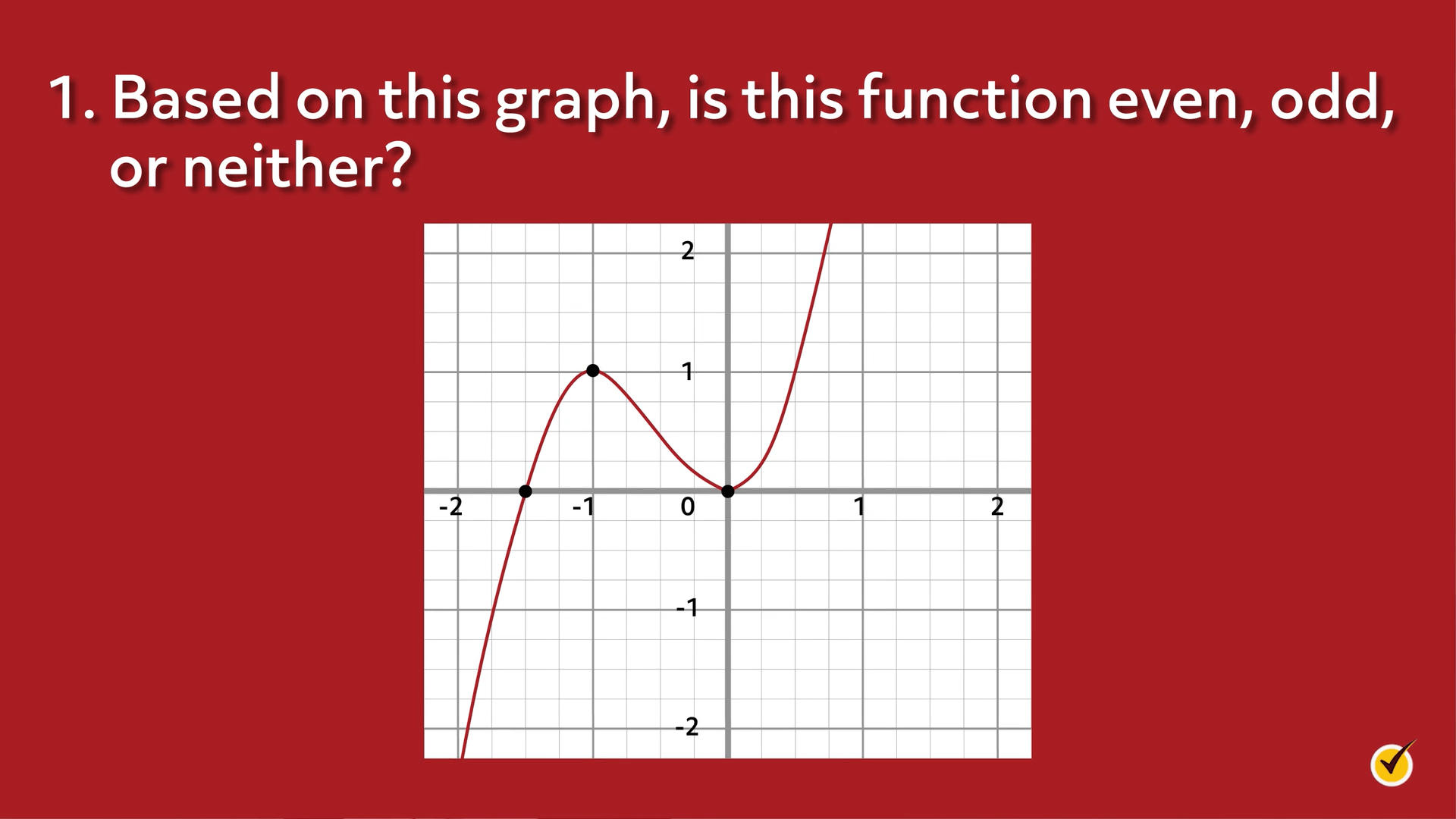 Neither. This function is not symmetric about the \(y\)-axis, so it is not even. And even though it passes through the origin, it is not odd either because it would not appear the same if we were to rotate the image 180°.

Let’s try another one.

We know that some functions may be neither even nor odd, but is it possible for a function to be both even and odd?

As a quick recap, we can identify even and odd functions in the following ways:

Algebraically, even functions are the same when we evaluate at \(+x\) and at \(-x\). Odd functions will change signs across all terms when evaluated at \(-x\).

Now that we’ve covered everything and run through some examples, you should be pretty comfortable with identifying even and odd functions.